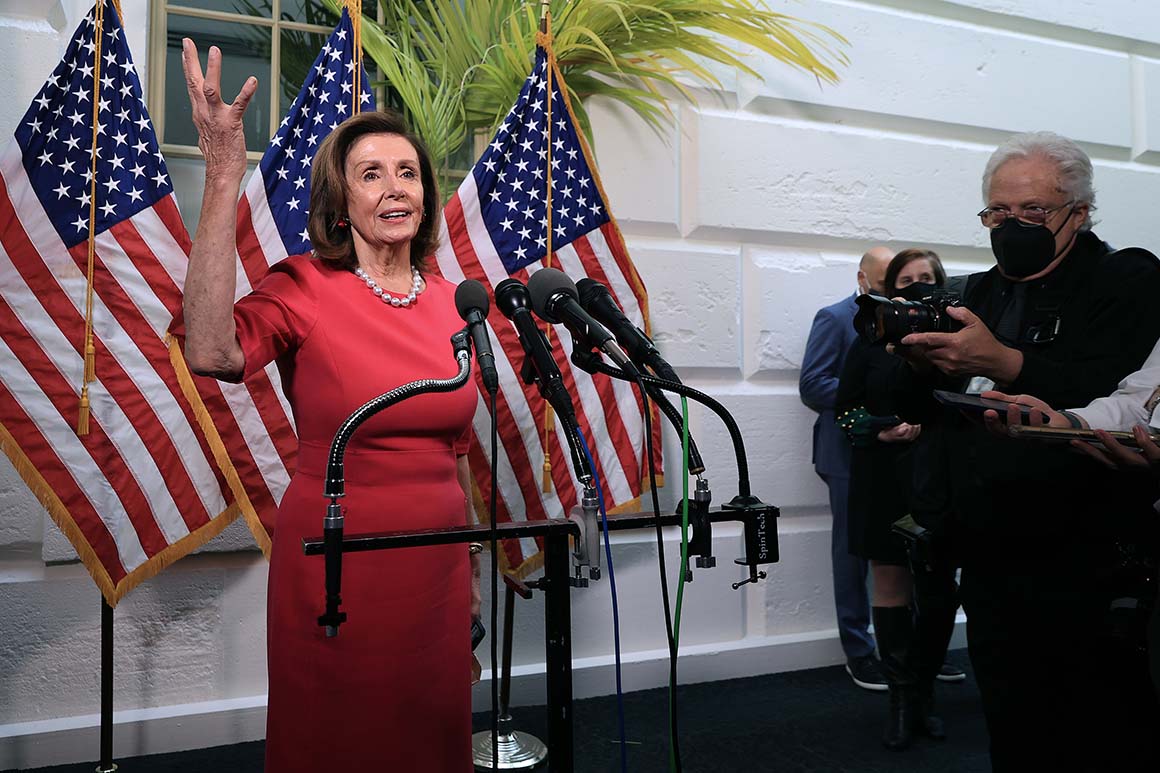 Several key progressives emerged from a closed-door meeting of House Democrats on Tuesday still vowing to tank President Joe Biden’s infrastructure bill without a firm commitment from party leaders on their spending priorities. And time is running out before that vote.

Many of those liberals are once again demanding specific assurances from the Senate’s most vocal centrists, ratcheting up the pressure on Biden for a pair of high-stakes meetings with Sens. Joe Manchin (D-W.V.) and Kyrsten Sinema (D-Ariz.) on Tuesday.

“My father told me when I was growing up, there’s a fine line between a good guy and a goddamn fool. I don’t want to be rolled,” said Rep. Jim McGovern (D-Mass.). “I think a lot of us want to make sure we have an assurance that, in fact, there’s going to be a reconciliation bill.”

“I’m not a yes until we have assurances that it will pass,” echoed Rep. Chuy Garcia (D-Ill.).

With just two days left for Speaker Nancy Pelosi to lock down progressive votes on the infrastructure bill, Biden’s sitdown with Manchin and Sinema could be pivotal. While Sinema has been engaging with a group of House lawmakers behind the scenes, Manchin has remained largely mum about his support for the party’s sprawling bill with a price tag of up to $3.5 trillion.

House Majority Leader Steny Hoyer (D-Md.) described an agreement with Manchin and Sinema as “critical” to resolving the deadlock in the House.

“I think it would give confidence to a lot of people in the House and around the country,” Hoyer told reporters Tuesday, reiterating that the House wouldn’t take up any social spending plan that the Senate couldn’t support.

“What we’re hoping this week is to get a number and a framework,” he added.

Pelosi and her leadership team — as well as progressive and moderate leaders — have been furiously working behind the scenes to come up with a compromise that all corners of the party can back. They hope that so-called “framework” would be enough for Rep. Pramila Jayapal (D-Wash.), the Congressional Progressive Caucus chief, to steer liberals to vote for the infrastructure bill, avoiding a humiliating defeat for leadership and the White House on Thursday.

Jayapal and other CPC leaders have kept tight-lipped about their plans since Pelosi stunned many in the caucus by announcing Monday night that the House would proceed with an infrastructure vote even as the party’s broader spending bill slipped past this week. Members of the CPC will meet for a virtual meeting Tuesday afternoon, where they will likely air some of those frustrations.

Pelosi’s decision to muscle ahead with infrastructure without the social spending bill in tow was essentially a reversal of the vow she made to progressives earlier this summer to pass both at the same time — a dynamic that will complicate leadership’s ability to lock down the votes before Thursday.

Asked about how Democrats would convince progressives to support that vote, Pelosi said: “That’s a question that we’ll deal with, but I’m not going to negotiate that right now.”

“We’ll see what we need to have and that is the essence of the Build Back Better,” Pelosi told reporters.

Democrats expect an intense whipping operation from Pelosi and her leadership team for the infrastructure plan, but it hasn’t formally begun yet. Many lawmakers have pegged their hopes on Biden nailing down a commitment from Manchin, thereby prying more progressive commitments loose.

“I haven’t started whipping anything yet,” House Majority Leader Jim Clyburn said in a brief interview.

Jayapal has said that dozens of progressives — as many as 60 — would be willing to block Biden’s infrastructure bill Thursday.

But there are others within the caucus who say they can’t go that far with the president’s agenda on the line.

“I’ve come to the conclusion that keeping things moving helps us, even though it’s got some risks that some folks will say, ‘Hey I got what I want, I won’t keep going,’” said Rep. Peter Welch (D-Vt.), alluding to many of his colleagues’ fears that Manchin and Sinema will ditch the broader spending talks as soon as the public works bill is complete.

House Democratic Caucus Chair Hakeem Jeffries projected confidence Tuesday that the caucus would be in lockstep behind Biden’s two priorities before the vote later this week.

“On substance the votes are there, in the context of what we’re trying to get accomplished,” Jeffries told reporters. “Now we’re figuring out the pathway to get both of these very important bills over the finish line.”