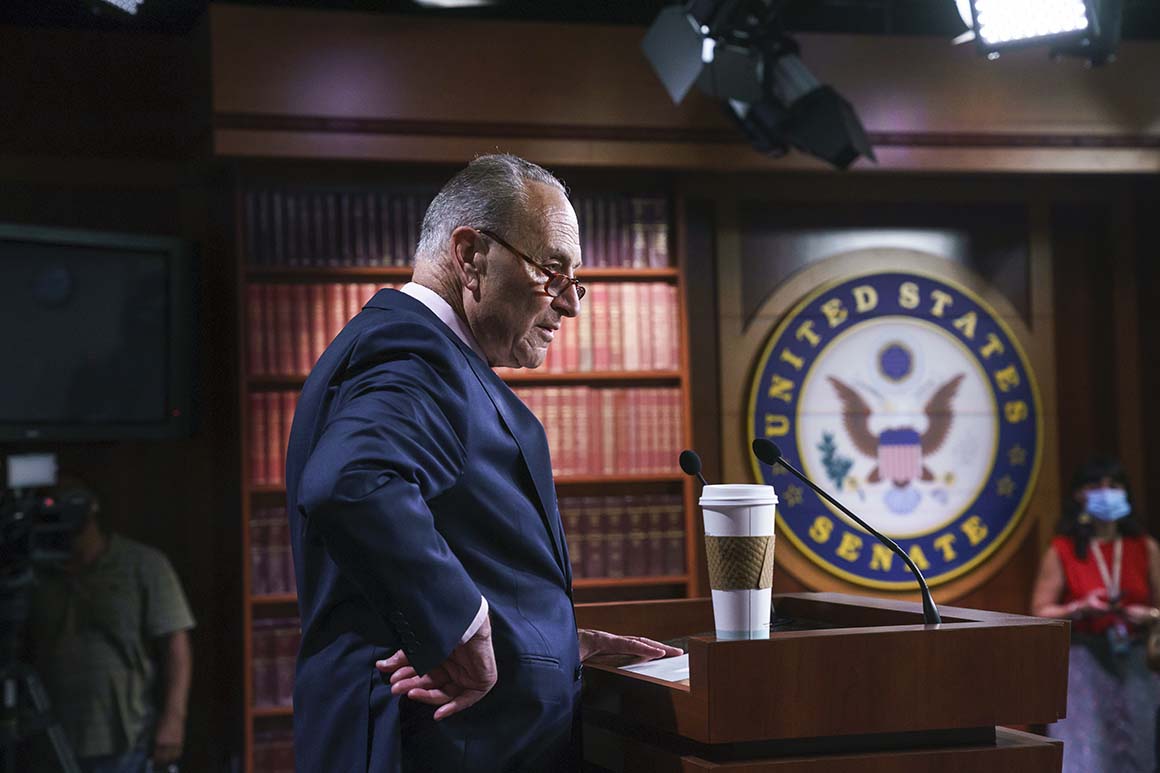 Chuck Schumer is brushing off Joe Manchin’s call for a “strategic pause” on Democrats’ spending agenda, vowing that the party will not slow its pursuit of a $3.5 trillion bill tackling climate change, tax policy and beefing up social programs.

“We’re moving full speed ahead,” Schumer told reporters on Wednesday morning. “We want to keep going forward. We think getting this done is so important for the American people.”

The Senate majority leader’s remarks signaled little public concern with Manchin’s hardline position against the $3.5 trillion target as Democrats push to finish the bill early this fall. Schumer has set a soft target of Sept. 15 for unveiling draft text, which will surely prompt a more vigorous discussion within the 50-member caucus about what, if anything, Democrats are willing to cut from their plan to satisfy moderates like Manchin.

Manchin last week published an op-ed urging his party to slow down its work on the bill it aims to pass along party lines using the budget reconciliation process, which can evade a GOP filibuster but will need every Democratic vote in a 50-50 Senate. Given his concerns about debt and inflation, Manchin wrote in the Wall Street Journal that he “won’t support a $3.5 trillion bill, or anywhere near that level of additional spending, without greater clarity.” Those comments followed a vow from Sen. Kyrsten Sinema (D-Ariz.) that she would not support $3.5 trillion.

Schumer conceded on Wednesday that moderate Democratic senators like Manchin and Sinema don’t see eye-to-eye with progressives like Bernie Sanders of Vermont and Elizabeth Warren of Massachusetts. Sanders sought as much as $6 trillion in spending and indicated on Wednesday he would not climb down any further: “That $3.5 trillion is already the result of a major, major compromise.”

Yet with Manchin and Sinema publicly resisting that figure and several other moderate Democrats not yet publicly committed to it, Schumer (D-N.Y.) is under pressure to concoct a compromise on a proposal that most in the party argue cannot be further slimmed. As envisioned now, the jobs and families plan will expand the safety net, take climate action, raise taxes on the wealthy and continue a child tax credit that’s been a linchpin of Democrats’ coronavirus stimulus bill. But those programs won’t last as long as Sanders and other liberals would like them to.

Schumer enjoys a close relationship with Manchin, and Democrats are not yet alarmed about their internal whip count after Schumer pushed through a $1.9 trillion coronavirus aid law as well as a $550 billion infrastructure bill with lockstep Democratic support. Describing Schumer’s approach, Sen. Tammy Duckworth (D-Ill.) said “he lets that messy process move forward with a real deadline, and he gets us to the end and he gets those votes from all of us.”

“We’re going to all come together to get something big done,” Schumer said Wednesday. “It’s our intention to have every part of the Biden plan in a big and robust way.”