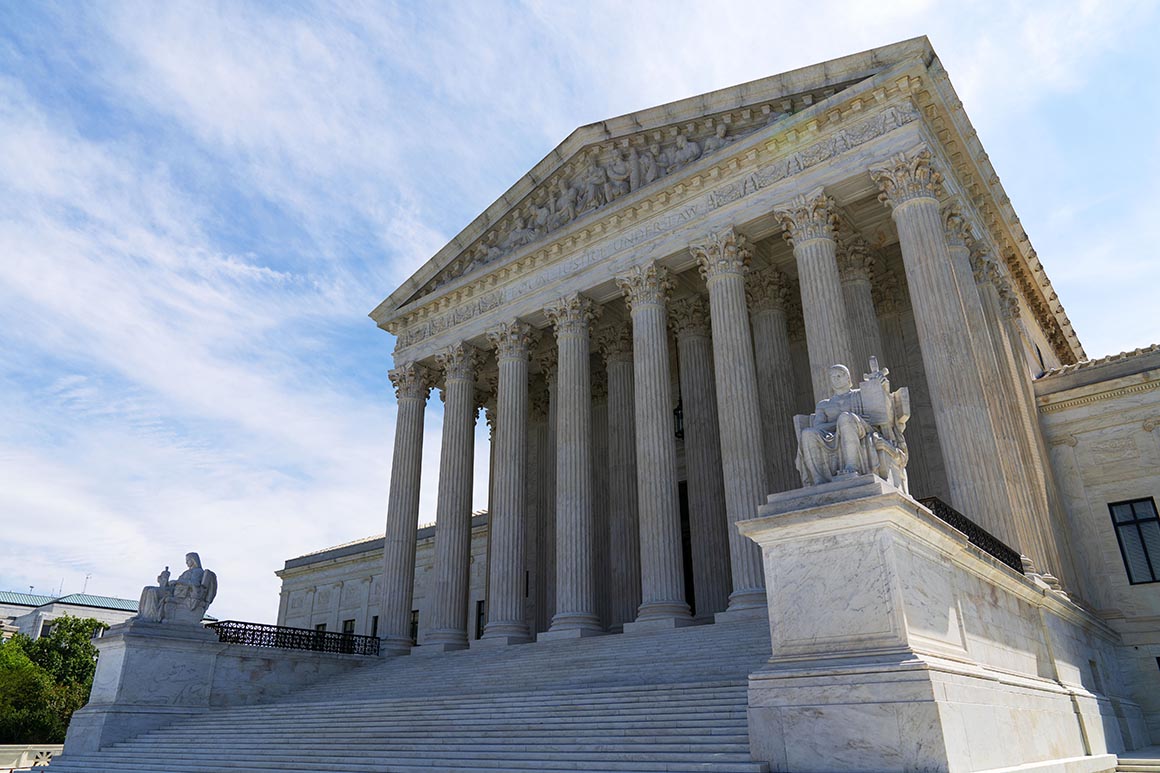 The Supreme Court early Wednesday let a Texas state law take effect that allows private citizens to sue to uphold a ban on the procedure after six weeks of pregnancy, potentially creating a new template for states to impose strict restrictions on the procedure.

The court’s decision to not act on an emergency petition from Texas abortion clinics comes as the justices prepare to more broadly reconsider the right to an abortion it established almost 50 years ago. In May, justices agreed to review Mississippi’s ban on the procedure after 15 weeks of pregnancy — a direct challenge to Roe v. Wade, the landmark 1973 decision that legalized abortion nationwide. Those arguments are expected later this year, with a ruling in 2022.

“This is a de facto overturning of Roe before the Supreme Court has time to hear the Mississippi case,” said Planned Parenthood President Alexis McGill Johnson. “And Texas will now go back to being a pre-Roe state, turning the clock back 50 years.”

Beyond outlawing abortion as early as six weeks into a pregnancy, the Texas law, signed in May, would deputize citizens to file civil suits against abortion providers or anyone who helps facilitate the procedure after six weeks, such as a person who drives a pregnant person to the clinic. Individuals found to have violated the law would have to pay $10,000 to the person who successfully brings such a suit — a bounty abortion rights advocates warn will encourage harassment, intimidation and vigilantism.

Anti-abortion groups in the state such as Texas Right to Life have in recent weeks set up tip lines for people to anonymously report violators, ahead of the law’s implementation. Earlier on Tuesday, the a federal district court issued a temporary restraining order barring the group from filing suits against a small group of individuals and organizations that assist patients in obtaining an abortion. But both sides of the case acknowledge the order is very narrow, and the anti-abortion group said it still plans to solicit tips and bring lawsuits against abortion providers now that courts have given a green light to the law’s implementation.

The group’s spokesperson Kimberlyn Schwartz told POLITICO that protesters have flooded their “whistleblower” website with phony tips in recent days, but claimed “they’ve been extremely easy to spot and filter out.” Schwartz said soliciting tips is just one of the ways they plan to enforce the state’s law, but declined to answer whether they also plan to physically monitor clinics.

“We’ll be on the lookout for illegal abortions that are happening,” she said. “We will see how the abortionists behave.”

McGill Johnson said Planned Parenthood’s clinics in Texas are already noticing an increase in surveillance in the lead up to the law’s implementation.

“As our providers are grappling with the logistical challenges of calling all their patients and telling them what they’ll be able to provide and helping them find places to access abortions out of state and secure funds for travel, they’re also getting a lot of incoming,” she said. “Sometimes it looks like people sitting in our parking lots taking down license plate numbers, and taking pictures.”

The groups challenging Texas’ law, including Planned Parenthood, the American Civil Liberties Union, had been hanging their hopes on the federal district court where they were seeking an order temporarily blocking implementation. Over the weekend, the 5th Circuit Court of Appeals intervened to cancel a planned hearing there, and on Monday the groups filed an emergency petition to the Supreme Court, arguing that the law is unconstitutional.

The high court, or a lower federal court, could still issue a stay in the coming days, halting enforcement of the law and allowing abortions after six weeks of pregnancy to resume.

Abortion rights groups plan to keep challenging the law on the merits, though they warn that millions of Texas women will lose access to the procedure as the case proceeds.

“Patients will have to travel out of state — in the middle of a pandemic — to receive constitutionally guaranteed health care,” Nancy Northup, the president and CEO of the Center for Reproductive Rights, said in a statement. “And many will not have the means to do so. It’s cruel, unconscionable, and unlawful.”

A fetal heartbeat usually can be detected around six weeks of pregnancy, when many women still don’t even know they are pregnant.

And while abortion rights advocates have touted the recent ability to dispense abortion pills via telemedicine and by mail as a way for people in conservative states to evade mounting restrictions on the procedure, the state on Tuesday also sent a ban on mail delivery of the pills to the governor’s desk.

Should the Supreme Court overturn or significantly curtail Roe next year, more states are expected to enact near total abortion bans similar to Texas’. Six-week bans enacted by at least a dozen states have all been blocked by courts until now. But the citizen enforcement scheme made the Texas law more difficult to challenge in court, and the Supreme Court’s decision to side, for now, against the clinics is likely to encourage copycat bills in other states.