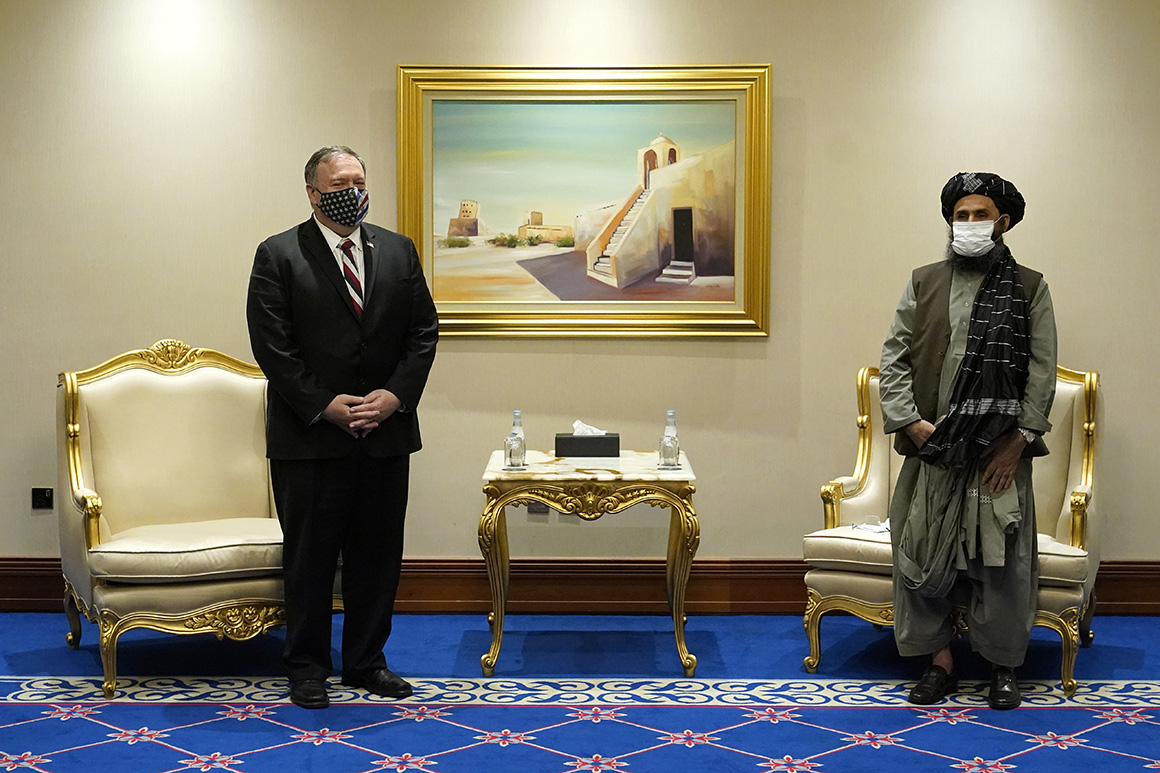 Donald Trump spent years arguing that America’s “endless wars” were draining the country of resources and lives. But in the aftermath of President Joe Biden’s withdrawal from Afghanistan, that’s changed.

The former president has privately sensed an opening to attack his successor for the chaotic and bloody situation on the ground there. And in a statement last week, he declared that if the Taliban didn’t return mostly defunct American military equipment, “we should either go in with unequivocal Military force and get it, or at least bomb the hell out of it.”

It was a shift for Trump. In other statements, he had boasted that he would have executed a more “dignified” withdrawal from the 20-year war, largely in the context of defending the deal that his administration struck that set the conditions for the U.S. to ultimately leave Afghanistan in May. The call for more military confrontation came, notably, at a time when other Republicans — including some who served in his administration — were airing criticism of that original deal, arguing that it was problematic in its own right and that the party would be well served to track another course.

The argument over who got it right and wrong on Afghanistan — alongside Trump’s embrace of a future need for military intervention there — is a key point of a larger debate now happening within the Republican Party; a debate over just what its foreign policy should be. And it is revealing a more complicated reality about the past five years: despite proclamations otherwise, there has never been an easily-defined Trump doctrine. Indeed, for the vast majority of Republicans, a definition remains elusive.

“I don’t think there is a Republican foreign policy or something that’s coherent in any real way,” said Shadi Hamid, a senior fellow at the Brookings Institution. “Biden’s withdrawal comes directly from Trump’s deal so this is a major legacy not just of Biden but of Trump, so I think that complicates the whole story.”

As Trump gears up for another presidential run, and as a host of other Republicans potentially join him, the desire to be the one to define the Trump foreign policy doctrine has grown more paramount. In the aftermath of Biden’s withdrawal, a parade of former Trump administration officials have appeared in op-ed pages and on television to defend their deal with the Taliban and Trump’s decision to get out of Afghanistan.

From the sidelines, Trump himself has reconvened aides from his own national security council. He’s talked with his former acting Director of National Intelligence Ric Grenell and former Secretary of State Mike Pompeo, among others, about the situation in Afghanistan. And, as the Washington Post reported, he’s placed calls to those family members who lost loved ones in the attack at the airport in Kabul during the closing days of the troop drawdown.

But while Trump’s taken on the posture of a president in exile, the hawks in the Republican Party have jumped at the opening to say that their worldview, not his, has been confirmed by the disastrous ending to the long war.

“Slogans are not philosophies and bumper stickers are not doctrines,” said Trump national security adviser-turned-critic John Bolton. “There is no Trump doctrine because he can’t think consistently enough to create one, it’s a series of knee-jerk reactions. I think the party’s reaction generally to the withdrawal from Afghanistan shows that the parties are actually coming back into their pre-Trump alignments on national security policy.”

When Trump ran for president in 2016, it was under the banner of “America first.” The premise was simple: Instead of spending money on foreign interventions, the country would be better served by spending it at home. Trump campaigned on withdrawing from long-standing alliances in the name of national interest, and military or economic intervention only when it directly benefited the American people. He firmly cast himself as the antithesis of George W. Bush’s neoconservative approach.

But it wasn’t so simple. In fact, Trump had briefly supported the 2003 invasion of Iraq. And, when he did take office, his foreign policy was often seen as unpredictable and disjointed to both enemies and allies abroad.

Trump helped normalize relations between Israel and Arab states in the region, pulled U.S. forces out of Syria, and pushed regularly for troop reductions in places like South Korea. But he also involved the military elsewhere, carrying out a missile strike to punish Syrian leader Bashar al-Assad for his use of chemical weapons on civilians, assassinating Iranian Maj. Gen. Qassem Soleimani, and vetoing a measure to end U.S. involvement in the war in Yemen. He conducted a highly personalized diplomatic mission to stop North Korea from advancing its nuclear weapons program but also withdrew from the nuclear deal with Iran in favor of a “maximum pressure” campaign aimed at squeezing the Iranian economy.

In Afghanistan, Trump was persistent in his efforts to pull troops out of the country and signed a conditional peace agreement in 2020 with the Taliban that had U.S. troops leaving by May 2021. His commitment to do so drew backlash from Republicans and sparked an uproar among aides, especially over his idea to invite the Taliban to Camp David in 2019 for negotiations, a plan that was ultimately shelved. When Biden announced that he would be removing the troops by a later deadline (Sept. 11), Trump praised the outcome but criticized the date.

When the withdrawal proved more calamitous than anticipated, former Trump officials tried to defend their involvement. Pompeo went on a media tour attacking Biden, while at the same time defending the concessions made to the Taliban. Former Vice President Mike Pence defended Trump’s deal and wrote in the Wall Street Journal that Biden “embarrassed America on the world stage.” And House Minority Leader Kevin McCarthy and former Trump national security adviser Robert O’Brien defended the Trump administration’s decision to pull troops out of Afghanistan in a lengthy interview at the Richard Nixon Library & Museum.

But others from the Trump administration have argued that the drawdown should serve as an inflection point about whether Trumpism on the global stage was the right approach.

Former U.N. Ambassador Nikki Haley declared that “negotiating with the Taliban is like dealing with the devil,” before drawing a distinction between Trump and Biden doing it. Trump’s Defense Secretary Mark Esper said the former president “undermined” his deal with the Taliban by rushing to pull troops out without making sure the Taliban lived up to their end of the contract. And Chris Miller, Esper’s successor, told Defense One that the deal was just a way to put pressure on the Taliban — and eventually maintain a small military presence in the country as terrorist fighters — but that never played out after Trump’s loss.

When asked about divides in the Republican Party and how he would define the Trump doctrine post-Afghanistan, one of Trump’s national security advisers H.R. McMaster pointed to an essay he wrote for Foreign Policy that said that “retrenchment may hold emotional appeal for Americans tired of protracted military commitments abroad, but blind adherence to an orthodoxy based on emotion rather than reason would make Americans less safe and put the United States further in the red.”

The divisions within the broader GOP have been obscured, in large part, by a mutually agreed-upon conclusion that Biden should first be held to account for how the war ended. But when that moment ends, the infighting could have a profound impact — effectively determining whether the shift in approach that Trump pledged to usher in can be sustained into future presidencies. Inside Trump’s own circle, it’s become clear that his legacy is on the line, in addition to the foreign policy path that the party he hopes to lead now takes.

“Perhaps this is at risk of overstating the significance — but the challenge to U.S. national security that will be posed by the events of the past six weeks in Afghanistan is going to be generational,” reflected one Trump senior administration official. “It’s going to be a massive problem.”