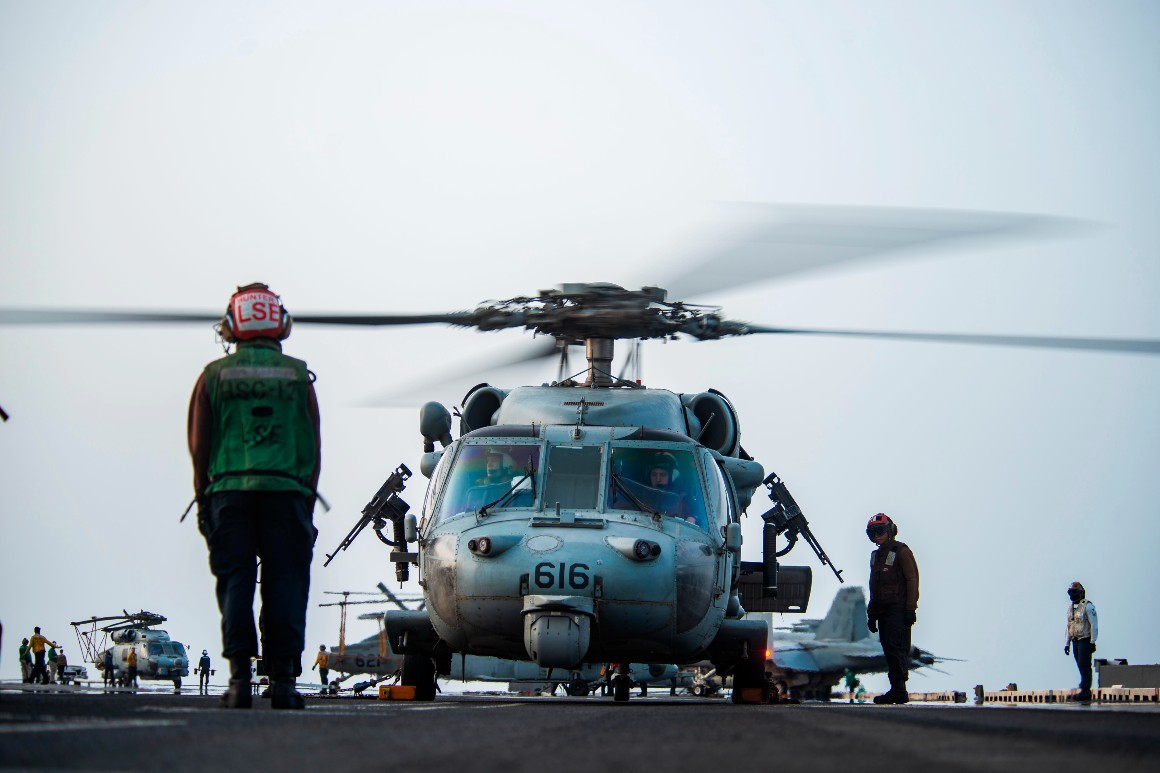 The American military’s involvement in Afghanistan could soon become largely the Navy’s responsibility, an ironic twist for a counterterrorism mission in a landlocked country.

Although the Navy has long privately bristled at the requirement to deploy one or even two aircraft carriers at a time to the Arabian Sea and Persian Gulf to support the ground fights in Afghanistan, Iraq and Syria, the lack of U.S.-controlled airfields near Afghanistan could mean more planes taking off from decks at sea.

And that could set off a fresh round of requests for more funding — and more hand-wringing among those who want the U.S. military to focus more on China.

“I think a lot of that mission is going to fall on the Navy,” said a Navy official who requested to speak on the condition of anonymity because the Pentagon’s plans have yet to be finalized. “This is a great example of why we need more money to operate forward — things like this are what we’re built to do, but we need the funding and support to keep doing it, and that hasn’t always been there.”

Worried about the reemergence of ISIS-K, or an emboldened al Qaeda in Afghanistan, the Biden administration has pledged to continue to launch “over the horizon” airstrikes from drones and manned aircraft. But it has yet to detail a plan for how those aircraft will collect intelligence on targets, or conduct sustained missions from such great distances.

Air Force pilots flying from the Al Udeid Air Base in Qatar or Al Dhafra in the United Arab Emirates have for years hit targets in Afghanistan, but they first have to wind their way through the Gulf around Iran, and back up through Pakistan, refueling at least once and often spending hours in the air before circling over a target.

“Land-based fighters in Qatar or Kuwait may not have the time on station to do close-air support missions for special operations forces,” said Bryan Clark, a former Navy officer now at the Hudson Institute. He said that could lead to the use of more long-loitering drones, and Navy aircraft flown from the North Arabian Sea.

Parking a carrier in the North Arabian Sea cuts some of that flight time, and allows pilots to fly over Pakistan before entering Afghanistan’s air space.

But those deployments mean wear and tear on crews and ships, and also require pulling assets from the Pacific, where the Biden administration says Washington’s true strategic interests lie.

That tension is on full display now. The Japan-based aircraft carrier USS Ronald Reagan flew F/A-18 Hornets over Kabul during the evacuation operation last month, and remains in the North Arabian Sea alongside the USS Iwo Jima, which launched the 24th Marine Expeditionary Unit into Kabul at the same time.

For decades, the U.S. has based an aircraft carrier in Japan to project U.S. power in the Pacific on a consistent basis. The call to send the Reagan to the Middle East this spring raised hackles among China hawks as it left the entire Pacific region without a fully operational aircraft carrier for the entire summer.

Reagan’s absence was perhaps felt most acutely in June, when a large Russian naval task force — the biggest since the end of the Cold War, according to Moscow — edged uncomfortably close to Hawaii, leading the U.S. to scramble F-22s from Pearl Harbor to intercept bombers accompanying the flotilla.

At the time, the Reagan was in the Indian Ocean heading for its Afghanistan mission, and the USS Carl Vinson was still undergoing predeployment drills near Hawaii, practicing launching F-35s for the first time.

The Reagan took over the Middle East mission from the USS Dwight D. Eisenhower, allowing the ship to finally head home to Virginia after back-to-back deployments that kept it at sea for over 300 of the previous 500 days.

“They were supposed to remain in the Mediterranean and the North Atlantic, but they ended up spending most of their deployment in the Middle East,” 2nd Fleet commander Vice Adm. Andrew Lewis told reporters when Eisenhower finally made it home in July.

“The Navy needs to get out from under that weight” of grinding deployments to the Middle East, Bryan Clark said. The Reagan will “likely remain there until relieved since the U.S. is now mounting counterterrorism operations in Afghanistan and [drones] may not work for all situations.”

It won’t just be manned aircraft pulled into whatever continuing surveillance and strike missions deemed necessary by the Biden administration, however. Drones will undoubtedly play a significant role, and the relatively limited number of advanced, long-loitering aircraft available at any given time could also pull from the Indo-Pacific Command.

“Most of the airpower that we’ll employ in Afghanistan is going to be unmanned, and my guess is that demand on these assets will go through the roof,” said Bryan McGrath, a former destroyer captain and managing director of the FerryBridge Group consulting firm. That increased demand is unlikely to “make things any easier for the [intelligence and surveillance] tasks necessary for keeping track of the Chinese navy.”

Whatever form the continuing air war in Afghanistan looks like, it will set off rounds of new budgetary requests for the Air Force and Navy, most likely.

“You’re going to hear the Air Force say they’re tied down and they don’t have enough tankers” to refuel planes on long missions, said Brent Sadler, a retired Navy officer at the Heritage Foundation. “So give it to the Navy and let us build more fighters, because we need more fighters.”

On the other hand, “the Navy’s gonna say, ‘we’ll do it, but you’ve got to buy more aircraft carriers.’ So they’re both going to look at it as a chance to buy more stuff.”

In the end, there are only so many carriers available, and these extended deployments have led to longer maintenance periods, which have impacted carrier deployments across the globe.

That material cost “is unlikely to stop [U.S. Central Command] from requesting to have a carrier in the region for over-the-horizon capabilities,” said Becca Wasser at the Center for a New American Security.

For decades, commanders across the Pentagon’s geographic commands have asked for, and received, aircraft carriers to shadow their coastlines, and DoD leadership and the Navy have rarely said no. If the Biden administration stays focused on hunting down ISIS-K and al Qaeda fighters in Afghanistan, that’s unlikely to change in Central Command, even without U.S. troops to support in Afghanistan.

The Navy is getting some help, however. The new British carrier, HMS Queen Elizabeth, is on her maiden cruise through the Pacific, stacked with F-35s flown by British and U.S. Marine pilots. This fall, Navy F-35 pilots will also start flying from a Japanese helicopter carrier, and in 2022 the new $13 billion aircraft carrier USS Gerald R. Ford will deploy for the first time.

With more platforms will undoubtedly come more missions, and more requests. And if the past is prologue, those requests will get the green light.