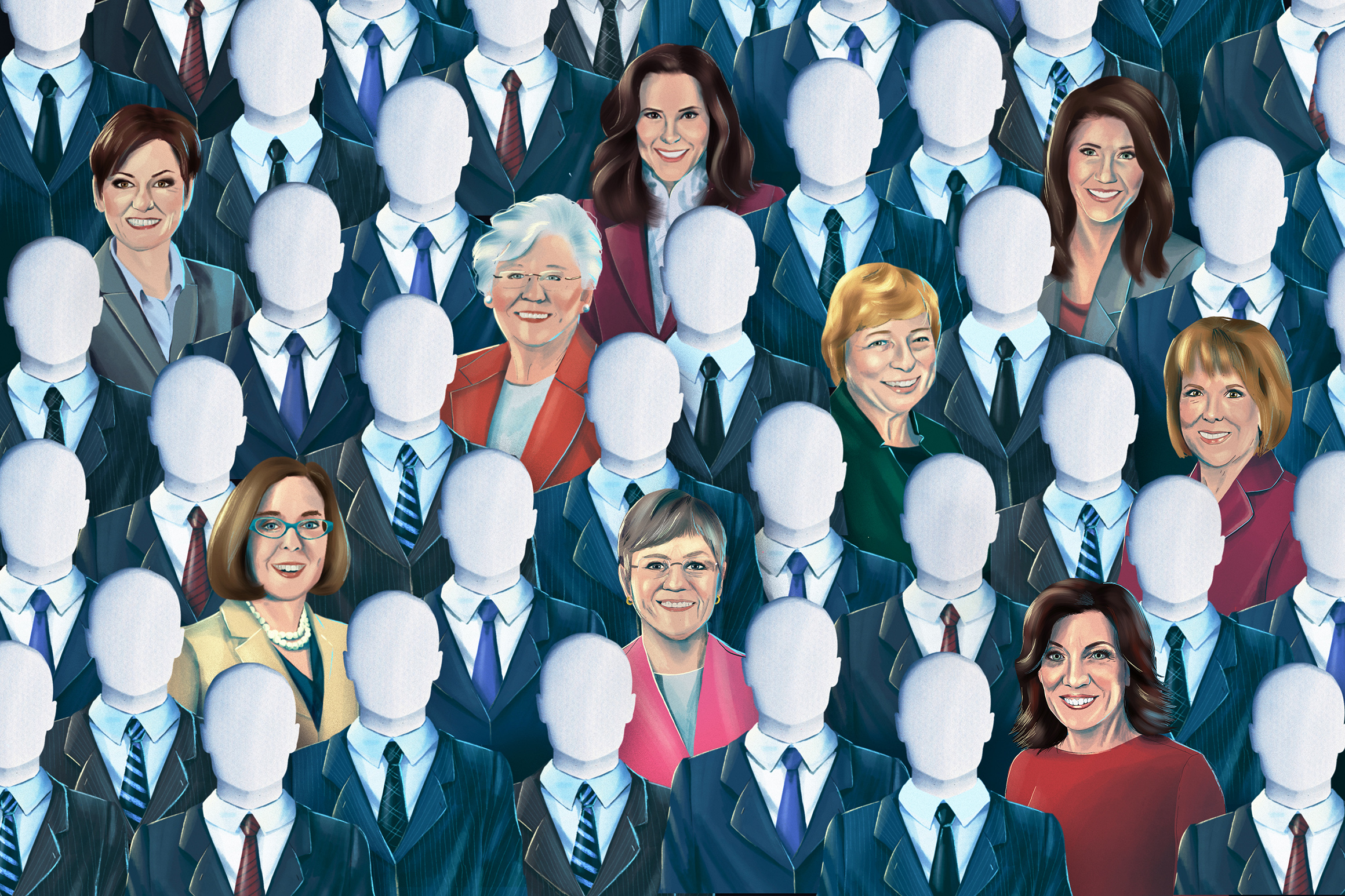 Before she was elected to the Kansas state Senate and before she was elected governor, Laura Kelly needed a nudge to run. Both times she got it from a friend, neighbor and fellow rare woman in politics: Kathleen Sebelius, a former Kansas governor herself and secretary of Health and Human Services in the Obama administration.

It was the whisper network at work. The not-so-secret support system has put thousands of women in power at every level of government, slowly changing the face of a profession once the sole domain of men. But for all its successes — women now account for a third of state lawmakers, more than a quarter of the U.S. House of Representatives and nearly as much of the Senate — women in many states have yet to shatter the highest glass ceiling: the governorships.

Today, just nine women hold the title, with power split among six Democrats and three Republicans. Four of those women took over the role by succession, most recently in New York, where Kathy Hochul became the state’s first female governor in August after Andrew Cuomo resigned over sexual harassment allegations. 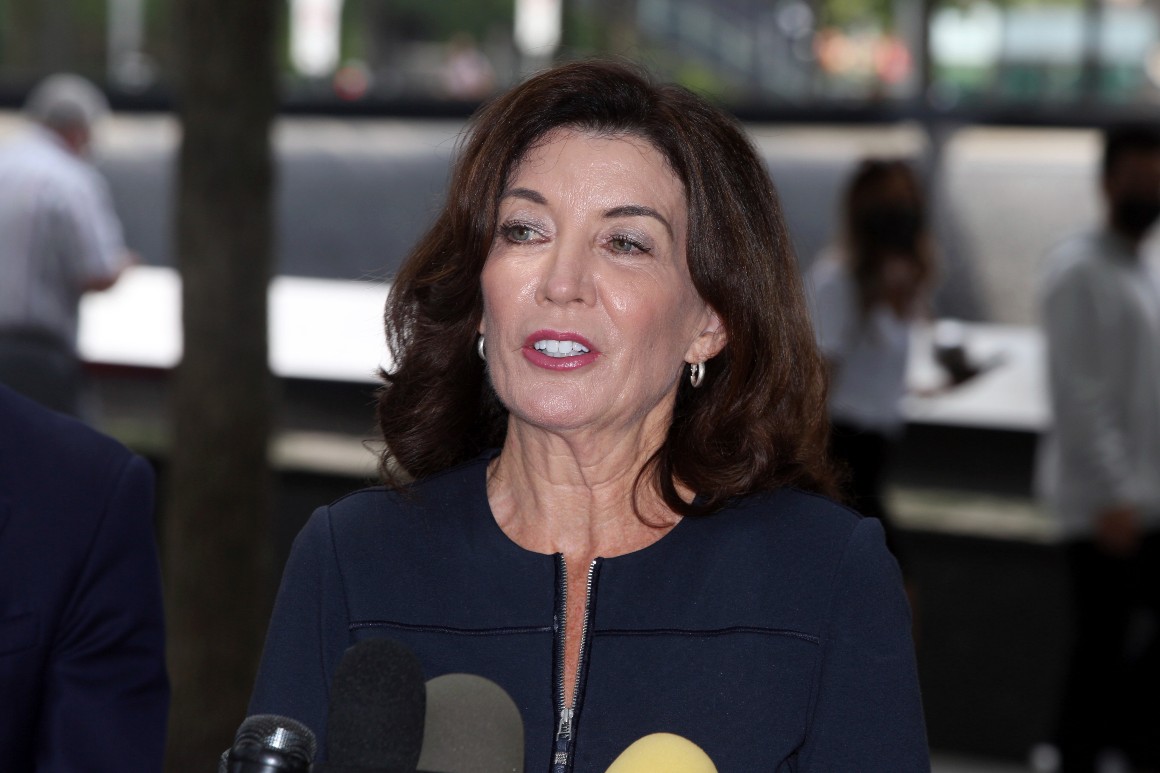 Now there’s growing urgency among leaders in both major parties around bolstering the chances of women running in the 2022 gubernatorial elections, when voters in 36 states will pick their next state executive. The nation could be left with fewer female governors if vulnerable Democratic women don’t hang onto their seats and Republicans fail to pick up power in multiple states where women are expected to be on the ballot.

Whatever happens hinges on whether both parties follow through on their pledges to recruit more women to run for statewide office — and whether that whisper network can give the final nudge.

“Women who decide to run have to work very hard at convincing people that they are tough enough to deal with the complexities of the job and balance that out with not appearing to be too aggressive, because that tends to turn people off too,” Kelly, a Democrat, said in an interview. “It’s a real balancing act and not an easy one. You just don’t have a whole lot of people out there who want to put themselves in that position.”

The struggle across parties for women to rise to the top within states speaks to the inherent bias against women that persists in politics. Research shows that women have to be more likeable, raise more money and generally work harder than their male counterparts in order to win. That’s why both the Democratic and Republican parties have vowed to invest more money and resources into supporting women gunning for governor in 2022.

But their strategies differ. Democrats tend to be more explicit with their dollars and messaging about the importance of electing women while Republicans take a more subtle approach that’s still similarly focused on building a pipeline of qualified women holding federal and state-level positions.

Some of the most vulnerable Democratic governors also happen to be women. Kelly is one of them. Republicans have flagged Kansas, where nearly two thirds of voters voted Republican in the 2020 presidential race, as a pickup opportunity and she’s bracing for a bruising reelection fight.

That’s why the Democratic Governors Association is pouring more dollars into a fund that supports female Democratic gubernatorial candidates. This year, the Women Governors Fund has a fundraising goal of $5 million — five times what it raised at its inception in 2018 — and will be overseen by Brown and New Mexico Gov. Michelle Lujan Grisham. The two will travel the country and lead fundraisers for the fund.

But the fund has limits. It can only be used to support women who make it out of their primaries, and $5 million doesn’t go very far in the campaign finance world, especially as it gets more expensive to run with every cycle. The cost of the 2018 Oregon governor’s race that Brown won in 2018, for example, exceeded $37 million, approximately double the previous record of $18 million set in 2010 by Democrat John Kitzhaber and Republican Chris Dudley.

“We have several extremely talented, very hardworking female incumbents that we need to reelect,” Brown, who has served as Oregon’s governor since 2015, said in an interview. “I’m hoping that we will be able to increase our numbers.” 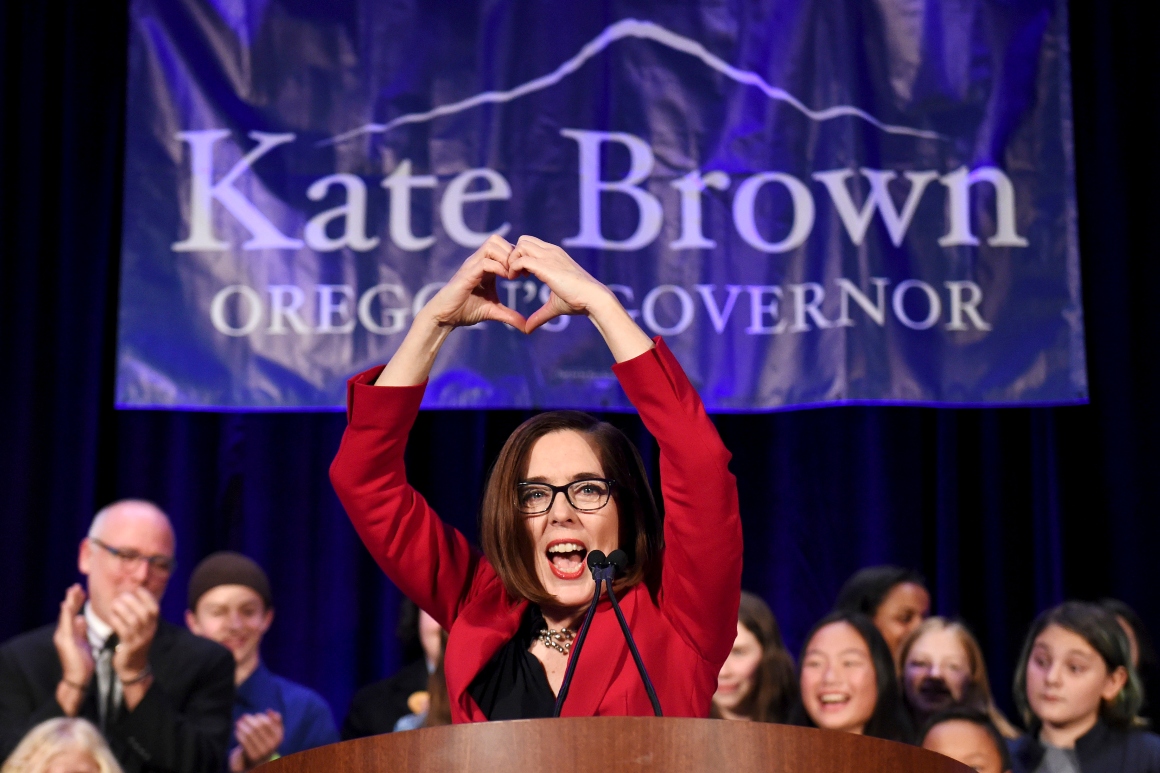 Brown, who is the second woman to serve as Oregon’s governor, said she’s had multiple conversations with women mulling runs, like Jennifer McClellan, who lost this year’s Virginia primary to former Gov. Terry McAuliffe, and Nellie Gorbea, who is running for governor in Rhode Island.

When she was a caucus leader in the Oregon Legislature, Brown said, “Women used to say to me, ‘I’m not qualified, I’ve got too much on my plate.’ And men just wake up and run for Congress without any preparedness. I say that to be funny, but there is some level of truth to that.”

There have long been institutional barriers that have held women back in politics. But politicians and strategists contend part of the reason why women remain so underrepresented in governor’s mansions is that they are more likely to see themselves fitting into state or federal legislatures — a job that requires cooperation and consensus — rather than as a top executive acting unilaterally.

A woman, of course, has never been elected president. And that mindset may also be reflected by the paltry number of female Fortune 500 CEOs: Just 8.1 percent, or 41 out of the 500 biggest businesses are run by women, and that’s a record high.

Forty-four women have served as governors in the U.S., according to data from the Center for American Women in Politics at Rutgers University. Thirty were first elected in their own right; three replaced their husbands and 11 became governor by constitutional succession, six of whom then later won full terms. Nineteen states have never had a woman governor.

Many women became governors because of extenuating circumstances rather than outright winning, like Hochul in New York.

There’s also a long history of women stepping into the role to fill in for their deceased husbands. The first woman governor was Nellie Tayloe Ross, a Democrat from Wyoming, who won a special election to replace her husband in 1925. Ross remains the only woman to ever serve as governor of Wyoming. 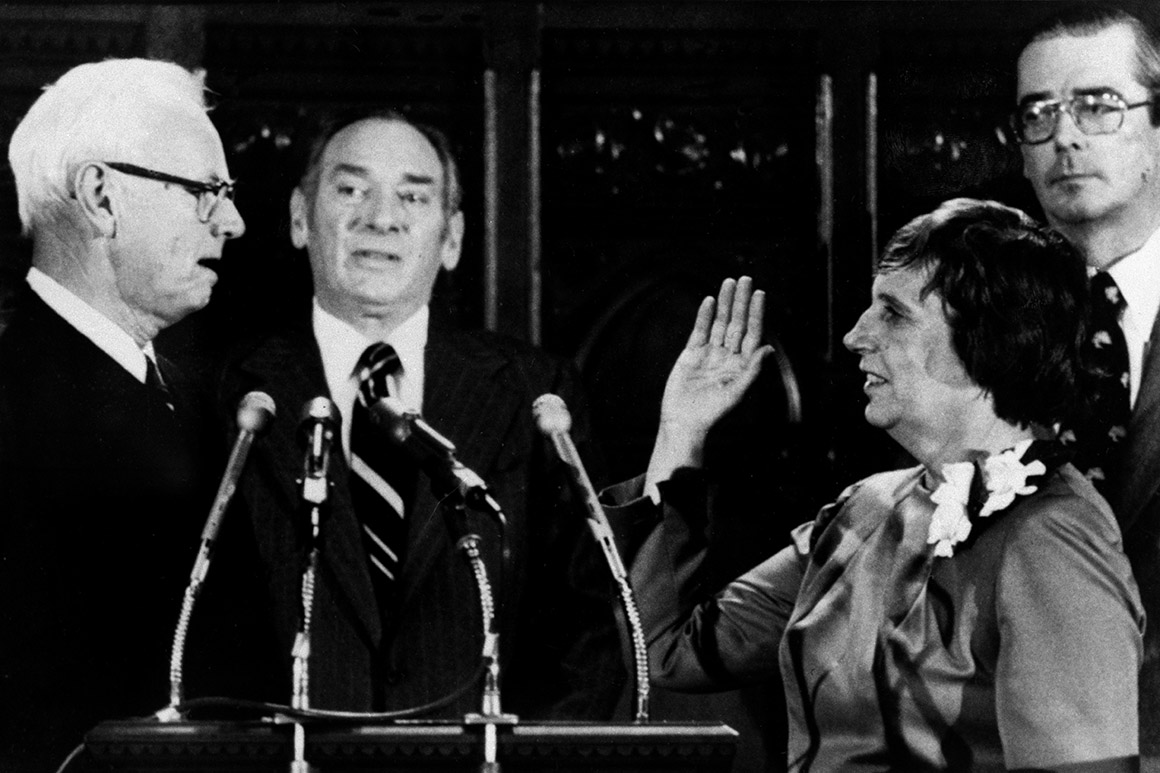 It wasn’t until 1975 that a woman was elected governor: Ella Grasso, a Democrat from Connecticut.

The record number of women serving simultaneously is nine, and was first achieved in 2004 and again this year. Of the current governors, seven are white women. Neither a Black woman nor a Native American woman has ever been elected governor.

Recently, there’s been an uptick in women being elected to statewide office, which Democratic groups credit to years of work recruiting and supporting women interested in politics. Typically, women are far more likely to run as Democrats than as Republicans.

“It was not just a flash in the pan, we see that as a sea change and a moment we can build upon,” said Jessica Mackler, vice president of federal and gubernatorial campaigns at EMILY’s List, which works to elect women who support abortion rights. EMILY’s List is looking toward 2022 by “continuing to invest in the rising stars that will be the candidates for governor and other offices.”

She added that they’re excited about opportunities in Arizona, a state where multiple women on both sides of the aisle have declared gubernatorial runs, and Georgia, where Stacey Abrams may make a second attempt after losing by 1.4 percentage points in 2018.

Republican operatives say they’re equally serious about recruiting women for office as Democrats. And 2020 was a banner year for the party: Two-thirds of the 27 newly elected female House members were Republicans. 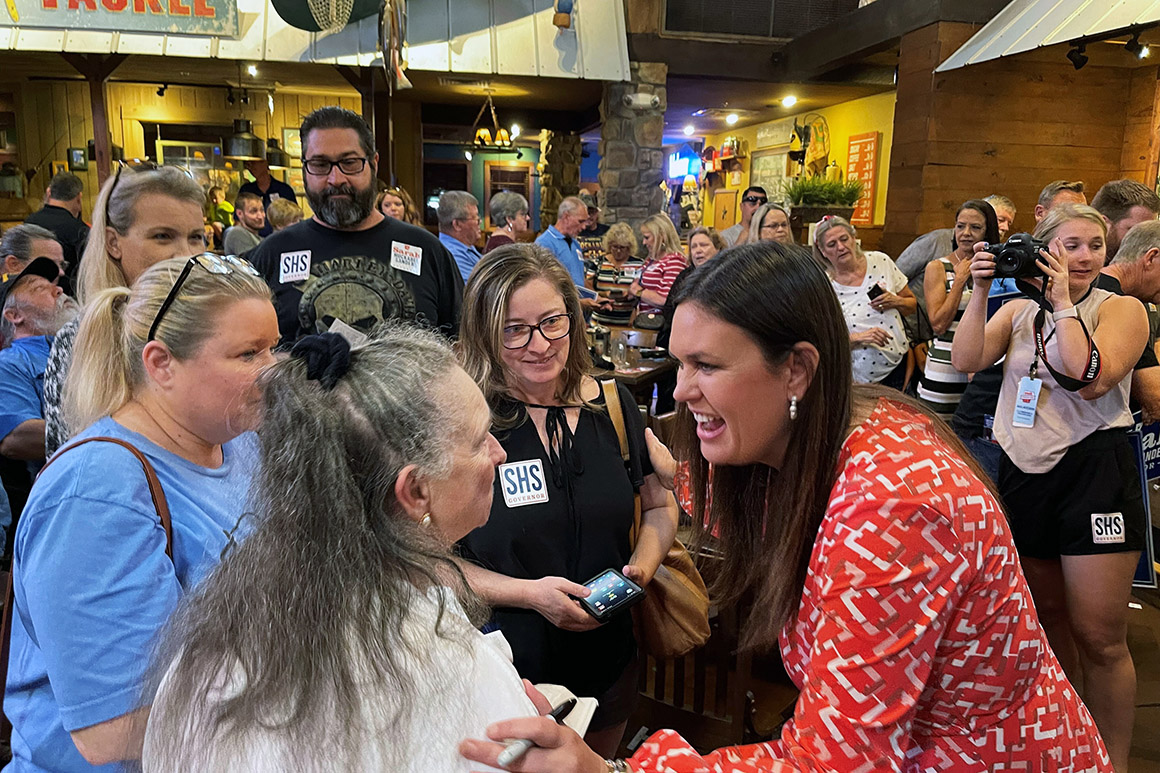 Republican Sarah Huckabee Sanders is widely expected to take the Arkansas governorship next year. And the stakes are high in Arizona, where several Republican women have declared runs, including state Treasurer Kimberly Yee, Secretary of the Arizona Board of Regents Karrin Taylor Robson and former TV anchor Kari Lake. On the Democratic side, Secretary of State Katie Hobbs is mounting her own campaign.

There’s no pot of funds at the Republican Governors Association specifically earmarked for supporting women. But party leaders say they’re committed to building out the bench of female candidates.

The Republican State Leadership Committee, which works to elect Republicans to state offices, is putting a “concentrated effort” to working with caucuses and teams in states to recruit candidates and support their runs, with an emphasis on finding qualified women, said Kamilah Prince, director of recruitment and training for the RSLC. They have also partnered with groups such as the Women’s Public Leadership Network to hold workshops for female politicians to help them through challenges that may hold them back from public office, such as balancing child care needs with their careers.

Olivia Perez-Cubas, vice president of communications for GOP group Winning for Women, pointed out that 11 of the 15 seats flipped by Republicans in the House in 2020 were Republican women.

“That’s proof that when we invest in strong, qualified female candidates, they win,” Perez-Cubas said. “As the number of Republican women in both state and federal offices increase, the bench for female governors will inevitably grow.”