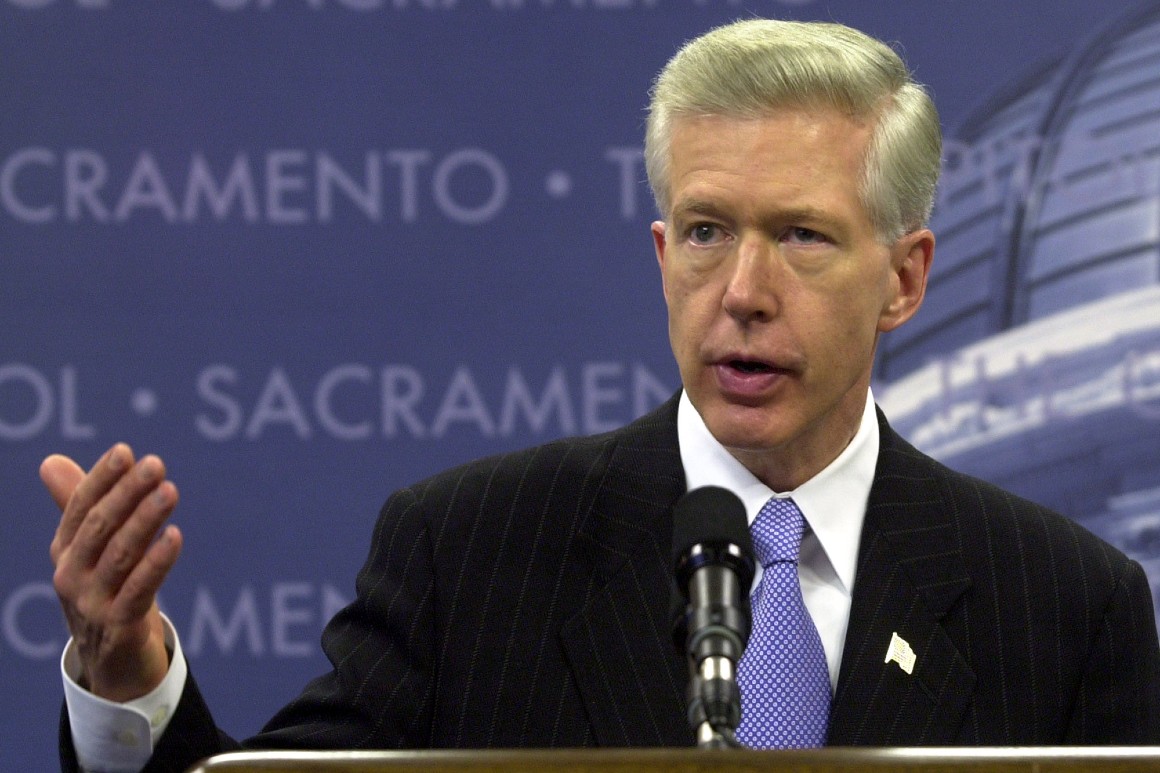 OAKLAND — Former California Gov. Gray Davis may be the only person on the planet who gets what Gov. Gavin Newsom is going through these days, trying to salvage his political future while managing a major crisis.

“It’s not fun,” said Davis, who was recalled in the 2003 election that brought Arnold Schwarzenegger to power, the only time a California governor has been ousted. “You have to deal with it, and you have to decide how to divide your time.”

Davis, in an interview with POLITICO days before Tuesday’s vote, was circumspect about the quirky recall process that has now resulted in two California governors facing a race for their political lives in less than two decades. Activists circulate recall petitions against every sitting governor, but they only caught fire — and money — against Davis and Newsom.

If a majority of voters support a recall, a replacement candidate only needs to corral a plurality of votes to win office. Conservative talk show host Larry Elder has galvanized GOP support this summer and could take office with several million fewer votes than Newsom gets.

“This is a game of Russian roulette,” Davis said. “And at some point, for sure, a governor who got more votes than his successor will have to leave office — because he failed to reach the 50 percent threshold.”

Newsom can console himself with one thing as he faces Tuesday’s historic contest: 2021 isn’t 2003, not by a longshot, Davis said. One major difference is the political makeup of California, where Democrats today hold a 2-1 advantage over the Republican Party. As Newsom faces recall, “there’s approximately 5 million more Democrats than there are Republicans,” Davis said. “That all happened over the last 18 years.”

Davis also had a Hollywood-sized problem in Schwarzenegger, at the time the world’s top action movie hero, who shocked the political universe with a last-minute jump into the race.

By comparison, Davis was the polar opposite, his first name “Gray” often said to reflect his personality. In an era when public service was viewed as a plus, he was an assemblyman, state controller and lieutenant governor before he took the top office, winding his way through a decades-long political career. His experience was a strong suit, but he also drew major headlines when the state’s energy crisis and blackouts struck.

“Schwarzenegger was a megastar in 2003,” Davis recalls. “He had campaigned the previous six months around the world for ‘Terminator III’ … he announced on the ‘Tonight Show,’ and he stayed in character through the campaign — “I will fix this,” Davis laughed. “You just couldn’t find a bigger celebrity action hero, one known around the world — and married into the Kennedy family.”

Davis had just won re-election in 2002, but it was far from a mandate. Political insiders saw it as somewhat of a cynical victory as Davis attacked his most dangerous Republican opponent, former Los Angeles Mayor Richard Riordan, during the GOP primary. That helped conservative Republican Bill Simon advance to the general election, an easier candidate to beat.

In 2003, California was facing budget woes and trying to fix its energy problems. Davis increased the state’s vehicle tax to help raise revenues. A generous public employee pension deal had begun to backfire. And businesses were frustrated with soaring workers’ compensation costs — enough that the California Chamber of Commerce endorsed the recall and Schwarzenegger, a rare rebuke to a sitting governor.

Davis’ approval ratings were far lower than Newsom’s today. In August 2003, Davis’ rating was at a historical low with 72 percent disapproving of his job performance, according to a Public Policy Institute of California survey. And 58 percent of likely voters wanted to oust him.

By comparison, 53 percent of voters approve of Newsom and only 39 percent of likely voters want to remove him, according to a PPIC poll released this month. And the influential California Chamber of Commerce has taken no position on the recall election.

Davis’ ouster came on the heels of an energy crisis that brought rolling blackouts to the state — as energy giants tried to game the system for bigger profits. “We just couldn’t keep the lights on, and I had real problems explaining to the average voters why I was upset with Enron and the other energy companies,” Davis said. “Voters never got a bill from Enron; they got a bill from PG&E or Edison.”

It was only after the recall that he was informed by reporters of a video “of a manager at Enron asking a plant in Las Vegas to go down, creating a blackout in San Francisco,” in an attempt to jack up prices, he said. “If that video had come out earlier,” it, too, might have swung the small margin of in his favor, Davis says.

And the 2003 recall had another big difference: an experienced Democratic candidate in the replacement field. Lt. Gov. Cruz Bustamante entered the contest, reasoning that voters were likely to remove the governor and that Democrats would want an alternative in that case. He was right, but the plurality did not choose him.

Newsom and state Democrats, perhaps mindful of that outcome, successfully discouraged any prominent Democrats with governing experience from running. They later urged Democratic voters to vote “no” on the recall and skip the replacement ballot entirely.

In the end, Bustamante got 31 percent, “and exit polls showed about a third of his voters voted yes on the recall,” Davis noted. “If Bustamente didn’t run, I might’ve won.”

California voters remain particularly concerned about homelessness, housing and public safety issues, a Berkeley Institute of Governmental Studies found earlier this year. But Davis said Newsom has shown himself to be a strong and capable force, especially when it comes to his handling of the Delta variant, with mask and vaccine mandates that have strong support.

Davis cautions that even with polls looking good, he is far from relaxed about what will happen Tuesday. He’s been there.

“A recall election is a strange duck,” he said. “It’s different … and this one is being held at a time when a lot has been asked of Californians — to get inoculated, to wear masks, to social distance, to safely to send your child back to school. There’s a lot going on.”

“So, I am not popping any champagne corks,” he said. “I just think you have to keep the pedal to the metal through election night, and just see how it turns out.”