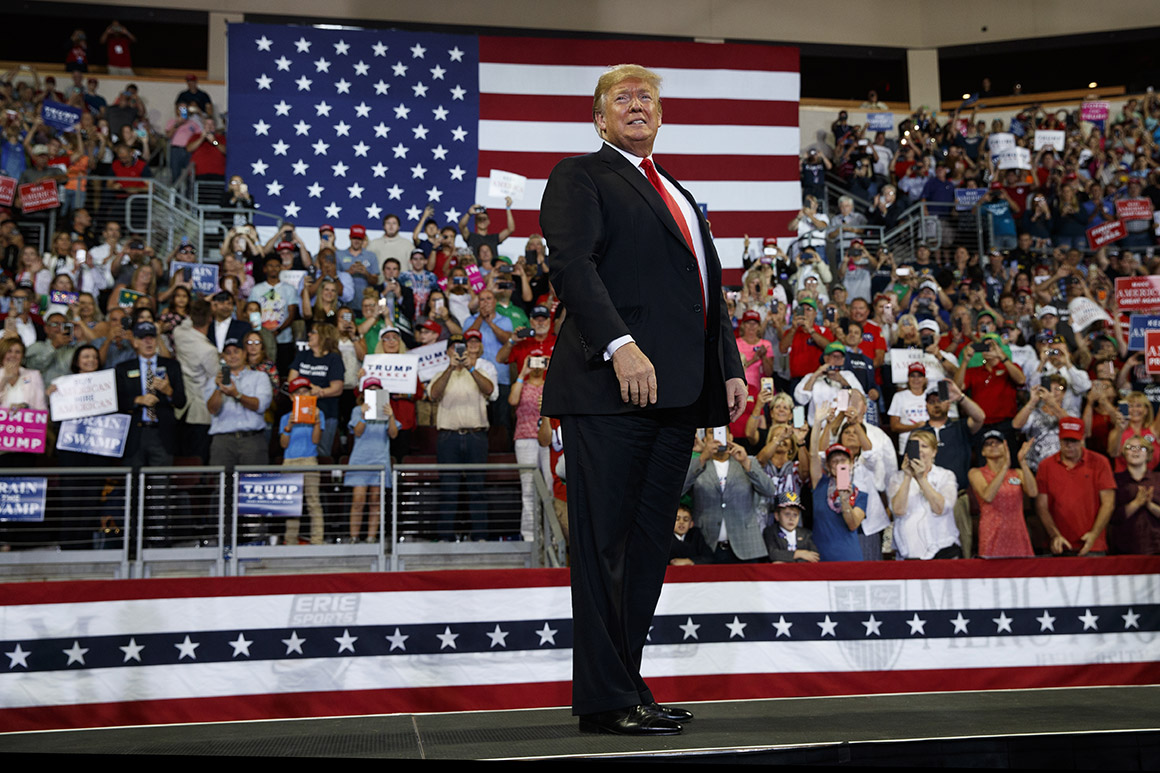 Donald Trump is endorsing candidates in party primary elections all the way down the ballot, a level of involvement that’s virtually unheard of among recent former presidents.

What’s remarkable about Trump’s picks isn’t just their breadth — he’s endorsed close to 40 candidates so far in 23 states — it’s their seemingly random quality. What’s even more unusual is that the political goals of the GOP’s de facto leader aren’t necessarily in sync with his own party — in some cases, they are starkly at odds.

If there’s a thread running through nearly all of Trump’s endorsements, it is his habit of rewarding allies and punishing enemies. So far, at the national level, he’s backed primary challengers to four House GOP incumbents and one sitting senator — all of whom voted for impeachment.

When it comes to state and local races, Trump’s seal of approval is often linked in one way or another to his failed efforts to have the 2020 election results overturned. In the three secretary of state contests where he has endorsed — Arizona, Georgia and Michigan — the common denominator is that his claims of election fraud were dismissed in those places by the current secretaries of state due to a lack of evidence.

In Arizona, where Trump endorsed state Rep. Mark Finchem’s bid for secretary of state this week, Finchem fits the Trump model. He’s not the only Trump supporter in the GOP field, but he’s arguably the most committed. He contends the 2020 election was stolen from Trump, participated in the “Stop the Steal” movement, attended the Jan. 6 rally at the U.S. Capitol and has pushed conspiracy theories promoted by QAnon.

In Georgia, where three of the state’s top Republicans have incurred Trump’s wrath for resisting his efforts to overturn President Joe Biden’s win there, Trump has been especially active.

He is backing Rep. Jody Hice in a primary challenge against GOP Secretary of State Brad Raffensperger — who resisted Trump’s entreaties to “find” more votes for him than were counted in Georgia — as well as Burt Jones in the open GOP primary for lieutenant governor. Jones is one of a group of state senators who called on Gov. Brian Kemp to call an emergency special session as part of an effort to overturn Georgia’s presidential election results after Biden’s victory.

Trump hasn’t yet endorsed in the governor’s race. But after publicly excoriating Kemp for months, there is little doubt where the former president stands.

To some Republicans, Trump’s efforts to take down GOP incumbents in federal and state races are at odds with the party’s interests in a midterm election where Republicans are within striking distance of recapturing control of Congress. While the party is focused on the November 2022 general election, Trump’s gaze is fixed on the primary election season that begins next spring.

“Donald Trump is continuing to add to the chaos in the Republican Party. It’s confusing the average Republican voter,” said Georgia GOP Lt. Gov. Geoff Duncan, a Trump critic who is not running for reelection. “The only question that seems to matter when Trump is making his endorsements is: ‘Are you with us on the election conspiracy stuff?’ Not, ‘Do you believe in smaller government? Do you support law enforcement? Do you believe in lower regulations?’ Instead, it’s, ‘Are you with me?’”

In Michigan, where Trump recently endorsed a primary challenger to veteran GOP Rep. Fred Upton and picked favorites in two other state races, the former president’s influence is already being felt.

“His early endorsements have had an instant impact inside Michigan political circles, raising some from completely unknown status into candidates to be reckoned with,” observed John Sellek, a top Michigan-based Republican consultant.

“[Trump’s] early picks clearly come with a tinge of revenge,” he said. “How the primaries turn out is still up in the air, due to redistricting and how the races evolve. But his impact on nominations decided at the state GOP convention is likely total and complete. We should expect more endorsements to come.”

With dozens of endorsements in House, Senate, gubernatorial, attorneys general, and state legislative contests — not to mention his long-standing involvement in cherry-picking state GOP chairs — Trump stands to continue remaking the party in his image. Those efforts would prove helpful to him in the event he runs for president again in 2024.

Many Republicans view that as a welcome prospect since the party base has moved in a direction that’s more closely aligned with Trump’s politics.

“Prior to 2015, there’s a good case to be made that the Beltway version of the Republican Party had been moving away from the base,” said Drew McKissick, the Trump-endorsed chair of the South Carolina GOP.

“What you saw in 2016 — with Trump beating 16 other qualified Republican candidates — was the rubber band snappin’ back. The base hadn’t moved. The Beltway had,” he said. “So there’s a continued ongoing reset; people are having to reorient themselves to where the base of the party actually is.”

To McKissick’s point, half of primary voters identify themselves as “Trump First voters” and only 43 percent identified as having primary loyalty to the GOP, according to a recent Echelon Insights poll.

“It’s what the base wants,” said Joe Kent, a Trump-endorsed Army veteran running against Washington state Rep. Jaime Herrera Beutler, who voted to impeach Trump. “The only good that came out of the election in 2020 and the impeachment votes is that we were able to really identify the establishment Republicans, country club Republicans, Republicans in name only, and make them vulnerable.”

Trump’s hands-on approach of choosing sides in party primaries contrasts with the style of his predecessor, former President Barack Obama, who typically refused to wade into contested primaries.

Tim Murtaugh, the former communications director for Trump’s campaign, said Trump’s endorsements are a manifestation of what party voters want.

“President Trump’s America First philosophy has very much become one of the core principles of the party,” said Murtaugh, who is serving as a spokesperson for Kelly Tshibaka, a Trump-backed primary challenger to Alaska Sen. Lisa Murkowski. “He’s supporting candidates who believe in the same thing. That’s where the party is now and it’s because of Trump.”

Murtaugh is also working for the Wyoming primary campaign of Harriet Hageman, who was endorsed last week by Trump to take on his top Republican target, Rep. Liz Cheney, the most recognizable Republican to vote for his second impeachment.

“President Trump maintains unprecedented influence over the Republican Party. As we see in elections across the country, there is only one lane for candidates to be successful: the Trump lane,” said a spokesperson for Trump. “Unsurprising, President Trump is already 10-0 in Republican elections. He will continue to weigh in to races to elevate the best candidates, while also continuing to weed out RINOs and sellouts.”

To varying degrees, Trump’s involvement in Senate and House primaries against incumbents puts him in conflict with Senate Minority Leader Mitch McConnell and House Minority Leader Kevin McCarthy, who have a mandate to protect their members.

Trump’s aggressive role in open Senate primaries is already exacerbating tensions with McConnell, who has made clear that electability — not fealty to Trump — should be the top standard in supporting a candidate.

So far, Trump has done little beyond issuing statements of support. He has given some candidates a boost in the form of a mention at rallies, or an appearance at a fundraiser, but strategists say he will have to start investing far more of his time and money into endorsed candidates to see any kind of significant impact.

A Trump endorsement is “table stakes,” said Matt Gorman, a GOP strategist and former communications director at the National Republican Congressional Committee. “The real key is what else he’s willing to do for you. A rally? Raise money? Ads on your behalf? That’s where the breakthrough most of the time really happens.”

Former Rep. Ryan Costello, who is considering a bid for Pennsylvania’s open Senate seat and has criticized Trump since retiring from the House, said Trump has made so many endorsements in so many races that it’s impossible to tease out the net effect of it all.

“Obviously, Trump is a score-settler,” he said. “Is Trump a kingmaker in a Republican primary? In many cases, yes. In a safe Republican seat, you’ll have a certain type of candidate he endorses who will win. But in swing seats, you could have a Trump candidate win the primary and lose the general because Trump is so toxic. That doesn’t bother Trump. But it’s a problem when we want to win more seats in the midterm.”