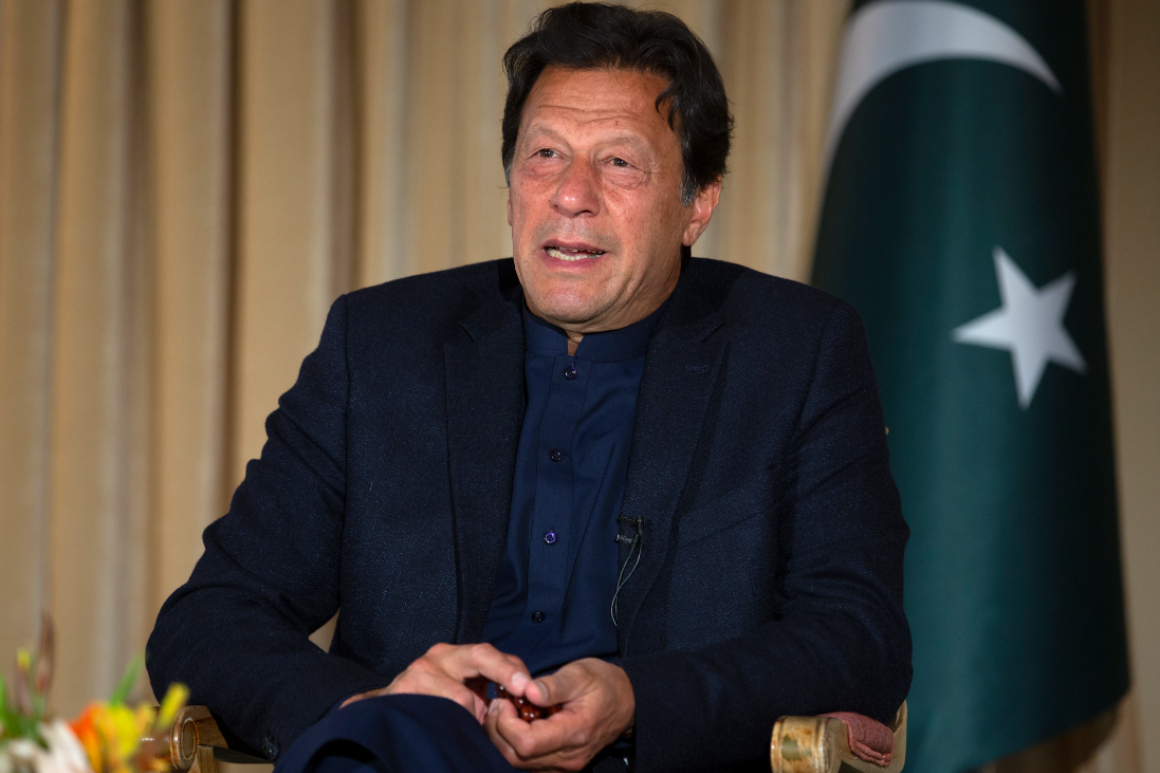 The Biden administration is quietly pressing Pakistan to cooperate on fighting terrorist groups such as ISIS-K and Al Qaeda in the wake of the Taliban takeover of Afghanistan.

In response, Pakistan — long accused by U.S. officials of aiding the Afghan Taliban — has hinted that Islamabad deserves more public recognition of its role in helping people now fleeing Afghanistan, even as it has downplayed fears of what Taliban rule of the country could mean.

These exchanges and others, described in emails, sensitive but unclassified cables and other written materials obtained by POLITICO, offer a glimpse into how tensions between Washington and Islamabad linger after two decades of war in Afghanistan. They suggest that the two governments are far from lockstep on the road ahead, even now that the United States has pulled its troops from Afghanistan.

In one discussion with a U.S. official, for instance, Pakistani Ambassador to the United States Asad Majeed Khan appeared to question reports that the Taliban are carrying out revenge attacks in Afghanistan — including claims that the group has been executing its perceived enemies in door-to-door raids.

Khan told the American official that, according to Pakistani “ground observations,” the Afghan Taliban “were not seeking retribution, and in fact were going home to home to assure Afghans that there will not be reprisals,” according to parts of a memo circulated among U.S. diplomats. The U.S. official, Ervin Massinga of the State Department, is described as noting that “he has seen reporting to the contrary and hopes the Taliban do not seek revenge.”

Meanwhile, in Islamabad, the U.S. embassy is being strained by the Afghan refugee crisis. U.S. diplomats were scrambling just days ago to get answers from Washington to an array of questions about how to handle the influx of people arriving in Pakistan from neighboring Afghanistan.

The Pakistani embassy in Washington did not immediately answer questions for this story submitted via email Thursday. A spokesperson for the State Department said, “We don’t comment on leaked documents, nor do we comment on private diplomatic conversations.”

The Biden administration has been unusually circumspect about revealing its contacts and discussions with Pakistan. While Pakistan’s actions often appear at odds with the United States, it nonetheless is a nation with links to the Afghan Taliban whose cooperation on fighting terrorism can be helpful. It’s also a nuclear-armed country American officials would prefer not to lose entirely to Chinese influence.

President Joe Biden has not spoken yet with Pakistani Prime Minister Imran Khan. Khan’s wait for a call from the American leader has been the stuff of Pakistani media gossip and memes.

In the past month, as the Taliban made rapid gains across Afghanistan, Secretary of State Antony Blinken spoke directly only once to Pakistani Foreign Minister Shah Mahmood Qureshi, according to what’s been made public by the State Department. Readouts of these diplomatic calls are usually so bland as to be useless to observers and the press, but this one, from Aug. 16, was unusually devoid of detail.

“It’s clear that the Biden administration from the top levels seems to have pretty deep reservations about Pakistan, born of years of experience, and is not willing to either give Pakistan a pass or kudos for anything that Pakistan might like,” said Daniel Markey, a South Asia specialist who served at the State Department from 2003 to 2007.

In the wake of the Sept. 11, 2001, attacks, as the United States invaded Afghanistan to topple the Taliban regime at the time, U.S. officials leaned on Pakistan for help. Pakistan cooperated to some degree, especially in late 2001, but critics say it has played a double game ever since.

Pakistani security forces had long fostered the Afghan Taliban, effectively supporting their harsh rule in 1990s Afghanistan. Following the U.S. invasion, Islamabad is alleged to have harbored Taliban leaders and fighters on its soil, undermining U.S. efforts to defeat the Islamist militia. Some analysts also suspect Pakistani training and tactical assistance helped the Taliban quickly sweep to power in Afghanistan over the past month.

Former officials say that, among other reasons for its support, Pakistan sees the Afghan Taliban as a partner in any future fight against rival India. Pakistan also helped deliver Afghan Taliban leaders to peace talks with the United States and the now-fallen Afghan government, even as Islamabad has long officially dismissed the idea that it actively supports the Afghan Taliban.

Pakistan has been more helpful to the United States in its fight against Al Qaeda and other terrorist groups, but even that cooperation has been questioned. It was in Abbottabad, Pakistan, after all, that the United States found and killed Al Qaeda chief and Sept. 11 mastermind Osama bin Laden in 2011. The Pakistani government denied knowing he was there.

That said, Pakistani help in tracking down and targeting terrorist targets in Afghanistan now that the U.S. has withdrawn troops would be “useful, if you can get it,” a former senior U.S. diplomat said. Getting humanitarian aid to Afghanistan in the future may require using supply lines that run through Pakistan, the former diplomat added.

The Afghan Taliban’s triumph in August may not prove a long-term victory for Pakistan. The win has emboldened groups like the Pakistani Taliban, who have long used terrorist attacks and other means to try to overthrow the Pakistani government. The refugee crisis sparked by the Taliban’s victory in Afghanistan, too, is sure to test Pakistan, which already hosted numerous people displaced from the neighboring country.

The meeting between Massinga and Khan took place on Aug. 26, the day that some 170 Afghans and 13 U.S. troops were killed in a bombing at the Hamid Karzai International Airport in Kabul, which the U.S. was using to help evacuate at-risk Afghans, Americans and others. U.S. officials blamed the attack, which also wounded many people, on ISIS-K, an offshoot of the Islamic State terrorist organization and a rival of the Afghan Taliban.

The Pakistani ambassador offered condolences and the use of Pakistani medical facilities, according to the description of the meeting. Massinga used the moment to indicate that Pakistan could help on other fronts.

“Acknowledging the tragedy, Massinga underscored the mutual interest Pakistan and the United States have in targeting ISIS-K and al-Qa’ida,” the description states. In response, the Pakistani ambassador “acknowledged ISIS-K was a common enemy for the Taliban as well.”

Massinga expressed appreciation for Pakistan’s role in helping evacuees get out of Afghanistan, according to the meeting notes. The portions seen by POLITICO did not specify exactly what Pakistan was doing. At one point in the talk, however, “Khan intimated the Pakistani government would also appreciate public acknowledgment for the country’s assistance on the evacuation front.” (An Aug. 20 statement of gratitude from Blinken to several countries for their help in the evacuations did not mention Pakistan.)

Aside from his questioning of the reports about Taliban reprisals, Khan at other moments appeared to be defensive of the Afghan Taliban.

The Pakistani ambassador “claimed the Taliban were not stopping any third country nationals from getting to [the Kabul airport], but acknowledged there were some issues with Afghans getting through checkpoints.” Khan also highlighted Pakistan’s “effort in pushing the Taliban (while acknowledging it was increasingly difficult to get in contact with them) to form an inclusive government in Kabul.”

Lisa Curtis, who was a senior National Security Council official dealing with Afghanistan and Pakistan during the presidency of Donald Trump, said Islamabad and Washington appear to remain far apart on how Pakistan can be helpful in Afghanistan.

“If anybody is arguing that we need Pakistan’s support to try to moderate Taliban behavior, I think they should remember that we didn’t get that support for 20 years, so we’re unlikely to get it now that the Taliban is in power in Afghanistan,” she said.

A separate message obtained by POLITICO contains an Aug. 28 cable described as “an urgent request for guidance” on how to deal with “a rapidly increasing number of requests to assist Afghans in Pakistan” who were or claimed to be eligible for resettlement to the United States.

In many of the cases, the embassy referred inquiries to the United Nations refugee agency or partner NGOs. But it was struggling to handle requests “from offices within the State Department and the interagency — as well as from international organizations, sponsors, and individual applicants, some of whom have appeared in person” to deal with myriad specific cases that included helping people arriving at the Afghan-Pakistan border.

The embassy officials asked for guidance on several questions, such as how they should help Afghans with a Special Immigrant Visa application “in process but not yet approved,” and those who say they are eligible for that visa program or others but who have no referrals on file.

Embassy officials indicated that things would only get harder.

“The pace of these requests is creating an ad hoc system of responses that both taxes mission resources and increases potential confusion over guidance and responsibilities,” the cable states. “Moreover, we assess that the number of these requests is likely to dramatically increase as operations shift from evacuating Kabul by air to assisting individuals who cross into Pakistan over land.”

Two days later, on Aug. 30, the embassy issued a staff notice, obtained by POLITICO, announcing it was creating a “task force for Afghanistan-Pakistan issues.”

The goal of the unit, the notice said, is “to lead and coordinate the mission’s response to humanitarian, refugee, evacuee, and related issues associated with Afghanistan.”