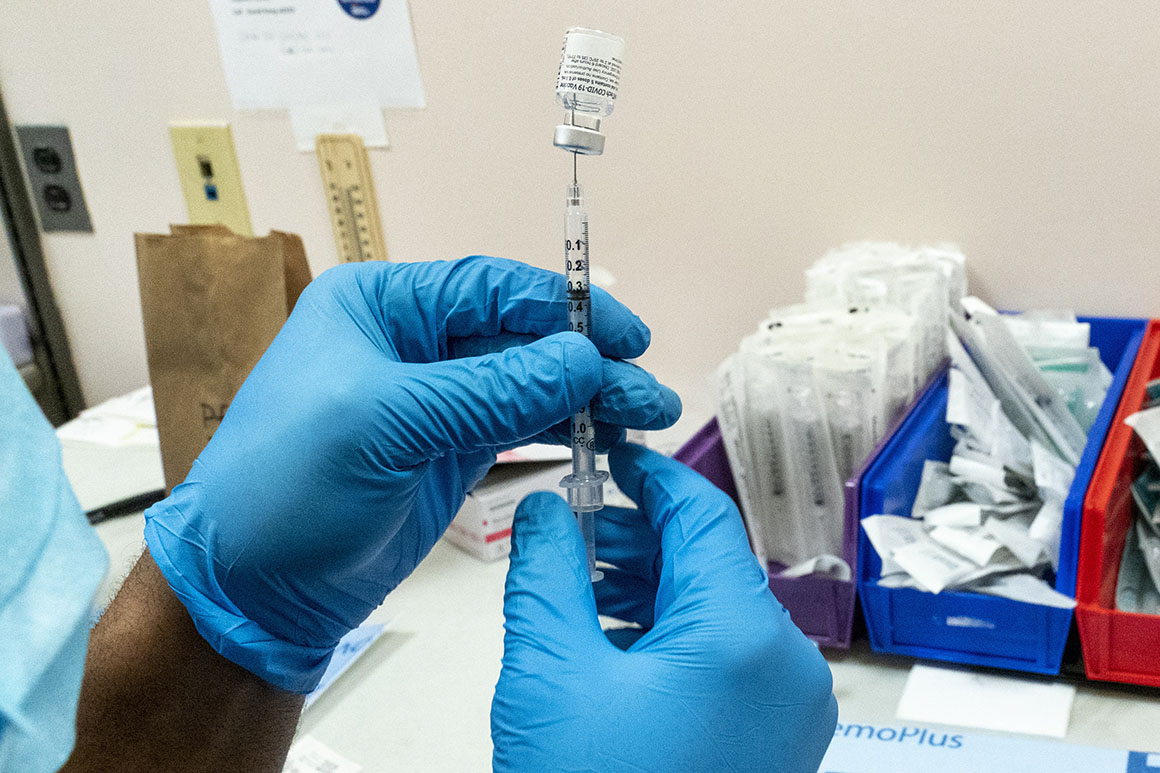 Top advisers to President Joe Biden pushed for his administration to announce a broad booster rollout for September in part because of fears that the U.S. could run short of doses needed to offer the shots to its entire population if vaccines’ protection decreased suddenly, according to two senior officials with knowledge of the matter.

The internal campaign coincided with pleas from international leaders for the U.S. to do more to help lower-and middle-income countries secure initial doses. Biden’s team wanted to make sure the U.S. would have enough supply for the 40 percent of eligible Americans who still needed their first shots and those who would eventually need a boost, the officials said — despite the country’s deep vaccine stockpile.

In a series of meetings over the past two months, Biden’s chief medical adviser, Anthony Fauci, and some of the most senior White House officials argued that the U.S. needed to protect itself, pointing to data from Israel that showed the Pfizer-BioNTech vaccine was becoming less effective against infection and severe disease. And if domestic data had yet to catch up to the distressing reality in Israel, it soon would, those officials argued.

The deliberations underscore the extent to which top Biden administration officials were guided by concerns about future American vaccine supply, not just international data on vaccine performance, in developing their vision of a sweeping booster rollout. They also show how the administration grappled with living up to its commitment to help vaccinate the rest of the world while also safeguarding Americans in the weeks leading up to the Aug. 18 booster announcement.

“No one wants to be the person responsible for not having the doses when we need them,” one individual familiar with the deliberations told POLITICO.

Similar concerns led the administration to delay its first vaccine donations this spring despite an abundance of doses at home, prompting criticism that the United States was hoarding shots while the world suffered. The White House’s booster balancing act comes as the Biden administration this week hosts a global vaccine summit at the U.N. General Assembly, at which U.S. officials will push other international leaders to commit more resources to increase vaccination worldwide.

Meanwhile, the Biden team is facing setbacks at home. On Friday, the Food and Drug Administration’s vaccine advisory committee rejected recommending the use of Pfizer-BioNTech’s booster in people 16 and older, arguing there was insufficient evidence to support that. The panel instead endorsed a narrower plan to give boosters to people 65 and older and those at high risk of severe Covid-19.

The decision came after senior officials at the Centers for Disease Control and Prevention, and outside health experts, argued in administration Covid meetings and through backchannels that the U.S. did not yet have data that indicated it should begin doling out booster shots to large portions of the population — perhaps only for the elderly. They argued the administration should focus on ramping up access to vaccines overseas to prevent the emergence of new variants before giving boosters to otherwise healthy Americans.

At FDA, the agency charged with regulating the shots, two top vaccine experts recently announced plans to retire, in part due to concerns about the Biden team’s top-down booster plans. All eyes are now on the agency, awaiting its decision on Pfizer and BioNTech’s booster application.

On cable television shows Sunday, senior Biden officials — including Fauci — walked back their initial claims about the U.S. needing a broad booster rollout. They said it was always the administration’s plan to follow the FDA’s recommendations and to have the first doses go to the most vulnerable.

“This is why we have a process,” White House press secretary Jen Psaki told reporters Monday. “It is important to hold the FDA as the gold standard.”

“The path out of this pandemic relies on us vaccinating people here at home as well as abroad, and we’ve planned for both since the beginning of the administration,” a White House official told POLITICO. “We have a dedicated supply to vaccinate all Americans, including with a booster if needed, and we will keep that supply in this country so that we are prepared for every scenario.”

The U.S. has a stockpile of about 150 million doses it can use to begin doling out boosters immediately. It has ordered an additional 200 million doses from Pfizer-BioNTech that the companies will begin delivering in October.

The administration is set to announce this week that it is purchasing hundreds of millions of more Pfizer doses for countries in need, along with pushing for greater global vaccine aid at the U.N. Covid summit.

Officials at the State Department and USAID have advocated in meetings with the White House officials that the U.S. do more to get doses to lower and middle income countries and have raised concerns about how the administration’s booster plans would impact donations, an individual with direct knowledge of the matter told POLITICO.

The concern among some top officials in the administration is that if the U.S. begins earmarking doses for boosters, other wealthy western countries would follow, tightening an already strained international manufacturing system. Slightly less than half of the total amount of doses the administration promised to donate before the end of the year have made their way overseas, that source said.

“I think what you would end up having is a really stark difference between the low income countries and the rest of the world in terms of their access to vaccination,” said Celine Gounder, an infectious disease specialist at Bellevue Hospital in New York and former Covid-19 adviser to the Biden transition, of a broad booster rollout this month. “You basically would have high income and some low-and middle-income countries that would be getting third doses, and then you would have lower-income countries with nothing.”