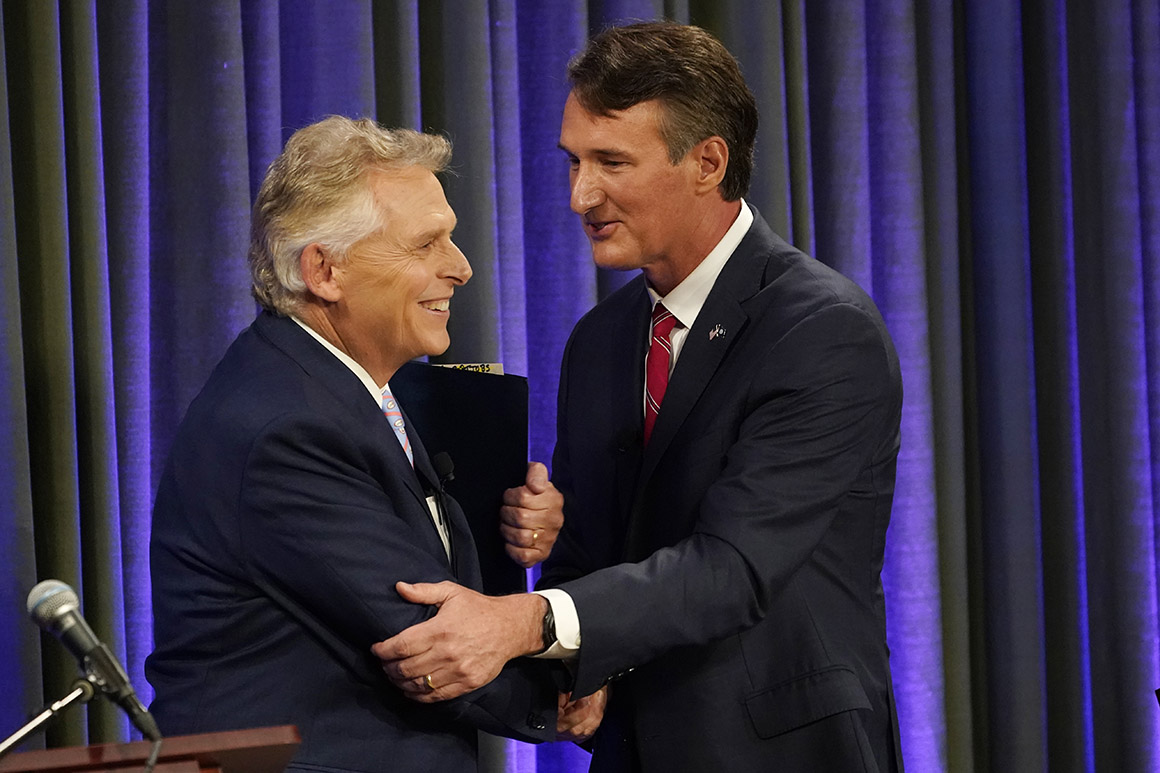 This November’s race for Virginia governor isn’t only one of the earliest barometers of the political environment heading into the 2022 midterms. It will also be one of the first signs for how permanent Americans’ shift away from Election Day voting is, a trend accelerated by the coronavirus pandemic.

Friday marks the kickoff of in-person early voting in Virginia, 45 days before the Nov. 2 faceoff between former Democratic Gov. Terry McAuliffe and Republican Glenn Youngkin. It’s the first gubernatorial election in which both in-person early voting and no-excuse mail voting are available for all Virginians, after the Democratic-controlled state government passed a law last year scrapping a requirement that previously required voters have a valid excuse to do so.

The change has brought a jolt to the typical off-year election calendar, leading both campaigns to recalibrate their strategies for persuading swing voters and juicing turnout among their own supporters.

Michael said his party had been working to recruit more volunteers earlier this year and educating voters on their options.

This year’s election actually marks the second for the new rules, which were almost immediately put under a stress test in 2020 when voters across the country looked for alternatives other than voting in person on Election Day during the pandemic. Over 2.8 million Virginians did so, according to data from the Virginia Public Access Project, accounting for over 60 percent of the votes cast last year. That was a dramatic increase from the roughly 15 percent of voters who did so in 2016, when an excuse was still required.

This year, the test will be just how sticky that shift in voting methods was, which will significantly impact both parties’ planning for 2022, 2024 and beyond.

Both candidates are on the trail Friday to mark the early-voting kickoff. McAuliffe is starting his day in the vote-rich Northern Virginia, a Democratic bastion key to any victory statewide. And Youngkin is ending his with an early-vote rally in Chesterfield, the state’s fourth largest county just south of Richmond — a long-time Republican stronghold that flipped to Biden last year.

Candidates and operatives on both sides of the aisle say there’s an increased focus on educating voters about the still-unfamiliar process, even though it was used last year.

“People will tell me, for instance, ‘I really appreciated the chance to vote early last time. Is that still around?’” said state Del. Dan Helmer, a Democrat who flipped a state House seat in 2019 and is running for reelection this year. “People don’t necessarily know if that was a pandemic-related thing, or if it was permanent.”

This November’s election in Virginia does, however, bring a new change from last year’s election: early voting on Sunday. Earlier this year, Virginia Democrats backed that as well, giving localities the ability to opt in to early voting.

Da’Quan Marcell Love, the executive director of the Virginia NAACP, said his organization has put extensive resources into encouraging counties to sign up for Sunday early voting.

“If you would have asked me in the middle of August, I would have told you that well, there are only 12 localities that are scheduled to even have Sunday voting. But we were able to expand that,” he said. Love said that the NAACP and partner organizations would work to organize some of the state’s first “Souls to the Polls” events that will encourage Black voters to head to the polls after Sunday church services.

And Love, who said that this year’s election has brought the largest off-year investment from his organization in 15 years, said how they talk to voters has also shifted away from promoting “voter protection” programs to educating voters about the bevy of options they now have to cast their ballots.

But he also said there are warning signs among Black voters heading into early voting. “There may be a sense of complacency amongst them, that, ‘Yeah, you know, maybe I can sit this election out,’” he said. “The lack of enthusiasm in the Black community is something that we have been ringing the alarm about as it relates to this election.”

The new voting calendar in Virginia also speeds up the schedule for campaigns, which now need to allocate more staff hours, volunteers and advertising dollars earlier in the year to try to get as many of their supporters to vote early.

Neither McAuliffe nor Youngkin is short on cash: The former Democratic governor raised $11.5 million over the last two months and entered the closing stretch of the race with $12.6 million in the bank, according to campaign finance disclosures filed earlier this week. And Youngkin raised $15.7 million, buoyed by a $4.5 million personal loan, and has $6 million left in the bank. Youngkin has now contributed $16.5 million of his own money to his campaign.

But the sped-up calendar does present campaigns new opportunities to reach voters that would otherwise be missed if regular voters are convinced to cast their ballots early, said Ben Tribbett, a Virginia-based Democratic strategist.

“It saves them so much money, because you can remove [voters] from your universes. You don’t have to mail them. You don’t have to knock their doors. When people participate early it updates in the voter file almost immediately,” Tribbett said. “Then the money that you spend towards turning people out gets much more highly targeted down to who hasn’t voted.”

With early voting still in its relative infancy in the commonwealth, it is unclear how much Virginians will use it.

“The question becomes, how do people take advantage of it?” said Dave Rexrode, the executive director of the Republican Governors Association and a longtime Virginia politico. “What is turnout going to actually look like with early vote, because we’ve never really had it before. We had it last year, but it was also the pandemic. It was a presidential year, which is a very different year.”

Rexrode said he believed most Virginia Republicans will vote on Election Day this year, and noted that historically it is the “hard partisans” that showed up to vote during the early days of early voting.

Of the 2.8 million people who voted early in 2020, about 1.8 million voted during in-person early voting, and just over 1 million voted via the mail, according to the VPAP data. Virginia does not have party registration, but modeling data shared with POLITICO by TargetSmart, a prominent liberal data firm, suggests that Democratic-aligned voters were more likely to cast a ballot early compared to Republicans.

In the modeling, Republican and Democratic voters in 2020 cast ballots early in-person at about the same rate: 39 and 42 percent of those who cast voted, respectively. But Democrats were far more likely to cast a mail ballot: 28 percent to 17 percent. For voters modeled as unaffiliated with either party, 37 percent voted early in-person and 25 percent by mail.

Virginia state Democratic Party Chair Susan Swecker said that the party has been focused on educating voters in the run-up to the early-voting kickoff. “We’ve gotten better at communicating to our voters the options that they had,” she said at a press conference on Thursday to mark the first gubernatorial debate on the eve of early voting. “It was a very short time frame last year to get a lot of that up to speed.”

Even still, the party is hoping to at least use data from the 2020 election as a jumping off point when contacting voters. The state coordinated campaign plans on using Virginia voters’ 2020 “voting plans” — which the party pushed to collect across the country during the last election — to help determine what method to push Virginians to vote this year, and the McAuliffe campaign has already started running social media ads encouraging voters to request absentee ballots, dinging Youngkin over abortion in the process.

Swecker said this year’s election will be a “good test” on how many voters have switched to preferring to cast their ballots before Election Day. “I think a lot of them will, just for convenience sake,” she said.