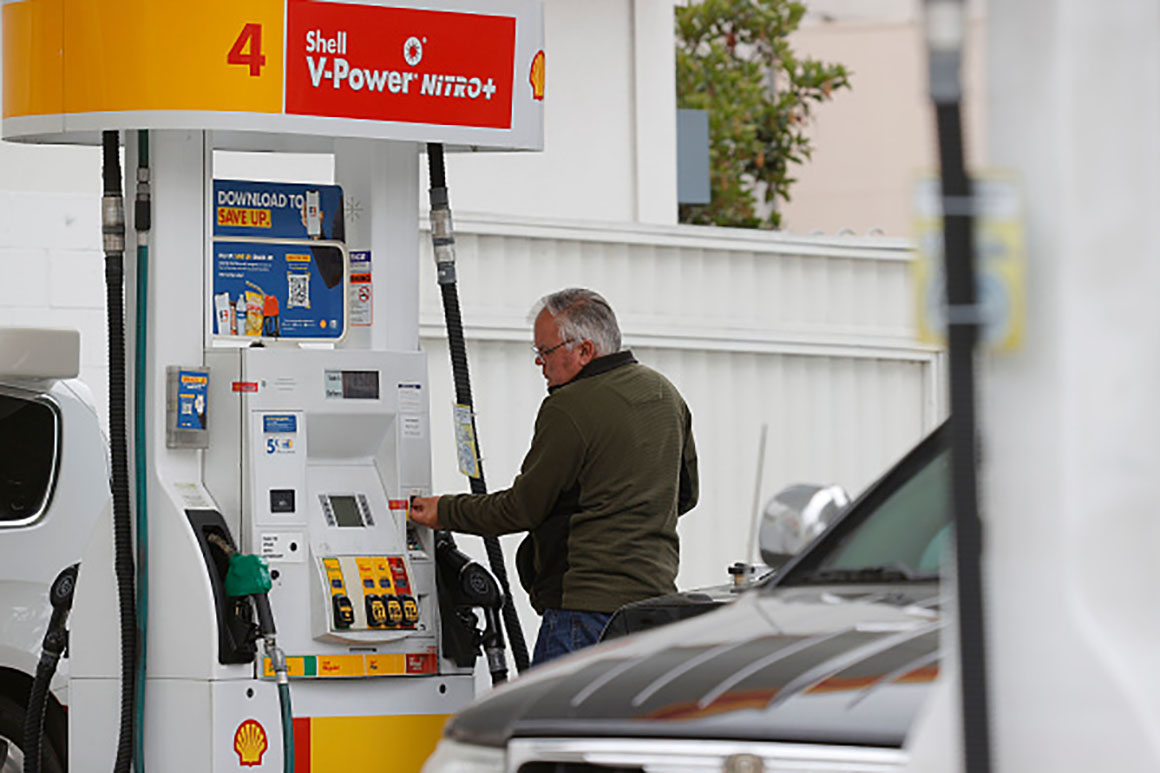 Charging Americans for road upkeep based on how many miles they’ve driven has long been relegated to the dustbin of policy — intriguing ideas that are too politically toxic.

Like raising the gas tax, a per-mile fee for vehicles is sporadically floated and quickly quashed, as Transportation Secretary Pete Buttigieg discovered earlier this year when — just weeks into the job — he stepped on a political landmine for suggesting the idea shows promise.

But the concept is poised to get a significant boost in the infrastructure plan moving through Washington. Tucked into the legislation is a provision that would create a national test of replacing the current gasoline tax with a per-mile fee, for the first time ever.

It’s an acknowledgment that despite concerns about privacy, a “Vehicle Miles Traveled” fee could be the most logical successor to the current gasoline tax, which fuels part of the nation’s transportation spending. Paid at the pump, the federal gas tax — which has not been raised since 1993 — has been steadily losing ground as vehicles become more fuel efficient. But infrastructure needs continue to climb, and increasingly lawmakers have decided to make up the gap with deficit spending.

A per-mile fee has the major advantage that it could capture every vehicle’s road usage, even those that don’t use fossil fuels. But it also comes with serious baggage, chiefly concerns about privacy, government tracking and impacts to rural Americans that are difficult to overcome. Indeed, even the infrastructure bill’s modest step quickly drew a culture war arrow from Republican Rep. Lauren Boebert (Colo.), who called the provision a “tax on rural America, imposed by DC beltway liberals.”

And that’s part of why many who study transportation say it’s at least a decade away from being a viable option, though the national pilot is a step toward narrowing that window.

“This isn’t something you can turn on overnight — you’ve got a 12- to 15-year lag, so the longer we wait to start implementing this, it’s going to be even longer before we can start getting revenue from it,” said Rob Atkinson, president of Information Technology and Innovation Foundation, a science and technology think tank, who chaired a 2009 panel that studied funding options for infrastructure.

Need for a federal champion

In fact, it’s been estimated as a decade away for some time, in part because while several states have had individual pilot programs running for years, there’s been little focus on nationwide implementation. In 2015, Bob Poole, the director of transportation policy at the conservative think tank Reason Foundation, told a House committee that a federal VMT system was 10 years away from viability.

In a recent interview with POLITICO, Poole gave his latest estimate: 10 years away.

Poole said VMT hasn’t been politically feasible because of the same dynamics that have made raising the federal gas tax a third-rail issue: lack of political will. Congress has instead preferred to “in a rather low-key way just [fund] state pilots,” he said, referring to a grant program established by Congress in 2015 that funds VMT pilots in some states.

The reason some transportation experts favor moving away from a gasoline tax and to a VMT system involves the changing nature of what Americans drive. In the past, fuel taxes were a reasonably proxy for how much wear and tear peoples’ vehicles exacted on roads and bridges. But cars are increasingly becoming more fuel efficient, and in some cases don’t use gasoline at all.

That means they pay less at the pump — and, related, that means they pay relatively less into the national system, despite contributing just as much to infrastructure’s maintenance needs. A VMT would capture not only electric vehicles currently paying nothing, but also other alternative-fueled vehicles such as natural gas and hydrogen, or hybrid vehicles.

Joung Lee, policy director at the American Association of State Highway and Transportation Officials, said VMT is in a better position in Washington than it was a decade ago, with signs of bipartisan support for the idea emerging in recent years.

“There were a lot of policy considerations taking place 10 plus years ago at this point as well,” he said. “But what was, I think, missing at the time was the political interest, and the willingness to really consider it because it was so new.”

In Lee’s view, moving to VMT is less about overcoming the bureaucratic hurdles, and more about finding the political will at the federal level.

“If people really want to do this and find a way to do it administratively, they’ll do it,” he said. “It’s just a matter of how does this rank.”

Rep. Sam Graves (R-Mo.), the ranking member of the House Transportation Committee and an outspoken supporter of VMT, said it’s “essential to move this to the national level without any more delays — take these lessons learned from the state pilots and apply them in a real-world, nationwide demonstration environment.” Graves said his support for any such switch depends on addressing concerns about privacy and rural equity, but that state progress on those topics suggests they’re solvable problems.

Graves would have been well-positioned to push a switch to VMT from his perch on the committee, before the House switched to Democratic control.

Rep. Earl Blumenauer (D-Ore.), another longtime supporter of VMT, said he has used VMT himself in Oregon for more than a decade and views it as the “long-term solution” for the Highway Trust Fund, but still sees it as 10 years away from broad implementation.

“It’s not ready for primetime and we need to be able to, in a comprehensive way, replace the gas tax with a road user charge that is fair and is sustainable,” he said. “And we have enough time to be able to do it right.”

Lack of progress on the federal level doesn’t mean it’s been fallow everywhere — Oregon and Utah have fully-functioning opt-in programs that collect miles-based revenue. Dozens of states have launched similar pilots or studies of the concept, working to solve the logistical and privacy issues that opponents say make VMT unworkable right now.

Some of the issues those state-level programs are trying to sort out: the concern that VMT disadvantages rural residents who must drive more, that it costs too much to collect, that it doesn’t do enough to take gas-guzzling cars off the road and that tracking locations would violate drivers’ privacy.

Much of the current work studying the solutions to those issues is within two multi-state coalitions of state transportation officials: RUC West, which has 17 state members from Texas to Alaska, and the Eastern Transportation Coalition, which counts 17 members along Eastern Seaboard.

Michelle Godfrey, a spokesperson for Oregon’s OReGO VMT program and RUC West, said the western states’ coalition was created out of “self-preservation” — states wanted to trial VMT, but lacked the funding or political support. Without any federal program they’ve become the primary champions for VMT, even though neither coalition considers themselves an advocacy organization.

Godfrey said Oregon fields frequent calls from other states asking for advice on how to get started and extends their help on the state’s dime.

“We just do that because we want to help people and if another state does a road charging program, it lifts all of us — it gets us just that much more closer to a national system,” she said. “So every state that expresses interest, we do whatever we can to support them in that effort.”

One of the thorniest challenges with any shift to VMT involves concerns around privacy. States with VMT pilots have variously offered drivers a choice between regular odometer checks, plug-in mileage meters, GPS trackers and smartphone apps.

Options that could involve any suggestions of tracking will almost certainly raise privacy concerns, with a high potential for becoming politicized over fears that the government is somehow tracking drivers.

Jay Stanley, a senior policy analyst at the ACLU, said privacy advocates will “definitely be watching” to ensure VMT is set up in a way that prevents the government from obtaining its citizens’ location information.

Atkinson said VMT programs are “actually exactly the opposite” of tracking systems, comparing the technology to toll transponders pasted to drivers’ windshields, which collect location information anonymously and do not relay the information to the government.

Nate Bryer, vice president of innovation at Azuga — which provides data processing services for Oregon’s program and has worked with more than dozen other VMT pilots — said the data is anonymized and aggregated. In addition, Oregon requires it be deleted after 30 days.

A VMT will almost certainly be much more expensive to collect than the gas tax, requiring additional bureaucracy and government funds to run it. A 2012 Rand Corporation study found that fuel taxes — which are collected at the wholesale level — cost less than 1 percent of revenue to administer, whereas VMT could cost 5 to 6 percent of revenue to collect.

“If you’re talking about instituting national mileage fee, now you’re making everyone who drives a taxpayer, so you’re going from either dozens or a few hundred entities who are liable for the [gas] tax to well over 200 million [for VMT],” said Liisa Ecola, a senior policy analyst at RAND who worked on the study.

Another study from the American Transportation Research Institute found a national VMT program could cost $20 billion annually, or 300 times more than the federal fuel tax. The upfront cost of providing every vehicle with a dongle to measure mileage could exceed $13 billion alone.

Others worry about the impact that a switch to a VMT fee may have on rural drivers, who often have to drive long distances for work or the grocery store, and who have few or no options for alternative public transit.

According to a study done for RUC West, while rural drivers may tend to drive longer stretches at a time, they make those trips less often. While their data varied from state to state, overall rural drivers did not drive more miles than urban counterparts. In total, the study — which examined Arizona, California, Idaho, Montana, Oregon, Texas, Utah and Washington — found that rural drivers could ultimately pay 1.9 percent to 6.3 percent less under a VMT system than they do in gas taxes.

In addition, if a driver uses a GPS-enabled means of keeping track of VMT, the system could exempt private roads from the tally.

All of this could spell trouble for consumer acceptance, especially considering that most of the general public doesn’t know they’re paying a tax to maintain roads at all, much less having to understand a new mechanism.

Trish Hendren, executive director of the Eastern Transportation Coalition, said managing public perceptions of VMT is one of the most pressing issues her organization has run into.

Surveys by the coalition found that 70 percent of New Jersey residents incorrectly believe transportation funding is stable or increasing, and 73 percent were not familiar with VMT.

“We have a big job as a field to engage with the public and say you value this transportation, we hear that you do, but that link between how much you use and how much you pay is broken,” Hendren said.