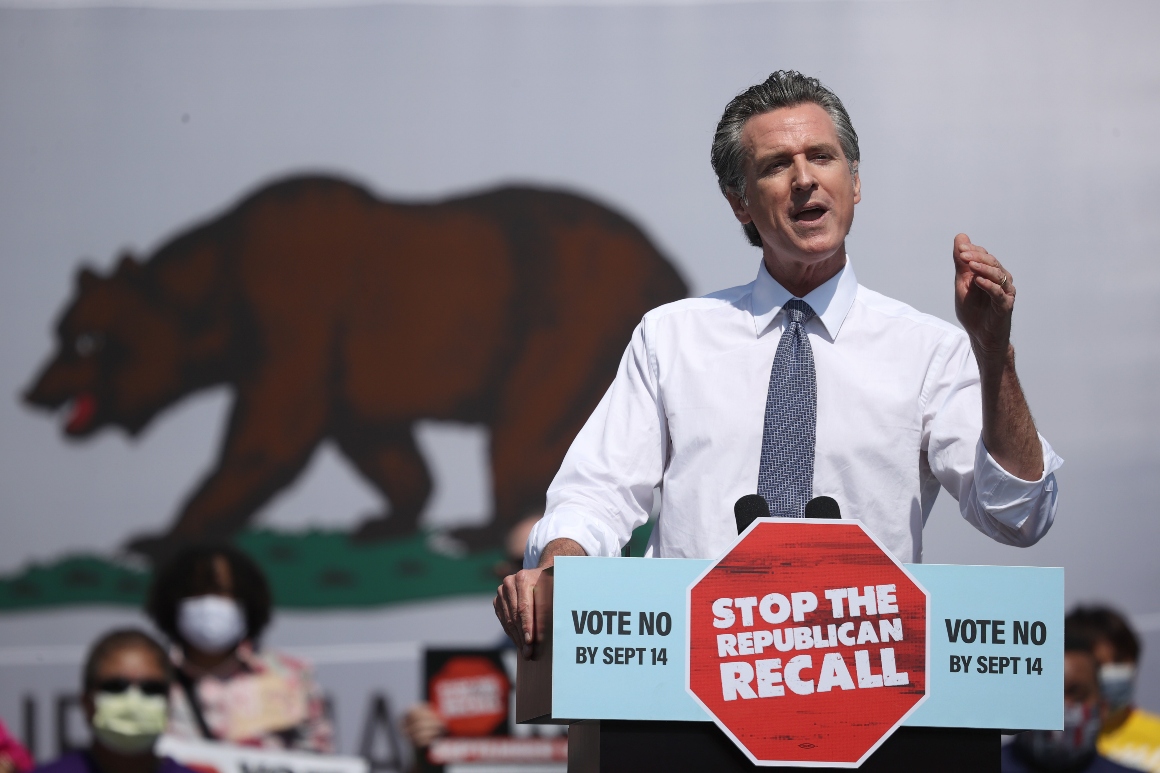 The California governor spent weeks warning of the mortal danger posed by the GOP-driven recall election. He whipped Democrats into a tizzy over turnout worries. He called in Joe Biden, Kamala Harris and even Barack Obama to help.

Now, with the big vote just days away, Newsom seems more relaxed — more confident. Back in the confines of the San Francisco Mission District neighborhood that helped launch his career in the days before tech giants had taken over the city, he let himself admit that things — for once — are trending in his direction.

“I’ve been out in every part of the state, and you sort of feel, you don’t intellectualize, you feel where you are, you get a sense,” Newsom said during a wide-ranging interview with POLITICO. “And I feel like we’re in a really good place right now.”

He has reason to feel that way: Poll after poll in recent days say he’s going to win. The recall to defeat him will go down by double digits. His message to Democrats — don’t even bother picking a candidate to replace him — seems to have sunk in.

The Republican outrage over his pandemic restrictions, the ill-timed dinner party at the elite French Laundry restaurant, all the ugly moments that got him here seems to be fading. At least that’s what he thinks.

The governor spoke freely about his campaign in a warehouse at the Mission Language and Vocational School, the “city hall” of the heavily Latino district that provides meals, legal aid and other support to thousands of immigrants. It was familiar and hallowed territory to the former mayor — who motioned to a large portrait of him and Rosario Anaya, the late iconic immigrant advocate, that hung in the space, garlanded with flowers.

“Rosario had my back,” he said.

Those days, Newsom roamed the city and connected more intimately with voters, sitting in local bistros, walking the Tenderloin — not cruising through in a massive SUV with blacked-out windows, not living in a suburban mansion overlooking the river as he does now near Sacramento.

Now 53 and a decade removed from being San Francisco mayor, Newsom is a Democratic governor who won in a landslide in a state that hasn’t elected a Republican executive since 2006.

And yet, the peculiar nature of California’s recall and the widespread frustration of the last 18 months has put the state one special election away from electing conservative radio talk show host Larry Elder. If a majority of voters oust Newsom — and the complaint list has grown long during the pandemic — Elder could take office with a small plurality on a second ballot question simply by appealing to right-wing Republicans.

Even some recall proponents now concede that the governor is likely to win. Anne Dunsmore, campaign manager for recall committee Rescue California, said Wednesday that even if Newsom survives, the campaign has wounded him and exposed his vulnerabilities.

“I will declare victory today, and maybe it’s not that we got the most votes, maybe we don’t get 50 percent plus one, but this governor had to pay attention to what he thought was a fool’s notion,” Dunsmore said. “We’ve won because we’ve made a point and we’ve made it nationally.”

The governor has finally found a message that seems to connect with voters in the campaign’s final weeks: embracing his actions on a pandemic that turned his once-easy first term into a political maelstrom.

Early this summer, Newsom focused on California’s eye-popping $80 billion-plus budget windfall and reopening the state, emphasizing that California was “roaring back.” He stopped talking about the pandemic and turned his attention toward people returning to everyday activities.

But in the campaign’s final weeks, the governor has embraced his Covid-19 rules as a selling point.

Newsom was the first governor in the nation to require that all students wear masks in schools, including those who are vaccinated. That drew some criticism and at least two lawsuits, but he later felt vindicated when the Centers for Disease Control and Prevention adopted the same recommendation. The governor has also mandated that all state workers, health care workers and school employees get vaccinated, with some exemptions.

“This is not on-the-job learning,” Newsom said. “You don’t need, in the middle of this pandemic, someone to come in and spend two months on a transition and all of a sudden have a reelection, figure out who’s this HHS person versus DPH.”

Newsom said he has no intention of imposing shutdown restrictions again on restaurants or other businesses. And he wants classrooms to remain open.

But he says he can only guarantee that if people wear masks indoors and mandate vaccines in certain cases — policies that his Republican challengers oppose.

“The fastest route to distance learning, going back to where so many states were last year, is voting ‘yes’ on this recall,” Newsom said.

The governor says the recall has taught him that democracy is in more peril than he ever thought possible. California’s recall process dates back more than 100 years, to an era when direct democracy was considered the only antidote to powerful special interests that controlled Sacramento. Republican candidates make the same argument today, suggesting that unions and businesses have undue influence over the state’s Democratic supermajority Legislature and statewide leaders.

But Newsom sees California’s recall process — one that could potentially allow a small minority to elect his replacement if the overall majority removes him — as “remarkable.”

“This is like a Faberge egg so to speak, in terms of democracy,” he said. “It’s not a football, you can’t throw it around. It’s delicate, democracy is delicate. I didn’t realize how delicate it was, and now I’m starting to appreciate how delicate it is, and how important this race is, not just for me.”