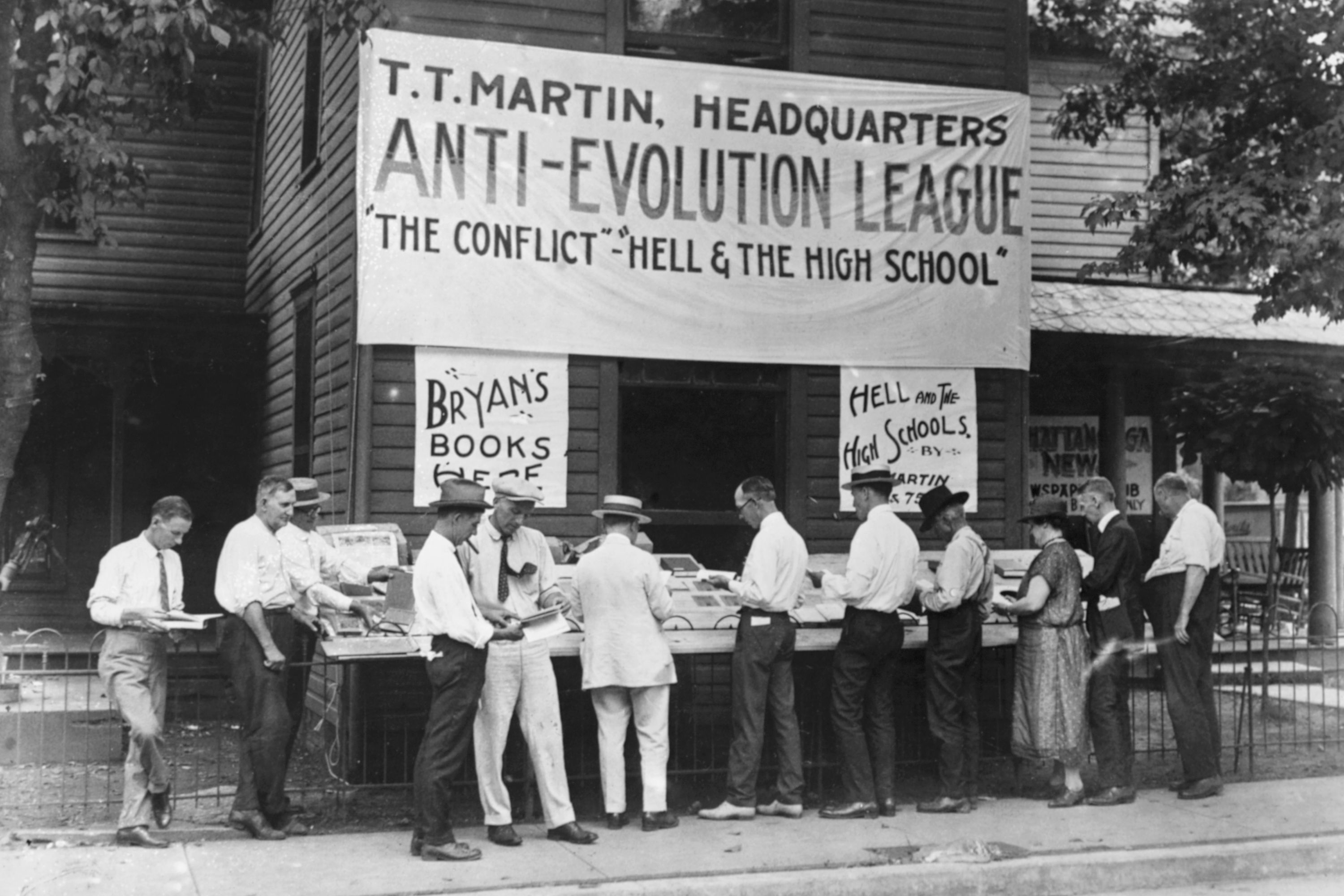 In 1996, Christian Right leader Ralph Reed issued a statement that would become political scripture for religious conservatives. “I would rather have a thousand school board members than one president and no school board members,” Reed declared. By winning school elections, the theory went, conservatives would also win America’s battles over evolution instruction, sex education and school prayer.

Last May, former Donald Trump adviser Steve Bannon made a similar comment on his podcast. “The path to save the nation is very simple — it’s going to go through the school boards,” Bannon predicted. But Bannon pointed to a very different set of issues: critical race theory and the 1619 Project. He didn’t mention religion at all.

As angry parents converged on school boards in recent months to decry anti-racist curricula, headlines blared about the culture wars’ return to schools. In fact, these conflicts never left. They instead changed their focus, alternating between religion and history (and lately epidemiology). Our most contentious battles used to concern God and his role in the universe. Now they’re about the nation, and what we want it to be.

That would be fine — indeed, it would be fantastic — if we shared a common language and vocabulary for deliberating these differences. We could explore them in our classrooms, asking students how they imagine America: past, present and future. But we are splitting into mutually hostile tribes, which makes real conversation almost impossible. What should be a teachable moment for our children has become another dividing line between their parents. Even the question of masks in schools is now a take-no-prisoners struggle, pitting different versions of America against each other.

To be sure, we have always fought over who we are. In the 1920s, most notably, the Scopes trial triggered a campaign by fundamentalist and evangelical Christians to block the teaching of evolution. Yet fierce history wars also flared during these same years, as ethnic and racial minorities joined hands with white patriotic societies to blast textbooks that allegedly undermined the Founding Fathers. By emphasizing the economic motivations for the American Revolution and the Constitution, the argument went, history books diminished the grandeur of the nation itself.

Most of all, such interpretations had the potential to demean the multiethnic heroes who contributed to the new republic’s creation. Polish-Americans lionized Thaddeus Kosciuszko, who came over from Europe to assist the Revolution. German-Americans praised Molly Pitcher, born “Maria Ludwig” (they said), who allegedly took up her husband’s position behind a cannon when he fell. African Americans celebrated Boston Massacre victim Crispus Attucks, the first American to die in the Revolutionary cause. And Jews were proud of Haym Salomon, a Philadelphia merchant who helped finance it.

All of these groups wanted to burnish their role in the nation’s founding, so they blocked any effort to question its broader themes of freedom and progress. Making the Revolution less heroic would devalue the diverse heroes who fought in it, or so their advocates feared.

A similar pattern unfolded during the civil rights movement of the 1950s and 1960s, when African Americans won the removal of racist textbook material — including passages praising slavery — and the inclusion of a wider array of Black luminaries. Hispanic and Asian and Native peoples followed suit, demanding that their children have a chance to “see themselves,” or at least their heroes, in history books.

As before, however, these new figures were mostly folded into the old story. Even as the textbooks embraced diversity, their titles remained the same: Quest for Liberty, Rise of the American Nation, and so on. That was the modus vivendi of the History Wars: “each ‘race’ could have its heroes sung,” as the New York Times observed in 1927, so long as no group questioned the underlying melody that united them all.

Religious conflict in schools was different, because it could not be tempered in this additive, come-one-come-all fashion. Either human beings evolved from other mammals, or they did not; either Christ was the Messiah, or he wasn’t. So the Religion Wars were more vehement — and more enduring — than the History Wars of the past.

Several states continued to ban evolution instruction until 1968, when the Supreme Court ruled that such laws violated the First Amendment’s separation of church and state. Anti-evolutionists switched gears after that, winning measures that required “equal time” — for evolution and Biblical creation — until the court struck them down, too. Then came efforts to teach that the scientific record demonstrated “intelligent design,” which a federal judge ruled unconstitutional in 2005.

Likewise, school prayer and sacramental Bible reading were struck down by the courts in the early 1960s. But schools found ways to continue both practices. Some of them introduced prayers at football games, which would “bootleg” worship into schools (as advocates openly quipped) even after the courts banned it; others offered courses on the history and literature of the Bible, which often served the same purpose.

Finally, sex education exposed enormous religious rifts in America’s body politic. To conservative critics, school-based instruction on the subject threatened to violate Scriptural injunctions against sex outside of marriage. They especially objected to discussions of abortion, contraception or homosexuality in schools.

But the Religion Wars started to cool in the late 1990s, shortly after Ralph Reed called upon his flock to flood into school boards. As one Florida religion reporter observed in 2008, evangelical families trying to get their children into college didn’t believe that the earth was a few thousand years old. And even if they did, they were unlikely to stick their necks out for it if that might hold their kids back.

Conservatives who still cared about evolution — or school prayer, or sex education — increasingly exempted themselves from the public schools altogether, patronizing Christian academies or simply homeschooling their children. That meant less pressure on school boards, at least around religious questions.

By contrast, the History Wars gained steam. The 2008 election of Barack Obama — the nation’s first African American president — fueled the growth of the Tea Party, whose overwhelmingly white members feared “losing the nation they love,” as one leader in Virginia explained. Fox News host Glenn Beck launched “Founders Friday” in 2010, devoting the first show in the series to the leader of the original Tea Party: Sam Adams. Beck even outfitted his TV studio with a blackboard and old-fashioned desks, conjuring the one-room schoolhouse of yesteryear.

Out in the real schools, meanwhile, conservatives denounced ethnic studies courses as “divisive” and “un-American.” They also challenged the College Board’s revised Advanced Placement course in United States history in 2014, which reduced material about the Founding Fathers while adding new information about slavery, the internment of Japanese-Americans during World War Two, and other so-called “negative” aspects of the past.

The election of Donald Trump in 2016 completed the transition from Religion Wars back to History Wars in our schools. To satisfy evangelical voters, who supported him in extraordinary numbers, Trump did rescind an Obama-era order that schools allow transgender students to use the bathrooms of their choice. But amid threats of corporate boycotts, states considering bills to limit transgender access quickly backed off them; business opposition has also complicated the efforts of some GOP-controlled states that targeted transgender student athletes.

Similarly, the Trump administration tried to cancel federal grants to groups providing lessons about contraception. But the courts intervened, ruling that the White House could not withdraw promised funds simply because it objected to how they were used. Some Christian conservatives sponsored “opt-out” campaigns, urging parents to withdraw their children from sex education classes. The very need to exempt themselves suggested that they had lost the larger struggle over the subject.

Yet the History Wars flared as never before, sparked by a president who pledged to “Make America Great Again.” Trump’s 2016 campaign slogan was inspired by a similar phrase used by Ronald Reagan in I980, “Let’s Make America Great.” The difference was subtle but significant: whereas Reagan pointed to a sunny national future, Trump called on the country to revive a lost past.

After neo-Nazis rallied to defend Confederate statues in Charlottesville, Va., in August 2017, Trump defended the statues and also vowed to retain the names of military bases named after Confederate generals. And when the New York Times released its “1619 Project,” which dated America’s founding to the arrival of its first African slaves, Trump announced a “1776 Project” to defend traditional accounts of America’s origins and development.

Meanwhile, conservatives around the country streamed into school board meetings to denounce the 1619 Project and critical race theory, which holds that racism is baked into America’s political, legal and social institutions. As the right correctly sensed, these ideas reflected a fundamental challenge to the grand national narrative. The 1619 Project did not simply add diverse people to the old American story of freedom and liberty; instead, it questioned the story itself. Critical race theory doesn’t just ask us to consider the role of racial minorities in American history; it suggests that racism is an ongoing feature of that same history.

Steve Bannon is right: The road to saving the nation runs through our schools. The real question is which parts of the nation we want to save, which we wish to discard, and why. That’s an issue that affects all of us, whether we patronize the public schools or not. And that’s also why so many indignant citizens have protested at school board meetings, insisting that their version of America is the right one for everybody.

Can we agree to disagree about that? Can our schools present multiple views of the nation? At the height of the Religion Wars, combatants on both sides claimed that there was no room for compromise. The truly scary prospect is that our ideas of America are becoming quasi-religious beliefs in their own right. And we lack enough faith in public education — and in ourselves — to let students sort them out on their own.