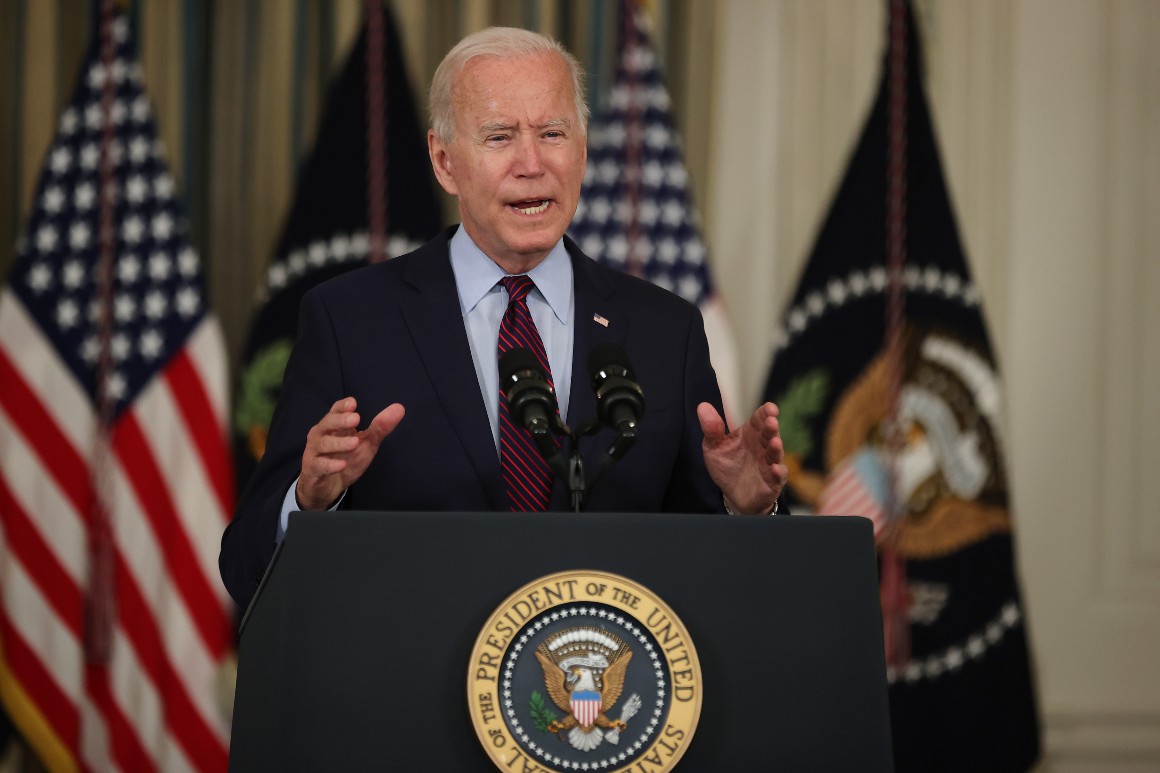 Joe Biden indicated late Tuesday he was warming to a Democratic proposal to blow up the rules of the Senate to raise or suspend the debt ceiling, amid fears that a breach would send the U.S. government into default and the whole economy into a tailspin.

The president told reporters that a filibuster carve out to solve the current stalemate with Republicans over the debt limit before the estimated Oct. 18 deadline was a “real possibility.” It was a remark that sources inside the administration said reflected the growing belief that the party may need to take drastic steps to prevent default. It also served as a signal to Senate Democrats that the president supports their own growing conviction that a change to the chamber’s rules may be needed to head off a financial crisis.

Should Senate Democrats go down the filibuster reform route, they would need all 50 senators and Vice President Kamala Harris (as a tie-breaking vote) to offer their support. That is hardly guaranteed given opposition to filibuster changes from some moderate members, including Sen. Joe Manchin (D-W.Va.).

But Biden’s remark suggested momentum for the act is increasing. It came as the president was returning from delivering his sales pitch for infrastructure and social spending plans in Michigan and as the White House increasingly tries to shame Senate Minority Leader Mitch McConnell for the debt ceiling brinkmanship. On Wednesday, Biden is scheduled to join business leaders at an event on the matter.

“Any scenario is possible to fix the debt ceiling right now,” a person familiar with discussions among Democratic leadership told POLITICO. “Everything is on the table. Every option.”

Republicans have twice thwarted efforts to raise the debt ceiling to avoid an historic default and are on the precipice of doing it again in the Senate on Wednesday, when another bill to raise it will be considered. After voting to raise or suspend the debt ceiling three times under former President Donald Trump, McConnell is refusing to provide Republican votes to solve the looming default in order to inflict political pain on Democrats.

Failure to address the debt limit, a step required by law that at various times has been treated as routine, would tank the country’s credit, raise interest rates and impact social security checks. But for months, McConnell has pressured Democrats to act on the debt limit on their own through the complex budget process known as reconciliation. It’s a step Biden and Senate Majority Leader Chuck Schumer have long resisted because it would take up precious Senate floor time — but nonetheless is a filibuster-proof way around the issue.

While Democrats closely aligned with the Biden administration have urged it to use whatever avenues are available, White House officials had repeatedly said that Biden continued to oppose creating filibuster carve outs, also known as the “nuclear option,” to address the debt ceiling or other legislative deadlocks.

“The debt limit needs to be raised. The best would be to do it in a bipartisan manner, but if that’s not possible the Democrats should figure out whatever way works for them,” said Jason Furman, who served as a Council of Economic Advisers chair for former President Barack Obama. “Economically, the outcome is the same whether it is the nuclear option, reconciliation or some other way.”

Biden’s softening on the issue could have vast implications on his broader agenda, provided he convinces Manchin and others to go along with him. There is a long backlog of liberal priorities that have run up against a Republican blockade — from gun control to immigration to voting rights. If Democrats create a filibuster carve out for the debt ceiling, it could embolden progressives to argue that exceptions should be made for other congressional matters as well.

“Maybe corporate lobbyists can urge Senator Manchin to change his mind on it, if the rest of us can’t,” said Faiz Shakir, a Democrat strategist who managed Bernie Sanders’ 2020 presidential campaign, alluding to the pressure on lawmakers from the business world.

Yet, with less than two weeks to go before the debt ceiling is breached, operatives within the party are skeptical that senators will ultimately scrap the filibuster rules at this moment. Biden’s comments, however, have matched the sentiment among most Democratic senators to call Republicans’ bluff and force them into voting to suspend the debt limit, or take what a growing number of them view as the next logical step.

“The logic of McConnell’s argument is essentially telling Democratic senators to abolish the filibuster,” Shakir added.