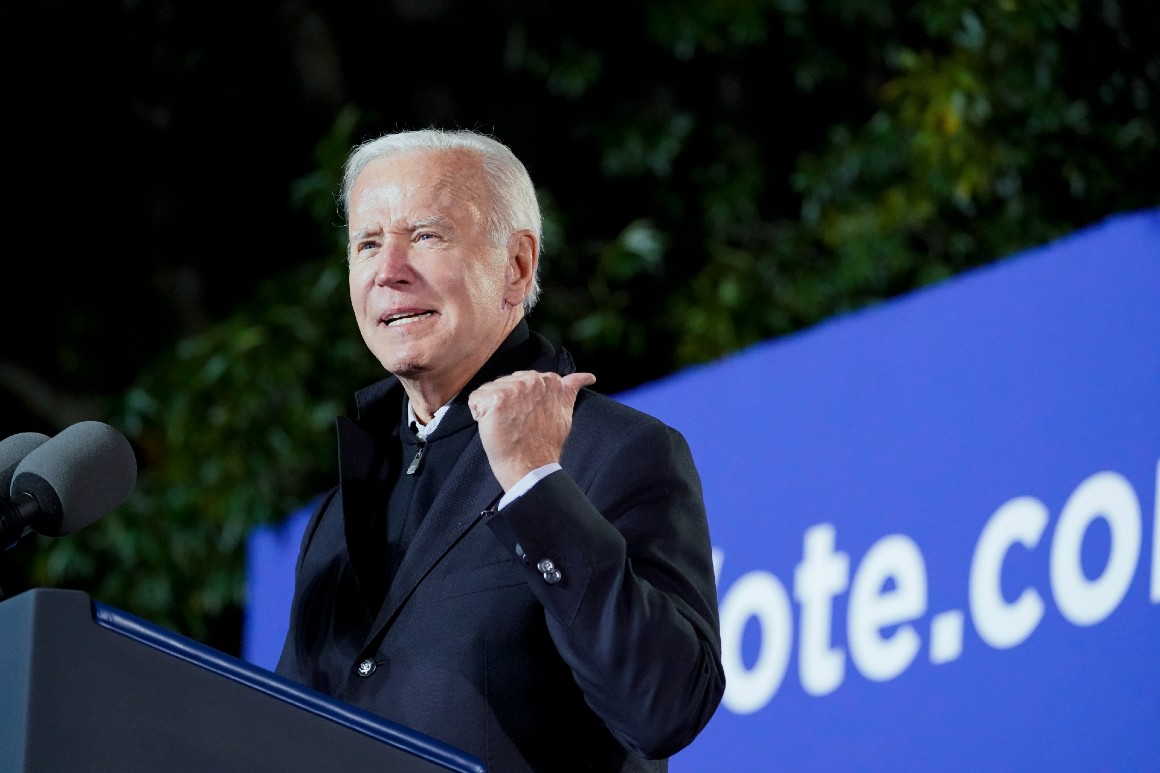 The last time Virginia and New Jersey elected governors in 2017, then-President Donald Trump was nowhere to be found. With his approval rating below 40 percent, neither GOP nominee wanted him anywhere near their campaigns.

Fast forward four years and Joe Biden’s poll numbers aren’t much better. Yet Democrats have welcomed Biden on the campaign trail. Virginia Democrat Terry McAuliffe and New Jersey Democratic Gov. Phil Murphy both appeared on stage with him this week. Elsewhere, other Democrats have been happy to greet the president upon his arrival in their states and be seen with him in front of voters.

It’s a departure from political custom, which typically sees candidates dodge unpopular presidents in an effort to avoid being associated with them. It’s also a sign that Biden’s grip on his party remains strong — even at a time when his agenda has been stymied and his overall popularity has nosedived.

“He is just not in any way the kind of toxic waste dump that Trump became,” said Matt Bennett of the center-left group Third Way. “I would guess that even if Biden isn’t over 50 [percent public approval] next year, you’re going to see him campaigning with a ton of congressional Democrats.”

Four years ago, the off-year campaigns preceding the midterm elections not only foreshadowed the GOP’s collapse in 2018, with Democrats reclaiming the House, but also suggested the damage that Trump himself could inflict down ballot on the GOP, especially with independent and suburban voters. Running in the off-year elections, Republicans Ed Gillespie and Kim Guadagno, in Virginia and New Jersey, respectively, were the first Republicans to see it — and to keep Trump at an arm’s length. In Virginia, Trump became the first sitting president since Richard Nixon not to campaign in the commonwealth’s governor’s race.

Biden may ultimately prove just as damaging to the Democratic ticket in 2022. His standing with independents, a critical constituency in competitive House races, has plummeted nationally. Americans are blaming Biden for inflation, he still does not have an infrastructure deal in Congress, and more than 60 percent of voters say the country is off on the wrong track.

With the party out of power in the White House traditionally losing seats in a president’s first midterm elections, McAuliffe acknowledged last month that his campaign was “facing a lot of headwinds from Washington.” He told supporters on a video call that “the president is unpopular today, unfortunately, here in Virginia, so we have got to plow through.”

One Democratic strategist who manages House and Senate races said that given Biden’s dismal polling, he would advise his candidates not to get anywhere near the sitting president.

“There’s just no evidence that Biden is a net positive in the suburbs,” he said.

But Biden, so far, has not been shunned. In Virginia, where Biden beat Trump by more than 10 percentage points last year, many of the state’s most prominent Democrats participated in a photoline with the president Tuesday, including five House Democrats from across the state.

Two weeks earlier, Connecticut’s entire congressional delegation, the governor and the mayor of the state’s largest city — all Democrats — greeted Biden at the Hartford airport when he arrived for a day of events promoting his Build Back Better Agenda.

A McAuliffe adviser said the campaign did not even discuss the possibility of keeping Biden away. Even if Biden’s approval rating has fallen in Virginia, the adviser noted that among Democrats, he remains a “likeable figure people trust.” It’s that Democratic constituency McAuliffe is laboring to turn out.

In New Jersey, similar forces are at work. Five House Democrats were present for Biden’s appearance with Murphy Tuesday, including Rep. Tom Malinowski, who won his district by slightly more than 1 percentage point last year and who is expected to face a difficult reelection in 2022.

Biden’s approval ratings “may be sagging with independents, but he is still quite popular with Democrats,” said David Axelrod, the former Barack Obama adviser. “If you believe this is a close election, in which motivating your base is essential, deploying Biden makes sense.”

He added, “It will mean even more if the House passes the economic bills this week and Biden can sign the infrastructure bill.”

Republicans nationally believe Biden will be an albatross for Democrats next year. Sen. Rick Scott, chairman of the National Republican Senatorial Committee, told reporters on Monday that “he’s our best asset right now.”

But unlike in previous midterms, Republicans attempting to nationalize the elections in 2022 will not have a clean shot at Biden. That’s because Trump, the, twice-impeached former president, continues to insert himself in the midterm campaign. In that climate, Democrats may find it useful to trot out Biden as a reminder of the alternative.

In Virginia, Trump’s looming presence has turned the traditional, bash-the-president midterm dynamic on its head, with Democrats embracing the Biden-Trump contrast and Republicans seeking to localize the election.

McAuliffe’s opponent, Glenn Youngkin, slammed Biden on the news that he would be campaigning in the state. But he has not made anti-Biden rhetoric a major feature of the campaign, focusing instead on education, public safety and attacks centered on McAuliffe, not Biden.

A Youngkin adviser said that with internal polling suggesting McAuliffe is less popular than Biden in the media markets they are focusing on, “you have a much better electoral setup against McAuliffe than [turning the race into] Biden against Trump.”

On the flip side, for a McAuliffe campaign that is focused primarily on turning out its Democratic base, Biden offers a ready-made reminder of one of the party’s primary motivating factors: Trump.

“Biden is coming because there’s very few undecided voters left,” said Joshua Ulibarri, a Democratic pollster who has polled in Virginia. “This is all about turnout now. There are more of ‘us’ than them if we turn out. Biden was a man with a plan and is a reminder of the Trump threat.”

If either campaign believed that there was a sizable portion of the electorate still up for grabs, an appearance by Biden could present some risk to McAuliffe. But in a hyper-polarized era of politics, vanishingly few voters are persuadable. The bigger challenge for Democrats is an enthusiasm gap in Virginia, with polls suggesting that Republicans are more energetic about voting in the contest.

The sitting president can be especially persuasive to voters who might otherwise sit out, especially in Northern Virginia’s heavily Democratic Washington suburbs, whose proximity to Washington renders the region especially sensitive to national politics. Voters working in the federal government or its attendant industries may be paying far less attention to the goings-on in Richmond than in the nation’s capital — especially young, Democratic-leaning transplants from other states.

“Having the sitting president come out and support you is so important because these people’s lives revolve around federal politics, not state politics,” said Ben Tribbett, a longtime Virginia-based Democratic strategist. “Biden is popular among the Democratic base in Northern Virginia.”

Of Biden’s campaigning in the state, he said, “I think it will energize people to go to the polls.”