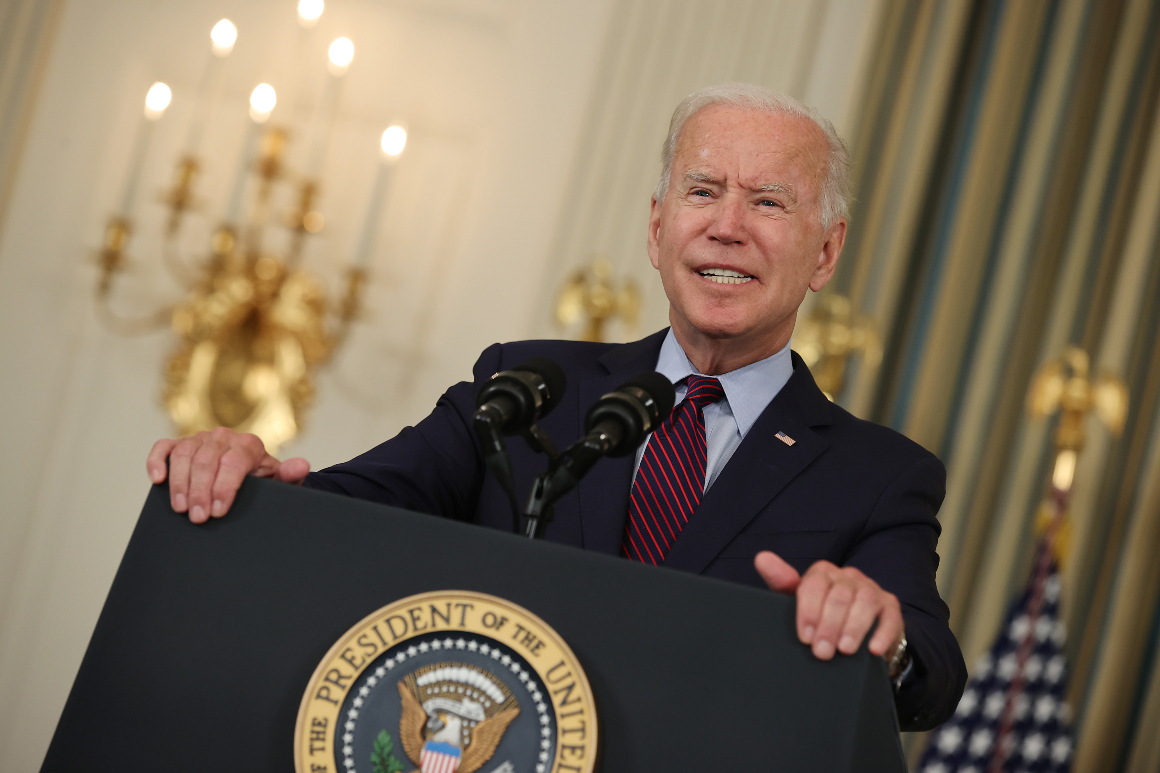 After months of playing it cool on the debt ceiling, the White House has quickly begun to turn the screws on Republicans in an attempt to shift blame for the financial brinkmanship squarely onto Senate Minority Leader Mitch McConnell.

President Joe Biden entered the escalating standoff on Monday to declare that Senate Republicans were being “hypocritical, dangerous, and disgraceful.” White House press secretary Jen Psaki charged that Republicans under President Donald Trump spent like “drunken sailors” and unveiled a chart comparing the debt they incurred. The White House is also planning to dispatch more surrogates to deliver their debt ceiling message on TV this week, with hopes of framing the debate as one between a Senate minority leader blocking avenues to avoid default while the administration offers swift resolutions.

The latest gambit comes after GOP lawmakers led by McConnell twice thwarted efforts to raise the debt ceiling to avoid an historic default, and continue to insist they’ll do nothing to make it easier for Democrats. And while Biden warned that fiscal cataclysm was a real possibility — entertaining the idea that the debt ceiling would be breached — his allies on Wall Street seemed fine, at least in the interim, with Democrats not backing down.

“To me this is insanity that Republicans who talk like they are so pro-business are screwing around with the full faith and credit of the U.S. government,” Robert Wolf, the former chief executive of UBS Americas and Obama economic adviser, said in an interview. “This shouldn’t be the polarizing issue that everyone is talking about and working on. You want to have a fight over policy — infrastructure and climate action and healthcare benefits — then have that fight. But I don’t think you want to have a fight over the debt ceiling.”

The White House’s new, more combative posture in the debt ceiling standoff is a concession of sorts that their earlier approach has not yielded the desired results. The administration had resisted dealing with the issue through earlier legislative vehicles out of hope that at least 10 Senate Republicans could be pressured by the business community and Wall Street to vote to lift or suspend the debt ceiling to avert a fiscal catastrophe. When that began to look improbable, Democrats tried to do it by majority vote, only to encounter GOP resistance. Now, with the deadline for default less than two weeks away, there is little private or public optimism inside the administration that the resolution will be anything but a nail-biter.

While acknowledging they would far prefer using other avenues, White House officials said Monday that they aren’t ruling out the possibility of raising the debt ceiling though the budget process known as reconciliation, which McConnell has been urging them to do for months. But they’re worried that Republicans, who themselves voted to raise the debt limit by trillions under Trump, will use that opportunity to burn precious floor time in the Senate, and Biden himself described that path as risky, complicated, and cumbersome.

“If you don’t want to help save the country, get out of the way so you don’t destroy it,” he said Monday, wading into the debate after administration officials had strategically deployed several other key officials to drive home the urgency — all to no measurable avail.

The White House and Republican leaders have both said there’s no negotiation to be had over the limit, leaving only a few potential resolutions. Republicans could cave. Democrats could reverse course and change the rules of the Senate to pass a debt ceiling hike with just 50 votes. Or, if Democrats conclude that they’ll have to pass it via reconciliation, as many suspect will happen, Republicans could agree to throw up fewer time-sucking barriers to gum up the process.

Though he has said the debt ceiling will be — and should be — raised, McConnell has made it clear he wants no part in helping Biden, and insists Democrats must go it alone after he gave them “nearly three months’ notice to do their job.”

Wolf isn’t surprised that Wall Street and industry pressure has yet to move with Republicans, he said, in part because business titans themselves believe there will be a resolution. But what’s troubled him beyond white-hot rhetoric and lack of bipartisanship, even on handling past debt, is the lack of deference shown to Treasury Secretary Janet Yellen, who has repeatedly warned that the country could suffer from an accidental default if the limit isn’t addressed, and soon.

“The idea that they are ignoring her calls seems just totally off base,” Wolf said, calling Yellen experienced and level-headed and not someone who would “cry wolf.”

On Monday, Biden joined Yellen in talking up the kitchen table repercussions of a default: Sending the economy over a cliff, he said, risks jobs and retirement savings, Social Security benefits, salaries for service members and benefits for veterans, among other items.

Despite going nowhere with Republicans, administration officials and their close allies believe they’re making a mark with the public. As evidence, Democratic Party officials pointed to a long list of editorials and opinion pieces from key swing states that blame Republicans for the standoff. Their belief is that a fight long viewed as a Beltway obsession with disastrous consequences for the economy is now resonating with ordinary Americans.

Republicans, meanwhile, are making two bets of their own. The first is that the public won’t be able to differentiate between traditional debt and the arcane rules around the little-understood debt ceiling. The second is that if the economy were to suffer, voters will blame the party in power.

Faced with these prospects, some progressives are wishing the White House would go much further — and think more creatively — than it is currently doing. Josh Bivens, director of research at the Economic Policy Institute, a left-leaning think tank, said he’s come to prefer a route specified by some Democrats that would punt the debt limit years and years into the future.

“Just raise it to an absurd number,” he said, “and tell people ‘Yeah, we effectively abolished it, and now we’re like every other rich nation on earth in that we’re not afflicted by this dumb law anymore.’”

Bivens said he understands that Biden and the White House are taking as tough a stance as possible to make Republicans take some of the political hit for raising the debt limit. But he warned that the administration had better be ready to unilaterally neutralize the threat, either by minting platinum coins or just ignoring the limit and continuing to issue debt and daring somebody to stop them. Both are options White House officials have said they won’t, or can’t, do.

“In the end, I think everybody is frantic about avoiding a political ‘hit’ from this that is not even a love tap,” Bivens concluded. “I just don’t think that people care about the debt limit. They care about the economy and how their lives are going.”