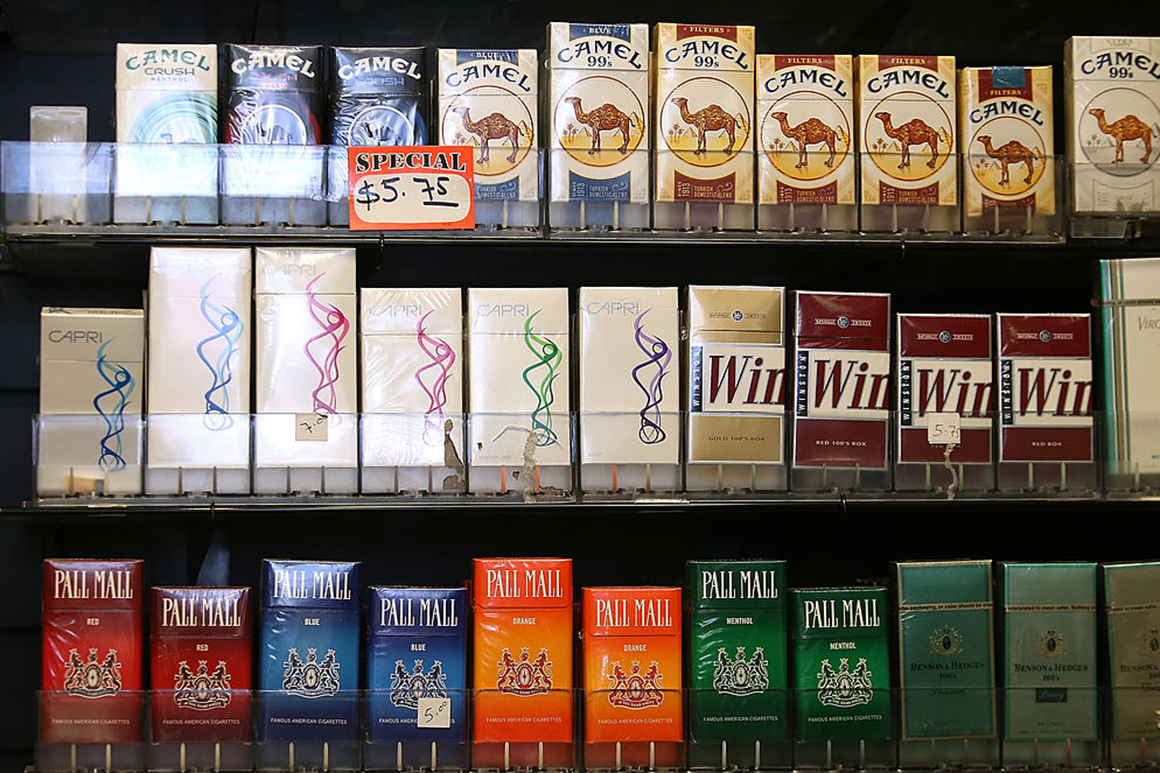 A group tied to major cigarette manufacturers is warning Congress that if lawmakers tax tobacco to help pay for President Joe Biden’s domestic agenda, suppliers will market smokes to children.

That was the not-so-subtle message made last month by a coalition of trade associations, including the National Association of Convenience Stores, as Congress began hammering out the specifics of the president’s Build Back Better bill.

Though the e-cigarette and tobacco company names aren’t directly on the letter, the convenience store association counts as its members some of the biggest names in the industry: Altria Group, Reynolds American Inc., and JUUL Labs — the e-cigarette giant that has faced a myriad of probes of its own into whether the company has marketed toward children. Just this week, in fact, the trade association announced that top executives from the tobacco and vaping companies had taken on a leadership position in the lobby group.

In the letter, dated Sept. 14, the trade associations argued that if the price of tobacco products spikes, buyers would move to the tobacco black market where sellers don’t abide by standard regulations and often prey on young people.

“When the price of a product rises too much too fast, illicit purveyors will seize the opportunity to exploit and take advantage of current users and entice new users without discriminating based on age,” the letter read. “This undermines the responsible measures our retailers have taken and creates a problem for society as a whole.”

The warning is one of the most public cases of pushback from the tobacco industry as it finds itself once more being targeted by Congress. For years, lawmakers have scrutinized the industry over its marketing that targets young adults and children. Numerous state and federal legislative initiatives have been launched to clamp down on tobacco, including by taxing its products, as Democrats have proposed to do as part of Biden’s social spending bill.

Still, the use of tobacco products among minors remains widespread. Late last month, the Food and Drug Administration and Centers for Disease Control and Prevention released a study that found an estimated 13.1 percent of middle and high school students reported using e-cigarettes within the last 30 days.

For that reason, those on the Hill may be reluctant to believe advocates who claim that changes to the tobacco industry’s bottom line threaten minors’ well-being. But in hiding behind the convenience store group and others, Big Tobacco can effectively argue their case without putting their names directly on it.

Jeff Lenard, vice president for strategic industry initiatives at the National Association of Convenience Stores, told POLITICO in an email exchange that his organization is led by and represents retailers, a fact that is made clear to its suppliers. The Supplier Board — whose members now include the smoking executives — serves as an organized voice for the suppliers in the association’s affairs, he added.

But Erika Sward, assistant vice president of national advocacy at the American Lung Association, maintained that the tobacco industry often utilizes front groups to make its points. She said that, contrary to the messaging, raising taxes is effective at reducing use of their products.

“Very predictably and very unfortunately, this letter goes right to what the industry always argues when a meaningful and effective proposal is on the table, which is that there’s going to be a black market,” Sward said. “It bears itself out over and over again, but the bottom line is what happens is we have fewer people buying tobacco products especially kids” with higher taxes.

The proposal from Democrats to increase the excise tax on tobacco and nicotine products is one of many pay-fors floated to subsidize the massive social and climate spending bill championed by members of the party. It would effectively double the federal excise tax on small cigars and cigarettes, and it would increase the tax on chewing tobacco from 50.33 cents to $10.70 — more than 21 times its current level. It also establishes a new tax on vaping, or e-cigarettes. Advocates for the changes argue that they would effectively reduce the use of tobacco products, especially among children, and prompt users to quit.

In the letter from the trade associations — which also include the Energy Marketers of America, the National Association of Truckstop Operators, and the Society of Independent Gasoline Marketers of America — the groups argue that the new federal excise tax will not dissuade users of tobacco products and provide new streams of revenue. In fact, they say, it will do the opposite.

“In the illicit market, sellers operate completely outside of the law offering unregulated products to users of all ages,” the coalition stated.

On their face, none of these groups appear to directly serve the interests of the tobacco and nicotine industry, though they surely sell related products. But they have received Big Tobacco’s money. Altria and Reynolds are “Platinum Corporate Partners” of the Energy Marketers of America (a group for businesses that store and distribute fuels and lubricants). Reynolds American Inc. is also listed among the companies that support the National Association of Truckstop Operators and the industry “at the Highest Level.” Altria has sponsored multiple events for the Society of Independent Gasoline Marketers of America and is listed as among the “Gold Partners.”

The Energy Marketers of America “is opposed to the massive tobacco tax increase in the current House reconciliation bill,” said Rob Underwood, the association’s president. “The proposed tax increase will shift tobacco sales into the illicit market and undermine small business retailers who legally offer tobacco products to adult users. Additionally, the proposed increase contradicts President Biden’s promise not to raise taxes on individuals making less than $400,000 a year.”

He did not respond to an inquiry about the tobacco industry’s involvement in its advocacy.

The National Association of Convenience Stores describes itself as the leading trade association for convenience and fuel retailing, whose members include more than 1,500 retailers and 1,600 suppliers. Its letter to members of Congress warning about the possibility of tobacco being sold in illicit markets to younger consumers came weeks before it issued a press release that some of the biggest players in the smoking industry would be joining its supplier board.

That includes representatives from Altria and Reynolds, two of the biggest names in tobacco. Altria is the parent company of Philip Morris USA, the maker of Marlboro cigarettes, and John Middleton, the manufacturer of Black & Mild Cigars (Altria has also made an equity investment in JUUL Labs). Reynolds is the maker of the iconic Camel and Newport brands, among others.

Another member of the supplier board is the senior director of sales and industry affairs at JUUL Labs, among the most controversial players in the smoking industry. In recent years, the company has faced state and federal investigations, alleging that the company marketed to children who are not of legal age to purchase their products.

Altria and Reynolds did not respond to requests for comment. JUUL did not provide a comment before publication.

Less than a month before the press release announcing the membership of the Supplier Board, Lyle Beckwith, senior vice president of government relations at the National Association of Convenience Stores, wrote a separate letter noting that his industry “does not typically take a position on increases to the federal excise tax (FET) on tobacco.” However, this time, his group was outspoken in its opposition to the measure (in an email, he said that it was “erroneous” to assert that the group had only recently become engaged in tobacco policy issues).

“An increase of such magnitude will not dissuade users of the product or raise revenue as intended, but rather push many current users of tobacco and nicotine products to the illicit market,” Beckwith wrote. “In the illicit market, products are unregulated, sellers do not verify age, and taxes are not collected and remitted.”