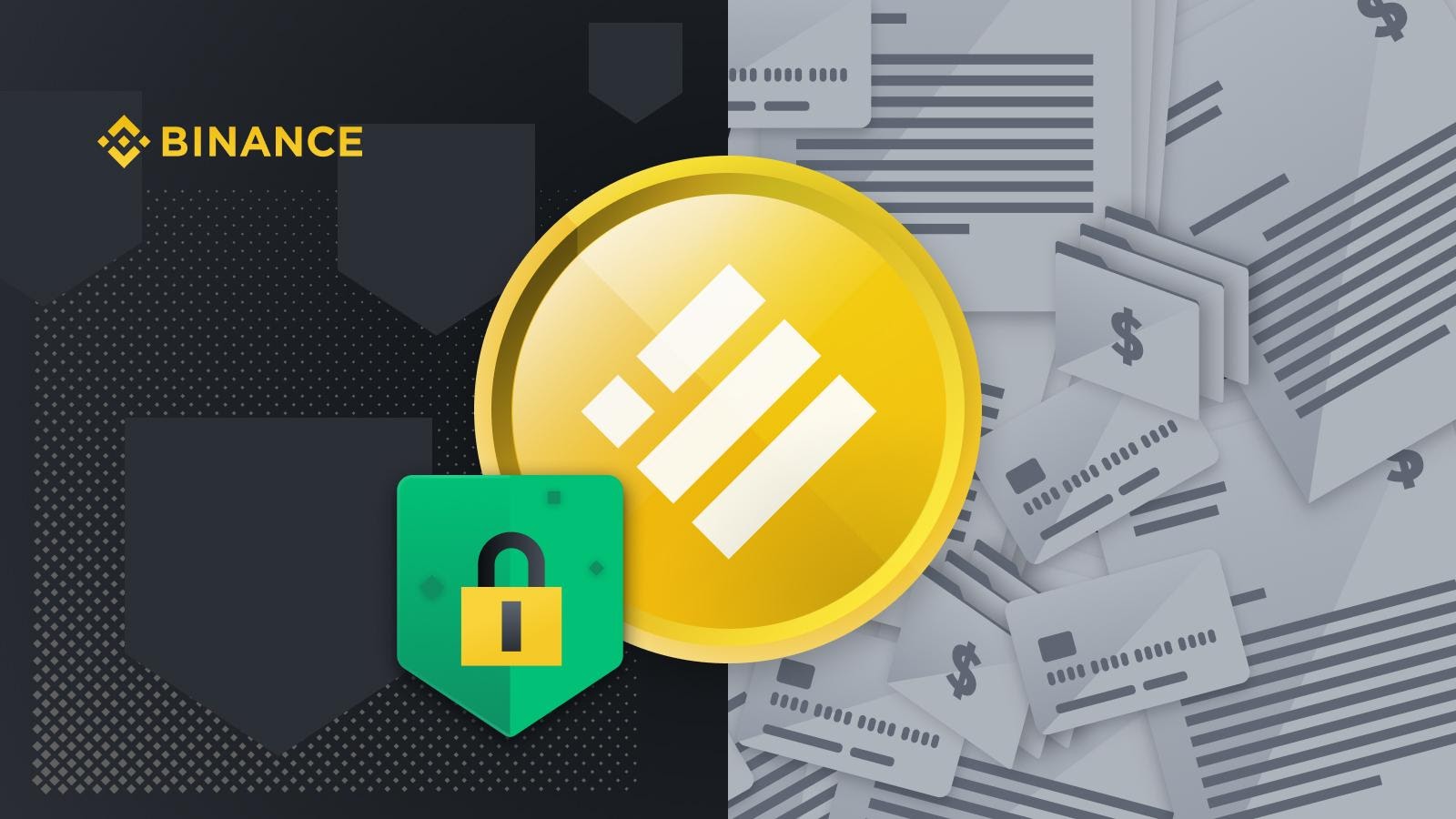 Binance USD (BUSD) has become one of the fastest-growing cryptocurrencies in the world, with a variety of use cases and growing demand amid the continued growth of the crypto markets. A key component to BUSD’s success is its unwavering compliance to the world’s most stringent regulatory standards, ensuring safety and security for all of the stablecoin’s users.

Stablecoins have emerged as major players in the crypto market this year, driven by user demand for flexible liquidity in fiat currency terms. These cryptocurrencies, whose market values are pegged to the worth of certain assets like the U.S. dollar, have also been important assets in the growth of decentralized finance (DeFi). There is $120 billion worth of stablecoins in circulation as of September 1, according to CoinMarketCap.

Amid the rise in demand for stablecoins, various segments of the crypto industry have brought up questions about the veracity of the 1:1 peg of major stablecoins to their backing assets, like the U.S. dollar and other fiat currencies. After all, if the issuers of stablecoins are not able to show that each unit of their tokens can be exchanged for the equivalent amount of the backing asset, there will be serious doubts about the credibility of these tokens, resulting in adverse market effects.

Therefore, when Binance launched BUSD with Paxos in 2019, utmost importance was put towards making sure that every unit of the stablecoin can be verifiably backed with U.S. dollars, therefore giving its users peace of mind and giving more credibility to a stablecoin industry beset by trust issues.

BUSD: A Case Study of Stablecoin Compliance and Safety

BUSD is a 1:1 U.S. dollar-backed stablecoin regulated by the New York State Department of Financial Services (NYDFS), issued by Paxos, a regulated blockchain infrastructure platform. Since then, BUSD has emerged as the third-biggest stablecoin in the world, with a market cap now above $12 billion and a user base of about 1.1 million people.

As a result of BUSD becoming the stablecoin of choice for millions of cryptocurrency users, we see a number of characteristics that show the merits of having a stablecoin that has prioritized user safety and compliance to regulatory and public standards.

As mentioned above, BUSD is one of few stablecoins in the world backed with actual cash. According to a current reserve report from Paxos, 100% of BUSD’s total market capitalization is backed by cash and cash equivalent reserves.

The issuance of Paxos provides a glimpse of the lengths that Binance has gone to ensure that BUSD is an above-board crypto-financial product. BUSD is one of the few stablecoins that provides monthly audited reports of reserves. Everyone can independently verify at specific points in time that the entire supply of BUSD tokens is consistent with USD in reserve accounts at U.S. banks held and managed by Paxos.

Ultimately, the audits and measures that are implemented to verify BUSD’s asset holdings solve one of the main concerns by regulators regarding the existence of actual reserves that back stablecoins.

With stringent measures such as the aforementioned monthly audits, BUSD adheres to the highest compliance standards, particularly by NYDFS, regarded as one of the most stringent when it comes to compliance requirements.

Why is having a regulator essential to the stablecoin business?

In August 2020, BUSD became “Greenlisted” by the NYDFS, making it pre-approved for custody and trading by any of the NYDFS’ virtual currency licensees.

Unlike most stablecoins that claim to be compliant, the BUSD business and its issuer Paxos are regulated by NYDFS, This means:

-The value of each stablecoin token is tied directly to the value of the US dollar, and the amount of “reserve” dollars equal or exceed the number of stablecoins outstanding.

-Regulators are overseeing the establishment and maintenance of reserves backing the stablecoins.

-Reserves may only be held in the safest forms, such as FDIC-insured bank accounts and in short-term maturity US Treasury instruments.

-Reserves are fully segregated from corporate assets, specifically for the benefit of token holders, and are held bankruptcy remote pursuant to the New York Banking Law.

Regulatory oversight is important because it assures stablecoin users that the dollars underlying their stablecoins are secure and will be immediately available when they want them. The NYDFS ensures the Trust companies, like Paxos, and their individual tokens are following its strict rules at all times.

In less than two years since its debut, BUSD has become one of the fastest-growing cryptocurrencies while featuring a variety of utilities, from trading to lending and payments. 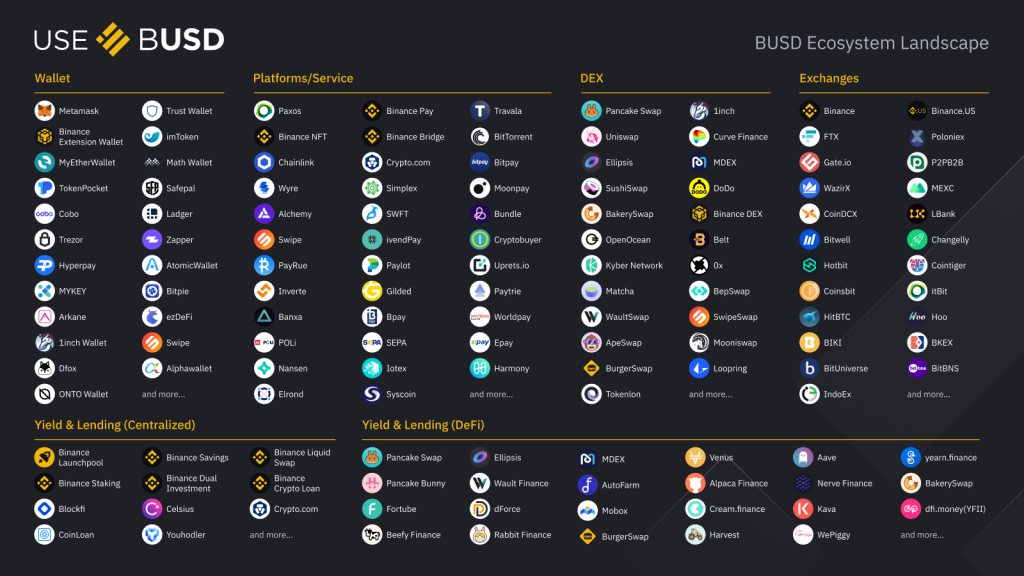 Stablecoins like BUSD play a critical role in the world of decentralization and in providing a solid foundation for the continued growth of DeFi (decentralized finance). BUSD is widely used in Binance Smart Chain (BSC) and Ethereum when it comes to trading, lending, and other scenarios. According to the BSC Project, there are currently more than 400 decentralized applications that support BUSD. On April 21, 2021, the single-day transfer amount of BUSD reached a peak of $261 billion, across 737,000 transactions on BSC.

The combination of ample regulatory compliance, trading volumes, and user interest in BUSD presents a case where private-driven financial innovation via blockchain technology can be pursued while staying compliant with user protection mandates stipulated by the world’s top regulators.

Why Strive for Compliance?

The rise in stablecoins has sparked discussions by regulators regarding the challenges they potentially pose to money markets. Making sure that each unit of a stablecoin can be exchanged for an equivalent unit of its backing asset is a matter of public interest, because deficiencies related to that characteristic can lead to general mistrust in the crypto markets. In the long term, the overall cryptocurrency industry suffers if these concerns aren’t addressed.

With BUSD’s emphasis on compliance, we can safeguard the trust of both users and regulators in stablecoins, while opening opportunities for the private and public sectors to cooperate in establishing stablecoins as an important asset class in the global economy. When more stakeholders show acceptance to stablecoins, particularly trusted ones like BUSD, more avenues for growth opportunities open up.

Ultimately, it takes global cooperation to realize crypto mass adoption, and therefore a better global financial framework. At Binance, we believe in facilitating this in a healthy way, through proactively collaborating with local regulators and leading the industry to a common destination: to benefit and protect users. In a recent virtual press conference, Binance CEO Changpeng “CZ” Zhao said, “Our view is that it’s great for the regulators to be coming in… to get to 10%, 20%, 80%, 99% [crypto] adoption.”

Therefore, it is important for us to maintain BUSD’s status as one of the world’s safest and most compliant stablecoins, for the sake of long-term progress in the industry.