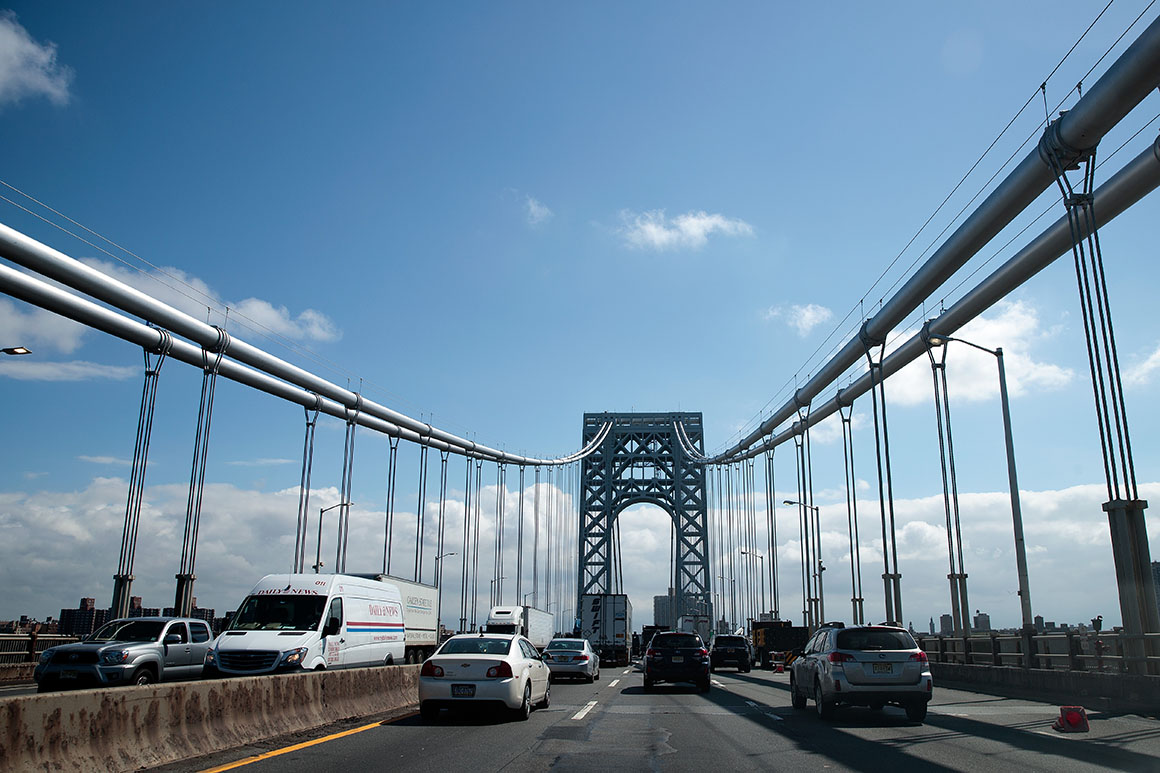 Gov. Phil Murphy says he’s ready to use the “nuclear option” to battle New York’s plan. Murphy, usually a political ally of fellow Democratic leaders in New York, is insisting on toll discounts for New Jersey commuters who drive into New York City. And he is threatening to use his powers to halt business at the Port Authority of New York and New Jersey — one of the few ways a New Jersey governor can get the attention of a New York governor — if he doesn’t get his way.

The dispute is over the New York Metropolitan Transportation Authority’s “congestion pricing” plan, which would charge drivers between $9 and $23 to enter Manhattan’s central business district, south of 60th Street. The tolls are meant to discourage driving, reduce traffic and improve air quality. The revenue from people who keep driving, about $1 billion a year, would help fund public transit upgrades.

Some people see Murphy’s comments as ephemeral bluster tied to his upcoming reelection bid. Others see New Jersey mustering a sustained attack on congestion pricing as a 16-month environmental review of the tolling project begins.

Other New Jersey officials also oppose New York’s plans, but any specific retaliation from the governor was previously unspoken. At one point in 2019, Murphy said he would not summon a full “Jersey attitude” to fight the new tolls. Around the same time, former Republican Gov. Chris Christie said New York was “walking all over” New Jersey on the issue.

That just changed. Asked about the issue last week, Murphy told members of a local chamber of commerce, “We’re not going to relent if New Jersey commuters are discriminated against, period.” Then he made the threat about holding up business at the Port Authority, which oversees the region’s shipping terminals, major airports, the World Trade Center, an interstate subway system and most of the vehicular bridges and tunnels that link New York and New Jersey.

The Port Authority, which is jointly controlled by appointees of the two states, has long been a battleground where governors clashed over their priorities — even before the infamous “Bridgegate” scandal. Still, Murphy’s threat was a surprise from a governor who one of his allies in the fight — Ron Simoncini of the Fair Congestion Pricing Alliance — described as “one of the most sedate people on the planet.”

A senior Murphy administration official said the governor’s request has been consistent and simple: take care of George Washington Bridge drivers by offering them the same credits New York plans to give drivers entering Manhattan via the Holland and Lincoln tunnels.

Members of New Jersey’s congressional delegation have gone further in their demands. Democratic Reps. Bill Pascrell and Josh Gottheimer argue New York is fleecing New Jersey commuters by earmarking all the revenue from the tolls for its own subways and buses.

They argue the tolls would be fairer if some money went to fund the public transit systems that get New Jerseyans to New York in the first place, like NJ Transit’s buses and trains and the Port Authority’s PATH trains.

“Manhattan may be an island, but on affairs of interstate commerce it is not an island unto itself,” Pascrell said in a statement aimed at the MTA.

The fight over congestion pricing isn’t the only dispute between the states. In mid-September MTA officials called New Jersey “illogical” in a fight over how to split billions in pandemic relief dollars meant for regional transit. The Murphy official said the administration isn’t playing 3D chess by tying that dispute with the congestion pricing concerns.

One congressional aide also said the gubernatorial election and other disputes aren’t the issue. Rather, the issue for New Jersey is that New York likes to forget that it relies on New Jersey commuters.

New Jersey’s chances of getting a piece of the New York pie seem slim, though. While the MTA has pretty broad authority in setting the tolls — as long as they raise $1 billion or so a year — New York law says where the toll money will go: 80 percent to city mass transit, 10 percent to Long Island Rail Road and 10 percent to Metro North, the train system that serves part of the Hudson Valley and Connecticut.

New Jersey politicians often portray their state’s commuters as uniquely captive to the whims of New York. But New Yorkers trying to leave their state are often captive to some unilateral tolls themselves — on the New Jersey Turnpike and Garden State Parkway.

“There is a whole interstate running down the center of New Jersey that if we have to drive south, that’s the only way to go,” said Danny Pearlstein, policy and communications director at the Riders Alliance, a group that advocates on behalf of New York subway and bus riders.

Some of the turnpike toll money goes to help fund public transit — in New Jersey. This spring, the New Jersey Turnpike Authority signed a deal that sends several billion dollars to NJ Transit in coming years. Likewise, the tolls to cross bridges and tunnels are set by the bi-state Port Authority.

“If there is a need for greater transit in New Jersey, then the New Jersey governor and legislature have all sorts of ways of raising that money,” Pearlstein said.

Indeed, Jeff Tittel, the retired director of the New Jersey Sierra Club and a Murphy critic, said the governor and other New Jersey politicians are making congestion pricing an issue to distract from already rising tolls and gas taxes in New Jersey. (This year, the gas tax dropped.)

“That’s what it really comes down to, that they are playing to the drivers who tend to be wealthy and suburban at the expense of mass transit,” Tittel said.

It remains unclear how many New Jersey drivers would be affected by the new tolls. MTA officials said an ongoing environment review is aimed at figuring that out.

Existing estimates vary a bit in what they say: An analysis by the pro-toll Tri-State Transportation Campaign found that “an average of 1.6% of workers will be subject to a congestion charge.” In one 2019 report, New York City’s planning department estimated 44,000 workers came to Manhattan by car from New Jersey. In another 2019 report, the New York Metropolitan Transportation Council estimated 111,000 people entered the central business district in cars, taxis, vans or trucks through New Jersey. All those numbers have likely been upended by the pandemic.

“While New Jersey drivers have always paid tolls to cross the Hudson River, many drivers from Westchester, Long Island and Connecticut have avoided paying tolls by crossing at free, city-owned crossings such as the Brooklyn Bridge,” Zoe Baldwin, the New Jersey director for the Regional Plan Association, told the MTA during a recent public hearing. “With appropriate toll credits in place at the three Hudson River crossings, this new policy will level the playing field.”

There seems to be agreement that it’s fair to deduct the cost of crossing through the Hudson tunnels, since the tunnels dump cars straight into the central business district already. But the toll commuters pay to cross the George Washington Bridge has been a lingering issue Murphy and others flagged back in 2019.

There is a delicate dance, though: the tolls have to be high enough to keep some people out of their cars. And each carve out for one group raises the toll for a group that doesn’t get a discount. That means New Jersey politicians are asking New York politicians for discounts that could raise tolls for New York drivers who can actually vote in New York elections.

For years, similar plans to decongest Manhattan have come and gone. “After more than 100 years and five generations of verbal, financial, technological and behavioral acrobatics in the name of the relief of congestion, New York City remains at a standstill,” federal environmental officials concluded in a report — written in 1979.

On Earth Day 2007, then-New York Mayor Michael Bloomberg floated new tolls as a way to clear up the air and combat climate change. In Albany, New York Republicans went along with the idea, but Democrat dissension killed it.

The idea was revived after a disastrous summer 2017 when there were subway delays, disruptions and derailments.

New Jersey’s opposition now seems to be firming up.

Simoncini, the head of the alliance, said the plan is to use the review being conducted by the U.S. Department of Transportation as a way to get New Jersey’s voice heard. He said New Jersey officials “recognize that without the federal department of transportation telling New York to cut it out, there isn’t any other fire break.”

Another New Jersey argument is that if New York’s main goal is reducing air quality, there are better ways of going about it, like focusing on diesel engine pollution. Monica Mazurek, an engineering professor at Rutgers University, argues that New York officials are using tolls to deal with a host of interrelated economic and environmental issues that tolls alone may not be suited to deal with.

“We have to be thinking more broadly than just raising tolls to meet some budgetary goals of MTA,” she said.