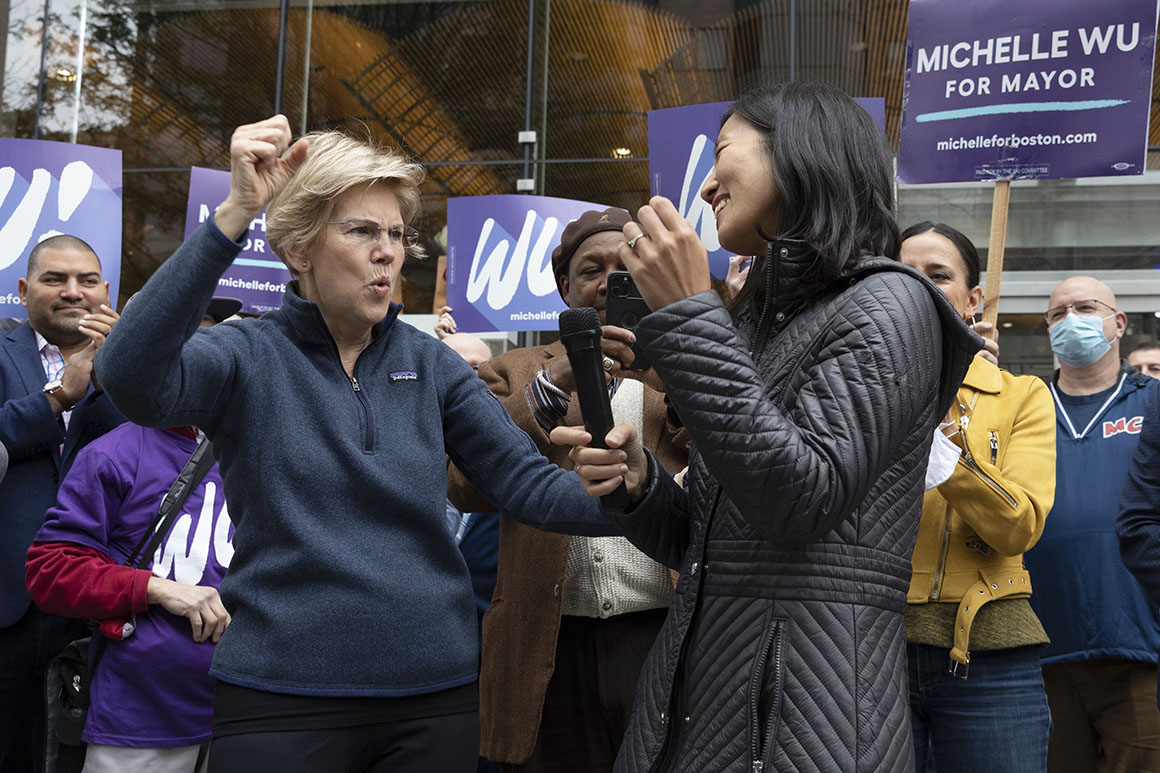 BUFFALO, N.Y. — Democratic socialist India Walton shocked her party’s establishment when she bested four-term incumbent Byron Brown in this city’s June mayoral primary. Now the insurgent left is fighting to hold on to their biggest victory this year — and get other mayoral hopefuls across the finish line in a series of progressive-versus-moderate clashes across the country.

Rep. Alexandria Ocasio-Cortez (D-N.Y.) and former Ohio congressional hopeful Nina Turner have stumped for Walton in recent weeks as she tries to fend off a comeback from Brown, a centrist who’s waging a write-in campaign to keep his seat. The Working Families Party, a left-leaning group with deep roots in New York City, poured nearly half a million dollars into Walton’s bid in October alone. Sen. Bernie Sanders (I-Vt.) sends out fundraising emails on her behalf. And Brown is courting Republicans as he tries to pull off the improbable.

“The progressive movement [is] right on the issues. Now we’ve got to get the power,” Turner, who co-chaired Sanders’ most recent presidential campaign, said while knocking on doors with Walton earlier this month. “Having somebody like India Walton become the next mayor of Buffalo, the second-largest city in the state of New York, is vitally important to this movement. It helps to catapult it to the next level.”

Now they’re looking to mayoral candidates across the country to help change the narrative emerging from these off-year races that the future of the Democratic Party is moderate. Buffalo and Boston — two Northeast cities that share deeply working-class roots — both offer a chance for the left to score more victories before the 2022 midterms. 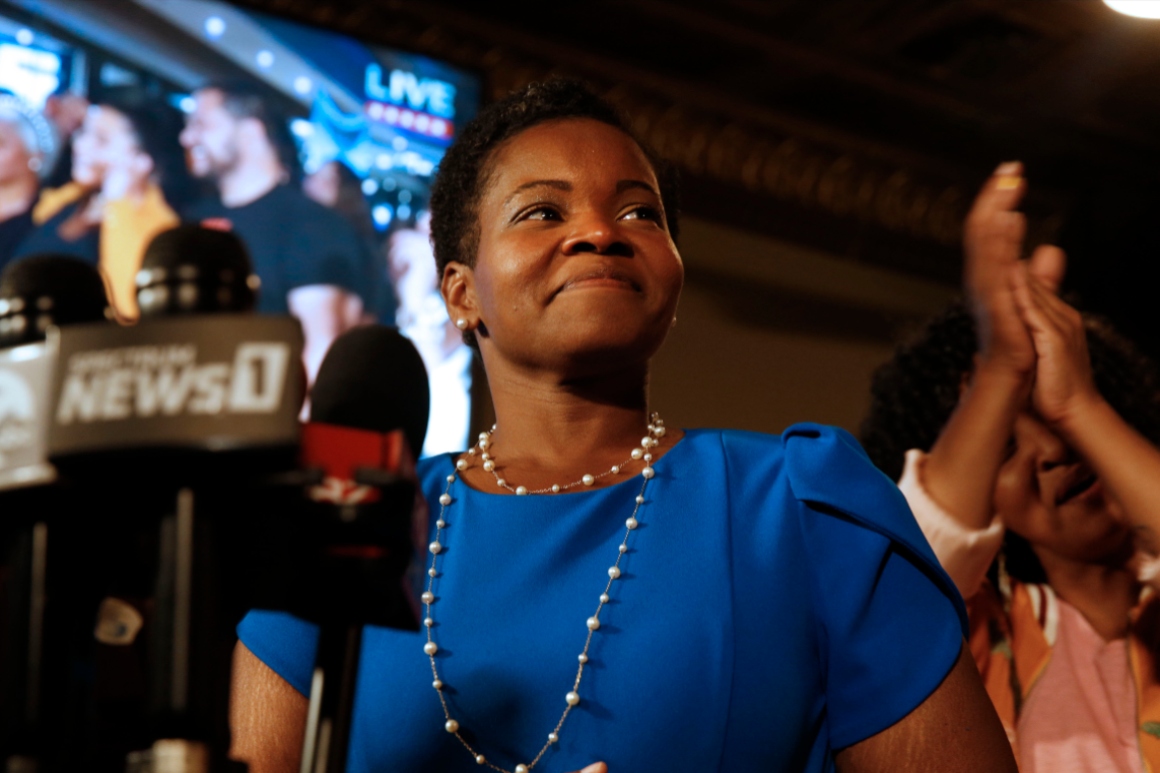 “We are seeing progressives positioned to win in major municipalities across the country,” Our Revolution political director Aaron Chappell said. “We’ve been doing a lot of building at the down-ballot, we’ve been winning races on city councils, school boards, things like that. But I do think this is the first time we’ve had this kind of momentum at the top of the ballot in so many places.”

Progressives have been making legislative inroads for years, winning seats on — and in some cases sweeping — city councils and growing their caucuses in House and Senate chambers from state capitals to Capitol Hill. But executive offices have remained largely elusive.

From Walton in Buffalo, to Michelle Wu in Boston, Justin Bibb in Cleveland and Aftab Pureval in Cincinnati, progressive pols and groups like Our Revolution and the Working Families Party see opportunities to break that mold.

Walton pulled off a primary upset by nearly five points in June. But the 38-year-old registered nurse and community organizer — who would be the first woman to lead Buffalo, and the first socialist elected mayor of a major U.S. city in two generations — is far from a shoo-in in what’s become a primary redux.

Brown’s write-in effort is well-funded, he won 47 percent support from Democrats in the June primary and is the clear pick for Republicans — who don’t have a member of their party on the ballot — in the general election.

But there’s also a chance that his support among Democrats has gone in the other direction as Walton gains name recognition and wins establishment support that was all but nonexistent before her primary victory. She’s been endorsed by Sen. Kirsten Gillibrand and Senate Majority Leader Chuck Schumer, both New York Democrats. Plus, Walton’s got the insurgent left at her back.

“I’m not exaggerating when I say the eyes of the nation will be on Buffalo soon,” Maurice Mitchell, the Working Family Party’s national director said at a rally in Buffalo earlier this month. “She is exactly the kind of candidate the Working Families Party was built to elect and represents exactly the kind of candidate that Republicans and corporate Democrats fear the most. You will send shockwaves through the political world on [general election] night, and those shockwaves will reverberate everywhere.”

Progressives have a clearer shot at the mayor’s office in Boston, though Wu’s not an insurgent — at least not anymore.

The four-term city councilor may have kicked off her mayoral bid last September as a left-wing challenge to then-Mayor Marty Walsh. But Wu, 36, quickly became the frontrunner in the nonpartisan preliminary election after Walsh left to become President Joe Biden’s labor secretary. She now leads her rival — City Councilor Annissa Essaibi George, a moderate in liberal Boston — by at least two dozen points in recent polls, putting the first Asian-American woman elected to the Boston City Council on track to become the first woman and first person of color to be elected mayor of the historically racist city.

Wu, a disciple of Sen. Elizabeth Warren (D-Mass.), won the support of her former Harvard Law School professor early on and has since racked up endorsements from Sen. Ed Markey (D-Mass.), Rep. Ayanna Pressley (D-Mass.) and a bevy of progressives and establishment Democrats from across state and local government. She’s also widely backed by progressive groups — including Working Families and Our Revolution, the progressive group that formed as an offshoot of Sanders’ 2016 presidential run— and climate-focused organizations that have celebrated her city Green New Deal and her calls for “bold solutions” to the city’s housing and transit woes.

“The progressive agenda is America’s agenda. The things we want to do are popular,” Warren said last weekend while campaigning with Wu in Boston. “People want to see us make the investments in transportation, in housing, in childcare and in really fighting back against climate change.”

Issues like affordable housing, policing reform and climate change are the ties binding progressive mayoral hopefuls from Boston to Seattle, whether they’re leading candidates like Wu or insurgents like community organizer Sheila Nezhad and former state Rep. Kate Knuth, who are both vying to unseat incumbent Mayor Jacob Frey in Minneapolis.

“The bigger the place, the more diverse the political opinion, and that helps moderates. The smaller the place, the more potential for a narrow political worldview, and that can help progressives,” New York-based Democratic operative Eric Phillips said. “A good progressive ground game in a city like Buffalo can win, whereas the progressive ground game in a city like New York isn’t yet strong enough to win a race of this size.”

And progressive organizing efforts vary from city to city. While Working Families is all in on Walton in Buffalo, pumping money into her campaign and sending press releases on her behalf, they only endorsed Wu in Boston last week. Our Revolution didn’t back Wu until this month, either, more than a full year into her campaign. Wu’s been the frontrunner for months by harnessing the citywide coalition she’s built over four at-large council runs, pointing to how some of progressives’ potential success this fall is less about a national movement than local issues.

“The fact that a progressive in the city of Boston easily won a primary with a lot of good candidates and looks like [she’s] going to cruise into an open seat in Boston says a lot about the strength of progressives generally,” veteran Democratic strategist Doug Rubin, who consulted for one of Wu’s rivals in the primary, said. “If you look at what’s going on nationally, the fact we’re having real conversations about these progressive issues like climate change and paid family leave to me suggest the overall arc of the Democratic Party is toward the progressive.”

Any mayoral victory in November opens the door for the next wave of progressive politicians as the movement works to build its bench. It also offers proving grounds for progressive policies that are “grounded in the day-to-day details of people’s lives,” Wu said.

Polls show Wu’s policies are already popular with Boston voters. Nearly 60 percent supported bringing back rent control, one of Wu’s signature policies, in a recent Suffolk University/Boston Globe/NBC10 poll, and 65 percent supported an entirely free public transit system, another one of her calls, in a MassINC Polling Group survey earlier this year.

“Voters believe that the kind of change Michelle Wu’s talking about is the kind of aggressive change they’re looking for because they’re tired of waiting, and I think that’s true across the country,” veteran Boston-based Democratic strategist Mary Anne Marsh, who’s unaffiliated in the city’s mayoral race, said.

While the issues dominating mayoral races are often far more immediate and granular than those debated ad nauseam in Washington, progressives who win next week can still help put the larger movement’s message to the test with the urban Democratic base ahead of next year’s midterms.

“Democrats should look at what’s bubbling up at the local level when they’re thinking about the midterms. And I think they’ll see after the Nov. 2 election that people do want progressive leadership,” Chappell, of Our Revolution, said. “A couple of congressional races that had tons and tons of money dumped into them are not necessarily the indicator of where people want to go.”

While moderates hold up Adams in New York as a bellwether for the direction of the Democratic Party, progressive organizers point to their movement’s successes in the city’s council races in that very same primary. And they cite St. Louis, where progressive-backed Tishaura Jones swept into the mayor’s office in April.

“The point here is that voters and the electorate are sending a message that we want policy and investments that go as bold and as deep as the hurt and the disparities are,” Pressley, who backed Jones for mayor and has been endorsing progressives in municipal races across Massachusetts, said in an interview after campaigning recently for Wu in Boston. “And that means that we can’t be incremental.”

Back in Buffalo, Walton said in an interview that she “didn’t anticipate” her race “would inspire nationwide hopefulness for [progressives winning] executive offices.”