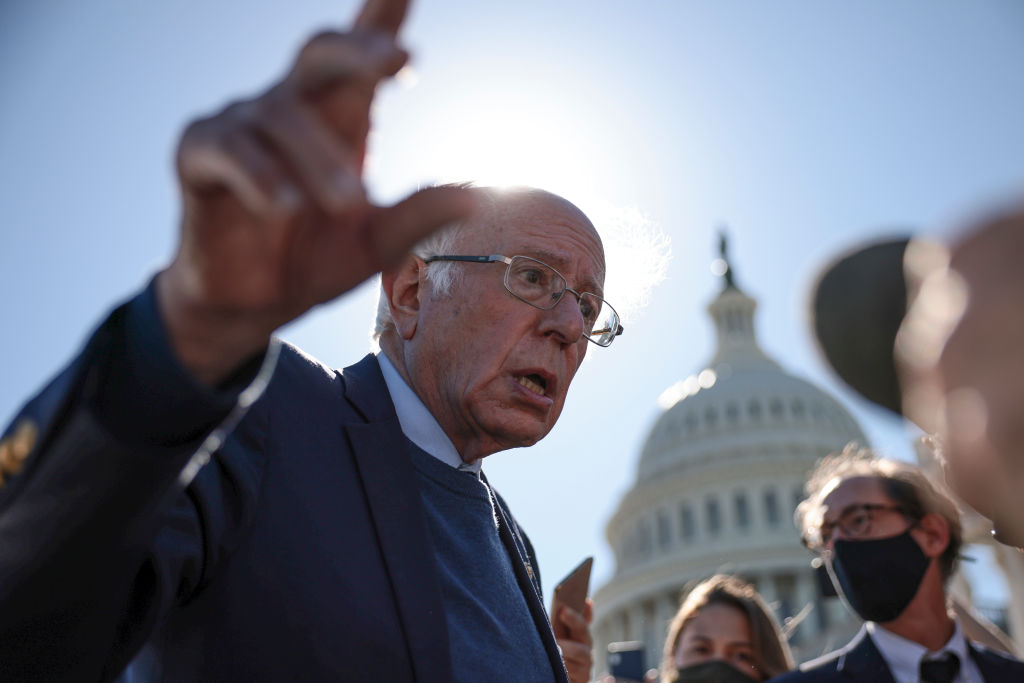 Joe Manchin and Bernie Sanders tangled in a private Democratic meeting this week that helped set the stage for growing progress on President Joe Biden’s agenda.

As Democratic leadership gathered Monday ahead of a pivotal week of negotiations on the party’s social spending bill, Manchin (D-W.Va.) laid out what he could accept to Senate Majority Leader Chuck Schumer’s team. Universal pre-K was in, he said, but no tuition-free community college.

Sanders (I-Vt.) was not pleased.

“Bullshit,” Sanders said, according to a readout of the meeting provided to POLITICO. Sanders said Manchin was telling the rest of the Democratic caucus to go “F themselves” and bend to one senator’s agenda. Manchin disputed that, recounting that he’d told Biden the president did not win West Virginia and his very presence in the Senate is remarkable.

Shortly after that tussle, Manchin and Sanders met privately, posed for a photo together and publicly reconciled. They’ve met four times so far this week, each softening their rhetoric toward one another and speaking more hopefully of a deal even as they continue to spar behind the scenes. Yet the cathartic blowup helped spark a significant breakthrough after a dayslong feud between the two that began when Sanders leaned publicly on Manchin to support Biden’s agenda.

Sanders, Schumer and Manchin’s offices declined to comment on a private meeting. But the Manchin-Sanders fence-mending, the increased specificity from Sen. Kyrsten Sinema (D-Ariz.) and progressives’ willingness to accept a social spending bill far short of the original $3.5 trillion target price all point toward a Democratic Party on the verge of a victory.

Sen. Sheldon Whitehouse (D-R.I.) said that within the caucus there’s “a recognition that we had better hang together, or else we shall all hang separately.”

There’s been a “powerful surge of interest across the caucus in getting this completed, and more interest in accomplishing that goal than quarreling over individual elements,” Whitehouse said.

If Democrats can cut a deal on Biden’s priorities, including final passage of the $550 billion infrastructure bill by the end of next week, it would be a huge relief — one the party hopes will help its gubernatorial candidate Terry McAuliffe in Virginia, boost Biden’s sagging poll numbers and end the infighting that’s consumed it for months.

But that might just take a little while longer: Manchin said he could not foresee an agreement by the end of the week. Still, when asked about how talks are going with Sanders, he replied: “Talks are always good with everybody.”

Inside the room on Monday when Sanders and Manchin tangled, though, things weren’t quite chummy. Manchin told the rest of the Democratic leadership team he’s getting hit every day back home, adding that the fact he’s agreed to do a social spending bill as pricey as $1.5 trillion is a big deal. Schumer mediated the dispute, defending Manchin and declaring that “you’re not a Republican” because Manchin, like the rest of the caucus, opposed the 2017 GOP tax cuts geared toward the wealthy.

The bad blood between Sanders and Manchin had risen for more than a week, eventually culminating in Sanders publishing an op-ed in a West Virginia paper and Manchin firing back that Sanders is an “out-of-stater” telling West Virginians what to do. Those cross words have dissipated, relatively, as party leaders set a new goal of crafting a deal by the end of the month. As he left the Capitol, Sanders agreed with Manchin that a deal is unlikely this week.

Despite that caution, Democrats have definitively grown more optimistic in recent days and began to project that a deal is in sight on the social spending package. While Sinema remains more of a wild card, several Democratic senators this week suggested they were making progress with Manchin.

“You saw publicly the sort of blowup and somewhat reconciliation of Sens. Manchin and Sanders,” observed Sen. Chris Coons (D-Del.), indicating that the tension between his two colleagues isn’t fully resolved. But he said most of the caucus is feeling pressure to finish its work: “We’ve been circling this airfield for weeks, it’s time to land the plane.”

The debate between Manchin and Sanders over the size and scope of the package has gone on for months and continued even after Monday’s scuffle. During a Wednesday caucus meeting, Sanders and Manchin engaged in another back-and-forth over the bill.

“On both Tuesday, in the caucus lunch, as well as Wednesday in the [chairmans’] lunch, there was really significant engagement, especially with Joe, with Joe and Bernie,” said one Democratic senator, addressing internal dynamics on condition of anonymity. This senator added that Sanders and Manchin were “not arguing — just making their points.”

Sanders and Manchin are emblematic of their party’s two wings. While some senators have privately voiced frustration with Manchin over his lack of specificity on his goals for the social spending bill, in recent weeks he has grown more precise about his needs. There’s a widespread view within the caucus that Manchin has a track record of eventually getting on board with his party’s priorities.

Sinema has been more elusive, declining to support Democrats’ tax and pharmaceutical reform plans while saying she’s briefed Schumer and Biden extensively — though she signed off on some tax proposals Thursday afternoon that is another sign of a big breakthrough may be in the works.

“I am surprised that there’s anybody in the United States Senate not prepared to do what the American people want. And that is: Demand that the wealthiest people in the country pay their fair share,” Sanders told reporters on Thursday afternoon.

“Do what the American people want and they want us now to lower the outrageous cost of prescription drugs … I would hope Sen. Sinema does what the people of Arizona want,” Sanders added.