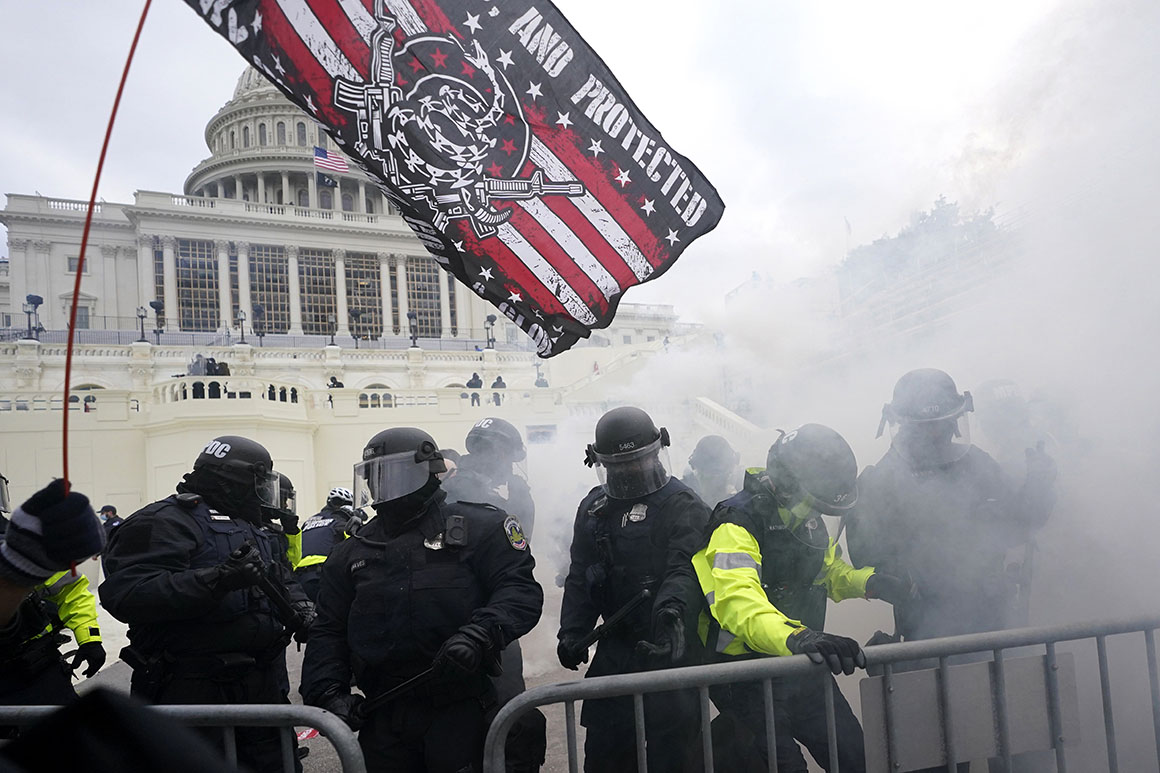 A former high-ranking Capitol Police official with knowledge of the department’s response to the Jan. 6 attack has sent congressional leaders a scathing letter accusing two of its senior leaders of mishandling evidence and failing to respond properly during the riot.

The whistleblower, who requested anonymity for privacy reasons and left the force months after the attack, sent the 16-page letter late last month to the top members of both parties in the House and Senate. His missive makes scorching allegations against Sean Gallagher, the Capitol Police’s acting chief of uniformed operations, and Yogananda Pittman, its assistant chief of police for protective and intelligence operations — who also served as its former acting chief.

The whistleblower accuses Gallagher and Pittman of deliberately choosing not to help officers under attack on Jan. 6 and alleges that Pittman lied to Congress about an intelligence report Capitol Police received before that day’s riot. After a lengthy career in the department, the whistleblower was a senior official on duty on Jan. 6.

The whistleblower’s criticism went beyond Capitol Police leaders to Congress. Without naming specific lawmakers, his letter accuses congressional leaders of having “purposefully failed” to tell the truth about the department’s failures.

POLITICO obtained the letter detailing the allegations, which is circulating among Capitol Police officers, and is publishing portions of it here. To protect the whistleblower’s identity, POLITICO is not publishing the letter in full.

“The truth may be valued less than politics by many members of the congressional community to include those that have made decisions about the leadership of the USCP post January 6th, but I believe the truth still matters to real people and certainly the men and women of the U.S. Capitol Police,” the whistleblower wrote.

A spokesperson for the Capitol Police sent a statement in response to the letter that begins: “A lot has changed since January 6. Although there is more work to do, many of the problems described in the letter have been addressed.”

The spokesperson added that the department “has implemented, and continues to implement, many of the critical recommendations called for in” a Senate inquiry into Jan. 6, a separate review conducted by retired Lt. Gen. Russel Honoré, and multiple probes by its own inspector general.

“The letter from the former employee echoes the thoughtful recommendations in those reports,” the Capitol Police spokesperson continued. “USCP leaders, under new Chief Tom Manger, are committed to learning from prior mistakes and protecting our brave officers, who fought valiantly on January 6, so we can continue to carry out the Department’s critical mission. The men and women of this Department are committed to that critical mission. Our goal is to work as a team, to move forward, and advance the work that keeps the U.S. Capitol and the people who work here safe.”

The whistleblower accused Pittman of lying to Congress about a key intelligence report the department received in late December. That report noted that a blog called “thedonald.win” posted a map of the Capitol campus, and that commenters on the site called for protesters to carry guns and confront members of Congress on Jan. 6.

Pittman told congressional investigators in April that a cohort of senior officials in the department were also aware of that intelligence before the attack. The whistleblower claimed in his letter, however, that other officials did not receive the intelligence report, and that Pittman lied when she said they did.

“These officials were the only officials that had all the intelligence information for the 6th,” the whistleblower wrote, regarding Gallagher and Pittman.

“The single most important piece of intelligence information … was never shared with any members of USCP leadership,” the whistleblower added, asking: “Why did they approve the operational plan for the 6th if they knew the intelligence?”

A senior law enforcement official said that other people in the department actually did have the intelligence, but that it clearly should have been distributed more widely. The Capitol Police spokesperson disputed the allegation that Pittman lied to Congress and noted that the department has changed its internal and external intelligence-sharing practices because of the attack.

However, the report in question wasn’t the only key piece of intelligence that didn’t reach the right people in the department, according to the whistleblower. Gallagher and Pittman also had information showing groups that received permits to hold events surrounding the Capitol on Jan. 6 were all front operations for Stop the Steal, the whistleblower wrote. 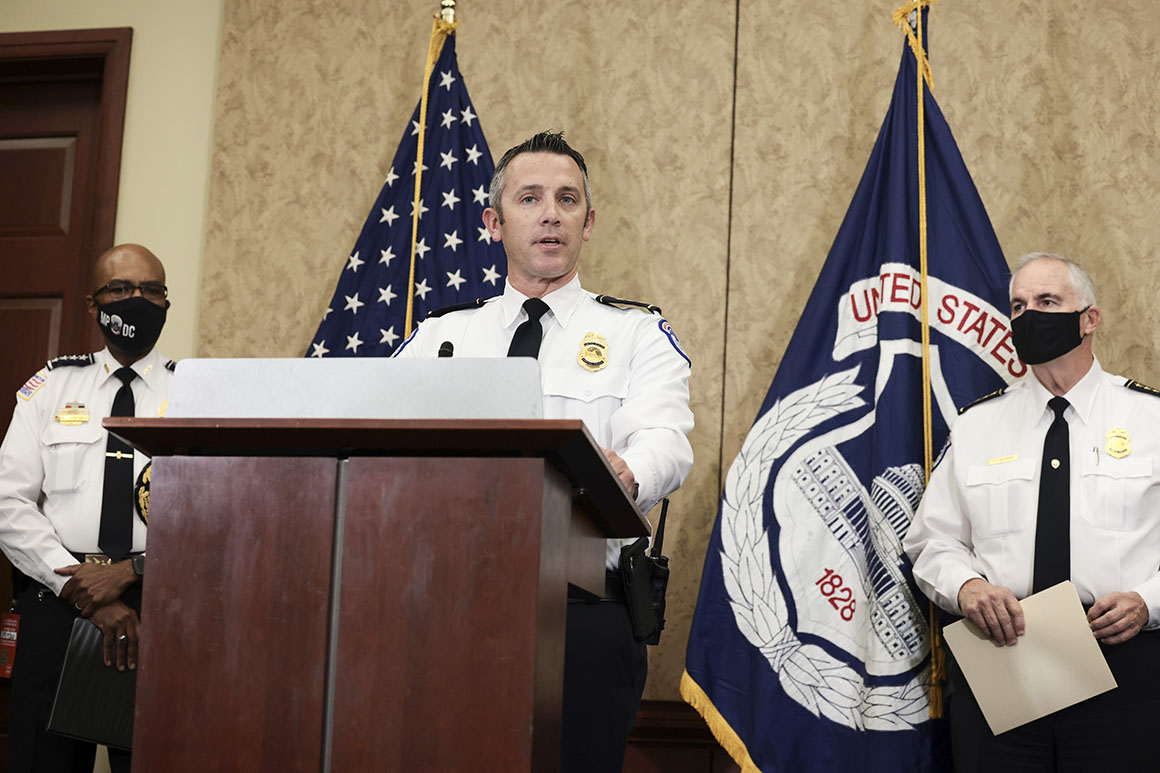 Stop the Steal was a movement promoting the conspiracy theory that nefarious forces stole the election from Trump. The movement’s organizers promoted a rally on the National Mall that preceded the attack on the Capitol.

That was “game changing information,” the whistleblower added, but operational commanders — meaning, the law enforcement officers in the field supervising police activity — never learned about it.

In the whistleblower’s view, Gallagher and Pittman had all the intelligence needed to justify demanding reinforcements from the National Guard, closing the doors to the Capitol and using tougher but less-than-lethal weapons on the morning of Jan. 6. But they didn’t share that intelligence with the right people, the whistleblower wrote, and instead approved a woefully inadequate security plan.

“What I observed was them mostly sitting there, blankly looking at the TV screens showing real time footage of officers and officials fighting for the Congress and their lives,” the whistleblower wrote.

“It is my allegation that these two with intent and malice opted to not try and assist the officers and officials, blame others for the failures, and chose to try and use this event for their own personal promotions,” he added. “This was done not after the even[t] but while officers and officials were still fighting the demonstrators.”

They watched “mostly with their hands in their laps,” he added, and “did not try to help or assist as officers and officials were literally fighting for each other, their lives and the Congress.”

The two law enforcement official who confirmed Pittman and Gallagher’s presence in the command center disputed the claim that they passively watched the attacks. Those officials said Gallagher focused on bringing in support from the National Guard and law enforcement partners, and that Pittman focused on the evacuation and protection of members of Congress and the vice president.

The whistleblower, however, wrote that officials and officers have resigned from the department en masse because Pittman and Gallagher haven’t been held accountable for what happened that day.

“This concerted effort to protect the two members of the Department without question the most responsible for the tragic events of January 6th is repulsive,” the whistleblower wrote.

And the whistleblower lambasted congressional leadership for letting Gallagher and Pittman maintain their senior roles in the police department even as a new chief took over at the Capitol Police.

“[I]t is immensely embarrassing to the congressional leadership and staff that they selected the two individuals most responsible for the 6th to lead the Department after the 6th,” he wrote in his conclusion. “Especially since some entity selected them without any investigation. To hold them accountable would require this same group to admit they were wrong.”