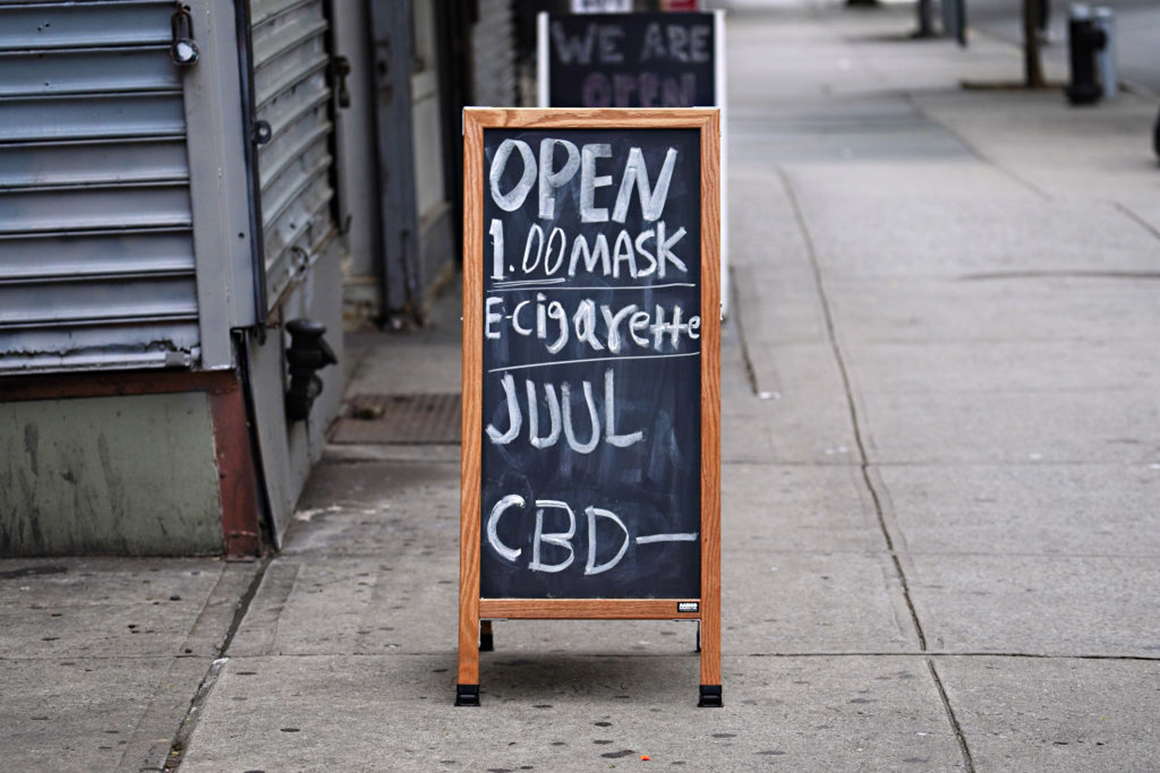 The Food and Drug Administration’s decision this week to authorize the sale of an electronic cigarette was a landmark for the vaping industry — but it may only deepen confusion about the sector’s future.

More than a month after a court-ordered deadline to determine which e-cigs could stay on the market, FDA has yet to act on applications from some of the industry’s biggest players, including Juul.

And while the agency has denied or rejected as incomplete millions of marketing applications from small and mid-sized manufacturers, it has not said whether any type of vape flavors are acceptable. In the meantime, FDA has already rescinded its denial to one mid-sized manufacturer, after conceding that it overlooked crucial data. That could convince more firms to appeal the agency’s vaping verdicts.

E-cig manufacturers and anti-vaping groups alike are puzzled by the agency’s course so far. The industry is looking for a clear path forward, while public health groups argue that FDA’s actions haven’t helped reduce vaping’s appeal to teens. The agency has said only that it will review remaining vape marketing applications “expeditiously.” And it faces potential wildcards from legal challenges brought by pro- and anti-youth vaping camps.

“I think you’re seeing the challenge of trying to apply new regulation to an existing industry,” said Scott Gottlieb, a former FDA commissioner who spent a large portion of his tenure focused on tobacco regulation. “We’re going to get to the proper end result… This is just a challenge.”

An agency spokesperson said FDA has ruled on “over 98 percent” of all of the new tobacco product applications it received by the Sept. 9 deadline.

“FDA is committed to completing the review of the remaining applications as quickly as possible to provide regulatory certainty and will continue to keep the public informed of our progress,” the spokesperson said. “FDA is conducting review of many different applications concurrently and intends to continue issuing marketing decisions as review for the applications is completed.”

FDA’s regulation of the e-cigarette market is a long time coming. The agency finalized a rule in 2016 requiring manufacturers of tobacco products to submit premarket tobacco applications, or PMTAs, for any product introduced after February 2007. In many cases, that meant companies needed to seek permission to keep selling their existing products.

A judge later ordered companies to apply by September 2020 and FDA to issue decisions by September 2021, after anti-tobacco groups sued to speed up the regulatory process. But the agency finalized the PMTA rules for e-cigarettes this month, weeks after its mandated deadline to rule on companies’ filings.

The new rules take effect in early November. They require companies to prove that the likely benefits of their products to adult smokers outweigh the risk of enticing teens, children or other nonsmokers to begin vaping. That is similar to the standard FDA had previously laid out. When it announced the final rule, FDA said that all pending applications wouldn’t be held to new standards.

To date, the agency has only authorized one vape and two tobacco-flavored cartridges made by Vuse, a brand owned by cigarette company R.J. Reynolds. After FDA announced the decision on Tuesday, some public health experts questioned whether the items met the agency’s criteria for authorization — particularly because they contain levels of nicotine on par with some Juul and disposable e-cigarette products, both of which have been historically popular with teenagers.

“It’s deeply concerning that FDA seems little concerned about the abuse potential [of these products]” said Matthew Myers, the president of the Campaign for Tobacco-Free Kids, which sued FDA in 2018 over the agency’s failure to require e-cigarette manufacturers to submit PMTAs in a timely manner.

“The only way Vuse [products] could be used to reduce health harms relating to tobacco are if smokers switch entirely or near-completely from smoking to using the Vuse e-cigarette instead,” Eric Lindblom, a former official at FDA’s Center for Tobacco Products who is now a senior scholar at the Georgetown University Law Center, wrote in an email to POLITICO. “Any other use will increase the health harms and risks to the users.”

“It’s all up in the air,” said Gregory Conley, the president of the American Vaping Association. “FDA has not issued any new [marketing denial orders] since Sept. 23, after a month of just non-stop shuttering tobacco-derived nicotine e-cigarette businesses in America. And then it all stopped.”

The agency last week reversed a denial it had issued to Turning Point Brands, the first company to appeal a vaping decision, regarding hundreds of its e-cigarette products. FDA said it had uncovered “relevant information that was not adequately assessed” in the company’s application — including randomized, controlled trials comparing tobacco-flavored vapes to fruit-flavored ones, and studies assessing how smokers, vapers and nonsmokers perceived or used its products.

These additional data merited FDA’s further review, the agency said, leading it to put hundreds of Turning Point Brands’ vapes back in the review process. The agency won’t punish the company for continuing to sell the products without marketing orders while it re-reviews them.

“It sounds like they didn’t review certain parts of the application,” said the former CTP official. “When I was at FDA … we had to do full reviews of everything and provide responses to everything the company had submitted. Even if there was a fatal flaw, we still had to review the entire application — which honestly felt like a waste of resources.”

The reviews then, for cigarette products, took multiple years and included several rounds of back-and-forth with the cigarette manufacturer, the official said.

“It looks like FDA isn’t doing that anymore,” the official added. “It looks like they’re giving companies one bite at the apple and then making a decision.” The official suggested this is the result of the agency’s one-year deadline to provide decisions on all the applications.

Companies are also unsure of whether their mentholated products will remain on the market. The Biden administration has said that FDA will propose a policy next year to ban menthol-flavored cigarettes.

In the meantime, the agency has told e-cigarette manufacturers that their menthol products will receive “unique considerations,” meaning it’s taking longer to review. Public health groups have an open case against FDA in northern California over its failure to regulate menthol cigarettes.

“More than half of our members have had their applications for menthols and tobaccos denied by FDA,” said Amanda Wheeler, the president of the American Vapor Manufacturers Association. “The most generous interpretation is that FDA has made a sweeping clerical error in denying these products.”

Public health experts speculate that the agency wants to prevent vape users who prefer menthol from switching to cigarettes if menthol vapes are taken off shelves.

FDA “is saying, ‘Do we need menthol e-cigs on the market when we ban menthol cigarettes so menthol smokers don’t go to non-menthol cigarettes?’ I think that’s the big question FDA is sitting on,” Lindblom said.

Regardless of the reason for FDA’s denials of vapes, menthol or otherwise, outsiders fear that more companies will continue to appeal FDA’s marketing denial orders to keep selling their products.

“If their product is allowed to stay on the market, they want to drag this thing out as long as possible,” the former senior official said.

That notion angers anti-youth vaping advocates. “If these lawsuits delay implementation of FDA’s orders, it will be the quintessential example of how business has undermined and distorted the regulations designed to protect the American public,” said Myers.

He acknowledged that the agency is in a tough spot, however. “I don’t think it’s as chaotic as it appears,” Myers said. “The reality is that the vast majority of products that have been denied were flavored products that appealed to kids for which no credible science was provided.”

And it makes sense that the agency is taking longer to review applications from larger companies, which likely have meatier applications, Myers added — especially in the face of appeals and lawsuits from other firms. But he is still frustrated that the pace of FDA’s decisions on major companies’ applications and menthol vapes is unclear and behind schedule.

Gottlieb, who has long advocated for public health restrictions on tobacco products, said that’s due in part to the difficulty FDA faces in reining in a thriving vaping industry.

“CTP has been doing a very good job, methodically walking through the various steps they need to play tape to get that proper regulatory framework in place, and that’s what you see play out,” he said. “I’m sure there’s a lot of people who would like to see things move more quickly.”