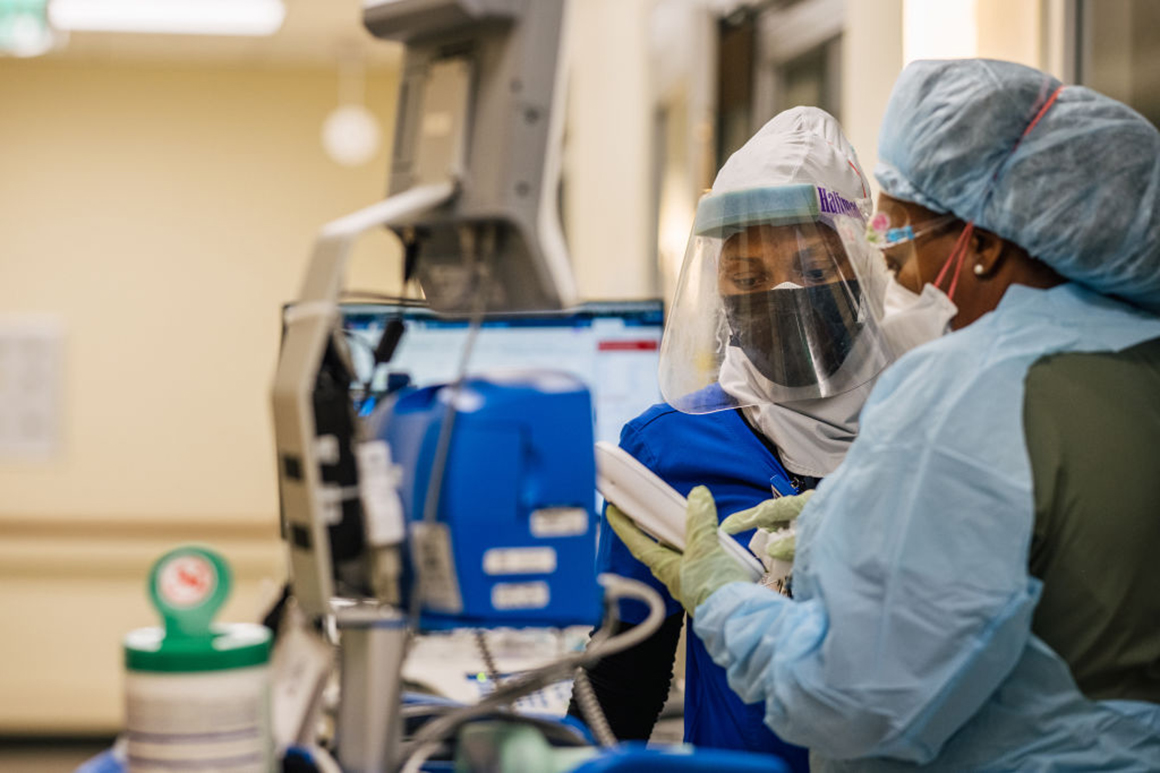 States such as Alabama and Louisiana still are struggling with unsustainable Covid-19 caseloads and hospitalizations that are stretching their funding, supplies and medical staffing, according to interviews with 10 state public health officials. They said the federal resources that did materialize could not ward off surges or allow them to successfully manage overcrowded intensive care units because Delta spread at unprecedented rates in areas with low vaccination rates.

The federal officials Biden promised arrived only after Delta had already begun to take hold. And state officials said the personnel sent to help track and prevent the spread of the variant, including experts from the Centers for Disease Control and Prevention, couldn’t fix the systemic problems public health departments faced in investigating outbreaks.

The federal deployments also were limited to a handful of states in the Midwest and South experiencing the most severe outbreaks — while other states’ requests for personnel were rejected. That forced officials to work with outside contractors to quickly hire more doctors and nurses at local hospitals. By August, the federal government had dispatched 485 personnel to seven states, mostly to help at hospitals, with more than half sent to Louisiana where the Delta variant hit the hardest, according to federal data shared with POLITICO at the time. States that didn’t get staffing help received supplemental funding but couldn’t find enough doctors and health workers fill gaps at hospitals.

The patchwork response underscores how the most stricken states wound up pitted against each other for medical personnel and other federal resources as they struggled to treat and save the lives of thousands of Covid-19 patients. It also raises questions about how federal officials will triage trouble spots during future surges if the nationwide medical staffing shortage persists.

“When we asked for 1,200 federal medical personnel, we were hoping we would get all 1,200,” said Umair Shah, the secretary of health at the Washington State Department of Health. “When you have Hurricane Ida and then you have 50 states that are all having surge and you’re doing that in the midst of having health care shortages throughout the country, then it really becomes hard to get resources into your state, because you’re in essence competing with all the other states that are in all the other demands that are out there.”

State officials stressed that although they struggled to respond to the wave of infections even with the federal help, their efforts would have suffered more without it.

The administration to date has sent 1,500 federal personnel to respond to the Delta surge, including physicians, nurses, paramedics, EMTs and public health experts, according to the White House. As of last week, 917 are on the ground — the majority are clinical personnel supporting patient care.

“The work these teams have done and continue to do are a testament to the president’s wartime, whole of government Covid-19 response and indubitably have helped to save lives and accelerate the nation’s recovery efforts,” a White House spokesperson told POLITICO.

When Biden promised help in July, his administration was struggling to get large portions of the country vaccinated — particularly in the South and Southwest — and the Delta variant was quickly becoming the most dominant strain in the U.S. States with persistently low vaccination rates such as Louisiana, Mississippi, Missouri and Texas experienced massive increases in cases. 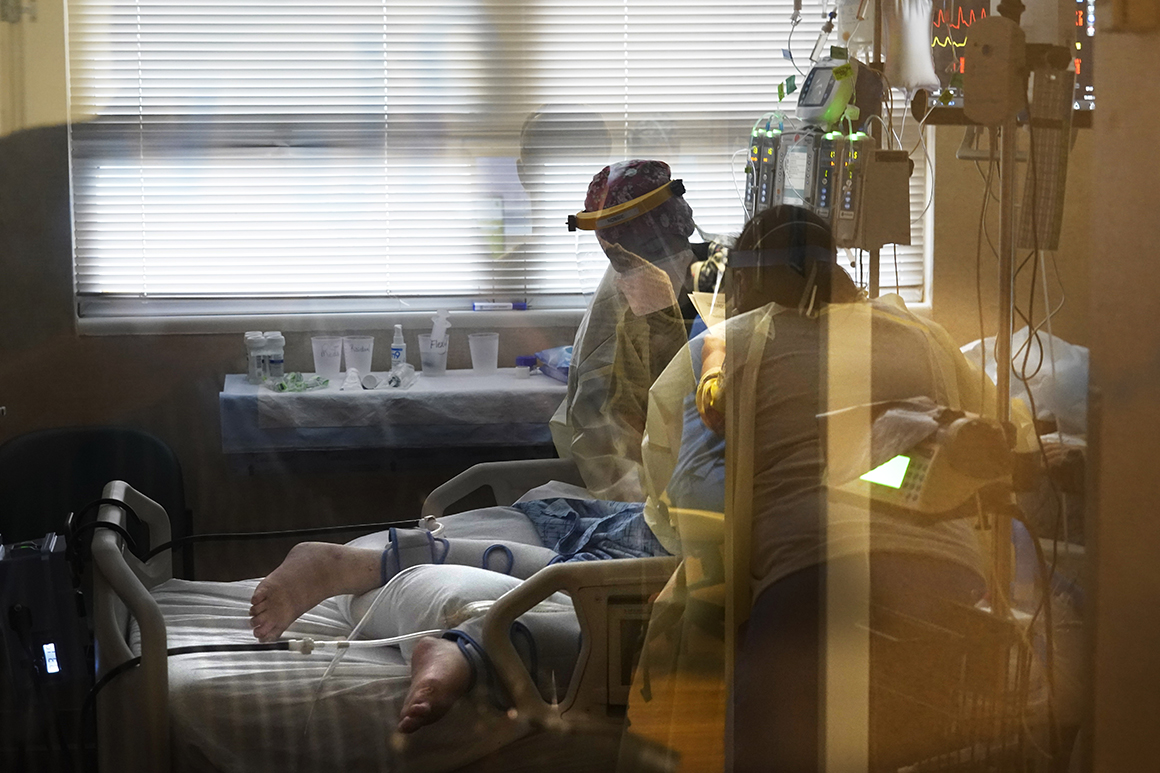 The rise in cases over the summer also came at a time when the federal government was responding to multiple disasters, including wildfires in the West and hurricanes and tropical storms in the South.

The federal government tried to patch holes where it could, sending employees from the CDC and the Department of Health and Human Services to help ramp up vaccinations and FEMA medical personnel to backstop certain hospitals in states like Louisiana. But with requests coming from dozens of states, the administration couldn’t accommodate every one.

Officials decided to distribute tens of millions of dollars to states for Covid-19 testing and to address other priorities. They also pledged to reimburse states for the upfront cost of hiring more doctors and nurses.

“I do think there’s a variable here where poor states, like New Mexico, might have really fantastic experiences and wealthier states might not,” said David Scrase, the secretary of the New Mexico Department of Health. “For a poor state, like New Mexico, generally, we get two federal dollars for every one dollar we send to the federal government. The federal response reimbursements have been a lifesaver.”

Still, the response couldn’t fill the most desperate needs in communities where the virus had taken hold.

“The majority of hospitals had to postpone or cancel non-emergency procedures,” Louisiana’s Kanter said. “Many ambulatory clinics had to shut down and have those staff be redirected to inpatient care. Those are the things that may be fine for a day or two, but when they last for a month, there are real consequences to that.”

For example, the administration assigned a two-person team to help Missouri. One CDC epidemiologist helped with genetic sequencing, data analysis, and epidemiology support to examine outbreaks. Another CDC employee provided remote support as a risk communication specialist to help with a surge in cases related to local vaccine hesitancy. Four other agency personnel were dispatched to Illinois and Arkansas to support outbreak investigations.

The first FEMA team in a force that eventually numbered 200 traveled to Nevada in mid-July, embedding with the state public health department and the National Guard to help get more people vaccinated.

By that point, state health officials said it had become clear that they would not be able to vaccinate enough people to keep Delta at bay. And the issues they were experiencing with tracking and investigating Covid-19 cases would take years to fix.

What states needed more than anything was more medical personnel to take care of sick patients. But there weren’t enough available.

By the end of July, the Delta surge had become untenable for physicians and medical staff in Louisiana. Hospital beds, including in ICUs, were full and emergency waiting rooms were packed with people waiting to be seen. Similar scenes played out in Alabama, where rural medical facilities were struggling to make space and find nearby regional hospitals that could accept new Covid patients.

The issue wasn’t about available space. Hospitals lacked personnel to staff the beds and take care of the patients, multiple state health officials said. Since the beginning of the pandemic, medical facilities across the country have struggled to maintain staff levels needed to fight Covid-19 surges. Nurses, in particular, have left their posts to take new traveling jobs that pay more money. Others have left the profession or taken leave of absences to recover from the workload of the pandemic.

“The clinical workforce was hurting, before the surge, so we were disadvantaged going into the surge,” Kanter said.”Our hospitals simply could not sustain themselves. They were stretched, literally, to the absolute limit.”

The federal government sent almost 100 individuals to Mississippi to help with hospital staffing and Covid-19 treatment, more than 200 to Louisiana, 21 to Arizona and 17 to Alabama. The administration also deployed 24 paramedics in Oregon, seven individuals to help nursing homes in Wisconsin and 60 emergency medicine technicians in Missouri.

Other states that battled large surges relied instead on promises of money to reimburse costs of expanding hospital staffing. Some states tapped government contractors to help recruit and hire nurses.

FEMA and HHS have helped send medical and testing supplies as well as treatments like monoclonal antibody treatments from the strategic national stockpile and through other supply chains. Since the beginning of August, the federal government has fulfilled requests for equipment from at least 15 states, shipping more than 3,000 supplies, including ventilators, ambulances, dialysis machines, mobile vaccination sites and mortuary trucks.

A senior administration official told POLITICO that HHS public health and medical personnel are currently supporting efforts on the ground in Arizona, Oklahoma, Kentucky, Wyoming and Tennessee. But it is unclear how many individuals have been sent to those states and whether they are specifically helping with hospital staffing.

A recent burst of cases in Alaska — the highest spike in the U.S. since the pandemic began — led HHS to send a team from the National Disaster Medical System to Alaska Native Medical Center in Anchorage for surge support. Seven personnel from the U.S. Public Health Service Commissioned Corps also deployed to Anchorage.

States including New Mexico and Alabama are still building up their hospital medical personnel three months after Biden announced help was on the way.

“I am concerned that we’re not finished here. I’d like to think that I am looking in the rearview mirror, but I’m not sure that I am yet,” said Karen Landers, an adviser to Alabama’s health department. “I hope I am. But we still have got several months of weather to go here and we’re heading into the fall and winter where it is colder.”