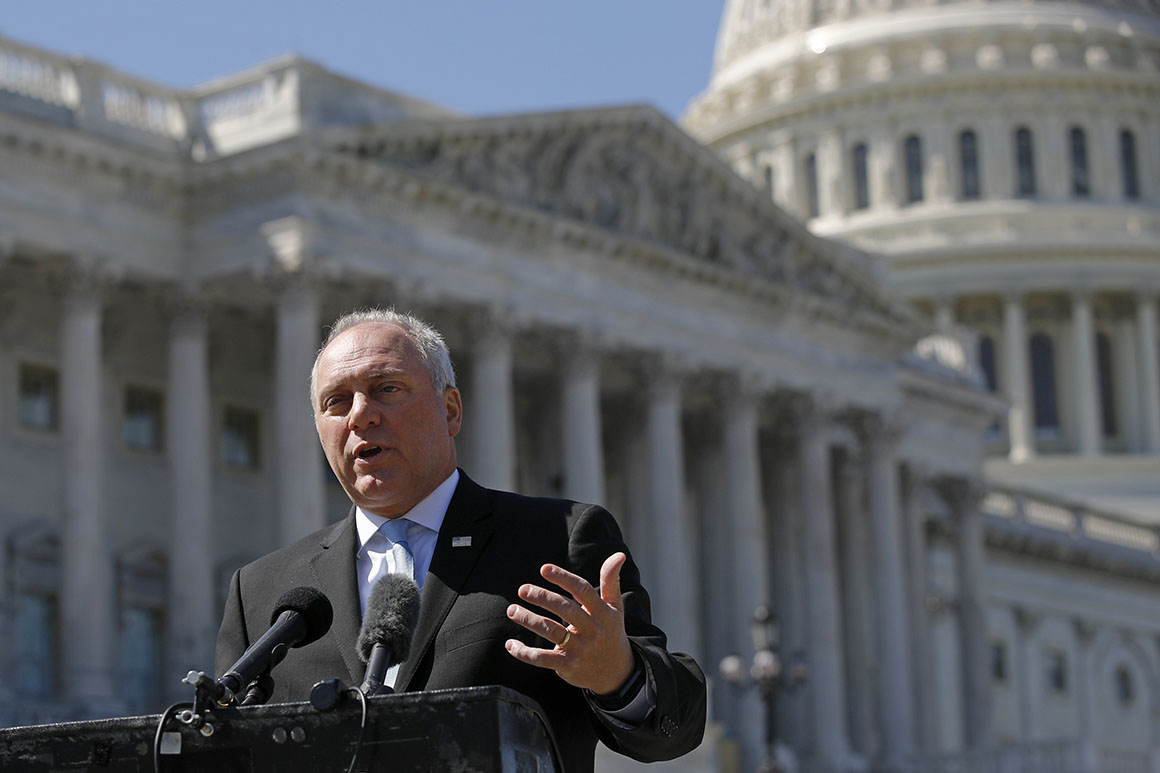 Democratic leaders’ ambitious domestic agenda is trapped in a political tug of war: The more they yank toward progressives, the more they pull away from centrist GOP forces that rallied behind their infrastructure bill.

That infrastructure plan passed the Senate less than two months ago with 19 GOP votes. But top Democrats’ insistence on linking it to a bigger, party-line social spending measure has squeezed House Republican centrists who’d hoped to deliver dozens of votes for the roads and rails bill from their side of the aisle.

There aren’t many of those GOP centrists, but their support could further burnish the infrastructure bill’s bipartisan credentials. With Speaker Nancy Pelosi and President Joe Biden tying infrastructure to massive spending on progressive priorities, however, Republicans who’d wished for a standalone vote are now forced into an intricate dance — ignoring the linkage and backing an infrastructure bill that doesn’t stand on its own.

Those machinations involve more than just GOP lawmakers. The U.S. Chamber of Commerce, once an establishment Republican bulwark, has denied reports that it’s yanked support from the infrastructure plan while insisting that it only supports the measure decoupled from the Democrats’ social spending mega-bill.

And the party’s biggest winner in the entire affair is House GOP leaders, who say Democrats are only helping their efforts to unite their conference against the infrastructure measure by repeatedly linking the two together. Republicans are using the connection as a messaging cudgel to beat down backing for the infrastructure bill.

“Frankly, we used a lot of Democratic leadership’s words … There were statements from Pelosi to Schumer to Bernie Sanders, all the way up to President Biden, that made clear that all bills were tied together as one,” House Minority Whip Steve Scalise (R-La.) said in an interview, calling last week’s series of delays “round one.”

House Republicans project that their aggressive whip operation and Democrats’ multiple delays of the infrastructure vote have shaved off dozens of Republican votes that would have materialized for a standalone bill to fund roads, bridges and broadband. Some GOP lawmakers estimated that roughly 50 or more Republicans would’ve rallied behind the Senate-passed infrastructure bill in August.

Now the infrastructure vote’s whip count ranges only as high as 15 House Republicans, with GOP sources noting that a few more could also trickle in if the bill appears it is going to pass.

“You probably would have gotten a bunch before the leadership started to whip against it, and now you’re probably going to lose more because Biden has so actively linked them,” said one centrist House Republican. “I think it really depends. If they have the [infrastructure and social spending] votes held at the same time, I’d be surprised if we got one Republican to support it.”

Time and internal pressure have made their mark, especially on Republicans who were initially uneasy about supporting an infrastructure plan that would deliver a legislative win to the Biden administration. Some in the House GOP also pointed to anger surging within their party’s base toward Senate Republicans who supported the legislation.

Pelosi’s delays, after telling moderate Democrats she’d hold an infrastructure vote on Sept. 27, also played a major role. The speaker knocked that deadline back to Oct. 1, then later shifted the goal to Oct. 31 as progressives threatened to withhold their votes for the infrastructure bill if a reconciliation package wasn’t married to it.

“Every morning you’d wake up and there’d be a news story about just how linked the two bills are,” said a senior GOP leadership aide who addressed the whip operation candidly on condition of anonymity. “That’s not to say that there weren’t a lot of people out there, whether it was folks in the [K Street] community and elsewhere, that didn’t necessarily agree with us the whole way. Now, I think everyone has to see that there’s absolutely no doubt.”

“If it doesn’t come up today,” Malliotakis said of the infrastructure bill on Thursday, “it will very well be tied to a much larger $3.5 trillion socialist wish list — which I don’t think gets any Republicans.” Malliotakis added that, had the Senate-passed bill gotten a standalone vote, she would consider supporting it.

Instead, Republicans scratched their heads as Biden arrived at the Capitol last week to help shepherd support for his infrastructure agenda, only to let the vote get punted for weeks.

“It was a major failure for the president to show up on a day that they were promising a vote on a major bill and to not deliver that vote,” Scalise said.

House Minority Leader Kevin McCarthy and Scalise have individually called certain members to try to influence their vote, arguing that the two pieces of legislation are inextricably tied.

Republicans talked about “how these two are combined, and that if you’re voting for one, you are voting for both,” said Ohio Rep. Brad Wenstrup, a deputy GOP whip.

When Republicans met last Tuesday for a conference meeting, some centrists left the room airing private frustration over how fiercely GOP leadership went after the infrastructure bill. One GOP member in attendance characterized it as “aggressive.”

The vote has also pitted some House Republicans against each other, with firebrand Rep. Marjorie Taylor Greene (R-Ga.) vowing to financially help primary challengers to colleagues who support the bipartisan infrastructure bill.

And off the Hill, other figures have used their platforms to attack potential Republican backers of the bill. Former Trump adviser Steve Bannon, for one, railed against a loose list of possible GOP yes votes on his radio show, leading listeners to bombard those offices with phone calls. (Some Republicans who were named, like North Dakota Rep. Kelly Armstrong, got swept up in the Bannon-induced wrath despite being open about their opposition to the infrastructure plan.)

Now some centrist Republicans are waiting to see how moderate Democrats play their hand, including whether they counter progressives by threatening to tank the party-line legislation if the infrastructure bill doesn’t receive a standalone vote.

And despite ongoing efforts by Democrats to unify moderates and progressives around a price tag for the social spending push, some in the House GOP gleefully hope that neither faction in Pelosi’s caucus will back down, thus scuttling the entire infrastructure bill.

Such a total collapse for a party that controls the White House and both chambers of Congress would give Republicans the message they’d love to hammer home heading into the midterms: that Democrats are incapable of governing. It’s more than just conservatives who are visualizing a total Democratic implosion.

As one centrist Republican member remarked: “I can honestly see them getting nothing.”