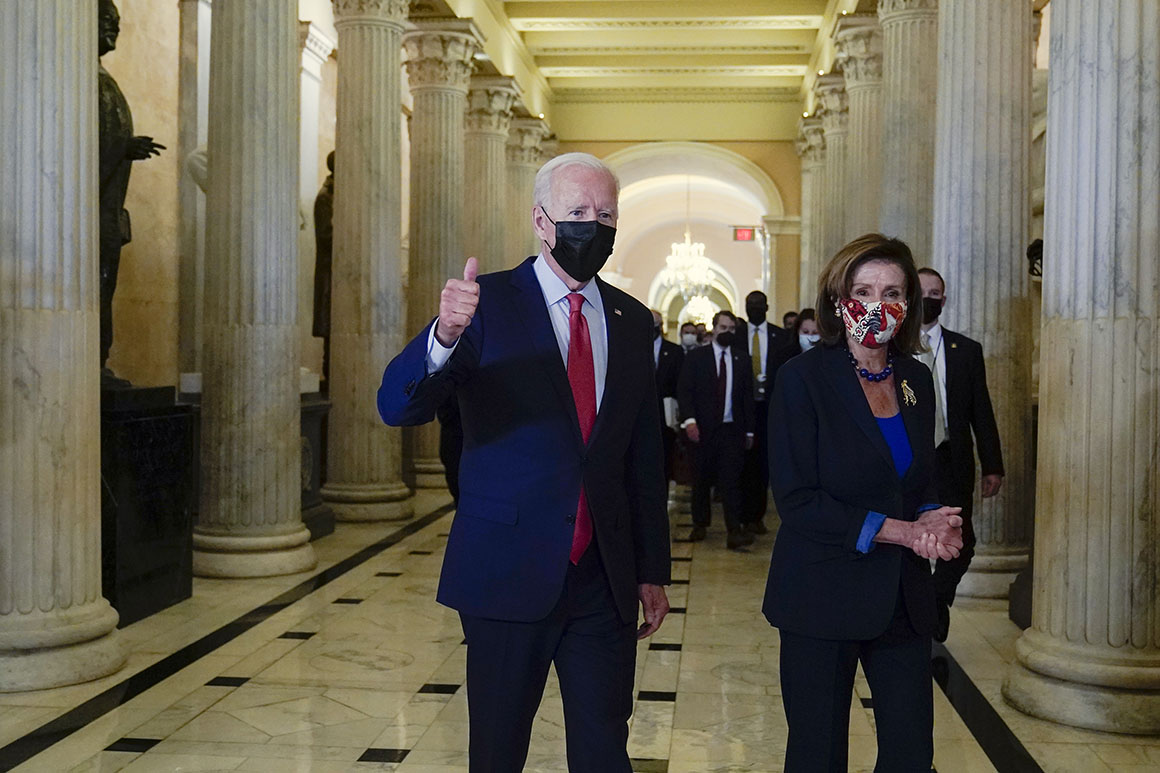 Congressional Democrats don’t want to talk about the discord around the total cost of President Joe Biden’s social spending plan, even as that elusive figure remains the biggest impediment to the party’s agenda.

The disagreement is holding up not only the larger social spending package, but also the bipartisan physical infrastructure bill, which progressives have threatened to tank absent a broader deal on the administration’s twin priorities. Without an agreement between progressives, the White House and Sens. Joe Manchin (D-W.Va.) and Kyrsten Sinema (D-Ariz.), Biden’s entire domestic policy agenda is in limbo.

And rank-and-file Democrats have found their hands essentially tied as they labor to cut a deal on reconciliation that will finally allow the House to pass the infrastructure bill that cleared the Senate two months ago.

“It’s time for [Senate Majority Leader Chuck] Schumer to bring them in and try to get to a number,” said Sen. Jon Tester (D-Mont.), referring to Sinema and Manchin. “Chuck has to do that. He has to bring them in … Nobody can do it except him, because anything that we agree on doesn’t matter.”

While an agreement remains up in the air, Democratic leaders now publicly acknowledge that the topline for the social spending plan will fall below $3.5 trillion, and instead end up closer to between $1.9 and $2.3 trillion, less than half of the $6 trillion that progressives initially sought. It’s a sign that reality is dawning on Democrats’ majorities as they feel increased urgency to pass the major pillars of Biden’s agenda before 2022, when Washington traditionally begins focusing on the midterms. The decision will also determine how much Democrats will need to raise taxes.

Senate progressives are split over whether they are willing to accept a smaller package. Despite Biden telling Democrats his proposed range last week, Sen. Bernie Sanders (I-Vt.) reiterated that $3.5 trillion was already a compromise, while Sen. Elizabeth Warren (D-Mass.) noted that the Senate already agreed to a $3.5 trillion budget blueprint back in August.

“Right now I’m still operating on the assumption that what we voted on, $3.5 trillion, is what we should be negotiating for,” Warren said.

Others, however, acknowledged that they will need to reset their expectations. While some said they were willing to accept a total cost below $3.5 trillion, they emphasized that they were more concerned with the policy — even though the number of new policies are directly affected by the topline spending number.

“Everyone is going to have to give and that includes progressives,” said Sen. Brian Schatz (D-Hawaii). “The premise that we’re going to have to compromise is self evident, but maybe it was worth saying in the Oval Office.”

Schumer and Speaker Nancy Pelosi are set to meet with White House officials on Monday night. Hours earlier, Biden broached the price tag issue with a group of roughly a dozen House progressives, reiterating in a virtual meeting that the overall bill would likely have to be between $1.9 and $2.3 trillion to win support from Senate centrists. Manchin has proposed $1.5 trillion, and told reporters on Monday that Democrats “understand where I am and I’ve been very clear about it.”

Biden’s mantra in the call was Democrats needed to fund what programs they could, given the constraints of their threadbare majorities in both chambers, according to multiple people familiar with the discussions. He floated several ways to scale back the cost of policies, such as reducing the years over which certain programs run or using “means-testing” on programs such as free community college.

While no progressives pushed back on the need to reduce the cost of the bill in the meeting, liberals privately say means-testing, or income-based limits, would be difficult to embrace. But in the end they may need to come to terms with Manchin and Sinema’s demands as the deciding votes in a tied Senate controlled by Democrats.

Sinema released a statement Saturday eviscerating Democratic leadership for delaying the vote on the physical infrastructure package and making different promises to competing factions of the Democratic Party. She also disclosed that she’s privately provided more details on her demands for the larger spending bill to Schumer and Biden, though most of her colleagues don’t know exactly where she stands.

While Schumer has engaged with moderates constantly over the past few months, it’s not clear when he will meet with Sinema and Manchin next — or how much Biden will be involved.

Schumer and Pelosi are aiming to wrap up both the bipartisan infrastructure bill and the social spending package by the end of the month, an ambitious timeline. Whether they can meet it is highly dependent on how quickly a deal between the party’s factions can be reached.

The House will be out of session for up to two weeks, with plans to return whenever party leaders reach a deal to either pass the sweeping spending plan or address the looming debt crisis. But Pelosi and other senior Democrats have continued private discussions behind the scenes, soliciting members’ must-have priorities as they narrow the scope of the bill.

The White House has also scheduled calls with several groups of House members, including one on Tuesday morning with swing-district Democrats, the caucus’s most vulnerable members, according to multiple people familiar with the plans.

Sinema and Manchin met with Biden last week, along with White House staff, as the administration tried to reach an agreement on a framework for the broader spending bill ahead of a scheduled vote on the bipartisan physical infrastructure package. But it soon became obvious a deal would not be forthcoming, and Pelosi delayed the vote she had originally promised to hold by Sept. 27.

Democratic senators, however, emphasized that many of the deadlines are artificial and self-imposed. Sen. Ben Cardin (D-Md.) predicted that wrapping the entire package up by Oct. 31 would “be very difficult.” And Sen. Mazie Hirono (D-Hawaii) put it this way: “it’s so huge, it’s so transformational, that it gets done when it gets done.” It took the Senate weeks to write and clinch a bipartisan infrastructure package that’s far smaller than the reconciliation bill.

But before they can write anything on that larger package, Democrats need at least a framework everyone can agree to. And that’s the party’s primary focus at the moment.

“I’ve talked to a number of the progressive folks in our caucus, and depending on how the money is spent they would be OK with it. They wouldn’t love it, but they’d be OK with a $2 trillion figure, $2.5 trillion. Something in there,” Tester said. “There’s a gettable number.”

Nicholas Wu contributed to this report