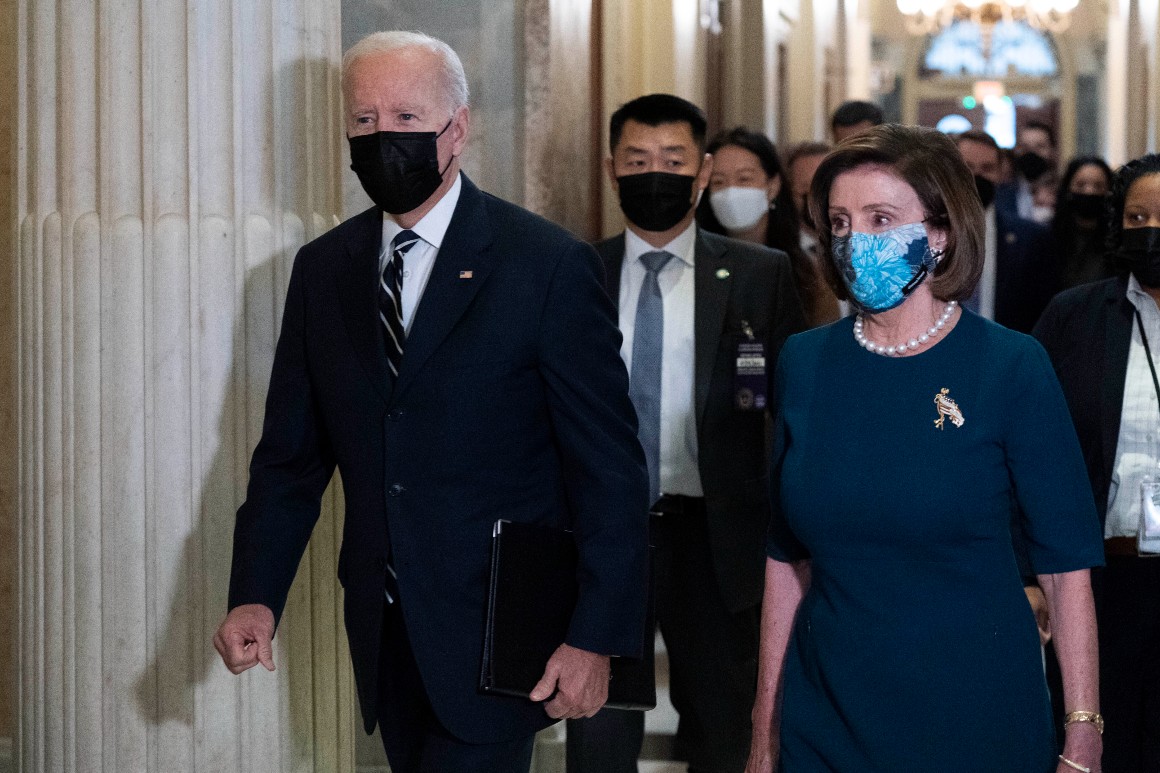 The move comes after progressives refused to relent in their opposition to the $550 billion infrastructure bill amid a standoff over Democrats’ separate, party-line $1.75 trillion social spending bill. It follows a visit to Capitol Hill by President Joe Biden, who personally asked House Democrats for their support on both the infrastructure bill and the separate social policy framework.

But Speaker Nancy Pelosi and her leadership team were ultimately unable to win over dozens of dug-in liberals in time for a Thursday evening vote. House liberals said they want to review the legislative text of $1.75 trillion social spending legislation the White House outlined Thursday and get a commitment of support from centrist Sens. Joe Manchin (D-W.Va.) and Kyrsten Sinema (D-Ariz.) — something the two have not outright given.

Despite an aggressive whipping campaign from Democratic leaders, as many as 30 liberal Democrats threatened to block the roughly $550 billion Senate-passed infrastructure bill, according to multiple people familiar with the vote-tallying operation. As House Democrats prepared to head home for the weekend in defeat, many were infuriated and left wondering how they had stumbled yet again, pointing fingers within their own party.

“I tried to tell anybody who would listen that we didn’t have the votes” among progressives to pass the infrastructure bill without fully fleshed-out social spending legislation moving alongside it, Congressional Progressive Caucus Chair Rep. Pramila Jayapal (D-Wash.) told reporters.

House Majority Leader Steny Hoyer had a short response when asked if this was an embarrassment for leadership: “We’ll get it done,” he said. Asked if he was disappointed Democrats didn’t pass infrastructure legislation Thursday, Hoyer said simply, “yes.”

Democrats will buy themselves more time on Thursday night when they vote to extend highway programs until Dec. 3 — the same deadline that the party leaders have set for themselves to address government funding and the looming debt limit.

Until they called the vote off Thursday evening, Pelosi and other top Democrats had been firm in their calls to vote. Projecting confidence, Pelosi teed up a House Rules Committee meeting on bill text that will make up the base of the social spending bill. Cabinet members and outside advocates also pushed liberals to back the infrastructure bill before Biden lands in Rome for his high-profile overseas trip.

“Let’s do it in a timely fashion. Let’s not just keep having postponements and leaving any doubt as to when this would happen,” Pelosi told reporters Thursday afternoon. “For those who said ‘I want to see text,’ the text is there — for you to review, for you to complain about, for you to add to, for you to subtract from, whatever it is.”

While some liberal priorities were included in the mammoth package of climate, health care and other social policy investments, others were scrapped — and multiple House progressives vowed to block the infrastructure bill given their uncertainty about the framework’s future in the Senate.

Both Manchin and Sinema publicly expressed support for the negotiations, but neither directly said they would vote for the package. Nor did they rule out a future attempt to make further changes.

Manchin, when asked where he stood, didn’t offer a clear endorsement of the framework, instead saying “this is all in the hands of the House right now” and adding that he’s operated “in good faith.” Sinema indicated she’s warm on the potential deal, saying in a statement that “I look forward to getting this done.”

The comments from the two centrists have only exacerbated progressives’ unease as leadership pressures them to release what they see at their main leverage point — the Senate-passed infrastructure bill.

“I think everyone is very clear that the biggest problem we have here is Manchin and Sinema,” said progressive Rep. Ruben Gallego (D-Ariz.), who has not ruled out a future primary challenge to Sinema. “They don’t trust them. We need to hear from them that they’re actually in agreement with the president’s framework.”

The progressive caucus held a more than hour-long meeting after Biden left, as Jayapal signaled her group still had significant concerns after the president’s pitch. One of her members, Rep. Cori Bush (D-Mo.), said simply “no” when asked if she would vote for the infrastructure bill after the president’s push. Another, Rep. Rashida Tlaib (D-Mich.), answered “hell no” on the infrastructure question.

Later in the day, Jayapal met with Sinema, Sen. Brian Schatz (D-Hawaii) and Rep. Joe Neguse (D-Colo.). The progressive caucus chair left that confab, which Sinema termed “a great discussion,” asking for a meeting with Pelosi.

There was at least some notable movement, however. Several Democrats described the meeting between Jayapal and Sinema as productive, a key step toward building trust across the warring factions.

Hours earlier Biden had made a direct plea for his party’s support. He stressed the implications not just for his upcoming summits with world leaders, but also Democrats’ electoral futures.

“I don’t think it’s hyperbole to say that the House and Senate majorities and my presidency will be determined by what happens in the next week,” Biden told Democrats, according to a source in the room.

It was during that meeting with Biden that Pelosi first told members she wanted to vote Thursday on the Senate-passed infrastructure bill, surprising some liberals in the room. Bush said she felt “bamboozled” by the demand. Pelosi later visited a progressive caucus meeting, where she was in listening mode as other lawmakers aired their concerns.

Much of this week’s political acrobatics — from the progressive threats to the Biden visit — felt like déjà vu to Democrats. In many ways Democrats are reliving the nightmarish week in late September when similar liberal objections forced House leadership to scuttle a vote on the Senate-passed infrastructure bill. Biden at the time yielded to progressives’ demands, though this time he is leaning on his left flank to support the bipartisan bill.

In addition to Manchin and Sinema’s opaque comments, another influential liberal, Bernie Sanders (I-Vt.), also held off on offering a full endorsement of the social spending plan. Sanders deemed it the “most consequential bill since the 1960s” but warned that it has “major gaps in it.”

While House Democrats did release some text of the White House deal, key elements are missing including immigration and drug pricing.

The $1.75 trillion framework had been announced first thing Thursday morning, just as Biden reached the Capitol for his remarks. Along with massive investments in home care and education, the most expensive items in Biden’s proposal are clean energy and climate investments at $555 billion, two years of free pre-school for 3- and 4-year-olds at $400 billion and $200 billion on tax credits for one year of the Child Tax Credit.

Privately, White House officials and congressional Democrats continue to spar over several left-out items, including paid family leave and prescription drug reform. On the latter, a senior administration official made clear there are “not yet enough votes” for it.

Yet Sinema had struck an agreement on prescription drug reform, pursuing a more limited approach than most Democrats support. It’s unclear whether that agreement can be added later to the framework.

Multiple House Republicans estimated earlier Thursday that they had 10 solid GOP votes for the Senate-approved infrastructure legislation, with the possibility of as many as 15 Republican votes. But that could all change — one Republican familiar with the count says the number could drop the longer Pelosi waits to hold a vote.

House Minority Leader Kevin McCarthy told reporters he expected “few if any” Republicans to vote for the bill if it was put on the floor Thursday.

“I don’t know if it’ll make it to the floor,” McCarthy said.