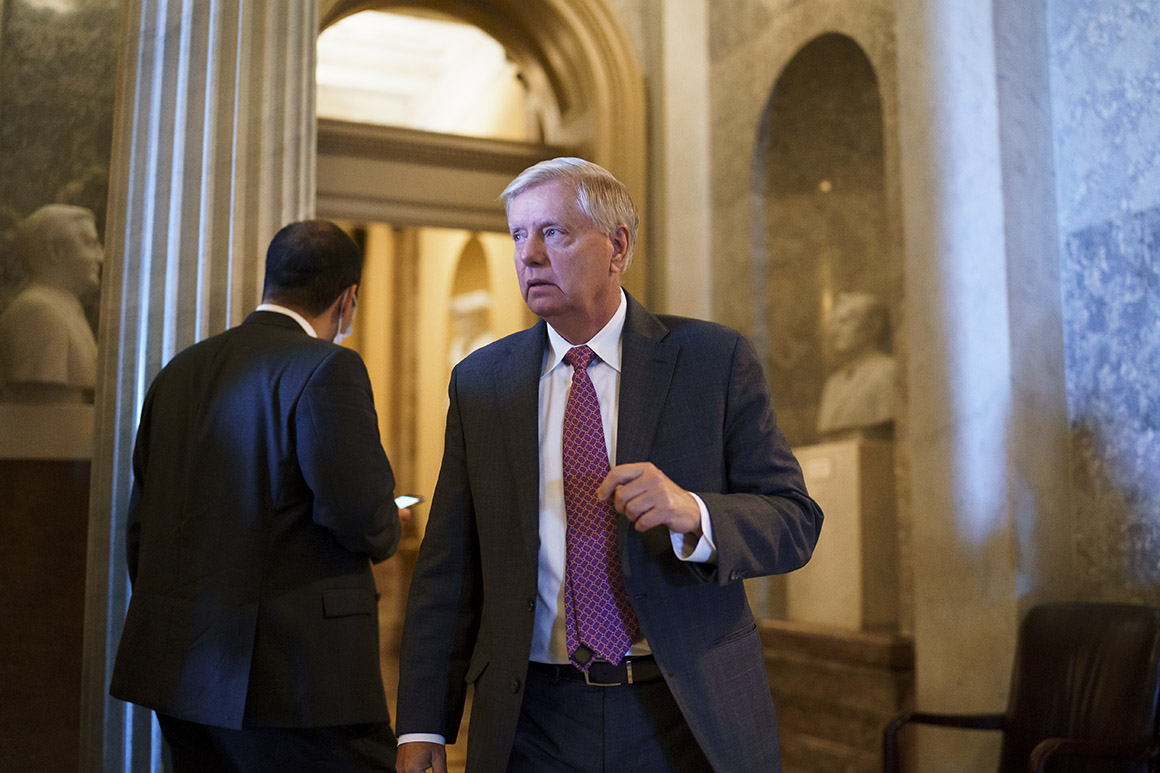 The Senate GOP’s budget point man, Lindsey Graham, wants to make Democrats work hard to lift the debt limit — but not so hard that it threatens a cataclysmic default.

Graham is carefully calibrating how hard to press his party’s opposition to raising the debt ceiling, and his ultimate goal is critical to understanding the Senate’s fiscal stalemate: He hopes to force Democrats “to pick a number” for how high the borrowing limit should go. That would mean using the complex tool of budget reconciliation, rather than a stand-alone vote to suspend the debt cap through the midterms.

A vote to set a specific dollar figure opens the door for Republicans to launch attacks on Democratic incumbents in next year’s midterms. Yet Graham said he doesn’t want to string the process out so long that it actually puts the nation’s credit at risk.

“I mean, I’m not going to be a complete asshole about it. But I’m going to make them take some tough votes,” Graham said in an interview.

As Graham and most other Senate Republicans prepare to filibuster a debt ceiling suspension on Wednesday, they’re resolutely opposed to helping Democrats lift the cap on the nation’s borrowing authority but divided over whether to push their fight as far as it will go. The heat hasn’t totally dialed up in the chamber yet, although it’s coming. And Democrats are privately discussing potentially changing filibuster rules to avoid a default.

Democrats may need to cancel next week’s recess to confront the Biden administration’s Oct. 18 deadline for a debt catastrophe, with Senate Majority Leader Chuck Schumer vowing to remain in session until a bill is on the president’s desk.

Schumer has refused to give into the GOP’s demands that his party use the laborious reconciliation process, which Democrats are also deploying to pass their massive social spending bill without Republican votes. Top Democrats argue that a debt vote through that special budget maneuver is unworkable and gives individual Republicans too much ability to derail the process. Behind closed doors, though, GOP senators are debating what they might be able to stomach to avoid a default.

Some Republicans say that if Schumer heeds Senate Minority Leader Mitch McConnell, the GOP should take the win and make reconciliation as easy as possible for the president’s party. Others are refusing to give an inch. And still others in the conference are wondering whether at some point their colleagues might break ranks and let Schumer easily hold an up-or-down vote on raising the country’s credit limit.

“When it comes to whether a consent vote would be a tool to do what they could do through reconciliation anyway, a more laborious process, I’d have to give that some thought. Because then it would cut to the chase,” said Sen. Mike Braun (R-Ind.), a die-hard fiscal conservative.

As far as dragging things out as much as possible with procedural hurdles or long amendment voting marathons, Braun replied: “I’m not necessarily interested in that.”

Sen. Ted Cruz (R-Texas), who’s leading the charge to filibuster any debt bill, was noncommittal when asked if he’d support smoothing the party-line path for Democrats to lift the borrowing limit. “It would depend on the circumstance,” he said.

It’s conceivable that Congress will butt right up against the Treasury Department’s deadline of Oct. 18, when the agency expects to run out of money to keep paying the government’s bills on time. Treasury Secretary Janet Yellen has warned that even waiting until the last minute could yield disastrous economic consequences.

“The only end place for this political theater is going to be complete surrender by Chuck Schumer, and he knows this,” Cruz said.

Schumer has regularly stiff-armed McConnell’s calls to steer a debt vote through the procedural thicket of reconciliation, though on Tuesday he declined to rule it out entirely ahead of Wednesday’s critical stand-alone vote. He argued Republicans should either supply 10 votes to overcome a filibuster or agree to vote on the borrowing limit with a majority threshold.

“Reconciliation is a drawn-out, convoluted process. We’ve shown the best way to go; we’re moving forward in that direction,” Schumer said after his party lunch, during which Democrats discussed a potential filibuster carveout for the debt ceiling.

Republicans could ease reconciliation for Democrats by yielding back debate time and smoothing the process in committee. Going that route to raise the borrowing limit would also trigger another vote-a-rama, an amendment-voting endurance run that allows the GOP to force a litany of tough votes.

There could even be two vote-a-ramas, because Democrats have to revise their budget, then pass a debt limit bill. The scope of all Republican amendments would be smaller, however, focusing just on the debt ceiling, and the GOP could make the process less painful by forcing fewer votes.

But that would require some coordination among the disparate wings of the Republican Party.

Sen. Shelley Moore Capito (R-W.Va.) said that if Democrats fold and go the reconciliation route, Republicans shouldn’t make it “an elongated exercise.” Sen. Kevin Cramer (R-N.D.), a Budget Committee member, agreed that he’s “not interested in throwing up a bunch of roadblocks.” And Sen. Josh Hawley (R-Mo.) said that once Democrats choose reconciliation, “I don’t see any need to prolong this. I think the important thing is, they take the vote.”

But retiring Sen. Richard Burr (R-N.C.) took a hard line against giving an inch. Burr said that even if Congress butted right up against default, he wouldn’t change up his tactics because Schumer “could solve this today.”