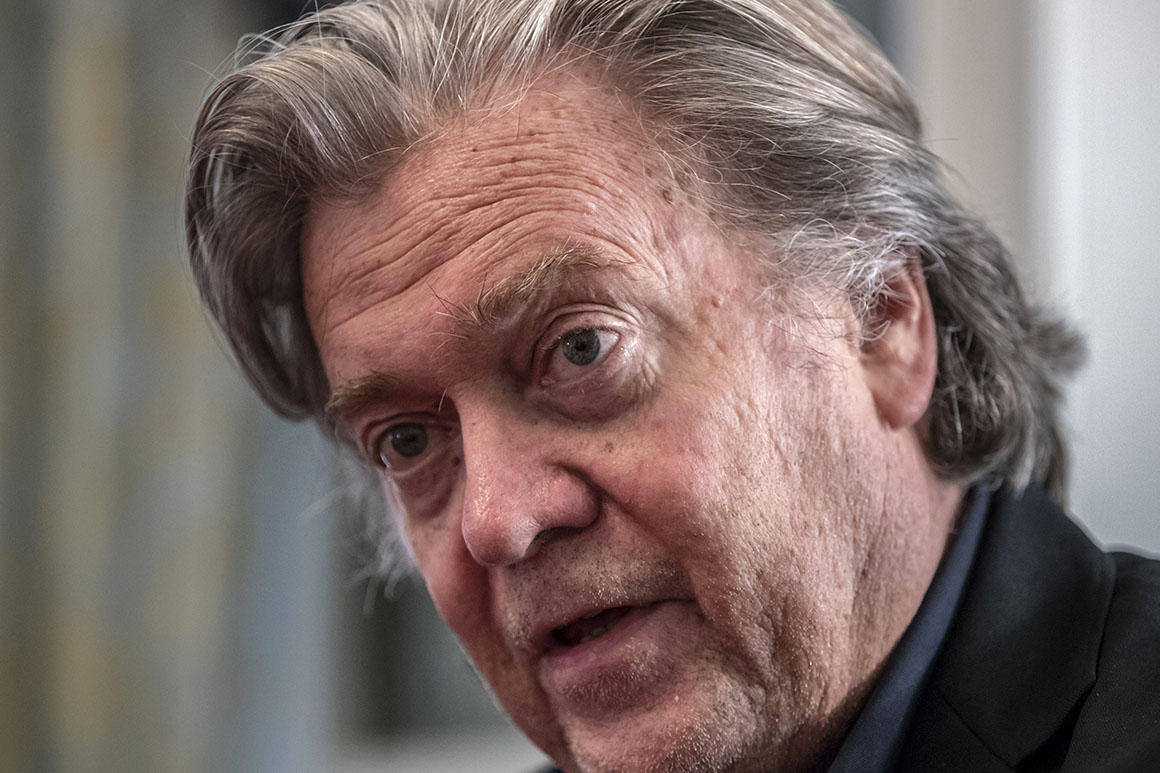 The congressional push for firsthand details of Donald Trump’s effort to overturn the 2020 elections is about to land in the lap of the Biden administration.

The House is set to vote Thursday afternoon to hold Trump ally Steve Bannon in criminal contempt for defying a subpoena to testify to the select committee investigating the Jan. 6 Capitol attack. The vote is expected to fall largely along party lines and will result in a criminal referral to the U.S. attorney’s office in Washington D.C., which then must decide whether to prosecute Bannon.

Attorney General Merrick Garland is certain to be asked about his intentions for the Bannon prosecution when he delivers slated testimony Thursday in the House Judiciary Committee. But so far the Justice Department has vowed the decision will be by the book and have given no hint as to whether Trump’s former senior adviser — indicted last year on conspiracy charges that were later dismissed following a presidential pardon — will face another federal prosecution for contempt.

“If the House of Representatives certifies a criminal contempt citation, the Department of Justice, as with all criminal referrals, will evaluate the matter based on the facts and the law, consistent with the Principles of Federal Prosecution,” said Bill Miller, a spokesperson for the U.S. attorney’s office in D.C.

“Every insurrection needs a headquarters,” said Rep. Jamie Raskin (D-Md.), a member of the Jan. 6 select committee, when asked about the significance of the Willard meeting.

Raskin declined to predict whether DOJ would take up the criminal contempt citation, expressing confidence that Garland and the U.S. attorney would “make a reasoned judgment” about Bannon’s defiance. Rep. Adam Schiff (D-Calif.) said he was optimistic that DOJ would act in alignment with the select committee’s urgency.

“I’m very confident that they will pursue” a contempt prosecution, he said.

The contempt vote also ratchets up the political heat surrounding the Jan. 6 investigation, putting the full House on the record as the select panel begins to look inward at the roles several GOP lawmakers played in Trump’s bid to overturn the 2020 election results. Given that Trump’s election challenge helped provoke the violent assault that overtook the Capitol, it’s become a centerpiece of the investigation. 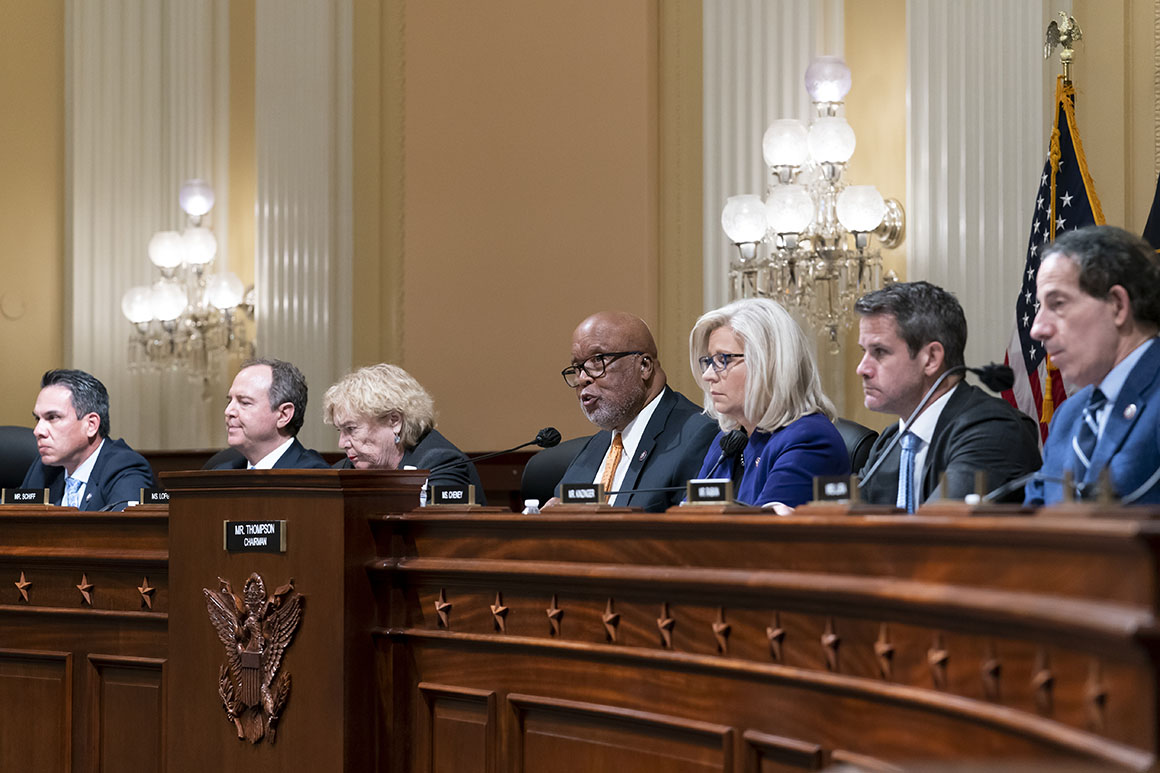 Rep. Liz Cheney (R-Wyo.), the vice chair of the select committee who lost her GOP leadership post thanks to her criticism of Trump, urged fellow Republicans on Wednesday “to step back from the brink.” Cheney further alleged during a House Rules Committee meeting on contempt that some of her party colleagues are “just trying to keep their heads down” about Jan. 6 because “they don’t want to anger” House Minority Leader Kevin McCarthy.

McCarthy, for his part, said Tuesday that he doesn’t see the select panel “as a real committee, since Pelosi has never let us participate.” Speaker Nancy Pelosi earlier this year rejected two of McCarthy’s picks to serve on the panel — including Rep. Jim Jordan (R-Ohio), a figure of particular interest in the investigation — prompting the California Republican to withdraw his entire slate of proposed GOP members.

The House GOP’s counterargument to the Jan. 6 panel began to take shape during Wednesday’s Rules panel meeting. Jordan and Matt Gaetz (R-Fla.) accused Democrats of leaning into the Jan. 6 investigation to distract from their domestic agenda’s woes and suggested the probe was encroaching on the First Amendment rights of pro-Trump rallygoers on Jan. 6.

Jordan is considered a pivotal figure by investigators because he’s among the GOP lawmakers who met with Trump in the weeks prior to Jan. 6 to discuss their plans for objecting to certification of the election. Democrats used his Rules Committee testimony as a chance to press for more details about his interactions with Trump, especially on the day of the attack.

“My understanding is, from my memory, I talked to [Trump] after the attack happened and we were removed from the chamber,” Jordan said on Wednesday, adding: “I had nothing to do with any of this.”

POLITICO reported in August that Jordan spoke to Trump more than once on Jan. 6 but contended he doesn’t “recall the times” of those conversations. According to a source with knowledge of one of those conversations, Jordan and Gaetz called Trump from a safe room that day after evacuating from the House floor, where they implored him to tell his supporters to stand down. The source declined to say how the outgoing president responded.

“I don’t get into the content of the conversation, but we, like everyone, wanted the National Guard to go,” Jordan said in August.

Republicans defended Jordan during the Rules hearing, saying he shouldn’t have faced questions about his talks with Trump during a hearing on holding Bannon in contempt.

“If somebody wants to talk to you, they can charge you with something,” Rep. Tom Cole (R-Okla.) told Jordan.

Jordan and Gaetz, both close Trump allies, declined to say they thought Biden legitimately won the 2020 election. (Trump’s former attorney general, Bill Barr, has said DOJ did not have evidence of fraud that would have affected the outcome, and numerous post-election reviews and audits have affirmed the results, turning up no hint of wrongdoing.)

Democrats rejected the counterarguments lodged by Jordan and Gaetz, in part by pointing to Republicans’ own use of criminal contempt citations to punish recalcitrant witnesses in the past. Chief among those past witnesses are former Attorney General Eric Holder in 2012 and former Internal Revenue Service official Lois Lerner in 2014. In both of those cases, the officials made voluminous documents available or provided testimony to the committees before Republicans went forward with contempt.

Bannon has done neither, instead leaning on a claim of executive privilege that most legal experts see as bogus — even if it touches on issues that may require lengthy litigation to resolve.

And this is not the first time Bannon has defied Congress.

The then-GOP-controlled House Intelligence Committee subpoenaed Bannon to testify as part of its Russia investigation in early 2018. Bannon refused to cooperate — first refusing to answer questions in two separate interviews — prompting Republicans to raise the possibility of holding him in contempt of Congress. They warned at the time that failing to do so would set a dangerous precedent for enforcing the power of a congressional subpoena.

GOP members, however, ultimately chose not to go after an ally of the president, fearing blowback from Trump.

Republicans argue that this time is different, because the Jan. 6 panel is led by Pelosi-picked members in what they argue is a hyper-partisan pursuit of Democrats’ political enemies. The GOP further warns that, if Democrats keep taking a hard line in the insurrection probe, they may face new investigations of their own if they lose control of the House in 2022.

“It’s a terrible precedent that’s being set,” said Rep. Rodney Davis (R-Ill.), one of the original members McCarthy had tapped to serve on the panel before withdrawing his picks. “And unfortunately, what’s going to happen is we’re going to see the impacts of some of the bad decisions that Democrats have made in the majority over the last two Congresses perpetuate into Republican majorities.”