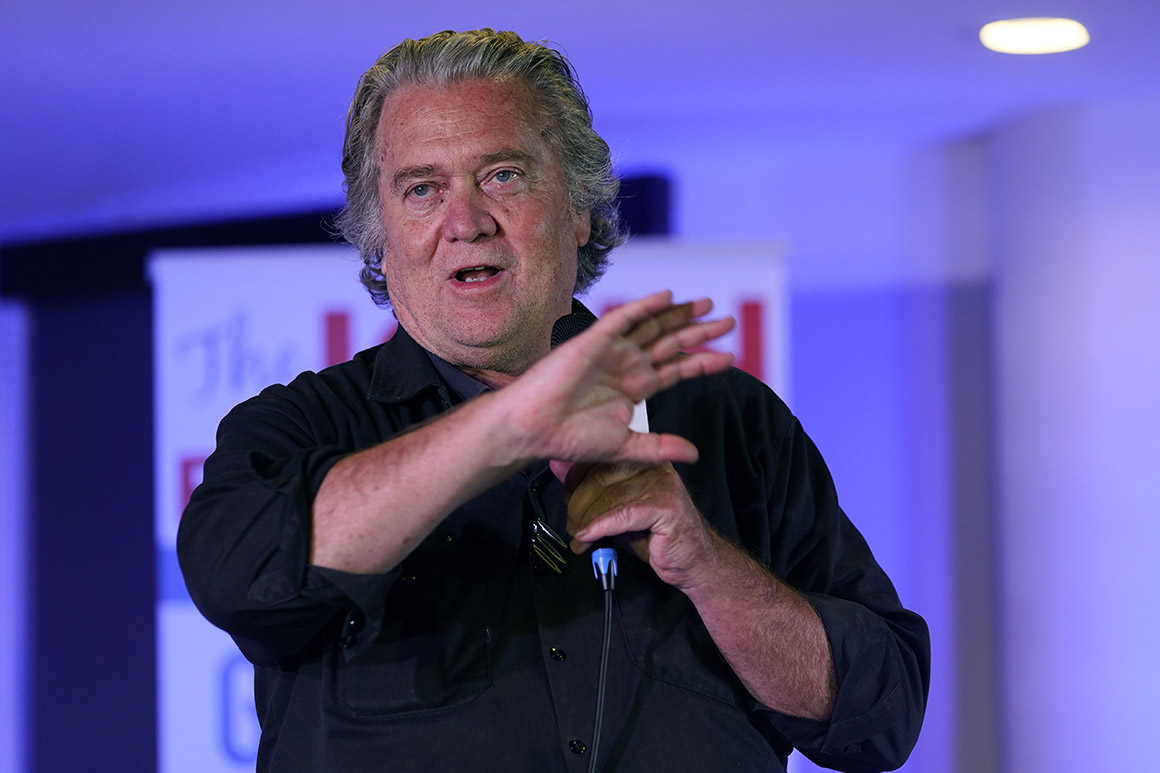 The head of the House panel investigating the Jan. 6 Capitol attack announced Thursday that he has scheduled a vote to hold former Trump adviser Steve Bannon in contempt of Congress.

The select committee will vote Tuesday on a report making the case that Bannon is in criminal contempt of Congress, according to its chair, Rep. Bennie Thompson (D-Miss.). That document will include language for a contempt resolution that could come to the House floor in the coming days.

The report will also detail the committee’s efforts to secure Bannon’s cooperation with its subpoena and his refusal to cooperate with the probe.

Investigators announced subpoenas of Bannon and three other former Trump administration aides on Sept. 23. Trump last week told all four men to stiff-arm the committee, as POLITICO first reported, but the committee has said two of those ex-aides, Kash Patel and Mark Meadows, are engaging with investigators. Bannon’s lawyer, however, has told the committee he will not comply with the subpoena.

Forcing him to comply will be a major test for the committee, signaling to numerous other witnesses just how much pressure investigators will exert to secure cooperation. Asked about the committee’s planned contempt vote, Bannon attorney Robert Costello directed POLITICO to his earlier letter to the panel which challenged its authority to compel Bannon’s testimony and promised to fight its efforts.

Trump released a statement after the announcement calling it “the January 6th Unselect Committee,” criticizing its latest move, and saying that “the people are not going to stand for it!” The statement did not specify what actual legal steps Trump may take next.

The outcome of the committee’s vote on holding Bannon in contempt is all but a foregone conclusion. Members have indicated for weeks that they would likely deploy criminal contempt against recalcitrant witnesses. If the panel approves holding him in contempt, the committee would send the resolution to the House floor for another vote.

If the full House, slated to reconvene next week, votes to hold Bannon in contempt — which is also all but certain, as Democrats have a slim majority — then the matter will be referred to the U.S. Attorney for Washington D.C. for criminal prosecution.

Whether the Justice Department acts quickly in response is a significant but unanswered question. Attorney General Merrick Garland has not indicated how he will handle such referrals from the House, though he’s slated to testify to the House Judiciary Committee next week and is likely to be pressed on the matter.

The acting U.S. Attorney for Washington D.C., Channing Phillips, is a career official who has overseen the Capitol investigation for months. Biden has nominated a permanent successor for the role, Matthew Graves, but the Senate has not yet confirmed him.

If the Justice Department prosecutes Bannon and secures his conviction, he would face up to a year in prison and up to $100,000 in fines. He has the option to appeal, and the courts would determine whether to delay penalties during the appeals process.

Despite the tricky and unpredictable process, committee members say they hope the threat of criminal charges pressures witnesses to cooperate, rather than go through a costly and onerous legal process. Those threats have worked to compel cooperation in previous congressional inquiries, and witnesses rarely attempt to see the entire criminal proceedings through.

But the Jan 6 committee also faces a tight deadline, as it seeks to compile a full report on the attack by the spring. The panel says many other witnesses who received subpoenas, including organizers of a Jan. 6 “Stop the Steal” rally that preceded the assault on the Capitol, have begun providing documents to the committee and offering testimony.