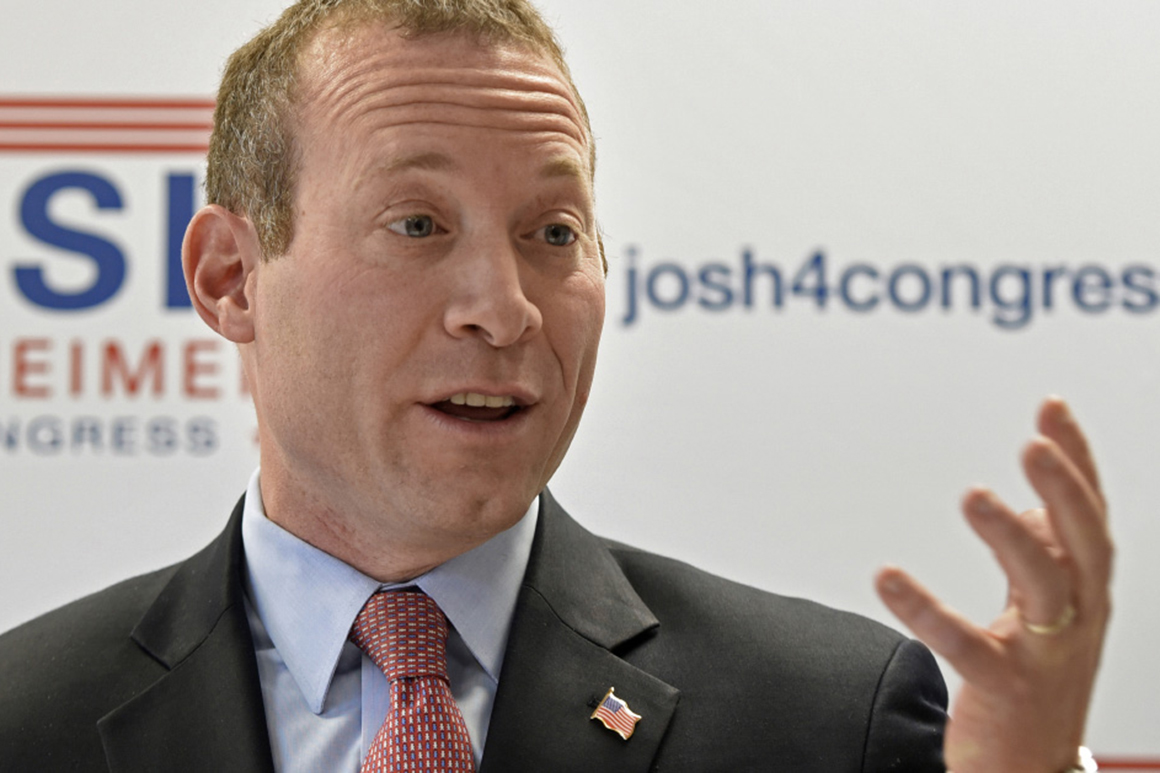 Few Democrats in the House have drawn the ire of progressives as much as Josh Gottheimer has in the past couple of weeks.

The three-term congressman from New Jersey has led a small group of Democrats who have sought to decouple the $1 trillion bipartisan infrastructure bill and a larger $3.5 trillion Democratic-backed spending bill. That went against the legislative strategy not just of the Congressional Progressive Caucus, but of the Biden administration as well.

The fight has energized some party activists, who say Gottheimer is ripe for a primary challenge after he’s taken shots at the “far left” for trying to “kill an historic infrastructure bill” — and even Speaker Nancy Pelosi.

“I think the temperature is there for somebody to run” against him, said Cathy Brienza, founder of Ridgewood JOLT, a local progressive advocacy group in Gottheimer’s district. “I think he should be afraid.”

But by all appearances, Gottheimer is not feeling any heat from the left, even as activists hold protests outside his suburban North Jersey district office, about 25 miles from New York City.

No primary opponents have emerged to challenge Gottheimer in 2022, partly because he’s a massive fundraiser who, sitting on $11 million in campaign cash, would dominate the airwaves in the nation‘s most expensive media market. At the same time, New Jersey Democrats understand that running a liberal in a district that had been represented by Republicans for decades could imperil a seat Gottheimer has managed to win comfortably.

Also working in Gottheimer’s favor is New Jersey’s unique ballot system, which gives sweeping influence over primaries to party leaders and makes the already tough challenge of ousting an incumbent even more daunting. Though this format has long favored the party establishment, it’s now having the unintended effect of helping insulate an incumbent who’s going against the legislative strategy of his party’s president.

The so-called county line, in which primary candidates are listed with other establishment politicians on the ballot, has been the bane of Democrats and Republicans who fail to win their party’s backing. But the fight against it has taken on a new intensity over the past year amid the ongoing schism between progressives and more traditional Democrats. A progressive coalition has filed a lawsuit challenging the ballot structure.

While many of those progressive activists have been allied with Democratic Gov. Phil Murphy, the governor won his first primary thanks in part to the strength of the line and ran on it again for his reelection primary in June despite facing pressure to eschew it.

On most New Jersey primary ballots, candidates endorsed by their local county party organizations are grouped together on the same row or column, from the top of the ticket to town council races. Off-the-line candidates are sometimes placed in a row or column by themselves, occasionally at the far end of the ballot in what’s referred to as “ballot Siberia.”

The system has helped political bosses — some elected, some not — wield control over New Jersey politics for decades, from Camden County to Hudson County. And even incumbents who fall out of favor with a single local power broker can find themselves stripped of the line, making their reelections a near impossibility.

“Because of the line and the county party system, there is less of a robust culture of primaries in New Jersey, like in New York, where you had a whole wave of Democratic legislators get unseated by primary challenges in 2018 and 2020,” said Joe Dinkin, campaign director for the Working Families Party, whose New Jersey affiliate has targeted Gottheimer’s district office with protests. “It’s structurally been harder for that culture of primaries to take hold.”

Experts say “the line” is a more effective tool against lesser-known insurgent candidates for offices like state Legislature and county commission than for members of Congress. Gottheimer’s office, for instance, will be the first one listed on the 2022 primary ballot since neither of New Jersey’s U.S. senators are up for reelection and no better-known candidates will draw voters’ eyeballs.

Still, there are signs Gottheimer has benefited. He didn’t even face a primary in 2018, the same year Alexandria Ocasio-Cortez and the rest of the original Squad won their seats in Congress. And last year, when Gottheimer did face a challenge from the left, the line seemed to make a difference, albeit a relatively small one, in his favor.

In that 2020 election, three of the four counties in Gottheimer’s district didn’t use “the line” format for their ballots. But Bergen County, which makes up about 80 percent of the district’s Democratic primary electorate, did. Gottheimer defeated progressive Arati Kreibich by a roughly two-to-one margin. He won by 34 points in Bergen County. In the three other counties that did not use the line, his margin was between 23 and 30 points.

“This suggests that in a closer race, the line would certainly have made a difference in the outcome,” said Julia Sass Rubin, a Rutgers University professor who has studied New Jersey’s ballot design’s effect on elections and advocates eliminating it.

In a statement to POLITICO, Gottheimer said the House must pass reconciliation bill and the bipartisan infrastructure package, “which includes two million labor jobs, climate resiliency, clean drinking water, and resources to fix our roads and bridges. I’m committed to doing what it takes to get them both across the finish line.

“I’m not a fan of those who are obstructing the President’s agenda, blocking the Gateway Tunnel, and risking the reinstatement of SALT and support for universal pre-k and child care,” he said.

For their part, some New Jersey Democrats are beginning to grow impatient with Gottheimer.

State Senate Majority Leader Loretta Weinberg, who for years has been a champion of the left in New Jersey politics, took issue with Gottheimer attacking Pelosi for breaching “her firm, public commitment” to vote on the infrastructure bill alone.

“I don’t know if he’ll have a primary fight next year. I’m not concentrated on it. Right now it’s about getting through the Biden agenda,” Weinberg said. “And I don’t think it was appropriate for him to have attacked Nancy Pelosi, who I and the majority of Democrats I know have enormous respect for.”

Democratic State Chair LeRoy Jones, while not mentioning Gottheimer by name, authored an op-ed this week unmistakably aimed at Gottheimer that urged the state’s House delegation to go with Biden’s strategy.

“Anything less than full party unity will invite political disaster and mean a failure to meet this critical moment,” Jones wrote.

The intensity of the backlash to Gottheimer has given progressives some hope that, should it continue, a competitive primary is a possibility.

“If there was ever a time when a Democrat could put themselves in such ignominy and shame to really merit a primary challenge that breaks through and gets people to pay attention … I think it’s behavior like this,” Dinkin said.