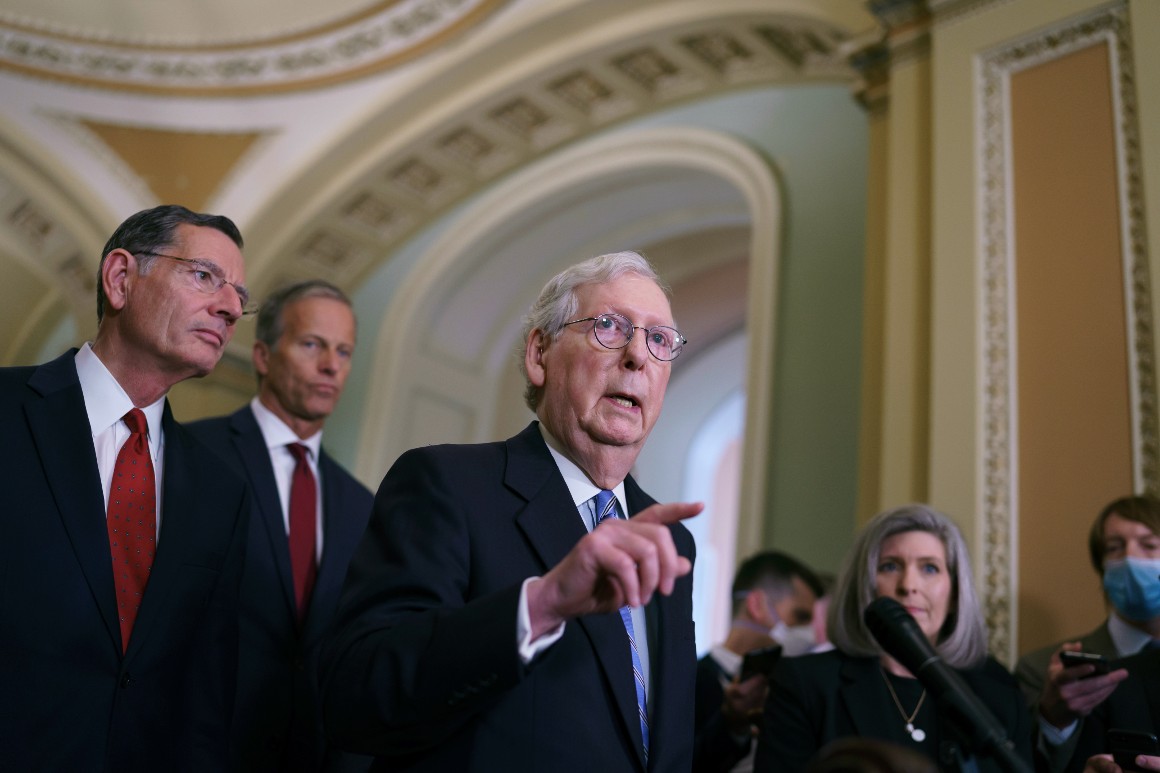 Even as the GOP prepares to block another debt ceiling suspension, Senate Republicans will offer an olive branch of sorts to Senate Democrats that could alleviate Washington’s biggest problem: an impending calamitous default.

Senate Minority Leader Mitch McConnell (R-Ky.) is expected to lay out a path forward to expedite the process for addressing the debt ceiling through reconciliation after the failed vote, according to several people familiar with the matter.

“Leader McConnell is going to call up a proposal that he’s going to discuss with Sen. Schumer, and I think that’s going to give us a way out of the woods,” said Sen. Lisa Murkowski (R-Alaska.)

That peace offering comes as Senate Republicans are set to reject Senate Majority Leader Chuck Schumer’s third effort in two weeks to lift the debt ceiling, or the cap on what the government borrows to pay the bills. Democrats need 10 Republican votes Wednesday afternoon to proceed with debt limit-lifting legislation, which they could then approve with a simple majority. But GOP senators are resolute in not helping the majority tackle the borrowing limit as Democrats pursue multitrillion-dollar spending plans.

Democratic leaders will use the failed vote to continue hammering Republicans as irresponsible for gambling with an issue that often necessitates bipartisan cooperation and could have enormous consequences for the global economy. Meanwhile, the Biden administration has said the Treasury Department could run out money in as little as two weeks. Before the vote, Senate Democrats had been planning to huddle in a special caucus meeting to discuss the approaching debt cliff.

“Democrats have been clear from the start, we’ll do the responsible thing,” Schumer said on the floor Wednesday morning. “Republican obstruction on the debt ceiling has been reckless, irresponsible, but nonetheless today Republicans will have an opportunity to get what they’ve been asking for … simply get out of the way and we can agree to skip the filibuster vote and so we can proceed to final passage of this bill.”

With time running short and neither side showing cracks in their resolve, Democrats are mulling a number of off-ramps, including making an exception to the filibuster rules for debt ceiling legislation, known as a carve-out. That would take away Republicans’ ability to block the effort.

But detonating the filibuster to raise the debt ceiling only works if all Democrats are on board. President Joe Biden signaled on Tuesday that a filibuster workaround is up for discussion, while Sen. Joe Manchin (D-W.Va.) rejected the idea Wednesday morning. Sen. Kyrsten Sinema (D-Ariz.), another key Senate centrist, hasn’t indicated whether she’ll support that approach, which both parties could weaponize to advance their policy priorities.

“My view is that if Republicans don’t get out of the way on their own, we should have a carve-out on this issue,” said Sen. Chris Van Hollen of Maryland, a Democrat on the Budget Committee, after Senate Democrats met with White House officials on Wednesday morning. “We’re on the precipice now of a cliff and any day now you could have a downgrade in our national credit rating. So time is of the essence.”

Meanwhile, Democrats insist that they won’t use the budget reconciliation process to raise the debt limit on their own, as Republicans have demanded. Democratic leaders say that reconciliation, or the same special budget maneuver that Democrats are deploying to pass Biden’s massive social spending plans, could prove time-consuming and arduous.

McConnell said Wednesday morning that Democrats have “spent two and a half months doing nothing and now they complain that they’re short on time.” He insisted that the majority party has had ample runway to wrap its head around using reconciliation.

Sen. Mitt Romney (R-Utah) noted that even the credit rating agency Moody’s expects Democrats to raise the debt ceiling through reconciliation in time to avoid a breach of the borrowing limit.

“I’m telling people there will not be a default and that Democrats have proven that they can tax as they want, spend as they want and raise the debt ceiling as they want,” Romney said. “Moody‘s came out yesterday and said don’t worry about it, and I think that’s at least as assuring as my comments.”

But Democrats emerged from party lunches on Tuesday even more determined to not use the special budget process. Even Sen. Tim Kaine (D-Va.), who last week had expressed he was open to using reconciliation, is now shutting the door on the possibility.

If Senate Democrats decide to pull the reconciliation rip cord, some Republicans have shown a willingness to ensure the process moves quickly, promising to throw up few GOP roadblocks.

“I don’t anticipate that it will be an elongated exercise,” Sen. Shelley Moore Capito (R-W.Va.) said on Tuesday. “I can’t speak for everybody, but I think generally speaking, in light of the time constraints, probably let them do what they should do.”

But Democrats continue to distance themselves from reconciliation as an option, which Republicans could ultimately use as a political cudgel during the midterms next year if the majority party is forced to settle on a new debt limit figure through the process.

“The Republicans have to allow us this vote tonight and we will own this because they’re afraid to,” she said. “We are governing, and we’re not going to let a bunch of people’s interest rates go up and cause havoc across this country simply because they’re trying to play politics. This is a time to govern.”