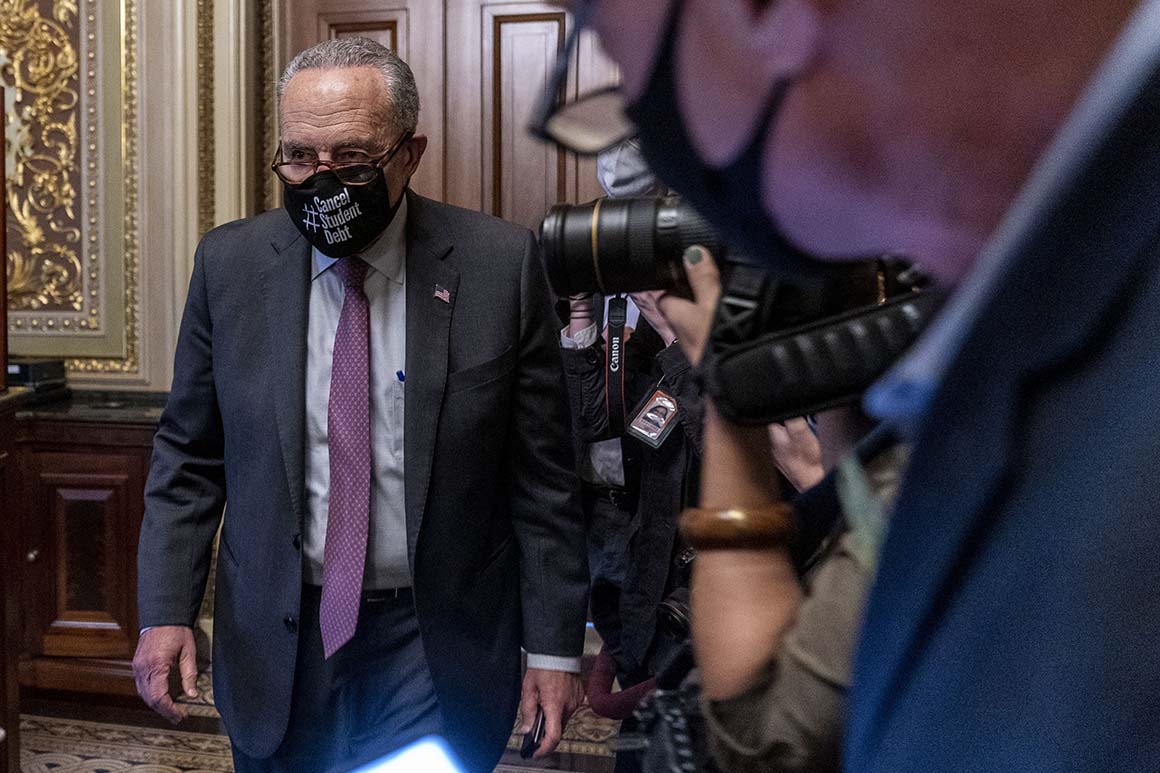 Senate leaders clinched a deal on Thursday to avoid an economic nightmare in less than two weeks, pushing their debt ceiling stalemate into December and creating a fiscal pileup around the holidays.

Senate Majority Leader Chuck Schumer announced the agreement on Thursday morning after the Senate adjourned just after midnight. The upper chamber could pass the measure later Thursday, but Democrats may need help from at least 10 GOP senators. Some Republicans, concerned about letting Democrats off easy, don’t want to allow Democrats to pass the measure with a simple 51-vote majority on the floor.

Votes on the agreement would mean scrapping a previously scheduled procedural vote on House-passed legislation that would suspend the nation’s borrowing authority through the end of next year. That vote was expected to fail amid almost unilateral GOP opposition.

With an unparalleled default on the nation’s debt temporarily off the table, both parties are billing the debt limit patch as a win. But the short-term fix merely punts a standoff that has already dragged on for months, and could serve to make the fight even more of a mess.

Both sides are still sticking to the arguments that sparked the fiscal cage match in the first place. And the new debt ceiling proposal, once passed by both chambers, means the threat of default would once again surface around the same time as a Dec. 3 government funding deadline, creating the potential for year-end budget fireworks.

Senate Minority Leader Mitch McConnell, who extended the extension offer on Wednesday afternoon, said it gives Democrats time to go-it-alone and eventually hike the nation’s credit limit using reconciliation, or the same special budget maneuver that Democrats are using to pass their party-line spending plan. In that case, Republicans could use the higher debt figure in political ads against the majority party as Democrats defend razor-thin margins in the 2022 midterms.

But Democrats emerged from a caucus meeting on Wednesday afternoon insisting that McConnell had caved by extending the provisional patch and that they won’t use reconciliation to lift the debt ceiling. Republicans must agree to a longer-term bipartisan solution, as the GOP has done in prior debt limit fights, Democrats say.

Some Democrats had entertained making an exception to the Senate’s filibuster rules for debt ceiling legislation, but the idea was quickly rejected on Wednesday by Sen. Joe Manchin (D-W.Va.), one of the party’s key centrists.

When asked how the new debt limit deal prevents Congress from having the same fight in late-November, Sen. Chris Murphy (D-Conn.) said it doesn’t.

“This is the only offer that we got from Sen. McConnell that didn’t involve the byzantine process of reconciliation,” he said on Wednesday.

“The bottom line is, Republicans know they’re going to get blamed for this,” Murphy said. “They’ve come to the table with a proposal that at least gets us to December. And hopefully by December they’ll realize that doing this three months at a time isn’t in their interest.”

The debt ceiling, however, only covers spending that has already been authorized by the federal government. The Biden administration has warned that the Treasury Department could run out of money as soon as Oct. 18, which could send financial markets into a tailspin, raise interest rates and jeopardize critical safety net payments to millions of Americans.

Treasury Secretary Janet Yellen has warned Congress could cause “irreparable damage to the U.S. economy and global financial markets“ by waiting until the last minute to raise or suspend the debt ceiling.