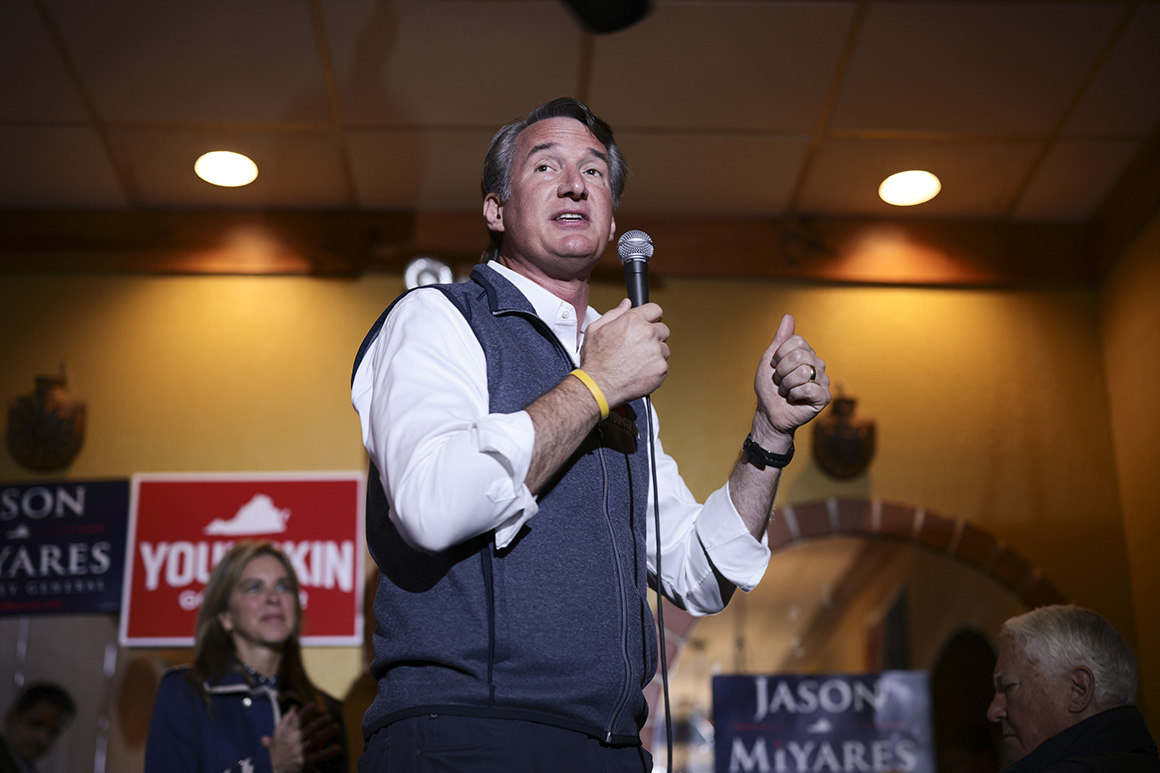 But to beat him in next week’s race for governor of Virginia, Youngkin needs to close the deal with key groups of crossover voters and other segments of the electorate that keyed Virginia’s sharp break to the left in recent years.

Three of the final surveys ahead of Tuesday’s election showed levels of strength for Youngkin, the Republican, that would have been surprising only weeks before: Christopher Newport University and Washington Post-Schar School polls depicted a tied race, and a Fox News poll had the GOP nominee up by a whopping 8 points among likely voters, in a state President Joe Biden carried by 10 points a year ago.

Hidden in the crosstabs of those polls is how Youngkin has managed to tie things up — and how he could become the first Republican in a dozen years to win a statewide race in Virginia.

Independents are flocking to Youngkin

In a polarized environment, Youngkin has staked his claim to the middle of the electorate: voters who don’t identify with either party. In three surveys released this week, Youngkin had 7- , 22- and 18-point leads among independents.

Virginia doesn’t have partisan voter registration, so these designations come from voters’ self-identification. And “independent” doesn’t automatically mean moderate. But voters unaligned with both parties can flip elections, even in an emerging blue state like Virginia. Roughly a third of the electorate there identifies as independent.

Correctly modeling who is going to cast ballots in an off-year race is tricky. Republicans enjoy a significant enthusiasm gap — though since taking control of the state legislature two years ago, Democrats have made it easier to vote in Virginia, raising the chances they can get their voters out to the polls despite a lack of excitement.

The Fox News poll showed more Republicans are likely to vote than Democrats, while the polls that are tied show slightly more Democrats casting votes than Republicans. That makes the independents particularly important — and Youngkin has a clear advantage there.

Youngkin has hung his campaign on education, and it’s working. Traditionally a Democratic strength, the GOP nominee has flipped the script, blanketing the airwaves and peppering his stump speeches in recent weeks with pledges to increase K-12 funding and raise standards — and curb perceived liberal excesses, like rolling back protections for transgender students and restricting how individual public schools should teach subjects around race and ethnicity.

The Fox News poll confirmed the finding, with Youngkin leading by 14 points, 56 percent to 42 percent, among likely voters who say they are parents.

It’s not just parents, though: When all likely voters are asked which candidate they trust most on education, the results mirror the overall horserace: McAuliffe leads by 1 point on education in the Washington Post-Schar School poll, while Youngkin leads by 8 in the Fox News poll.

It fits with a national trend that suggests that Democrats’ traditional advantages on education have been eroded. In this week’s POLITICO/Morning Consult poll, slightly more voters nationally said they trusted Democrats in Congress to handle education than Republicans, 43 percent to 39 percent. Nine months ago, just as Biden’s presidency was beginning in late January, Democrats’ lead on that question in POLITICO/Morning Consult’s polling was much wider, 51 percent to 29 percent.

In order to become the first Republican to win statewide since 2009, Youngkin always needed to win over some voters who backed Biden over then-President Donald Trump a year ago.

Polls suggest he is peeling away some Biden voters — or, rather, McAuliffe is struggling to unite all of those who backed the Democrat in the last presidential race. In the Washington Post-Schar School poll, McAuliffe is winning nearly 9-in-10 Biden voters, 89 percent. But Youngkin is capturing 99 percent of Trump voters, plus 6 percent of Biden voters.

A McAuliffe victory would be predicated on keeping the Biden base united — and getting them to show up on Tuesday. Nearly 4.5 million Virginians cast ballots in last year’s presidential election, while 2.6 million voted in the last gubernatorial election in 2017.

But the president’s current standing just isn’t what it was this time a year ago, when he won easily. Among likely voters in the Fox News poll, his approval rating is only 43 percent. And 14 percent of respondents who said they voted for Biden — a small but not-insignificant figure — now disapprove of his job performance.

The Trump base is ready to show up

Polls show Youngkin winning virtually every Trump voter who says he or she is planning to participate next week, but his ability to bring the former president’s base along while keeping Trump at arm’s length is even more impressive than that.

Youngkin is running up the score among key elements of Trump’s coalition. Both the Washington Post-Schar School and Fox News polls show Youngkin with identical 40-point leads among white voters without college degrees, 69 percent to 29 percent — demolishing even Trump’s already-yawning margins with this segment of the electorate.

Youngkin also leads nearly 2-to-1 in rural areas and small towns, 61 percent to 33 percent, according to the Washington Post-Schar School poll, suggesting he could improve upon Trump’s numbers across the state’s rural counties.

If Youngkin falls short on Tuesday, it could be because some of the less-reliable voters on whom he’s relying don’t show up.

During two debates last month, McAuliffe’s strategy was clear: Focus on efforts to stop the spread of coronavirus, including vaccination mandates.

Fast-forward one month, with Covid cases on the decline, and the mandates are still popular. But the issue isn’t the slam dunk McAuliffe hoped it would be, nor is it as top-of mind as it was. Among likely voters in the Washington Post-Schar School poll, just 10 percent rate the coronavirus as their top issue, well behind education (24 percent) and the economy (23 percent).

Across the polls, McAuliffe is still more trusted to handle the fight against Covid, but only slightly. The Washington Post-Schar School poll gives him a 10-point lead on the question of trust to handle coronavirus, while his lead on the pandemic is only 4 points in the Fox News poll. A survey on Friday from the Republican firm Echelon Insights actually gives Youngkin a 1-point lead on who is trusted more to handle the Covid-19 pandemic.

While both candidates say they support vaccination efforts, Youngkin opposes the mandates on public service employees and private businesses backed by McAuliffe. But in a sign of how politicized efforts to vaccinate Americans have become, Youngkin is winning 87 percent of voters who say they haven’t received a Covid-19 vaccine, according to the Washington Post-Schar School poll.

Among those who have received a vaccine, McAuliffe leads by 14 points, 55 percent to 41 percent. They make up a large majority of voters: 83 percent of Virginians over the age of 18 have been vaccinated against Covid-19, according to the Centers for Disease Control and Prevention.