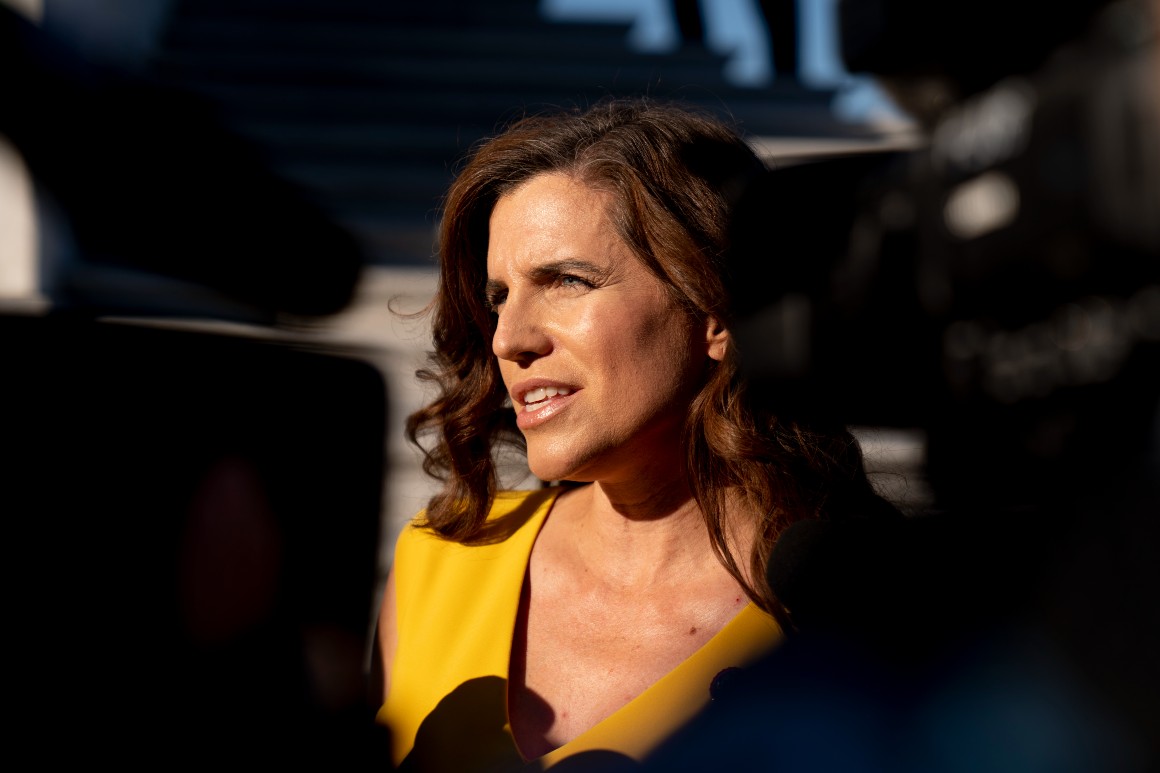 In the first days after the Capitol riot, GOP freshman Nancy Mace punched at her own party first. But she soon trained her blows on Democrats.

So House Republicans were surprised to see the South Carolinian vote on Thursday to refer a criminal contempt case against Trump ally Stephen Bannon to the Justice Department after Bannon defied a subpoena from the Democratic-led Jan. 6 select committee. Mace was joined by only eight other Republicans, most of whom had agreed to impeach Trump after the Capitol riot, and sat near GOP leadership staff on the House floor after casting her vote.

Though Mace said she cast that anti-Bannon vote to protect the power of a critical congressional oversight tool, some fellow Republicans viewed the move differently. Colleagues are now left to wonder if Mace, who worked on Trump’s 2016 campaign before disavowing the former president in the wake of the insurrection and then lowering the volume on her criticism, is slowly arcing her political trajectory back toward her post-Jan. 6 image as one of the few House Republicans skeptical of a Donald Trump-ruled GOP.

Mace’s vote on the Bannon contempt referral didn’t deter her allies: Fellow freshman Rep. Ashley Hinson (R-Iowa) lauded her “true grit” for breaking from most of her party. Yet it also emboldened her critics: Pro-Trump freshman Rep. Marjorie Taylor Greene (R-Ga.) said her colleague “stabbed … her voters in the back” by flipping on Trump.

The vote to hold Bannon in contempt “was a vote regarding contempt of a congressional committee, a vote to protect Congress’ authority to investigate and issue subpoenas,” Mace wrote Friday in her local newspaper, The Post and Courier.

“I said I would not blindly follow partisan politics, but rather vote for what is right — not for what is politically expedient — and, most importantly, represent our district,” she added.

Mace’s start in D.C. was anything but normal, after a 2014 primary challenge from the right to Sen. Lindsey Graham (R-S.C.) fizzled out. She came to Congress amid a raging pandemic; just three days after her swearing-in, Mace and her new colleagues were confronted with a violent assault on the Capitol as supporters of her party’s leader violently fought their way into the building to protest the certification of Joe Biden’s victory.

Her earliest response was a clear shove away to Trump. Mace told POLITICO earlier this year that she supported Trump’s “accomplishments” during his term, but those achievements had been “wiped out” by the chaos of Jan. 6 that forced Republicans to “start over.”

So did Mace fashion herself as a new face of a party in desperate need of a makeover after the violent pro-Trump riot. But the wave of Trump criticism that Republicans rode after Jan. 6, particularly from Mace and fellow lawmakers who carried more purple states or districts, ebbed away fairly quickly. Her criticisms faded with it.

The 43-year-old instead took on high-profile Democrats like Rep. Alexandria Ocasio-Cortez, fundraising off of an effort to dismiss the younger New York progressive’s story of trauma during the insurrection.

Splitting from one’s party often earns plaudits from across the aisle, but Democrats shouldn’t perceive Mace’s latest anti-Trump vote as an ideological shift, her colleagues say. Some of the 20 Republicans interviewed for this story predicted that her decision to strike at party leaders on the Bannon vote wouldn’t stop her from going to partisan battle on occasion.

She has alleged two run-ins with Antifa, including a June post with pictures of her house asserting it had been vandalized by left-leaning activists.

Mace’s office declined an interview request for this story. 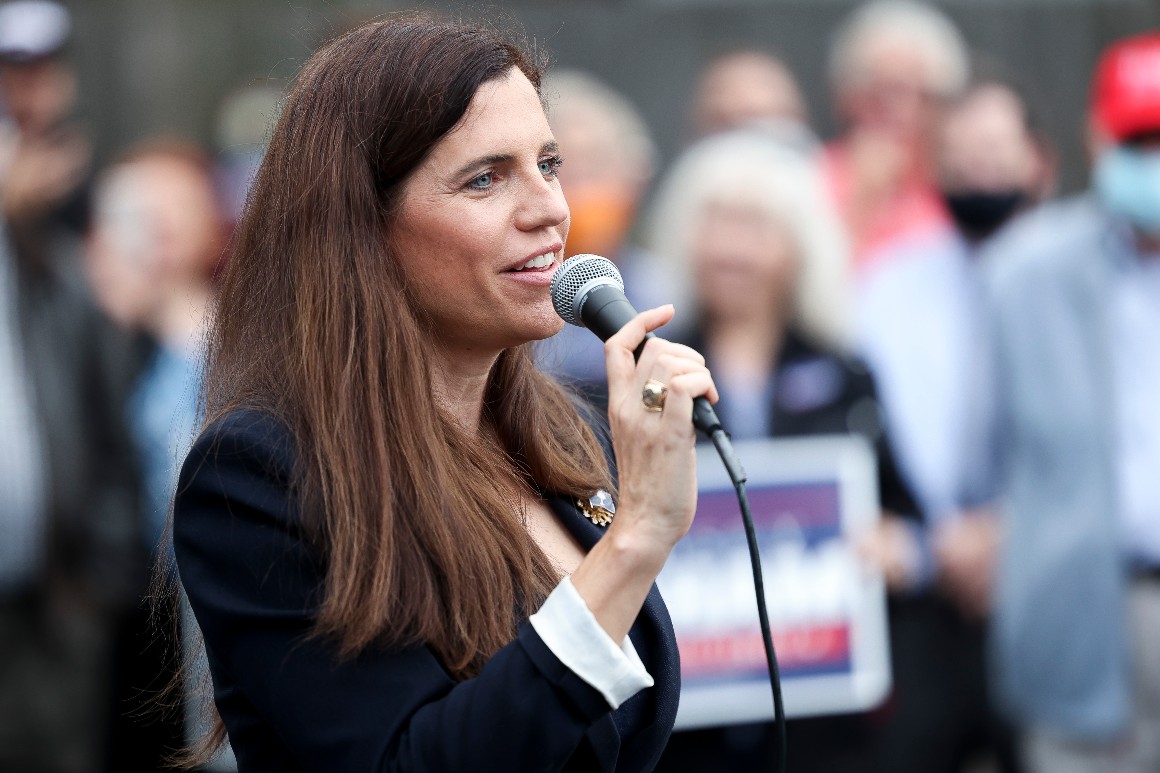 Multiple Republican lawmakers asked about her political positioning, speaking only on condition of anonymity, described Mace as a pendulum — swinging toward then away from Trump, followed by an overcorrection when she realized the GOP base began to rally behind him again after Democrats impeached him for a second time over Jan. 6.

After getting back in her party’s good graces by swinging at Democrats, though, Mace’s anti-Bannon vote surprised many of her colleagues.

“She was all about President Trump, until Jan. 6. She basically stabbed him in the back and her voters in the back, and I think that’s terrible,” said Greene, who grouped Mace in with other Republicans who voted to impeach Trump.

“She’s an anomaly,” one senior House Republican said. ”I’m not sure what her political calculation is all the time, but I guess maybe she’s gonna say she’s doing it on principle … I don’t really understand the game she’s playing.”

Mace’s friends in the party see her far differently — as a “rising star,” in the words of Rep. Brian Fitzpatrick (R-Pa.), who also voted to refer Bannon for contempt but not to impeach Trump. As the first female recruit to graduate from the Citadel, South Carolina’s state-funded military college, those closest to Mace in the House GOP conference say she has an independent streak and isn’t afraid to cross authority figures.

“She can take a lot of heat,” fellow freshman Rep. Blake Moore (R-Utah) said in an interview. “If she believes in something, and it’s against what leadership is pushing … you’re gonna see her vote the way she wants to vote.”

The South Carolina redistricting maps are still undecided, which means it is unclear how Mace’s district will look for 2022. Still, the freshman has a strong looking financial war chest to help her through her first reelection bid. According to the Federal Election Commission, Mace’s campaign PAC ended the most recent quarter with more than $1.3 million cash on hand.

She’s already drawn two GOP primary challengers, but some in her party see her latest move as a sign she’s more concerned about the general election. Others are betting her ambitions extend beyond the House. Whatever her plans, Mace is clearly comfortable shifting lanes as she finds her way.

“I think it’s really easy just to kind of go with the flow and find safety in numbers,” said Michigan Rep. Peter Meijer, the only freshman House Republican who voted to impeach Trump. “It’s a little bit less comfortable to chart your own path, but I found her to be incredibly thoughtful on policy and I don’t see any inconsistency in her approach.”