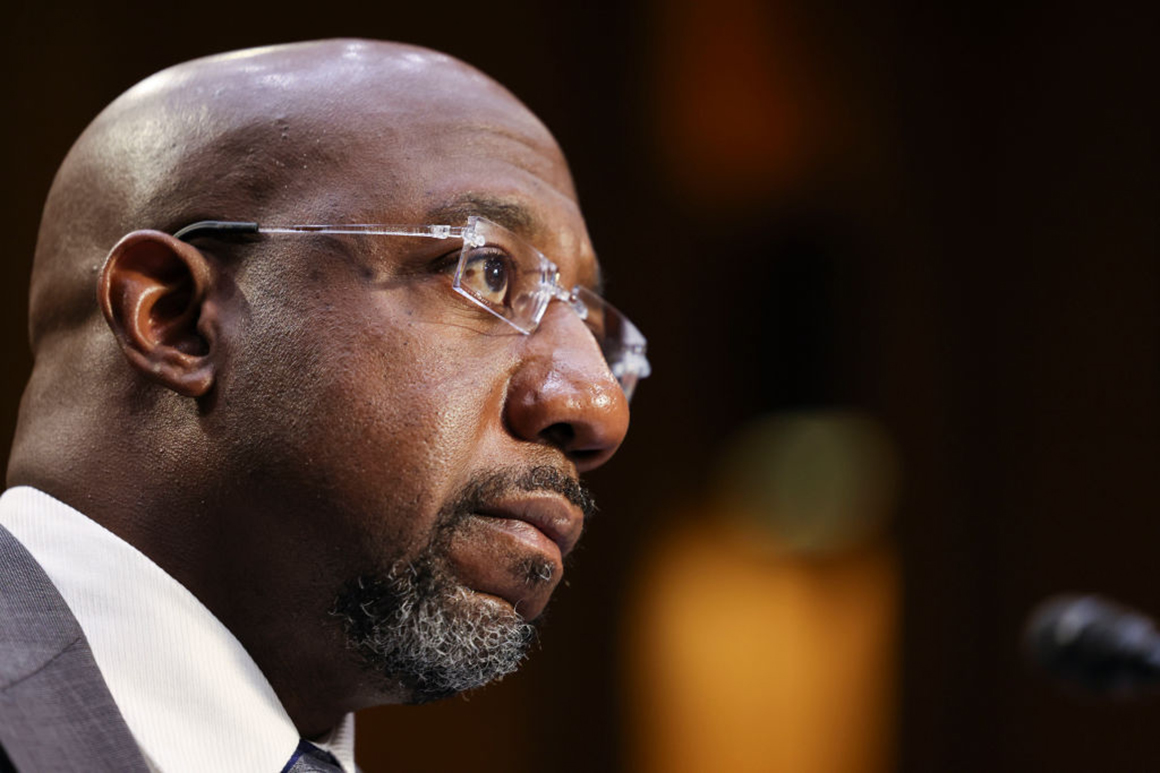 All across the Senate map — but particularly in the South — Black candidates posted blowout performances in the most recent campaign fundraising period, leading to an unprecedented cash windfall that stands to reshape the Senate in 2022 and beyond.

It’s a dramatic turn of events for a group of candidates who have traditionally struggled to raise the huge sums of money necessary to win marquee statewide elections. As a result, they’ve frequently faced skepticism about their electoral viability or failed to achieve buy-in for their campaigns from party brass.

“This may be an era where we can level the playing field,” said Donna Brazile, a former Democratic National Committee chair. “I think Black candidates have proven more and more than ever that we’re talented, but we didn’t have the resources to compete…this is the future. This is what I think Dr. [Martin Luther] King and his generation always envisioned.”

While individual Black candidates have posted robust fundraising performances in the past, there may never have been a quarter where quite so many raised quite so much. Warnock’s leading Republican challenger, former football star Herschel Walker, collected $3.8 million in his first five weeks of campaigning. In North Carolina, former state Supreme Court Justice Cheri Beasley, a Democrat, pulled in $1.5 million over the course of the fundraising quarter that lasted from July through the end of September.

Glynda Carr, founder and CEO of Higher Heights, which supports Black female Democratic candidates, points to Demings and Beasley as “proof of concept.”

“We continue to prove that we’re the best return on investment,” Carr said. “We see more and more donors and institutions supporting Black women early. And so we’re moving in the right direction.”

The standout numbers weren’t just limited to the South. In Kentucky, Charles Booker, a former state legislator fresh off a 2020 Senate Democratic primary defeat in which he was financially outgunned, raised $1.7 million. And in Wisconsin, Democratic Lt. Gov. Mandela Barnes pulled in $1.1 million in his crowded Senate primary, raising more from donors — both big- and small-dollar — than two of his wealthy white primary opponents, who needed huge personal loans to break the $1 million mark.

“I think that the [candidate] pipeline is definitely there. But what hasn’t been there before, is this sort of interest in funding African American candidates, and seeing where that goes,” said Kevin Harris, a Democratic strategist and former executive director of the Congressional Black Caucus. “That’s never happened.”

After losing Senate bids in 2018 and 2020 in Mississippi, former Democratic lawmaker Mike Espy can attest to the difficulty Black candidates have encountered in the past. His response when informed of the new numbers: “They’re gonna need it.”

After his 2020 loss to Sen. Cindy Hyde-Smith — he fell short by 10 percentage points, comparatively close for a Democrat in Mississippi — Espy independently commissioned a data firm to analyze his performance. The results of that study, which Espy shared with POLITICO, revealed that, despite a wave of voter engagement across the South, Mississippi only increased its voter registration by 1 percent.

To begin building momentum for the next Black Democrat to run statewide, Espy shared his entire donor contact list with the state party for free.

“I always had to beat down so many doors and push that rock up the hill like Sisyphus,” Espy said, adding that if he had more financial resources, he might be currently serving in the Senate.

“If there had been early money to identify this deficit very early in January,” said Espy, who served as Agriculture Secretary under Bill Clinton, “I could pull a voter registration drive. I could have done the kinds of things to engage the voters to convince them that they had it in their best interest to go and register.”

Interviews with more than a dozen current and former candidates, strategists and party activists suggest there’s no single explanation for the most recent fundraising results.

It helps that many Black candidates are challenging high-profile, highly polarizing opponents, a sure-fire way to stock the campaign coffers. The crop of 2022 candidates are also building on the recent successes of prominent Black candidates who preceded them — among them, former President Barack Obama, Vice President Kamala Harris, Warnock and Stacey Abrams, whose Fair Fight political action committee has raised more than $100 million since her 2018 loss to Georgia GOP Gov. Brian Kemp.

But they’re also benefiting from heightened attention to the effects of systemic racism in the aftermath of protests that followed George Floyd’s 2020 killing in Minneapolis.

“We saw a lot of Black candidates do really well, during that time, with donations surging candidates like Charles Booker surging,” said Nabilah Islam, a strategist and former DNC fundraiser. “I feel like there is definitely white guilt there.”

As much as anything else though, the standout fundraising — accumulated in an off-year, months prior to the start of campaigns in earnest — has been powered by a flood of money from small donors online. Many candidates who haven’t had access to big-donor networks or high-dollar events are suddenly able to stock their treasuries with thousands of small digital contributions.

Booker, who boasts that 98 percent of his third quarter haul came from grassroots donors and featured 55,000 contributions, said his early fundraising strength allows him to solidify his status as a frontrunner in the Kentucky Democratic primary — an advantage he didn’t have in 2020, when the party coalesced early behind Amy McGrath. He plans to invest in advertising and a more targeted field operation to mobilize rural voters. And now he can afford a second tour bus to reach them.

“We have to look at it more like an investment. If you think about the work that was done in Georgia, it was organizing that won us those Senate seats,” Booker said. “We’re working to build infrastructure for the long term. And so the money, instead of putting it all into these national ads, which you do need to do, but we need to invest more in the ground.”

Booker, like many others, has sought advice from current DNC Chair Jaime Harrison, who raised more than $100 million in his unsuccessful 2020 challenge to South Carolina Republican Sen. Lindsey Graham. Harrison’s fundraising prowess has made him a key resource for other Black Senate candidates, to whom he offers fundraising tips and staff suggestions.

“I share that information with the campaigns that call and ask, you know, ‘How did you do it?’” Harrison said.

In those conversations, the DNC chair details best fundraising practices and helps them shape a campaign strategy — one of his former senior advisers now helps run Demings’ campaign.

Harrison points out that until now, Black candidates were not the first choice of party leadership in competitive primaries. His own experience gave rise to a potent strategy: focusing on digital advertising and social media to circumvent the fundraising circles Black candidates were once excluded from.

“Part of the secret sauce for me — and I think Lindsey Graham picked up on it on the Republican side — was how you build a grassroots donor base. How do you tap into that type of energy in order to fund your campaign?” Harrison said. “There are techniques and things that you can do. And you can see the difference.”

For all the progress suggested by recent fundraising results, there’s no guarantee that the midterm elections will sweep in a class of Black senators. Booker’s haul in Kentucky, for example, was less than half of the $4 million that incumbent GOP Sen. Rand Paul pulled in — and it’s been years since a Kentucky Democrat even managed to lose a Senate race there by single digits.

In Pennsylvania’s open Senate seat race, where five candidates are vying for the Democratic nomination, the two Black candidates — Malcolm Kenyatta and Sharif Street — were vastly outraised. On the Republican side, Kathy Barnette, a MAGA candidate who’s a regular on conservative media, also brought up the rear.

“We still have a huge challenge of under-representation right now…we have to have a single Black woman,” said Quentin James, founder and president of the Collective PAC, which supports progressive Black candidates running for office and has endorsed three non-incumbent Black Democratic Senate candidates. “And so we have some catching up to do.”

The Collective PAC and a handful of Black political operatives have been organizing and fundraising on behalf of Black candidates to prepare for this moment. In addition to helping train and staff campaigns, the organizations have been lobbying top donors on behalf of candidates, aiming to challenge the stereotype that Black politicians won’t represent the interests of all of their constituents.

“I think there’s been a fundamental shift in thinking who can win elections, and now it’s understood, it’s not the boring old white guy again,” said Islam, the former DNC fundraiser. “You know, we need someone exciting. And I think that’s why a lot of Black candidates like Val Demings, Warnock, Herschel Walker even and Tim Scott are doing so well.”