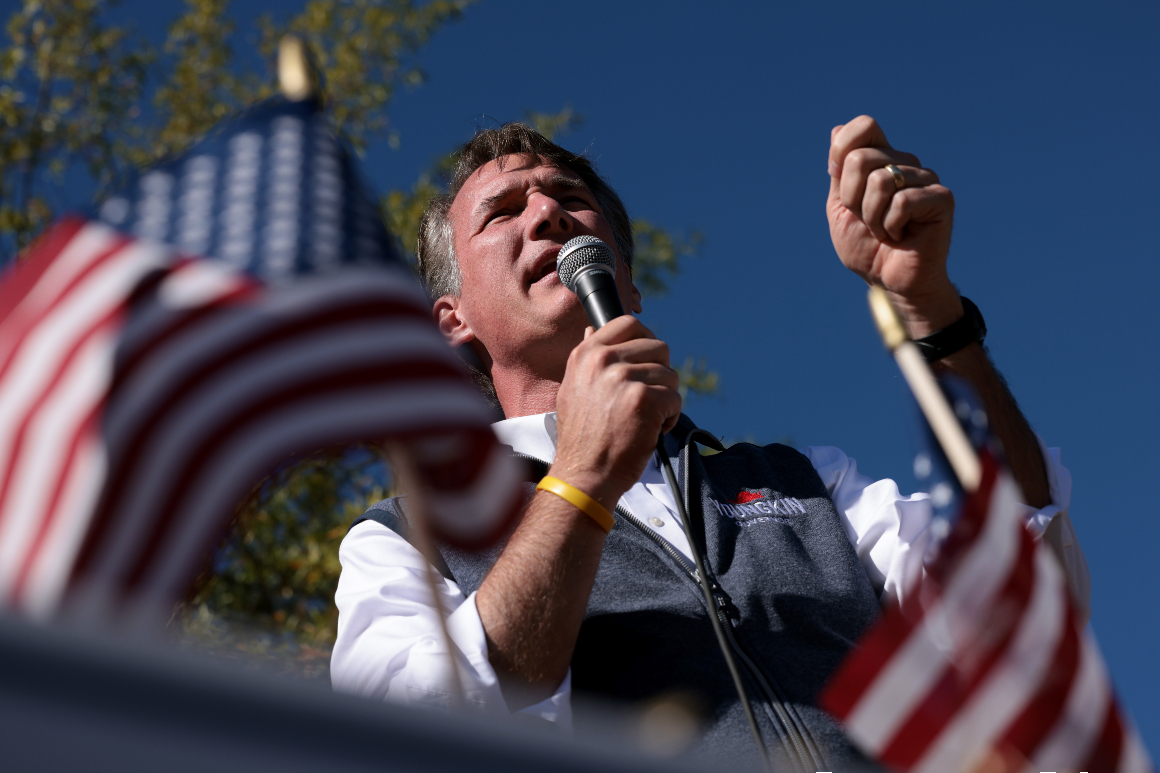 Republicans spent every election of the Trump era hemorrhaging suburban voters. Next month’s Virginia elections will be a big, early test of whether they can stop the bleeding.

It’s the GOP’s best chance in years to arrest their streak of new lows in the rapidly growing suburban counties that ring Washington, D.C., Richmond and Virginia Beach. Gubernatorial nominee Glenn Youngkin and a down-ballot slate packed with female recruits believe they’ve found the right formula, leaning into an issue set made for battle in the suburbs — education and the role of parents in public schools, taxes and the rising cost of living — while President Joe Biden’s approval ratings sag and congressional Democrats struggle to implement his agenda.

And above all, former President Donald Trump isn’t in the White House anymore.

Democrat Terry McAuliffe’s campaign has made Trump a centerpiece of the governor’s race, tying Youngkin to the former president in nearly 60 percent of his TV ads airing in the closing weeks of the race, according to AdImpact, an ad-tracking firm. But it’s unclear whether Trump inspires the same urgency among voters now that he’s out of office. Meanwhile, Youngkin is hammering his message even more single-mindedly at the end of the race: AdImpact’s data shows that every single one of Youngkin’s closing TV ads has centered on education and schools, a top issue for suburban voters.

“Virginia will tell us whether past frustration with Trump still lingers in the suburbs,” said Robert Blizzard, a Republican pollster who focuses on suburban voters. “You’ve got McAuliffe talking about ‘Trump, Trump, Trump,’ and Youngkin focused on suburban issues, like education, cost of living and jobs. That’s the tug of war for the suburbs.”

Should Republicans regain ground in the Virginia suburbs in two weeks, it could not only help flip the state red — it would inevitably set off alarm bells for Democrats preparing for next year’s midterm elections. Virginia Democrats’ strong showing in the suburbs in the last governor’s race foreshadowed Democratic gains around most every major metro area in 2018 and 2020, helping flip the House and Senate. Republican recovery in the suburbs this year could presage Congress swinging the other direction in 2022.

“If Democrats are bleeding in the suburbs now, no way you’re not bleeding the suburbs next year,” said Dan Sena, former executive director of the Democratic Congressional Campaign Committee.

Mary Margaret Kastelberg, a Republican businessperson running for a state House of Delegates seat based in Henrico County, outside of Richmond, said she’s witnessed a suburban attitude shift firsthand.

When she knocked on doors and talked to voters in her 2019 campaign, “I definitely heard about Trump,” she said. She lost to Democratic state Del. Rodney Willett by 1,300 votes amid a “constant drumbeat” about Trump in the media, Kastelberg continued.

Now, Kastelberg said, “I’m not hearing about him at the doors” as she runs in a rematch against Willett. “Trump has fallen down on the list of what matters to them,” she added. “This go-round, people are moving away from labels, and they actually want to know where I am on education, the top issue right now.”

Kastelberg is one of several Republican women running in suburban districts, part of an intentional effort by Virginia Republicans to recruit candidates who might appeal to voters there — especially the college-educated women who turned hard against the GOP in the Trump era. The Republican State Leadership Committee, the national group responsible for electing Republicans in state legislative races, said that 56 percent of the RSLC’s direct candidate contributions in Virginia went to female candidates.

Youngkin, meanwhile, is adeptly walking the tightrope between appealing to his conservative base while not alienating moderate voters. A tied Monmouth poll released Wednesday found the biggest swing in favor of Youngkin in recent weeks came from independent voters, who backed him by 9 points in the survey. White college graduates narrowly backed McAuliffe in the poll, while white voters without degrees swung hard to Youngkin and voters of color supported McAuliffe just as strongly.

Youngkin is a former chief executive of a private equity company who started a church out of his basement and coached his children’s basketball teams. He often appears on the trail and in TV ads wearing fleece vests and collared shirts, sporting an embroidered campaign logo.

“Especially in suburban areas, it’s important for people to see someone who reminds them of themselves,” said state Del. Emily Brewer, who served as the Virginia House Republicans campaign co-chair.

And since winning the GOP nomination in May, Youngkin has largely avoided the intra-party fights that have plagued Republicans in other states, where candidates compete to be the most Trumpian option. Virginia Republicans have folded in behind Youngkin because “we’ve lost for so long that there’s a lot of connective tissue between the base and the middle of the party,” said Zack Roday, a Republican consultant based in Richmond. “Folks want to win.”

Instead, Youngkin has seized on parents’ anger over Covid-related school closures, as well as tapping into conservative energy against “critical race theory,” an obscure academic legal theory that’s been used by activists to attack teaching about race in schools. 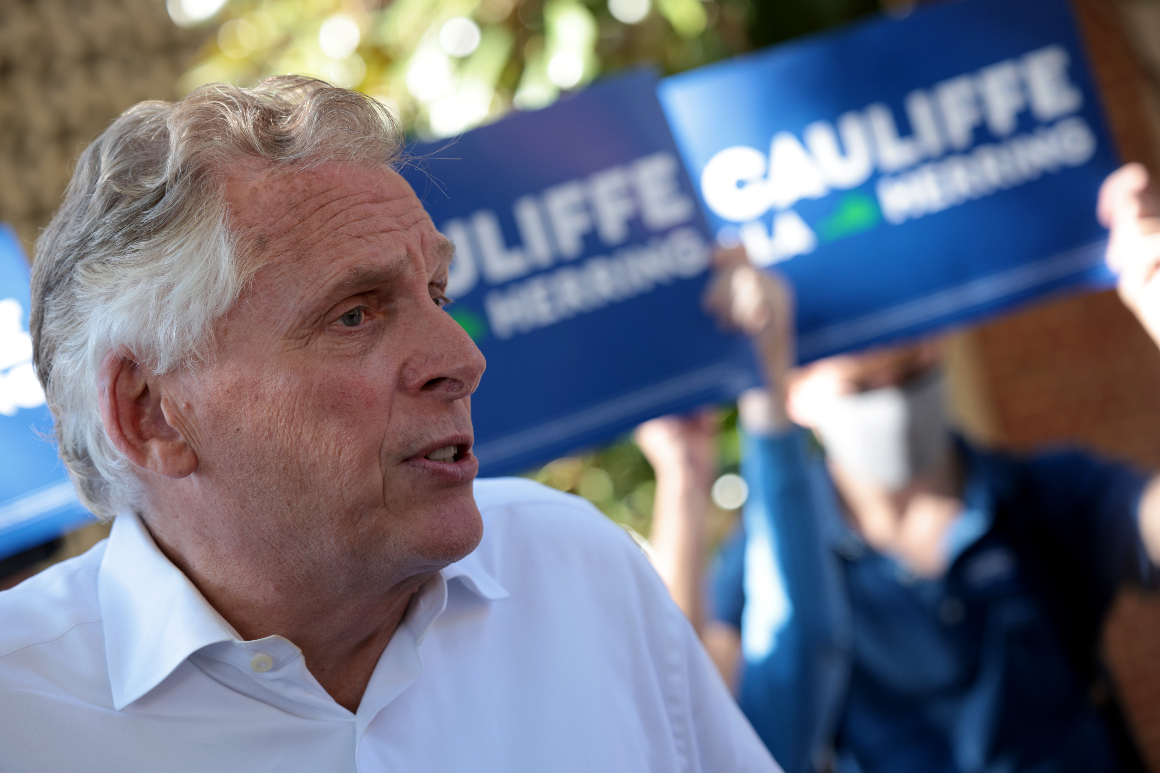 Even so, McAuliffe’s campaign has drilled into Youngkin’s ties to Trump, an effort to nationalize the race in the same way California Gov. Gavin Newsom effectively linked his GOP opponent to Trump during a failed recall effort this summer. McAuliffe’s campaign went after Youngkin for Trump’s endorsement and attacked him for saying that Trump “represents so much of why I’m running.” Earlier this week, McAuliffe’s campaign cut an ad of Youngkin supporters pledging allegiance to a flag that was carried during the Jan. 6 Capitol insurrection. (Youngkin called the act “weird and wrong.”)

It’s a strategy aimed at holding or even expanding the suburban gains for Democrats that characterized the Trump years. McAuliffe, in his successful gubernatorial run in 2013, won Loudoun County by 3 points; current Gov. Ralph Northam won it by a whopping 20 points in 2017. Outside of Richmond, Northam won Chesterfield County, which hadn’t backed a Democrat statewide since 1961. Biden would also win it in 2020 by 7 points.

In addition to tying Trump to Republicans, Democrats are leaning hard on vaccine mandates, paid family leave and abortion rights as key issues to keep suburban voters from swinging back to the GOP. They’re also bringing in Democratic heavyweights, including Barack Obama and Stacey Abrams, to stump for McAuliffe and drive up enthusiasm. Willett, the Democratic delegate who’s running against Kastelberg, acknowledged that two months ago, he worried that “voters didn’t have the same drive” as they did during the Trump era.

“The [Texas] abortion law has really motivated folks because it’s really scared people, showing them what happens with a single vote of a legislature,” Willett said. “For the folks who were lacking motivation are motivated again. Trump or Texas, whatever you want to call it, they’re concerned.”

But now, unlike in the Trump era, Democrats are on defense in the suburbs. “No question Republicans are going to claw back some suburban voters post-Trump,” said Tom Davis, a former Republican congressman who represented northern Virginia and led the National Republican Congressional Committee, “but suburban voters were already moving away from us before Trump.”

“Democrats have been steadily dating the suburbs, but they’re not married,” Davis added.

Not all Republicans are as optimistic, as they’ve watched college-educated women drift away from the party. “The fact [that] Trump is really not a factor makes a lot of Republicans feel like we have a shot here, but some of us feel like we’ve seen this movie before,” said one Virginia Republican strategist, granted anonymity to discuss the issue candidly. “And in the end, the demographics and the suburbs just give Democrats an edge that’s hard to overcome.”

And the window for Republicans to reopen the conversation with suburban voters may be brief, some Republicans warned, with Trump making more noise about running for president in 2024.

For now, Republicans are telling “moderates, never Trumpers, swing voters, ‘look, the water is fine, come back and in,’ but there’s one storm cloud hanging over the horizon,” said Tucker Martin, who worked for Virginia Gov. Bob McDonnell, a Republican, “2021 and 2022 may be a safe space for Republican candidates and suburban voters, but that could change very quickly in 2024.”

“There’s an opening for Republicans to run in these places,” Martin continued. “There’s a crack in the door, but I’m not sure if we’ll be able to kick it open.”