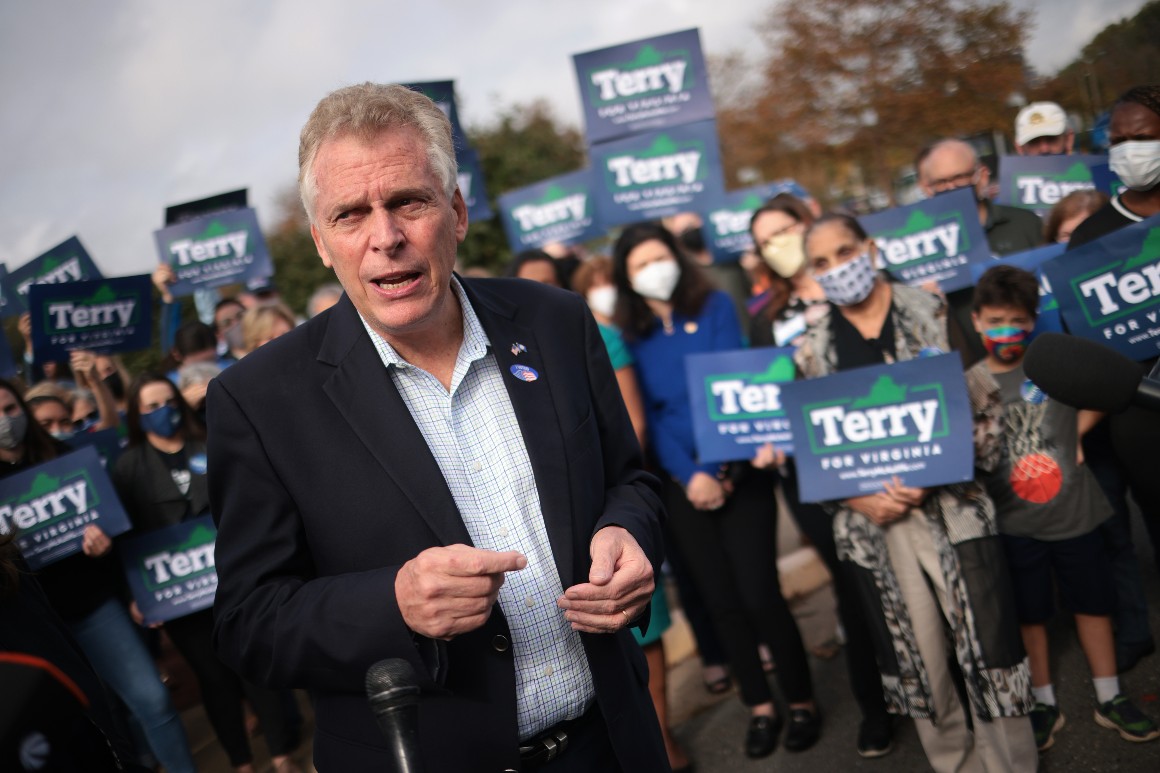 The Democratic Party’s fortunes are increasingly tied to someone who’s never served a day in federal office: Terry McAuliffe.

Losing ground in a Virginia gubernatorial campaign once seen as a near-lock for Democrats, McAuliffe has sought to nationalize the race — calling out congressional inaction and President Joe Biden’s waning popularity as he tries to mount a return to an office he held four years ago. If McAuliffe loses, it could put a chill on Democrats’ agenda and prompt hand-wringing over whether the party failed to boost him enough in a difficult race against Republican Glenn Youngkin.

McAuliffe’s allies on Capitol Hill have also ratcheted up their pressure campaign, demanding Speaker Nancy Pelosi put the Senate-passed infrastructure bill up for a vote in a move they say would help him ahead of the Nov. 2 gubernatorial election.

The effort has taken a gubernatorial race that amounts to a bellwether for Democrats’ popularity writ large and twinned it to their legislative agenda — if one fails, so too could the other.

“I’m hopeful that everyone will come to their senses by the end of the month,” said Rep. Filemon Vela (D-Texas). “If things don’t go well [in Virginia], there’s going to be a lot of different reckonings here.”

If McAuliffe doesn’t pull out a win, some pessimistic Democrats privately predicted a “collapse” on Capitol Hill, where party leaders are already struggling to unite sparring progressives and centrists around a roughly $2 trillion social infrastructure package. Meanwhile, the Senate-passed $550 billion bipartisan infrastructure bill is sitting on the shelf because the votes aren’t there in the House, much to Virginia Democrats’ irritation.

That bill is stalled out because Pelosi and other senior Democrats have yet to clinch a deal on the social spending bill with two key holdouts, centrist Sens. Joe Manchin (D-W.Va.) and Kyrsten Sinema (D-Ariz.). And despite public pronouncements of action by the end of October — when Congress will again be forced to address expiring highway and transit programs — Democrats appear far from even an outline of an agreement.

Election day in Virginia, not Oct. 31, is the real deadline for action on Democrats’ domestic priorities for many on Capitol Hill. Either way, the race is a tipping point. If McAuliffe wins, he will boost Democrats’ struggling legislative push. If he loses, it may set off a shockwave that could send already skittish moderates sprinting away from the tenuous talks.

“Terry losing is catastrophic for the agenda,” said one longtime Democratic aide, summing up the views of the party’s most vulnerable members on condition of anonymity.

Predictably, most Democratic lawmakers did not want to go on the record to forecast what would happen if Youngkin stunned their party in a reliable state and won. Democrats control both of the state’s legislative chambers, as well as every statewide elected office, but Bob McDonnell’s resounding gubernatorial win in 2009 demonstrated how hard national momentum swung away from Democrats as they tried to clinch the Affordable Care Act.

But a few tried to paint a rosier picture of the too-close-for-comfort Virginia race — that either way, it should be an alarm bell for Democrats to unite behind a once-in-a-generation bill that could touch every aspect of American life, from child and family programs to health care to the environment.

“I very much hope and don’t expect Terry to lose,” said Rep. Don Beyer (D-Va.), who lost a gubernatorial race in Virginia in 1997. “But in a worst case … I think the moderates will look at it and say if we want to get elected in 2022, we better show we’ve done some meaningful things in the last two years.”

Virginians started early voting in late September, and each successive day brings more pressure on McAuliffe to clinch what became a dependably Democratic state in the Trump era. The party has won two straight gubernatorial races there, including McAuliffe’s first term, and took the statehouse during Trump’s presidency after a long stint in the minority. Plus, Biden won by 10 points in 2020 in a state once known as a GOP stronghold.

But Virginia politicos say that the party needs to do more to help McAuliffe. Sen. Mark Warner (D-Va.), a former governor, said that like Biden, “Terry’s all about action and delivering,” but that gridlock on Capitol Hill while Democrats control both Congress and the White House undercuts the party’s message that it knows how to govern.

“The single best thing that can happen for Terry is either get the infrastructure bill or” a China competitiveness bill, both of which passed the Senate earlier this year but have stalled in the House, Warner said in an interview. “Internal squabbles on the Democratic side are preventing the president from a win on either one of those. And directly reinforcing the message that Democrats know how to govern is a challenge.”

McAuliffe is close with Pelosi — she’s even hosting a fundraiser for him later this month — but he’s continued to call out the House for failing to bring the Senate-passed infrastructure bill up for a vote. House leaders insist the bill will come up as soon as they have the votes to pass it.

Warner said that McAuliffe is talking to Pelosi with some frequency behind the scenes. McAuliffe is also calling, on a daily basis, for the speaker to make moves.

“The inaction on Capitol Hill today, it is so damaging,” McAuliffe told reporters this week. “Do your job. Quit talking, quit preening around to the press, get in a room, figure out what’s to get done and get it done.”

Privately, Democrats say Pelosi is still racing to get some kind of framework agreement with Manchin and Sinema before the end of October. Even an outline, those Democrats hope, could unlock enough progressive votes to pass the infrastructure bill in the final days before the Virginia election.

Progressives who’ve been major proponents of balancing a big party-line social safety net bill with the infrastructure package said they’d take that deal in order to send the latter, bipartisan bill to Biden’s desk in the days before the Virginia race.

“I want Terry McAuliffe to win. And I listen very carefully to what Mark Warner and Tim Kaine say about how we can help,” said Sen. Brian Schatz (D-Hawaii). “There’s a scenario in which there’s a framework for the reconciliation package that satisfies all corners of our party, and allows us to pass the” bipartisan bill.

But Pelosi has dismissed the idea that McAuliffe’s race factors into her timing for a vote on the infrastructure bill. And progressive leaders still maintain they have the votes to sink the legislation — vowing not to relent until there’s a firm agreement between the party’s two factions.

“Oct. 31 is the day that the highway trust authority runs out. That’s what we’re interested in,” Pelosi said this week. “It has nothing to do with anything outside.”

Zach Montellaro and Sarah Ferris contributed to this report.