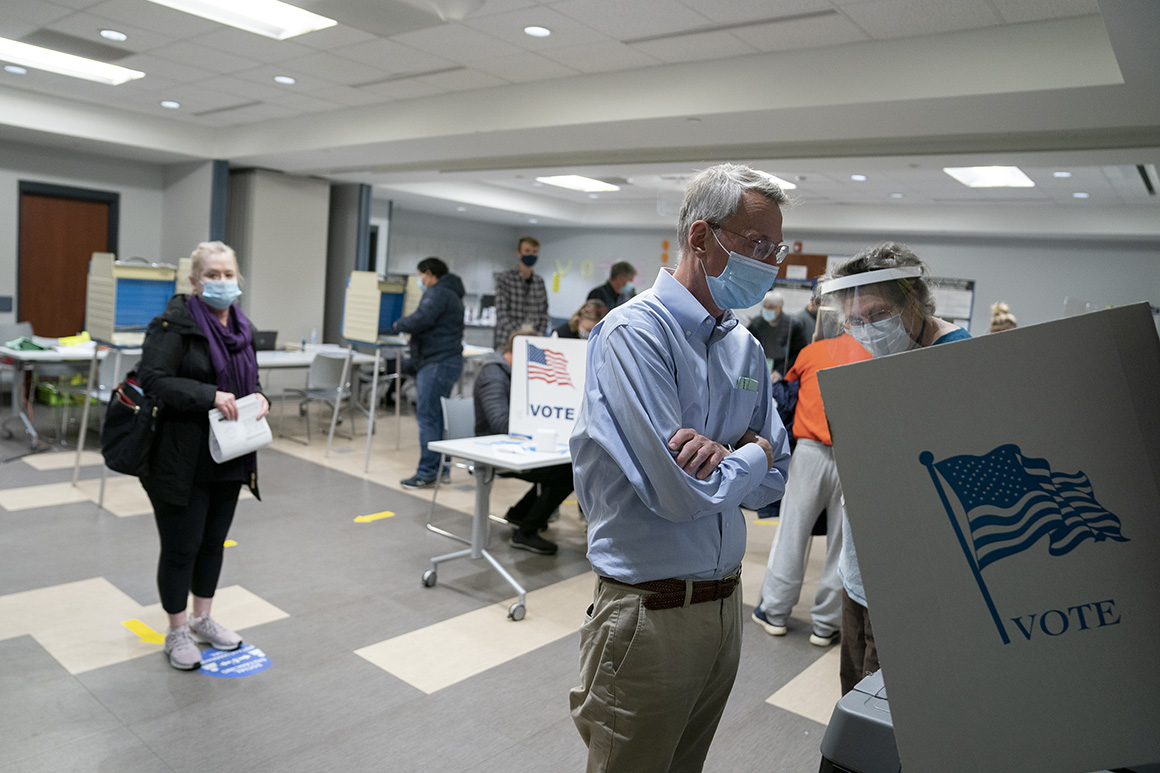 Recent polls have the high-stakes Virginia governor’s race as a neck-and-neck contest between Terry McAuliffe and Glenn Youngkin — and that means it could take days to determine the winner.

The vast majority of Virginia’s votes are expected to be counted on Election Day, and the state has made improvements to election laws earlier this year that will likely expedite the election night process — including some changes made, at least partially, to prevent conspiracy theories about the count from taking hold. But exceedingly close elections can take longer to resolve, including recounts. And in this case, Virginia law allows mail ballots postmarked by Election Day to be counted if they arrive by Nov. 5, three days later.

Former President Donald Trump and some of his supporters have already begun warning of voter fraud and laying the groundwork to question the veracity of Virginia’s elections after undermining faith in the 2020 results with a series of baseless claims. “The Virginia governor’s election — you better watch it,” Trump said in an interview with John Fredericks, a popular conservative radio host in the state, in September. “You have a close race in Virginia, but it’s not close if they cheat.”

Other states soon took center stage after Election Day 2020, but Virginia’s vote-counting was another prime example of how bad actors can sow disinformation by taking advantage of the general public’s unfamiliarity with election procedures. The Associated Press called the state for President Joe Biden about a half-hour after polls closed. At the time only 10 percent of the vote was reported in, and Trump was still leading in the early raw vote count. That lead in the incomplete count persisted for hours, which conspiracy theorists used to claim the state was stolen from Trump.

In reality, Biden won the state by a huge margin. Trump’s fleeting lead was due to a combination of Republican-leaning areas reporting results earlier than Democratic-dominated counties, as the AP noted in its explainer of its call, and Democrats disproportionately voting via mail ballots, which were generally reported later in the evening.

Some new changes should make the process even smoother and more clear in Virginia. A law passed earlier this year requires that in-person early voting and mail ballots be reported separately, after previously being reported in one big tranche, which election officials say will improve the process.

“That separation allows for a couple of different things: It means that people will know where the votes came from,” said Brenda Cabrera, the director of elections for the city of Fairfax and the president of the Voter Registrars Association of Virginia. “Dividing it up also allows us to get those results in faster.”

The new law also requires jurisdictions to begin preprocessing mail ballots no later than a week before the election. A lack of preprocessing of mail ballots is what made the mail ballot count — which was heavily Democratic in 2020 after Trump’s attacks on mail voting — take so long in states like Pennsylvania last year.

Scott Konopasek, the new general registrar of Fairfax County, said “it’s going to look like a wildly different night” in his county this year than in years past. Fairfax County, which is separate from the city of Fairfax, is a Democratic bastion notorious among election observers for its late reporting.

“Right at seven o’clock, or right shortly after seven o’clock, I’ll be reporting the absentee portion,” Konopasek said, noting that those numbers have historically been one of the last things in the evening. He said he anticipates early in-person voting results to come in within an hour of polls closing, and numbers from Election Day precincts should start rolling in around 8 p.m.

“The big giant bite of ballots that has, in the past, mysteriously shown up at the end is going to start out at the kickoff this time,” Konopasek said. He noted it was a jurisdiction-by-jurisdiction decision, and others will not have the same reporting timeframe that he does.

Loudoun County general registrar Judy Brown, for example, wrote in an email she anticipated that her jurisdiction would report “early voting numbers first followed by election day votes followed by mail ballots,” allowing for the possibility that mail ballots are reported in the same window as Election Day votes. She wrote that her expectation for when the county’s results are mostly reported would be no later than 9 p.m., two hours after polls close, “if all goes well.”

But if the election is extremely close, it could be a wait until Friday to find out the winner. The state allows ballots that are postmarked by the U.S. Postal Service no later than Election Day and received by noon on Friday to count.

Those late-arriving ballots “will be reported once the central absentee precinct meets again after the noon deadline on Friday” said Allison Robbins, the chief elections officer of Wise County, which is on the southwestern tip of the state.

That number was small in 2020, the first year where mail balloting was available to all Virginians, coming in at about 10,000 votes out of the nearly 4.5 million who cast a ballot last year.

Election officials are urging voters to have patience as results come in. Cabrera of Fairfax City noted that “anything reported on election night is unofficial,” and it has always been that way. She said that officials go through “a series of checks and balances” to make sure official results are accurate. Election officers noted that corrections to vote totals are routine. They all also expressed confidence in running a good election in a week.

“We’re not a top-down process in Virginia. It’s local officials in the 133 jurisdictions who manage and administer elections,” said Robbins, a former past president of the state’s local election officials association. “I’m very confident in Virginia’s processes and am extremely proud of the work that our local people do.”

A recount is also possible, if the margin between the two candidates is within 1 percentage point. A petition for a recount can be made by the trailing candidate within 10 days following statewide certification of the election, which is on Nov. 15. If the race is within half a point, the state picks up the cost, and if it is larger than that the trailing candidate pays for it.

Even still, there is a window of opportunity for bad actors to take advantage of the vote count, and parts of MAGA-world beyond Trump have already started to spread those conspiracy theories.

One America News Network, the far-right cable network favored by the former president, ran a segment over the weekend urging conservatives to volunteer in Virginia to guard against supposed fraud. “Are there enough Republican volunteers to make sure there’s no midnight ballot drop?” Christina Bobb, the OAN host who has been one of the chief proponents pushing for partisan election reviews across the country, said in the segment captured by the liberal watchdog Media Matters. “Are there enough volunteers bold enough to ask questions of suspicious people doing suspicious things?”

Virginia state Sen. Amanda Chase, who proudly dubs herself “Trump in heels,” is on the vanguard of Republicans who falsely say the 2020 election was stolen from Trump.

Youngkin, the Republican nominee, has not repeated those sentiments. After winning the nomination, he has said he believes Biden was legitimately elected, something he did not say directly during the primary. Youngkin said during the first gubernatorial debate that Virginia would “have a clear, fair election,” and both he and McAuliffe pledged to accept the results.

Democrats charge Youngkin is trying to have it both ways, on everything from prioritizing “election integrity” efforts during the primary and calling for audits of election machines, to accepting Trump’s support and campaigning with Chase. Youngkin, in turn, has called on McAuliffe to apologize for claiming the 2000 election was “stolen” following the Bush v. Gore Supreme Court decision, and for saying on the stump that Georgia Democrat Stacey Abrams would be the governor of her state if not for voter disenfranchisement that “took the votes away.”