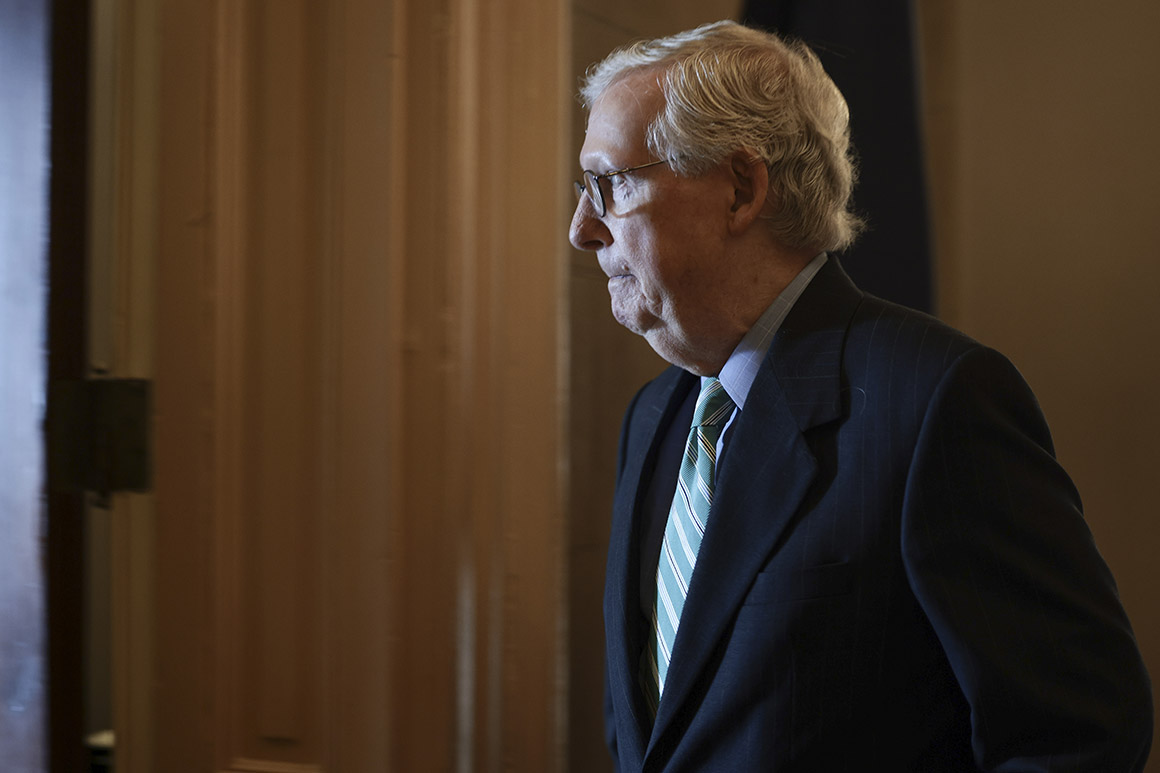 But White House officials are still planning for the Kentucky Republican to climb down as yet another deadline approaches in December, after he convinced 10 Republican colleagues to break the logjam last week.

Inside the White House, aides don’t view McConnell’s insistence as a hard “no.” Instead, they consider the recent vote in the Senate to raise the debt limit for two months a harbinger for the future, underscoring that Republicans could easily join Democrats through regular order if need be.

Such a conviction suggests that Washington is girding for another exasperating and potentially costly game of chicken, only this time, with the rest of Biden’s sprawling agenda thrown into the mix. McConnell has insisted that Democrats use the reconciliation budget process to pass a debt ceiling bill with only Democratic votes. But some Democrats bristle at the idea, arguing it could take up too much floor time and would set a dangerous precedent.

Debt ceiling stalemates have been an unnerving fixture of the U.S government in recent years, often involving horse-trading and one side blinking before the government defaults on its debt. This last go-around was different. Rather than demanding spending cuts in exchange for their votes, Senate Republicans made no serious requests of Democrats. Instead, they argued that Senate Majority Leader Chuck Schumer should raise the debt limit through reconciliation and without them, even as they said they wanted to see the issue resolved.

After talk among Senate Democrats turned to changing the filibuster rules to allow for a simple majority vote on the debt ceiling, McConnell acquiesced and ended the GOP filibuster, allowing a vote on the short-term extension. Veterans of the chamber believe another resolution will now happen by December.

“There’s going to be a lot of twists and turns and unforeseen developments along the way,” said Tom Daschle, the former Democratic Senate leader and a veteran of past debt limit fights. “I think the bottom line is they’ll find a way to get it done, whether it’s through reconciliation or something else.”

Biden officials stressed that they would again defer to Schumer and House Speaker Nancy Pelosi to help manage the legislative mechanics around getting the debt ceiling raised or suspended. But they contend Republicans’ insistence about refusing to participate in discussions rings especially hollow given that GOP senators just did so when pushed.

“Congress took a welcome step forward over the last week in putting a disastrous debt standoff behind us, and Republicans demonstrated with their votes last Thursday that there’s no reason why they can’t do the exact same thing in December by joining with Democrats to raise the debt limit instead of triggering another showdown that would jeopardize millions of jobs, pay for the military, and benefits for seniors,” White House spokesperson Mike Gwin said in a written statement.

Democrats on Capitol Hill are nervous about how it will all play out. While much of the focus has been on the Senate, House Democrats who have to defend close districts worry a messy standoff will complicate their efforts in the midterms, not to mention hurt their own standing, having been forced to vote multiple times for a debt ceiling hike. Some insist that it might be better to pocket their recent win on the issue and just do it via reconciliation.

That belief is rooted in the idea that while McConnell moved off his stance before, a default would be disastrous for the economy and the White House wouldn’t be able to dodge blame.

McConnell’s office pointed to his letter where he pledged not to help again on the debt ceiling, citing Biden’s massive social spending bill that Democrats are negotiating and Schumer’s “partisan, angry and corrosive” speech criticizing Republicans for walking up to “the cliff’s edge” after the most recent debt limit vote.

Undergirding the White House’s confidence in managing a second debt ceiling deadlock is a larger belief that Americans are tired of high-stakes political brinkmanship. They also think their pressure playbook — a slow boil of like-minded allies speaking out about the dangers and then culminating with Biden using the bully pulpit — ultimately proved successful.

Officials plan to take a similar approach of methodically ratcheting up the volume as the new deadline grows closer.

“Fundamentally,” Gwin concluded, “we cannot allow partisan politics to hold our economy hostage, and we can’t allow the routine process of paying our bills to turn into a political football that puts our country at risk every two years, or every two months.”