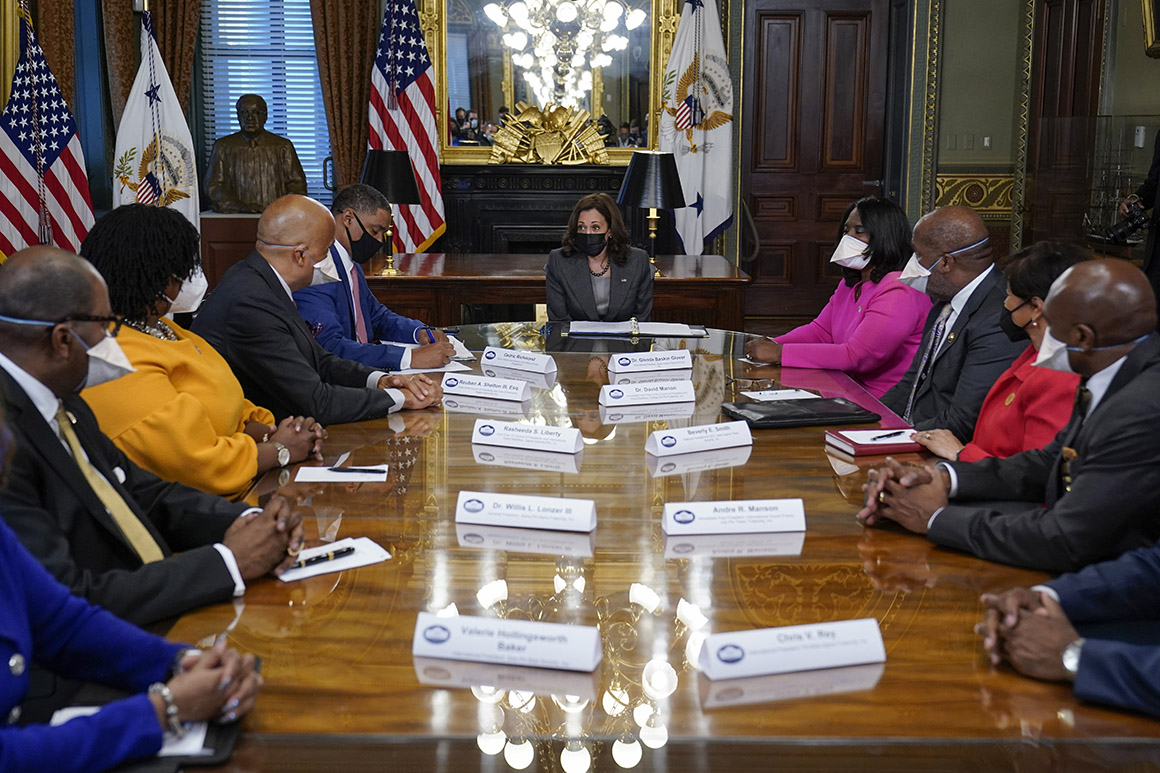 To successfully enact new voting rights and police reform laws, President Joe Biden may need some divine intervention. But if he can’t get that, at least he’s working to get some help from the Divine Nine.

Formally known as the National Pan-Hellenic Council, the Divine Nine represents nine historically Black fraternities and sororities and their alumni. It is arguably the most powerful organization in the Black community. And, until now, they’ve largely been an untapped resource for administrations looking to connect with Black voters.

The Biden White House is trying to change that, intensifying its outreach to the group as it scrambles to reassure a crucial voting bloc that is growing increasingly unhappy with the lack of progress on its core issues.

The Divine Nine boasts 2.5 million members worldwide, including some of the most influential and powerful Black people in the country and the Biden administration. That includes Vice President Kamala Harris, Office of Public Engagement Director Cedric Richmond, and House Majority Whip Jim Clyburn, a leading Biden ally in the Congress.

Unlike many of their other fraternity and sorority counterparts, where participation typically ends with college graduation, the Divine Nine organizations tend to be a lifelong active commitment, with strong connections and influence in the Black community. And they are ready to bring an orchestra of “skee-wees,” “roos,” and “oo-oops” to the White House grounds.

“We’ve been at this for quite a while and have had people in so many seats on those political tables for years. And we know that that makes a huge difference in terms of making sure that your voice is significant in terms of what it could do,” said Beverly Smith, current National President of Delta Sigma Theta, Incorporated. “So it’s the start of discussion with this administration, but it’s work the Divine Nine has been doing since its inception.”

The Biden White House sees the group as a particularly effective conduit of information to and from their own members and the Black community at large.

“People should not underestimate the power of the Divine. And that is collectively and individually as fraternities and sororities,” Richmond said in an interview. “Their reach is long and their reach is deep. And so for us, you don’t get that many organizations who affect such a broad swath of people.”

“I think it just makes perfect sense to have them at the table, be able to communicate our accomplishments, yes, but I also hear from them on their priorities and other things,” Richmond added.

Harris hosted an hour-long, in-person meeting with the Council of Presidents of the nine sororities and fraternities in her ceremonial office on Oct. 6 she requested — the first time all nine organizations have been invited to the White House to meet with a president or vice president, according to attendees and a White House official. Such a meeting didn’t even occur under the first Black president, Barack Obama.

The administration has also added a monthly meeting with Richmond just for the Divine Nine, in addition to a “Black stakeholders” call that already takes place every Friday at noon with the White House Office of Public Engagement.

The stepped-up outreach comes amid a surge in frustration among Black activists over Biden’s tenure. They have lost patience with the administration’s strategy of executive orders and speech-making and are demanding a more forceful response to Republicans’ blockade on policing, voting rights and other priority legislation, including pushing for a filibuster carveout. It’s a frustration that some members of the Divine Nine have been hearing and also share.

“I think the visibility of the effort and the push is most important. People will get frustrated and give up hope if they don’t see/hear what’s happening in the push significantly moving forward,” Smith said.

Smith hopes the increased contact with the administration will give the Divine Nine a way to tamp down some of that frustration with progress reports on issues like voting rights.

“[We can say] here’s the things that are happening. Here’s what has happened. Here’s the distance we’ve come already from X to X. [It] would help people understand the importance of what happened,” Smith added.

On voting rights, Divine Nine leaders know that a lot of the work is on Congress’ plate, but also believe that more public pressure from Biden would help the effort. And the president seems to be responding to criticism on that front.

At a CNN town hall Thursday night, Biden suggested the filibuster needed changing, but it’d have to wait until he’s done with the infrastructure and reconciliation bills.

“We’re going to have to move to the point where we fundamentally alter the filibuster,” Biden told the crowd. Any change to the filibuster would take all Democratic votes in the Senate and Harris’ tie-breaking vote as well. Sens. Joe Manchin (D-W.Va.) and Kyrsten Sinema (D-Ariz.) have been adamant they wouldn’t support changes.

LaTosha Brown, a political strategist and co-founder of Black Voters Matter, a voting rights advocacy group, says the administration has “allowed a lot of goodwill to dissipate” from the Black community because of a perceived lack of movement on key issues.

“We’re not just a tool to participate for them to get power. Our participation is literally driven by our own desire to have power,” Brown said. “So if we’re going to lose power in supporting you, then … what’s the value in that?”

Brown says that building a relationship with the Divine Nine can only aid in gaining some of that trust back because “they’re heavily embedded in our community. They’re the teachers, they’re leaders. That is a very rich and powerful group within our community that carries a tremendous amount of credibility.”

But, added Brown, “Because these are real Black folk that are embedded in our communities, they’re going to expect some real outcomes. The season and the time is over that it’s sufficient to be invited to the White House.”

The Divine Nine also met with both Biden and Harris multiple times during the 2020 election, and Glenda Baskin Glover, the international president of Alpha Kappa Alpha, Inc. (and Harris’ sorority sister), says Biden told them his White House would have some sort of relationship with the organizations. The meeting with Harris helped to jumpstart the concerted effort to strengthen that relationship, Glover and Smith say.

Glover said she told her husband afterward, “I was so impressed, after I said something, the vice president wrote it down.”

The deepening connections with the White House come after the Divine Nine came together to flex their political power in the 2020 campaign in a way not seen in years.The organizations conducted a nationwide voter registration and education drive that kicked into overdrive when Biden put the first member of an NPHC organization on a presidential ticket. Harris’ nomination also unleashed hundreds of thousands of dollars in donations from Black sorority and fraternity alums, with many of Harris’ sorority sisters sending $19.08, a callback to the year AKA was founded.

“It takes away the myth [that] the Divine Nine just steps and strolls and have fun. We do that, but that is small potatoes compared to what the real mission and the real work objective of Divine Nine,” Glover said.