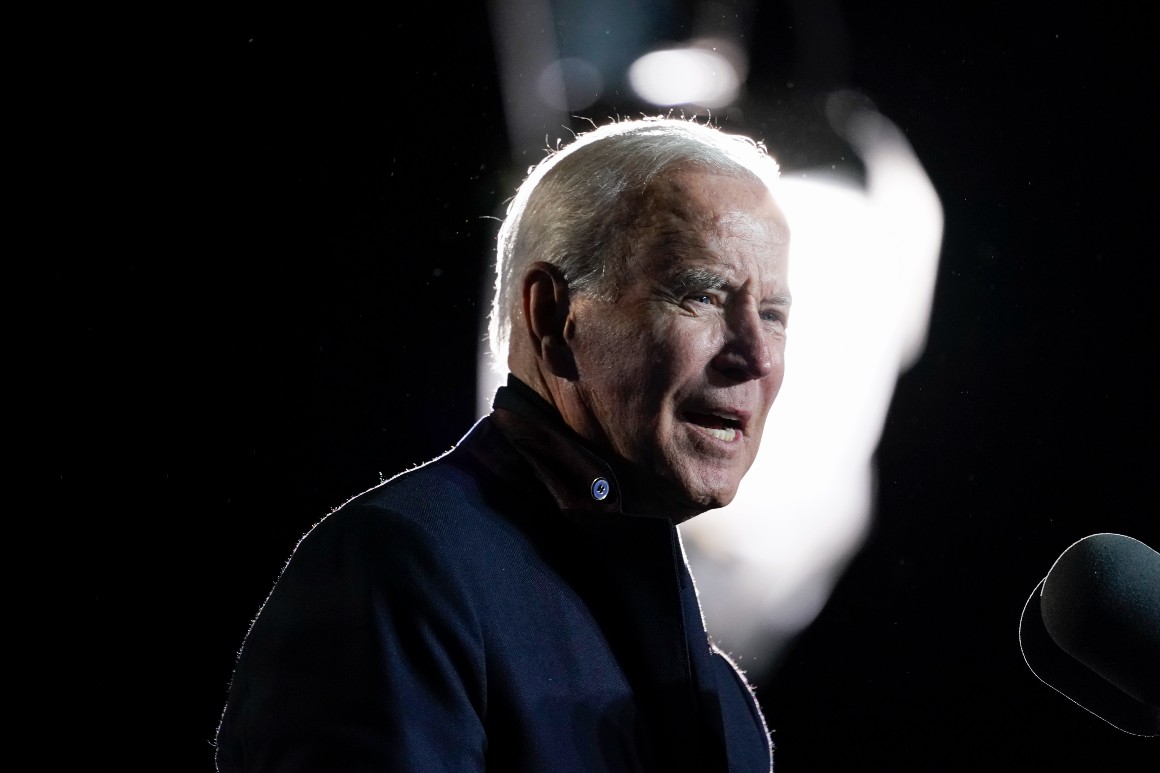 President Joe Biden’s White House outlined a framework for $1.75 trillion in social spending on Thursday morning as Biden prepares to sell a pared-back deal to resistant progressives in a high-stakes appearance on Capitol Hill.

Biden will join House Democrats’ caucus meeting and pitch them on a package of climate, health care and other social policy investments that has yet to win clear liberal buy-in. Also hanging in the balance as Biden makes his move is a $550 billion bipartisan infrastructure bill that’s languished in the House for months.

Even as Biden sandwiched the Hill visit and follow-up White House remarks into an already-packed schedule that includes departing for a major foreign trip, some liberals were digging in. Progressives insisted his bully pulpit wouldn’t be enough to get their votes right away.

“We need to keep the promise that was made. We’ve been very clear. We need to see the two bills simultaneously move together,” Rep. Ilhan Omar (D-Minn.), whip for the Congressional Progressive Caucus, said Thursday morning. Omar added that “the senators need to understand that urgency as well.”

The Biden huddle is a little bit of déjà vu. In many ways Democrats are reliving the nightmarish week in late September when liberal objections forced House leadership to scuttle a vote on the Senate-passed infrastructure bill, enraging the party’s centrists. Biden yielded to progressives’ demands during a visit to the Hill four weeks ago, rather than leaning on his left flank to support the bipartisan bill.

Democrats are hoping Biden arrives in the Capitol Thursday morning with a much more urgent message for liberals, who are once again vowing to block that infrastructure bill if it doesn’t move in tandem with his broader social spending plan.

Top Democrats, including Speaker Nancy Pelosi, had hoped the president’s trip would be a triumphant one after they clinched an agreement on the roughly $1.75 trillion social spending bill with moderate Sens. Joe Manchin (D-W.Va.) and Kyrsten Sinema (D-Ariz.).

“We’re very excited about it. We’re going to send him off to his meetings with strength,” Pelosi said of Biden’s visit as she entered the Capitol. Asked whether progressives were on board, she said, “You’ll have to ask them.”

Biden said as he entered the Capitol that “everyone’s on board” — then jokingly asked another member of Congress if they were on board too.

The White House outlined its parameters for a deal Thursday morning, rolling out a stripped-down topline of $1.75 trillion that includes investments in home care, education and immigration.

The most expensive items in Biden’s proposal are clean energy and climate investments at $555 billion, two years of free pre-school for three and four year olds at $400 billion and $200 billion on tax credits for one year of the Child Tax Credit. The biggest items left out are paid family leave and prescription drug reform. On the latter, a senior administration official made clear there are “not yet enough votes” for it.

Yet Sinema did strike a deal on prescription drug reform, pursuing a more limited approach than most Democrats support. It’s unclear whether that agreement can be added later to the framework, but work is expected to continue on the issue given how many Democrats campaigned on lowering drug prices.

One of the biggest proponents of Medicare expansion and prescription drug reform, Sen. Bernie Sanders (I-Vt.), returned from a meeting with Biden Wednesday evening saying it was “inconceivable” he would agree to a package that was missing those two critical progressive goals — as well as paid leave — all because two centrist holdouts object.

Senior administration officials wouldn’t comment about whether or not key senators had seen this new framework or if they’d agreed to what was actually in the proposal.

“We are not going to speak for any lawmaker here,” one official said. “Our bottom line is, we are confident that this will earn the support of every Democratic senator and pass the House.”

Yet one Democratic source close to progressive lawmakers said Thursday morning that they are concerned Sinema and Manchin still have not yet committed to voting yes. This source added that Sanders has told House progressives that he supported their position to hold off on advancing the infrastructure bill unless it and the social spending bill at the same time through their chamber.

“This is exactly why we need legislative text and all parties fully agreed to that bill text,” the source said, speaking candidly on condition of anonymity.

Still, Democratic leaders including Biden, Pelosi and Senate Majority Leader Chuck Schumer are hoping they can secure a deal this week, paving the way for progressives to support the $550 billion infrastructure bill that cleared the Senate nearly three months ago.

Sanders’ backing will be key to unlocking progressive votes in the House, where Pelosi can only lose three Democrats on any piece of legislation. Senior Democrats hope if the upper chamber’s liberal leader signs onto the plan, his House allies will feel comfortable enough to relent on the infrastructure bill.

But even with a strong push from Biden, it will take some wrangling.

Leaders of the Congressional Progressive Caucus insist that roughly 30 of their members need to see an ironclad commitment that both Manchin and Sinema will vote for the party-line spending plan, along with legislative text at a minimum. A group of roughly 10 to 15 Democrats also say they’ll be satisfied with nothing less than a full House vote on the broader social policy bill, according to multiple sources close to the discussions.

“Right now, there are over three dozen members who feel strongly” about securing more than a framework, said Rep. Pramila Jayapal (D-Wash.), who leads the progressive caucus. “And that number is only increasing.”

Still, senior Democrats are skeptical that dozens of progressives would be willing to block one of Biden’s biggest priorities at a time when he badly needs a win. Anxiety has risen across the party as Biden’s priorities languish in Congress, particularly before a pair of global summits and two key gubernatorial races in Virginia and New Jersey next week.

Even so, liberal backlash could be a problem for House Democratic leaders as they try to tee up an infrastructure vote as soon as Thursday. If the group of roughly 15 liberals does hold out, Democrats would need to make up those defections with GOP votes that are less reliable.

Earlier this summer, House Republicans predicted that more than 20 of their members would easily vote for the infrastructure package, which won approval from 19 GOP senators, including Minority Leader Mitch McConnell. Multiple House Republicans who support the bipartisan infrastructure bill estimate that they are now hovering around 10 GOP votes for the Senate-approved legislation.

Jayapal and her whip team have spent the last several days phoning their members to take their temperatures on the emerging deal. They’ve also made their position clear to the White House, informing staff that they are willing to publicly cheer a deal — even standing side-by-side with Manchin and Sinema, if needed — to lend Biden momentum as he jets off to Europe.

But Jayapal and her allies say at least 30 members of the group are refusing to advance infrastructure unless the broader spending deal moves in tow.

“The speaker knows how to count votes,” said Rep. Ro Khanna (D-Calif.). “I don’t think she’s going to bring it for a vote until she knows she can win it, and she has Pramila and a few others clearly on board.”

And they’re getting support from liberal allies in the Senate.

“A framework is part of getting to a final bill, but I’m not OK with the infrastructure bill being passed out of the House until we actually have a bill in the Senate,” said Sen. Jeff Merkley (D-Ore.).

Burgess Everett and Olivia Beavers contributed to this report.