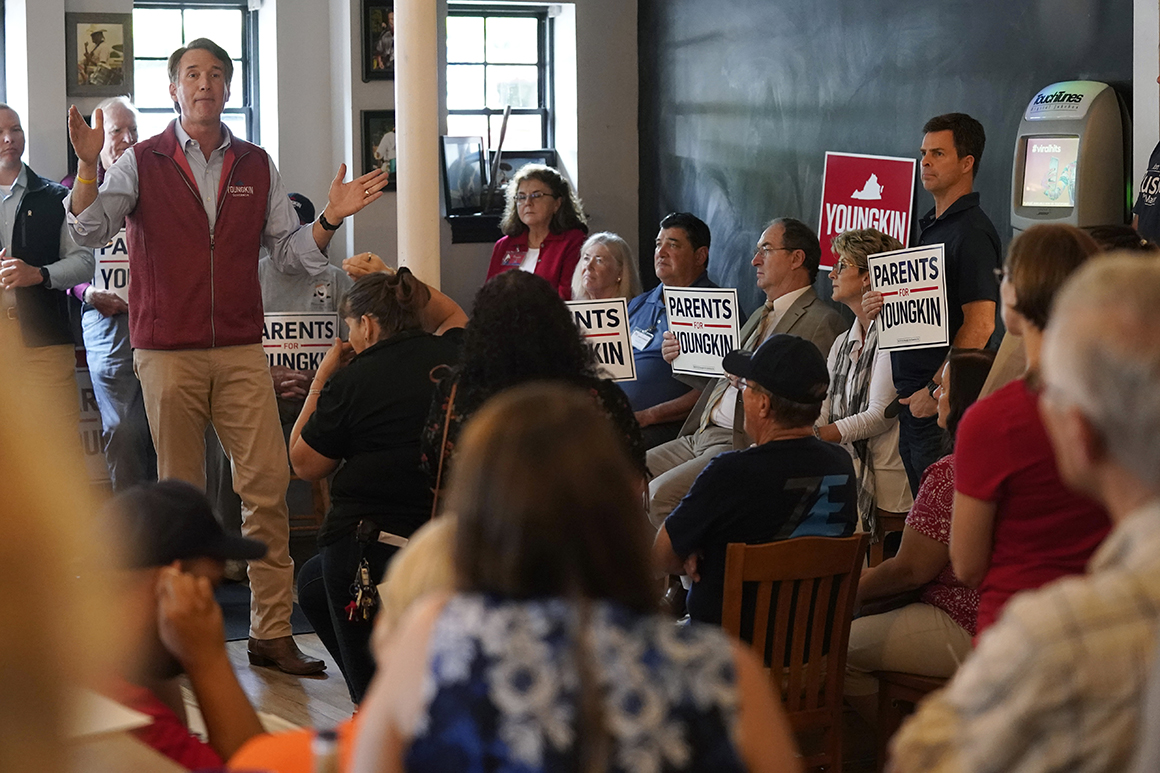 CULPEPER, Va. — Glenn Youngkin is betting on parents’ anger with local school boards to help him edge out a victory in the Virginia governor’s race against Democrat Terry McAuliffe.

And, if it works, it could be a playbook for Republicans to seize on frustrations over Covid school closures — paired with culture war fights over how race is taught in schools and the rights of transgender children — to recapture suburban voters, potentially rocketing fights over education to the top of campaigns across the country.

“When Virginia parents make a statement, that will be heard around the country. It will be heard in every single school district around this great country,” Youngkin said last week while campaigning in Culpeper in part of a series of events he’s dubbed “Parents Rallies.”

The former private equity executive and father of four has blanketed TV airwaves with ads about education and schools. He’s framed the campaign as a fight over the role of government in public school classrooms and the “fundamental right” of parents to be involved in their children’s education.

Republicans hope that Youngkin’s focus on education will ultimately be a blueprint for the midterms. “If it succeeds here, you know every Republican congressional candidate in 2022 is going to pick that sucker up and run with it,” said Ron Wright, a member of the Virginia state GOP’s central committee, in an interview.

Youngkin has been telling voters that he will help lead a national movement to stop progressive education policies and curriculums.

“What we’ve seen over the last 20 months is parents coming together and asking, ‘Please open our schools, five days a week. Stop keeping them closed’,” Youngkin said in Culpeper. “’Tell us what material is being used in the classroom or in the library — just tell us — so that we can choose whether we want it in our kids’ life or not.’”

Most Virginia schools opened this fall for in-person learning after many classrooms were shuttered for more than a year and a half during the pandemic. School boards across the commonwealth have also been a battleground this school year for parents protesting critical race theory and Covid policies, such as mask wearing.

Youngkin has seized on McAuliffe’s comment during their final debate in September over the role that parents should play in schools. “I don’t think parents should be telling schools what they should teach kids,” McAuliffe, a parent of five children, said during the debate, defending his 2016 veto of a bill that would have required schools to warn parents of books with sexually explicit content.

The strategy has put McAuliffe on defense. This week, the former governor rolled out a new TV ad in which he says that Youngkin is “taking my words out of context” and that he’s “always valued the concerns of parents,” while highlighting his previous term in office.

Even still, it is not clear that Youngkin has any sort of material advantage over McAuliffe on education. A recent poll from Fox News, in which McAuliffe led narrowly among likely voters, found that Virginians were basically split on who they trusted more on education: 45 percent said McAuliffe, and 43 percent said Youngkin.

Among self-identified parents who are likely voters, McAuliffe led 53 percent to 43 percent in the Fox News survey. Another recent poll from Monmouth University did, however, find more voters naming education as a top issue compared to past months, and also found the two men trusted about roughly equally on the issue as well — a gain for Youngkin.

“Has it been more politicized recently? Yes,” Keene said in an interview, adding that the increased focus on school board politics is “a good thing because it’s opened up people to be more responsive to their constituents.”

“When that comment was made about parents not having a choice, it galvanized so many other topics,” Keene said. “Do I have a choice whether to send my kid with a mask? Do I have choice, if my kids play sports, do they need to be vaccinated?”

Youngkin’s messaging on education has extended well beyond his “parents first” rallies and has been an almost singular focus of his campaign’s TV ads in the final weeks.

Since the beginning of the month, the most frequently aired TV spot from either candidate across the entire commonwealth has been one from Youngkin attacking McAuliffe’s debate comments about parental involvement in schools, according to data from the ad tracking firm AdImpact.

Outside of his new response ad, McAuliffe’s advertising has been more focused on education messaging recently as well. His second-most aired spot this month attacks Youngkin on education by tying him to Trump and Betsy DeVos, who was Trump’s education secretary, which went on air a week after Youngkin’s. DeVos and her family have donated to Youngkin.

Youngkin recently launched a second ad, in which he speaks direct-to-camera to attack McAuliffe on education and promotes his own plan, which includes increasing teacher pay and expanding charter schools. He says the FBI is “trying to silence parents,” something that he has echoed on the campaign trail.

Youngkin has not offered any evidence for that assertion, and McAuliffe rejects it wholesale. “I never called anybody, requested anything,” McAuliffe told reporters during a press call last week. “I’m not in the business of telling the DOJ what to do or not to do.”

And Democrats in the state brush off Youngkin’s push, saying he is just playing to his base. “I think it’s a non-issue that the other side is using to try to rile people up,” said Anne Holton, who served as McAuliffe’s education secretary during his first tenure and supports his comeback bid.

Holton, who is also married to Sen. Tim Kaine (D-Va.), said there was a “stark difference” between the two candidates, and that divide is a “top issue” to suburban voters, praising the former governor’s plans to spend more money on education.

McAuliffe has also bristled when asked about his opponent’s focus on critical race theory, a once relatively obscure academic legal theory that has been used by conservative activists to encompass broad complaints about teachings in the country’s educational system.

“It’s not taught here in Virginia,” McAuliffe said when asked to define “critical race theory” at a roundtable hosted by a local TV station earlier this month. Rallying against critical race theory is “racist,” he said. “It’s a dog whistle.”

He has also gotten some recent cover from his education allies. The American Federation of Teachers launched a commercial over the weekend that featured parents and teachers praising him and attacking Youngkin, ending with a tag highlighting their endorsement of him. AdImpact tracked at least $615,000 of airtime purchased by AFT to run the ad through next Monday.

McAuliffe, too, has made education part of his closing message. He has also attacked Youngkin over vaccine and mask mandates in schools. Broadly, McAuliffe supports mandates — including vaccine mandates for teachers and eligible students — while Youngkin does not, saying while he believes everyone should get vaccinated it is ultimately a personal decision.

In recent days, Youngkin has also seized on a controversy over Loudoun County officials — in heavily-Democratic Northern Virginia — mishandling allegations that a student sexually assaulted two other students, one after being transferred after the first alleged attack. Conservatives have used the episode to oppose policies that allow transgender students to use the bathroom that corresponds with their gender identity.

At a Tuesday night rally in nearby Fairfax County, Youngkin blamed McAuliffe and George Soros — the billionaire and longtime liberal boogeyman — for the “present chaos in our schools,” and called for an “immediate investigation” into the Loudoun school board for their “gross negligence.”

Youngkin said as governor, he would require every school to have school resource officers, among other proposals, to prevent the alleged assaults from happening again. He did not mention policies on accommodations for transgender students in his speech, but turned to lay out several “principles” on education and launch a broader attack on McAuliffe on education.