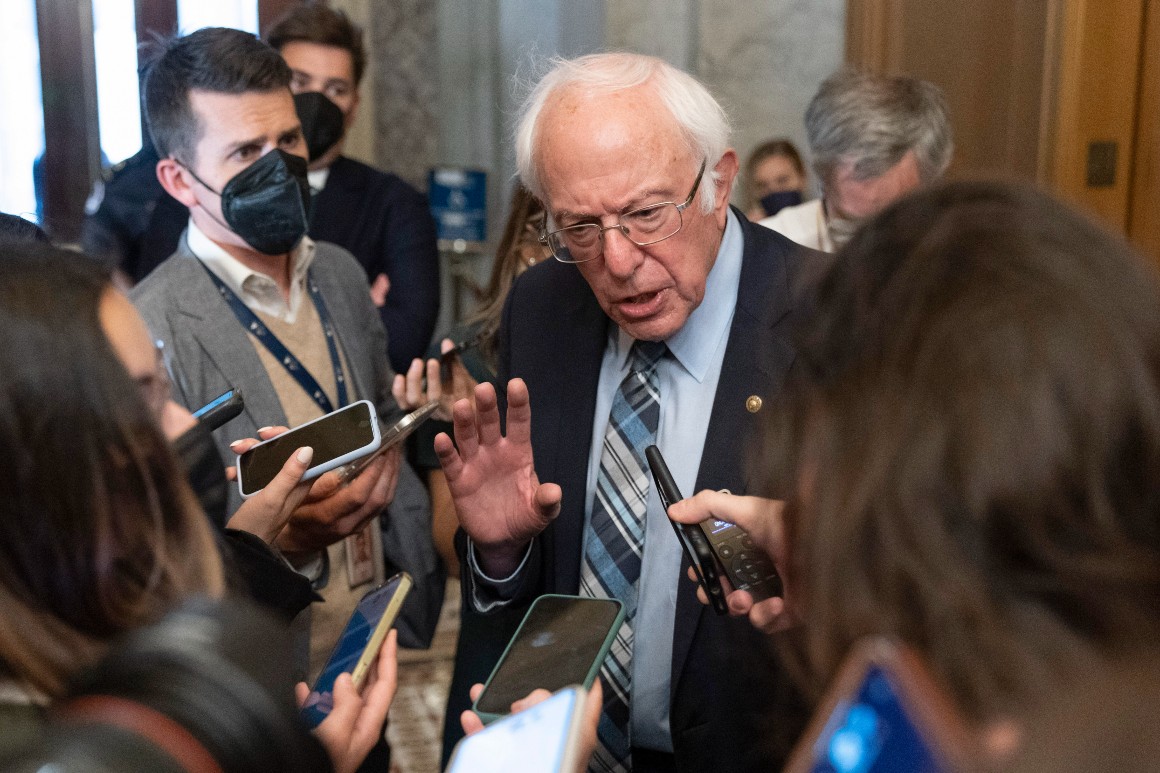 The White House debuted a framework Thursday for the grand social spending deal that has eluded Democrats for months, answering major questions about what survived the carving knife of the party’s centrists.

The outline pegs the final price tag at $1.75 trillion and divulges key details on the majority party’s bid to turn many of President Joe Biden’s campaign-trail promises into law. But the sketch is no substitute for real text of the bill, which is still being finalized. Without that, crucial specifics remain untold and political landmines linger as Democratic leaders pursue the support of every member under the dome.

Senate Budget Chair Bernie Sanders (I-Vt.) said Thursday that Biden’s overall package is “really quite consequential” but that he thinks “it needs to be improved.”

The provisions cut from the package are the main source of discord in the all-out whipping operation to lock in 50 votes in the Senate and nearly every Democrat in the House. The cost of Biden’s spending ambitions shrunk considerably from the $3.5 trillion total Democrats announced in July. Even then, Democrats stressed that the figure required buy-in from the entire caucus — unity the party’s leaders have been chasing for more than three months.

House progressives are demanding to see bill text before backing the spending plan or the separate, Senate-passed infrastructure package the president has tried to move simultaneously in a “two-track” play since the spring.

Here are the plans that made the cut, plus the nagging issues that could still dog Democratic leaders trying to seal the deal:

— What’s in it: $400 billion to subsidize child care for most U.S. families and set up universal Pre-K throughout the country, about $25 billion less than the president included in his initial plan. That’s enough to cover free preschool for all 3- and 4- year-olds in the United States, and help cover child care costs for families making under $300,000.

The White House says that cash will expand child care to cover about 20 million children and ensure most U.S. families pay no more than 7 percent of their income on child care. The program would be funded for six years.

— Potential pitfalls: The plan provides no money for paid family and medical leave, a top priority for progressives but a non-starter for Sen. Joe Manchin. The West Virginia Democrat succeeded in fully killing the idea during endgame negotiations this week.

The framework also leaves out money for overhauling the way the country distributes unemployment insurance, an outmoded patchwork of state systems that has been strained during the pandemic. 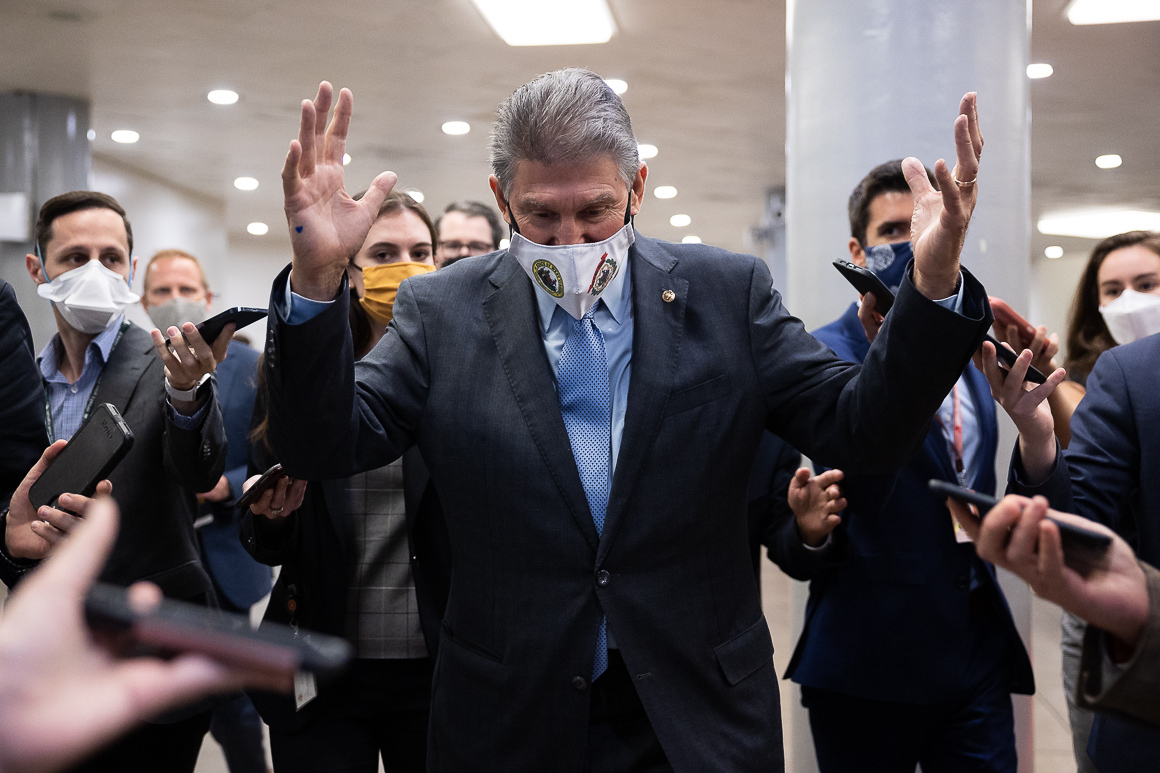 — What’s in it: $35 billion to cover hearing care for older Americans who receive Medicare.

— Potential pitfalls: Sanders has been passionate about expanding Medicare to cover dental, vision and hearing benefits for seniors, signaling that he will accept nothing less. “Keeping teeth in your mouth as you grow old should not be a luxury in this country,” the Vermont Independent tweeted over the weekend.

But paring the proposal back to cover just hearing is a compromise to Manchin, who has raised concerns about keeping Medicare from running out of money in its current state.

— Potential pitfalls: Progressives wanted a much longer or permanent extension of the popular increase this year in the Child Tax Credit, which now provides families with monthly payments, for a total of up to $3,600 per child each year.

Tweaks to the so-called SALT tax deduction were not included in the framework, even though moderates continue to insist on changes to allow taxpayers to write off more of their state and local taxes on their federal filings.

— What’s in it: A plan to lower the cost of prescription drugs isn’t in the framework, but Sen. Kyrsten Sinema (D-Ariz.) and the White House have a deal on a far less expansive proposal than party leaders have been trying to enact.

— Potential pitfalls: The fate of that compromise is still uncertain, and progressives are panning the proposal.

The plan Sinema backs would only allow the government to negotiate some hospital-administered drugs and those with expired patents. Critics say that approach would reward drug companies for gaming the patent system.

House Democrats initially proposed empowering Medicare to bargain down the cost of hundreds of drugs and make those lower prices available to people on private insurance. 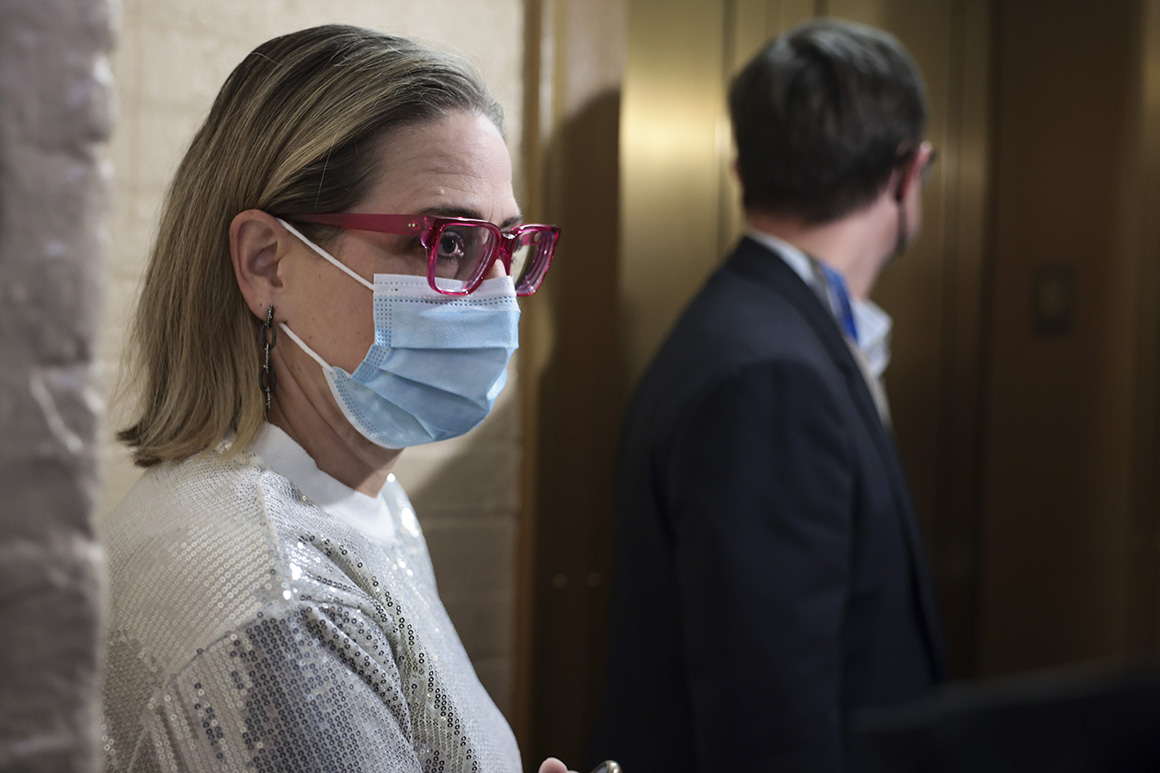 — What’s in it: $40 billion on job training programs, a big cut from the $100 billion the White House first floated.

— Potential pitfalls: Some employment experts warn that $40 billion might not be enough to get U.S. workers into high-demand careers that pay living wages and fill labor shortages.

— What’s in it: Health coverage for an estimated 4 million people stuck in the Medicaid “gap.”

Democrats wanted to ensure that millions of uninsured people in red states that refused to expand Medicaid under Obamacare got coverage. But Manchin objected, arguing that it wouldn’t be fair for the federal government to foot the full bill for 12 holdout states. Instead, Democrats settled on a workaround plan to offer a few years of subsidized private insurance to low-income, uninsured people in those states.

— Potential pitfalls: It’s unclear if progressives will accept the final language, amid liberal criticism that it’s an overly expensive solution that subsidizes private insurance rather than creating a new federal program.

— What’s in it: $100 billion to “reform our broken immigration system.” The administration said it wants to reduce backlogs, expand legal representation for immigrants and make “the asylum system and border processing more efficient and humane.”

— Potential pitfalls: The money included in the White House framework doesn’t count toward the overall $1.75 billion total, signaling that its inclusion isn’t a done deal. The entire plan must also get approval from the Senate parliamentarian, and immigration policy can be especially tricky to pass under the special budget process Democrats are using to advance the package without Republican votes.

— What’s in it: Health care subsidies that are set to expire in 2022 would run through 2025 under the package, continuing tax credits to help people cover the cost of their health insurance premiums.

— Potential pitfalls: While the White House calls the plan “the biggest expansion of affordable health care coverage in a decade,” the proposal has one major weakness: it’s not forever. Majority party leaders wanted to make the more generous Obamacare subsidies permanent, since Republicans are unlikely to extend them if they win back control of Congress or the White House.

— What’s in it: $150 billion for housing programs, including for the construction and rehabilitation of up to 1 million new affordable rental and single-family homes. The money would also go to public housing, rental assistance and aid to help people cover the down payment to purchase a home.

— Potential pitfalls: Progressives have repeatedly pushed the White House and congressional leaders to retain as much as possible of the $327 billion in housing funding House Democrats approved last month. Speaker Nancy Pelosi was still pushing last week for $175 billion. But Democrats are likely to accept the smaller pot of money, with their focus on other spending battles.

The funding might also fall short of what is needed to execute Democrats’ plan to build and rehabilitate 1 million homes.

— What’s in it: $150 billion to support in-home care for older people and those with disabilities. That money is supposed to permanently boost Medicaid coverage for those services, help reduce the list of more than 800,000 people waiting for support and raise the pay of the industry’s workers.

— Potential pitfalls: While the Biden administration touts the plan as “the most transformative investment in access to home care in 40 years,” the sum is far short of the $400 billion the president first pitched. Spending $150 billion is unlikely to be enough to both clear the waitlist or raise wages for home care workers.

— What’s in it: An extra 5 percent tax on individual income above $10 million, with an additional 3 percent tacked on above $25 million. The administration also wants to beef up IRS enforcement to crack down on wealthy tax evaders, in addition to imposing a 1 percent tax on stock buybacks and a 15 percent minimum tax on corporations that report at least $1 billion in profits to their shareholders.

— Potential pitfalls: Democrats have struggled to unify on tax hikes and ways to drum up money to pay for Biden’s plans. Progressives want to aggressively tax the wealthy, while some Democrats say they don’t want to rush to create a whole new tax on the yearly change in the value of a multimillionaire’s assets, like real estate holdings, stocks and art.

The White House estimates that all of the funding offsets will generate a total of nearly $2 trillion, which would fully pay for the plan, as promised, and reduce the deficit. But that’s a tall order that lacks an official estimate from nonpartisan analysts at the Congressional Budget Office. Some Democrats, for example, have expressed skepticism that IRS enforcement will generate the savings the administration promises.

— What’s in it: A $550 boost to the maximum amount a student can receive each year through the Pell grant program.

That would be on top of the maximum yearly Pell grant of about $6,500 that helps cover higher education costs for students with lower incomes. The plan would also allow immigrants who were brought to the United States as children to qualify for that aid.

More than 5 million U.S. students currently receive Pell grants, which go to families with incomes of $50,000 a year or less.

— What’s in it: $555 billion for a slew of programs the White House says will reduce greenhouse gas emissions by over one billion metric tons in 2030.

That includes $320 billion to extend and expand renewable energy tax credits designed to speed the rollout of wind and solar power for both utilities and homeowners. Consumers would get up to $12,500 in credits for buying electric vehicles made in union shops, a nod toward labor that has drawn criticism from automakers like Toyota and Tesla, whose workers are not unionized.

Through a $105 billion pot of money, the U.S. would invest in infrastructure that is more resilient to natural disasters and kick in cash for products like cleaner transit buses and trucks.

With that money, the federal government would also stand up a Civilian Climate Corps, putting to work about 300,000 people to do things like plant trees and clean up waterways. Another $110 billion would be spent to encourage leaps in developing clean energy technology to boost the U.S. production of sources like batteries and solar.

— Potential pitfalls: The White House framework does not mention a methane fee, a top priority for progressive Democrats and one of the last energy policies still being negotiated in the package. But Democrats later signaled inclusion of that policy, which would force oil and natural gas producers to pay up to $1,500 for each metric ton of methane they emit above a certain bar.

— What’s in it: Child nutrition assistance to offer free school meals to almost 9 million more students. It would also provide a $65-per-child benefit each month to help the families buy groceries during the summer months when school is closed. About 29 million children are now covered under that Summer EBT program.

— Potential pitfalls: The summer meals subsidy is substantially less than what anti-hunger and education advocates had hoped. Last summer’s EBT program, which the Biden administration extended, gave families $375 to help replace school meals for the summer months, which is roughly double what the compromise at hand would provide.