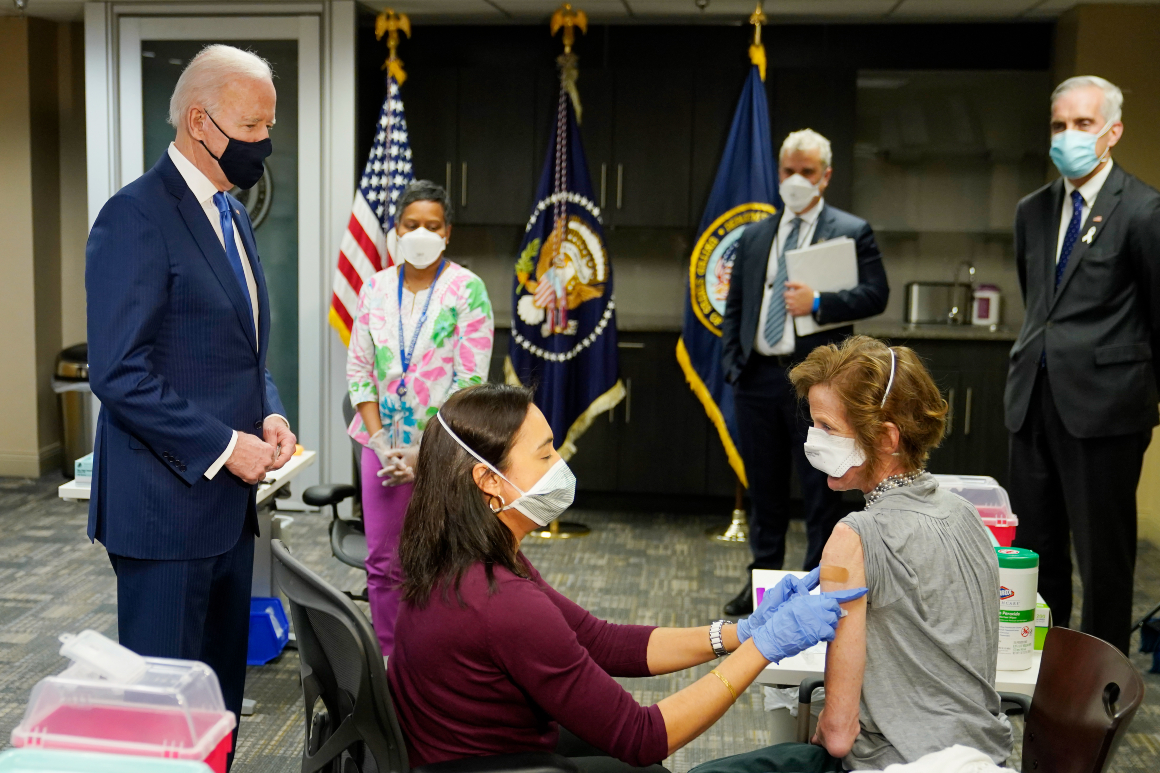 President Joe Biden vowed this fall to make a sizable dent in the unvaccinated population by mandating that federal employees receive the Covid-19 vaccination.

One month after the first agency hit its deadline for workforce vaccination, it’s made major strides but tens of thousands of employees have yet to comply.

In late July, Veterans Affairs Secretary Denis McDonough initiated the federal government’s first mandate, one that ultimately required the department’s 380,000 health care workers to show proof of vaccination by Oct. 8 or face counseling and, then, termination. The department reported 70 percent initial compliance with the vaccine mandate. A week later, that figure was 80 percent, after more employees who already were vaccinated reported their status, a VA official told POLITICO.

A month after the initial deadline to show proof of vaccination, the VA now says that 90 percent of all of its 422,000 workers have either uploaded their validation or sought a religious or health exemption, according to numbers provided to POLITICO. Officials did not break down the numbers in each category, making it impossible to know what precise percentage remain unvaccinated on the job. Nor did it specify the percentage of the 380,000 health care-specific workers — who staff facilities tasked with caring for the nation’s veterans — had complied. A spokesperson said the department expected a “more concrete account of those numbers in the coming days leading into the monthly press conference.”

The persistence of a (at least) 10 percent unvaccinated pool of VA workers represents a narrow but troubling gap that has been seen after similar vaccine mandates were instituted for government contractors and large private businesses. And it once more shows how data on vaccine mandate compliance has become a Rorschach test for the Covid fight.

Public health advocates and administration allies see proof that those mandates work, noting that workforces are overwhelmingly in compliance. But business interests and some unions have argued that there are major downsides to punishing vaccine holdouts, even if they comprise a small portion of the workforce, arguing that it could disrupt critical services, make it even harder to find workers in a tight labor market and upend government functions.

Legal challenges abound, as do requests for deadline extensions and exemptions, all of which could significantly slow down vaccination progress. The mandates that Biden set into effect in September encompass government workers, federal contractors and private businesses employing more than 100 workers. A raft of lawsuits filed on behalf of federal employees, states and private businesses emerged in recent weeks, arguing that the mandates are an overreach by the federal government, one that could set bad precedent or violate constitutional protections around freedom of speech and religion. The suits have also challenged the private business mandate, which was dictated by a new rule set by the Occupational Safety and Health Administration calling for employees at large businesses to be vaccinated or tested weekly.

An appeals court on Saturday temporarily halted the mandate for private businesses, with Republican appointed judges issuing the verdict. And John Vecchione, lead attorney for the New Civil Liberties Alliance, argued that court challenges like these are enough to muck up expediency of the mandates. Vecchione’s group is seeking a class action designation for federal employees who say they should be able to opt out of the mandate if they’ve already had Covid before, and can prove some level of immunity through antigen tests. 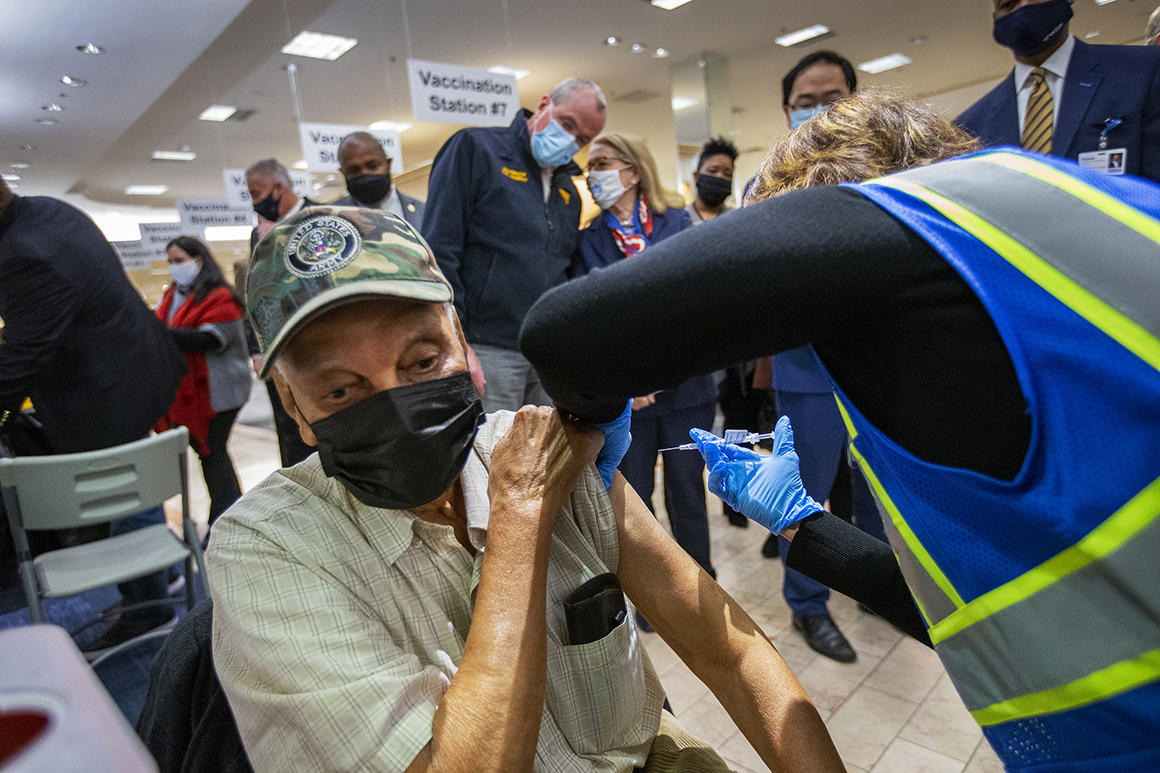 “The government’s gonna have to litigate on several fronts,” said Vecchione, who added that the class could potentially grow to millions of workers. “Each of these is a huge step for the federal government to do and if they win on this, what medical procedure can the federal government not require of every employee in America just because they say so? That’s really the danger here.”

For the administration, there are logistical hurdles to grapple with as it goes about trying to implement the vaccine requirement. Beyond the VA, individual departments are experiencing internal resistance to the mandate. In addition to the court challenges, the administration also faces thousands of petitions for exemptions from its own workers. Some federal contractors have threatened to end their business with the administration over the mandate.

Last week, the administration extended the deadline for federal contractors to comply with the mandate, from Dec. 8 to Jan. 4 — an implicit nod to concerns that it could be disruptive during the holiday season. But that’s only further complicated the situation with federal employees. The American Federation of Government Employees, the largest union representing federal employees, on Tuesday demanded parity.

“It is inexcusable that contractors are being given the entire holiday season to meet the mandates, while federal employees continue to be subject to the November 22 deadline. The effect upon morale of federal employees being subject to possible discipline at this time of the year cannot be overstated,” AFGE National President Everett Kelley wrote in a letter sent to the administration.

As it’s faced pushback over the mandates, Biden administration officials have stressed that delays in instituting them could cost lives. They’ve also argued that the real disruption to workforces and the economy has been the pandemic and not the vaccination campaign designed to get it under control.

Perhaps nowhere is the risk more acute than at the VA, the country’s largest integrated health care system, where the mandate was first instituted and where the impacts of the pandemic were quite severe.

At the time McDonough issued the edict, the Delta variant was rapidly spreading across the country and infections had more than doubled within a month at VA facilities. McDonough argued it was imperative that the agency, which operates 1,200 medical facilities nationwide, required the vaccine of its own frontline health workers — from doctors to dentists to registered nurses — who had daily contact with veterans who were now patients.

“Whenever a Veteran or VA employee sets foot in a VA facility, they deserve to know that we have done everything in our power to protect them from COVID-19,” McDonough said at the time.

POLITICO reported in August that at least nearly 1,400 VA residents had died of coronavirus in 110 state veterans homes. The VA said that 200 of its own employees overall have died since the start of the pandemic.

McDonough has said that direct contact with the public is the driving force behind instituting the vaccine requirement and following that requirement up with actual enforcement.

The department already launched what McDonough called a “progressive” disciplinary process that begins with supervisors reaching out to those employees who remain unvaccinated, laying out the reasons behind the mandate and the repercussions if they don’t comply.

“If they choose not to do it, and after our disciplinary process, continue to not do it, they’ll be fired,” McDonough said in a news conference last month. He noted that there could be cases where he is forced to deny requests for religious exemptions.

That timeline could be similarly complicated for outside contractors and private businesses pushing back against the requirements, who are not just dealing with staff resistance but also navigating shifting legal ground regarding the enforceability of the mandate.

“The question that we’re trying to answer is whether the federal government has the power that it claims it has to force private employers … to make this health care decision for them,” said Ryan Bangert, senior counsel for the Alliance Defending Freedom, a Christian legal not-for-profit group that is challenging the OSHA rule. “We’re talking about stepping on constitutional rights.”