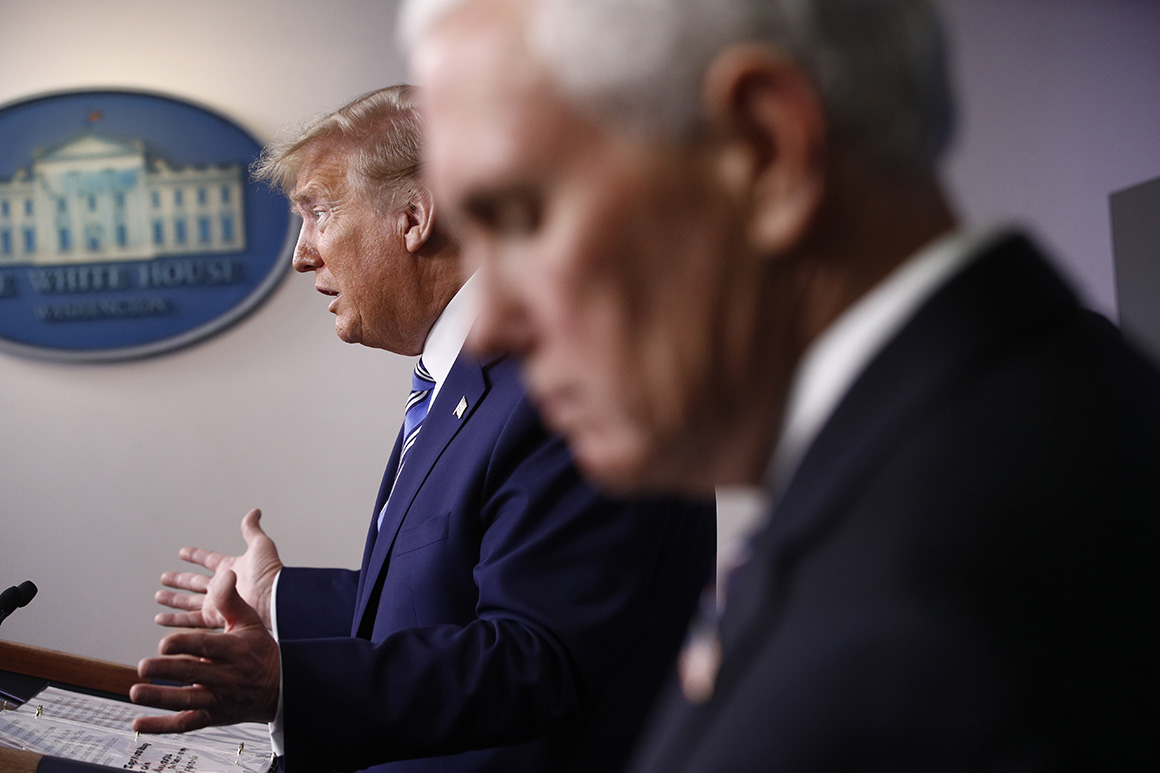 Could former President Donald Trump be charged with a crime for urging then-Vice President Mike Pence not to certify the electoral vote tally?

That appeared to be the thrust of a question U.S. District Court Judge Carl Nichols posed on Monday at a court hearing for one of the hundreds of Americans charged in the Capitol riot.

The judge and both sides in the case found themselves debating the scope of a law being wielded against many Jan. 6 defendants that makes it a felony to “corruptly” interfere with an official federal government proceeding and carries a penalty of up to 20 years in prison.

The statute is typically applied to court-related conduct, like threatening judges, jurors or witnesses. However, prosecutors have leveled the obstruction charge against about a third of the roughly 700 Jan. 6 defendants over their alleged efforts to disrupt the electoral vote tally that Congress was undertaking when a crowd loyal to Trump broke through police lines and forced their way into the Capitol.

At a hearing on Monday for defendant Garret Miller of Richardson, Texas, Nichols made the first move toward a Trump analogy by asking a prosecutor whether the obstruction statute could have been violated by someone who simply “called Vice President Pence to seek to have him adjudge the certification in a particular way.” The judge also asked the prosecutor to assume the person trying to persuade Pence had the “appropriate mens rea,” or guilty mind, to be responsible for a crime.

Nichols made no specific mention of Trump, who appointed him to the bench, but the then-president was publicly and privately pressuring Pence in the days before the fateful Jan. 6 tally to decline to certify Joe Biden’s victory. Trump also enlisted other allies, including attorney John Eastman, to lean on Pence.

An attorney with the Justice Department Criminal Division, James Pearce, initially seemed to dismiss the idea that merely lobbying Pence to refuse to recognize the electoral result would amount to the crime of obstructing or attempting to obstruct an official proceeding.

“I don’t see how that gets you that,” Pearce told the judge.

However, Pearce quickly added that it might well be a crime if the person reaching out to Pence knew the vice president had an obligation under the Constitution to recognize the result.

“If that person does that knowing it is not an available argument [and is] asking the vice president to do something the individual knows is wrongful … one of the definitions of ‘corruptly’ is trying to get someone to violate a legal duty,” Pearce said.

Later in the hearing, Miller’s defense attorney, Clinton Broden, returned to the issue, arguing that the example the judge raised showed the problem with reading the obstruction statute to cover almost any kind of effort to delay almost anything a federal government official or body was planning to do.

While the judge and the prosecutor managed to discuss the subject without mentioning Trump explicitly, the defense attorney was more blunt.

“That troubles me if that’s really the government’s position, that if former President Trump tried to convince Vice President Pence not to certify the election, if there’s evidence that he didn’t really believe Vice President Pence had that power,” that could be a violation of the obstruction law, Broden said. “That seems like the rabbit trail we’re going to go down under the government’s reading of the statute.”

Trump has maintained publicly that he believed and still believes that Pence had the power to refuse to recognize the electoral votes submitted by state officials and could have refused to do so, potentially throwing the presidential election into the House of Representatives to be decided.

Eastman, a conservative law professor and former Justice Department official, prepared legal opinions making those arguments. However, most other lawyers of various political persuasions have ridiculed that claim. Pence and his aides concluded that he had no such discretion in the process and that it would be dangerous if he did.

The in-court discussion of Trump’s potential criminal culpability in the Capitol riot raised a nagging and uncomfortable question for the Justice Department: whether it is making a serious effort to investigate whether the former president committed any crimes in connection with the events of Jan. 6.

Internal Justice Department emails released last week in response to a Freedom of Information Act request brought by BuzzFeed showed officials trying to address that delicate issue in the hours and days immediately after Jan. 6.

“We’re looking at all actors here, and anyone that had a role, and if the evidence fits the elements of a crime, they’re going to be charged,” acting U.S. Attorney Michael Sherwin told reporters on a conference call the day after the riot.

Despite that pledge, there have been no outward signs over the past 10 months that the Justice Department is actively investigating Trump or the people closest to him over their activities in the lead-up to or during the riot. Sherwin left the department in March, following criticism from judges about some of his comments to the media.

Miller is charged with a series of offenses, including obstruction, assaulting a federal officer and making threats against a police officer and Rep. Alexandria Ocasio-Cortez (D-N.Y.). Prosecutors say that in the wake of the takeover of the Capitol on Jan. 6, Miller posted a series of calls for violence on social media. After Ocasio-Cortez urged Trump’s impeachment on Twitter, Miller allegedly replied: “Assassinate AOC.”

Miller is just one of more than half a dozen Capitol riot defendants currently challenging the use of the obstruction charge in their cases.

Broden, the defense attorney, said on Monday that the government’s interpretation was so broad that disrupting almost any activity a judge is doing could amount to obstruction and carry — at least, theoretically — a 20-year prison term.

“There’s got to be a limit. If somebody comes in as the court is performing a wedding, is that an official proceeding?” Broden asked, urging the court to give the defendant the benefit of any doubt under a legal doctrine known as the rule of “lenity.”

Nichols did not rule on the issue on Monday, nor offer any clear indication of where he’s likely to come out on the question, which is also being mulled by other judges.

The prosecution and defense in Miller’s case also argued on Monday about claims that Jan. 6 defendants are being treated unduly harshly for political reasons, especially when compared to people arrested over actions taken during civil unrest last year in Portland, Ore.

“The Portland rioters engaged in a lot more assaultive conduct than Mr. Miller is accused of engaging in,” Broden said. “I think it is a concern … to a large segment of the public.”

But an attorney with the Justice Department’s Criminal Division, David Lieberman, said prosecutors had good reason to distinguish between the cases, including the gravity of the Capitol attack and the fact that the evidence against many of those charged in Portland was not as good as that available for the Capitol cases.

“You had officers at 2 a.m. in the morning in full tactical gear trying to identify a person in the crowd” in Portland, Lieberman said.

Broden said on Monday that Miller planned to reject the government’s proposal that he resolve the case by pleading guilty to the obstruction charge and a charge of assaulting a federal officer. Prosecutors do not appear to have insisted that Miller plead guilty to the alleged threat against Ocasio-Cortez.

Toward the end of the nearly two-hour court hearing on Monday, Nichols heard arguments in secret about whether Miller should be released from pretrial detention. The judge did not say why the public was excluded from that portion of the session.

No trial date has been set in the case, but Nichols set another hearing for Dec. 21. He also said he was concerned that Miller and the relatively small fraction of Jan. 6 defendants who are in pretrial detention are under “a lot of pressure” because of delays brought on by the pandemic and the huge caseload surge due to the Capitol riot.

“I think we need to continue to move this case as quickly as possible,” the judge said.

Kyle Cheney contributed to this report.