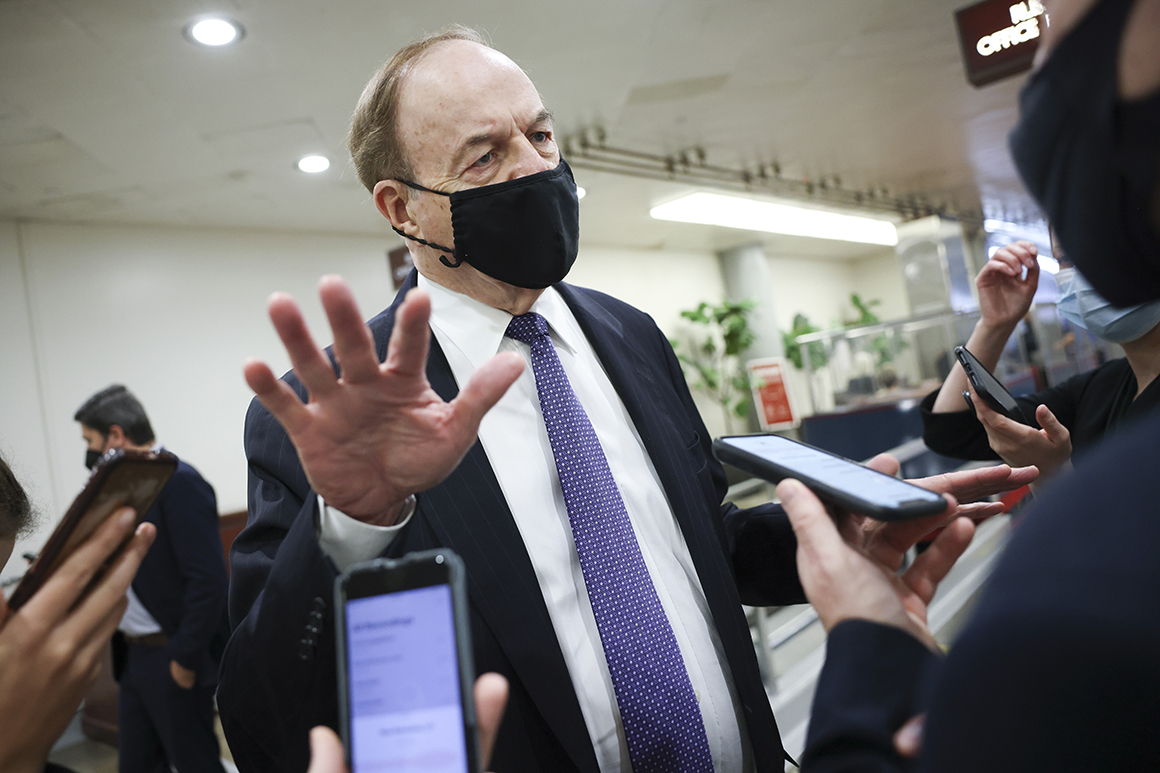 Government funding expires in one month, and bickering top lawmakers are already forecasting another autopilot spending bill to prevent a December shutdown.

Democrats and Republicans can’t even agree on how to begin negotiations.

“We’re at a standstill,” Sen. Richard Shelby (R-Ala.) said as he exited a meeting Tuesday between the two Senate appropriations leaders and their two House counterparts. It was the first “four corners” meeting of the fiscal year.

“Then make an offer!” Senate Appropriations Chair Patrick Leahy (D-Vt.) retorted about his Republican counterpart’s grievances with the funding plans Democrats have offered.

The next shutdown threat hits at midnight on Dec. 3, when federal cash stops flowing from the temporary spending patch Congress enacted to keep the government funded after the new fiscal year started on Oct. 1. Another debt cliff is also expected as soon as next month, since the Treasury Department already exhausted the $480 billion in extra borrowing power Congress granted three weeks ago.

While the pressure is on to clinch deals on funding the government and addressing the debt limit before early December, the energy in Congress is sapped by bigger spending fights as Democrats labor to pass President Joe Biden’s social policy package and the bipartisan infrastructure bill.

Shelby predicted Congress is headed for another stopgap spending patch come Dec. 3 and probably another once that one expires. Leahy said that fate would be the minority party’s doing.

House Majority Leader Steny Hoyer said Tuesday that Democrats must finish work on Biden’s $1.75 trillion social spending package and the Senate-passed infrastructure bill before the party can devote its attention to annual government funding or act on the debt limit, to ensure the Treasury Department can continue to pay the government’s bills.

Democrats still say they aren’t planning to lift the debt ceiling by using the reconciliation process — the only way they could remedy the issue without GOP votes in the Senate. “I don’t think it’s on the table,” Hoyer said. “Whether it’s completely off the table, my view is, we need to deal with the debt limit. … And we should be dealing with the debt limit in a bipartisan way.”

The nation could hit that borrowing limit as early as Dec. 3, or Treasury could muddle through for several more weeks or months depending on federal cash flow. The Bipartisan Policy Center, which consistently forecasts the debt limit’s brink with accuracy, predicted last week that the Treasury Department would fully exhaust its borrowing ability sometime between mid-December and mid-February.

Hoyer told reporters on Tuesday that both the debt limit and averting a government shutdown are “very pressing.” But he said Democrats need to get their infrastructure and social spending bills done before “we can give full time and attention to those two critical issues.”

Not all Democrats are buying that justification for delay.

Sen. Jon Tester (D-Mont.), who chairs the spending panel that funds the Department of Defense, said Tuesday that “we make up excuses around here that we don’t need to make up.”

“I think we can walk and chew gum at the same time — truthfully,” he said. “There should be a motto around here: ‘Why do today what we can do tomorrow?’ It’s ridiculous. It isn’t just because of this Congress. It has been that way for several Congresses.”

The way to jump start a final agreement to fund the government, Tester said, is to strike a compromise on the two totals for defense and non-defense spending.

Delaying a final funding agreement is undermining the U.S. national defense, Tester warned, pointing to “challenges” with China and Russia.

On the other side of the aisle, Republican appropriators are also rooting for top party leaders to agree on overarching funding totals. Sen. Susan Collins (R-Maine), who is expected to become her party’s chief appropriator when Shelby retires next year, said the discrepancy between the 13 percent increase Democrats are proposing for non-defense programs and the 5 percent boost for defense “absolutely has to be resolved” at the outset.

“First of all, we have to have a higher topline for defense spending,” said Collins, the top Republican on the spending panel that funds the Department of Transportation, as well as Housing and Urban Development.

Collins noted that the House easily passed a defense policy bill in September that endorsed a more than $25 billion increase in military funding over Biden’s budget request.

“The House has been taking steps in that direction,” she said. “So to me, that’s the biggest issue for us to remedy.”

But Democrats are still consumed with finalizing Biden’s two biggest legislative priorities, which have already sucked up the calendar for months. Congressional leaders are pushing for a House vote on the infrastructure package this week after two failed attempts, while ironing out major outstanding obstacles to party unity on Biden’s social spending measure, including plans to lower prescription drug costs.

With breaks scheduled in both chambers ahead of Thanksgiving, time is running short to sew up congressional work on the cornerstone bills of Biden’s agenda, let alone pass a slate of bipartisan appropriations bills before the early December deadline.

Shelby said Tuesday that Democrats will first need to agree to kill liberal policy priorities in their government funding bills if they want to begin serious talks toward a final deal. That includes continuing the Hyde amendment ban on federal funding for abortion.

“We’d like to work to ‘yes,’ but not at any cost,” Shelby said. “We want to knock off the table all their social issues that they put in. … Otherwise, the bill will never move off the floor.”