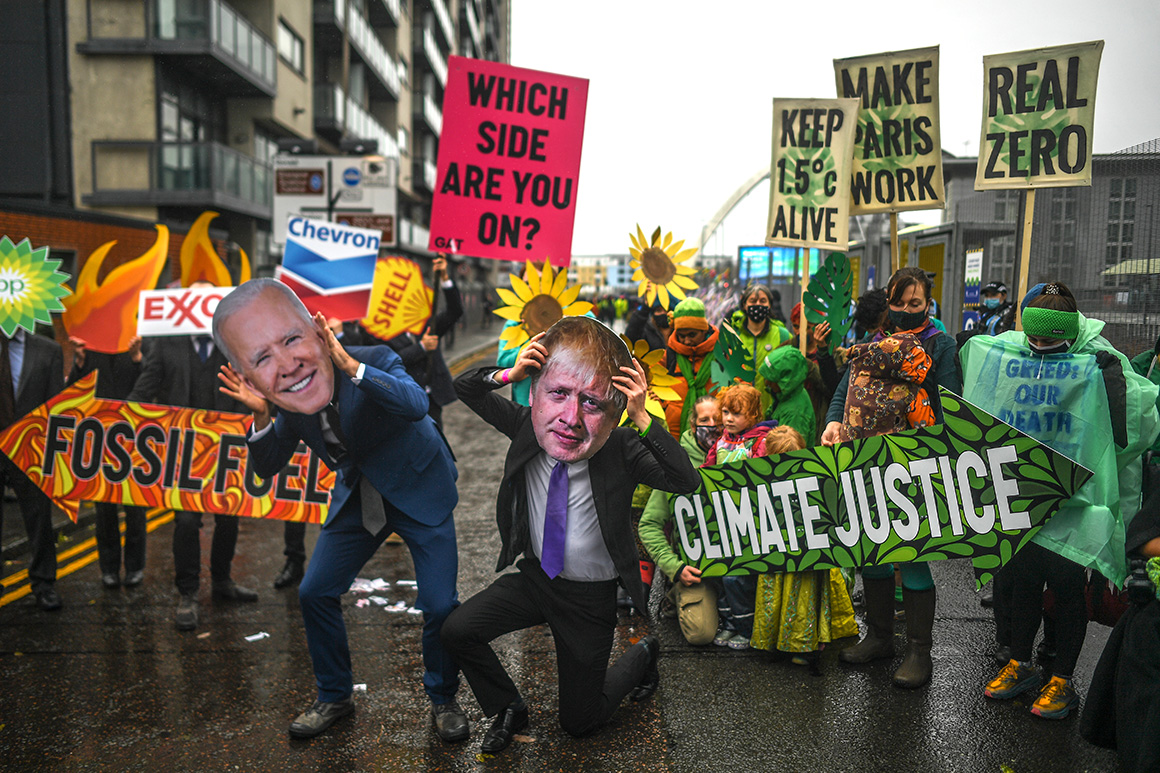 GLASGOW, Scotland — Climate talks finished Saturday with a familiar outcome — the collective march toward action to tackle global warming is gaining momentum, but still falls short of what’s needed to avert a crisis.

“The approved texts are a compromise. They reflect the interests, the conditions, the contradictions and the state of political will in the world today,” U.N. Secretary-General António Guterres said in a statement. “They take important steps, but unfortunately the collective political will was not enough to overcome some deep contradictions.”

That duality was on full display in the final moments of the two-week conference that transformed Glasgow into the hub of global climate politics.

“Not everyone gets to make choices that actually affect an entire planet. We are privileged today to do exactly that,” said United States Special Climate Envoy John Kerry.

“It will be too late for the Maldives,” Aminath Shauna, environment minister of the Maldives, said immediately after Kerry spoke, adding: “What is balanced and pragmatic to other parties will not help the Maldives adapt in time.” 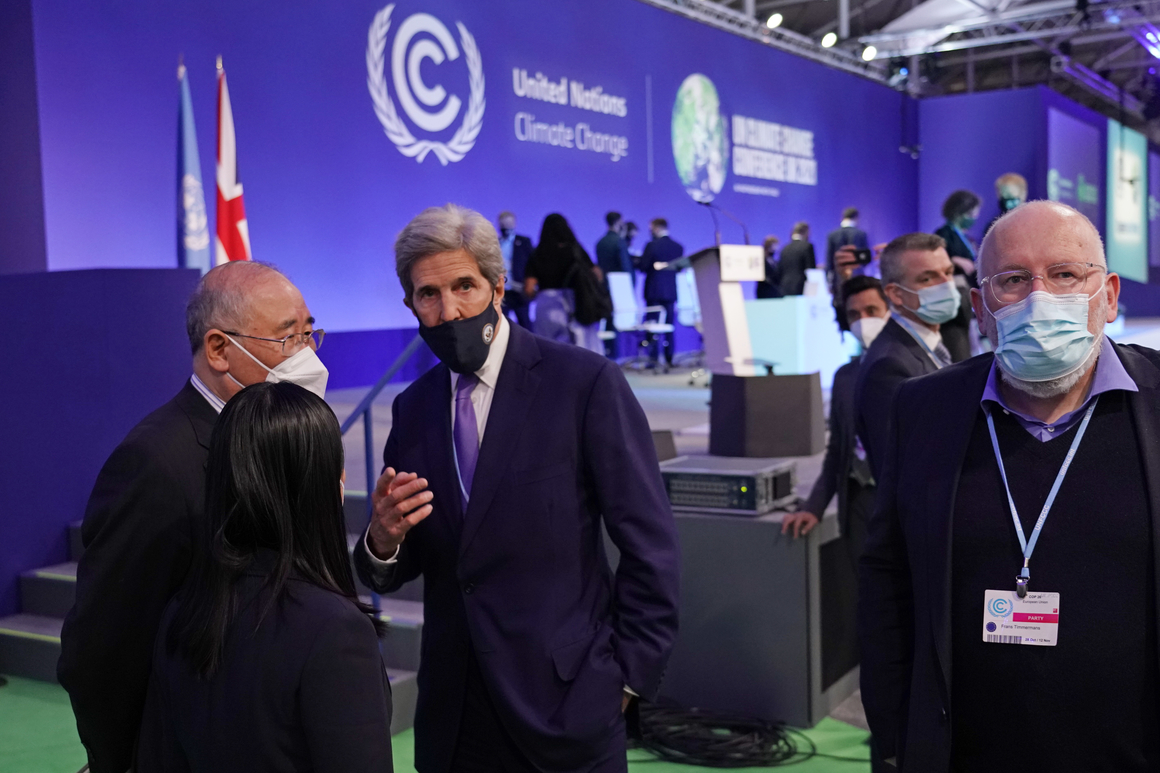 The deal prodded high-emitting nations like China to return next year to reassess how quickly they can draw down greenhouse gases to maintain a livable planet. Nations moved closer to formally recognizing the endgame is limiting global temperature rise to 1.5 degrees Celsius above pre-industrial levels. That goal aligns with recent science and is tougher than the “well below 2 degrees” goal that 197 countries agreed to when they signed the 2015 Paris climate agreement.

“The difference between 1.5 and 2 degrees is a death sentence for us,” said Shauna.

The half-empty, half-full dynamic continued down the list of the COP26 final agreement.

Demands from the poorest and most vulnerable countries for a specific fund to compensate them for disasters already being wrought by climate change were shot down by the U.S. and the EU. However, vulnerable countries did win promises for further talks on a taboo issue that Washington had previously refused to even discuss.

Poorer countries also secured clear commitments from wealthy countries to increase other financial flows for what is known as adaptation and mitigation — building protective infrastructure or greening their energy systems. Rich countries promised to provide $100 billion a year in climate finance by 2020, but they’re well short of that mark. However, in Glasgow, developed nations promised to double adaptation finance by 2025. They also agreed to set a new goal for finance by 2024, replacing the $100 billion annual commitment.

That was not as much as vulnerable countries would like, as they already face adaptation costs of $70 billion a year, but sums that were unimaginable a few years ago.

The negotiations, which were supposed to end on Friday evening, dragged into Saturday when a meeting designed to close the talks plunged into a floor fight over rules being drawn up for carbon markets — something that’s been unresolved in the six years since the Paris deal was signed.

The deal agreed Saturday will guide the trading of carbon credits between countries. It included concessions to Brazil and other nations arguing for loopholes. Those had been resisted for years by countries concerned that doing so would open the door to massive double-counting of emissions cuts. Developing countries — including China — also won concessions on how much they will have to publicly reveal about their efforts on cutting emissions.

In a historic first, the conference recognized the need to “phase down” unabated coal power and phase out “inefficient” fossil fuel subsidies. The language on coal was a coup for the British presidency, which had said it wanted the conference to consign coal to history. The words “coal” and “fossil fuels” have never been mentioned in a U.N. climate agreement, although the deal didn’t mention a timeline for either commitment.

Many of the world’s most vulnerable countries lamented that India and China won a last-minute concession from the European Union and the U.S., made behind closed doors, to change the coal language from “phase out” to “phase down.”

“The commitment on coal has been one of the bright spots in this package,” said Tina Stege, climate envoy from the Marshall Islands. “It hurts deeply to see that bright spot dim.”

As he brought down the gavel on the deal, COP26 President Alok Sharma — who had made killing coal his personal mission — broke down in tears, saying he was “deeply sorry” the deal had been amended in that way.

Many exhausted negotiators and ministers on Saturday said the Glasgow conference had not delivered enough. Mohamed Adow, director of the Power Shift Africa think tank, said: “This summit has been a triumph of diplomacy over real substance. The outcome here reflects a COP held in the rich world and the outcome contains the priorities of the rich world.” But the hope is that it at least will give a fighting chance of sparing the world the worst consequence of global warming.

“These outcomes constitute an incredibly delicate balance. There is a fine and fragile green thread which is weaved around this balanced package,” said Sharma.

Sharma also said: “The world is willing us on to be bold,” but that boldness was something that climate negotiators and national leaders made certain to calm ahead of the conference. Every country was supposed to enhance its goals for cutting emissions through 2030. But it was clear weeks before delegates showed up in Scotland that wouldn’t happen. That means the heavy lifting will have to happen after Glasgow.

The run-up to COP26 revealed the flaws in the architecture of the Paris Agreement: failing to abide by past promises brings no penalty. Many of the world’s worst climate offenders, from China to Mexico, Brazil and Australia, did little to nothing to enhance emissions plans despite pressure to do so.

But the point of the Paris process is to cajole nations to do better over time as they come under pressure from other countries — and that dynamic was seen in Glasgow. A surprise deal between China and the United States yielded some proof. China agreed for the first time to account for emissions of methane, a potent greenhouse gas that China emits more of than any other country, and left open the possibility of reassessing how much planet-heating pollution it can cut — a concession some saw as significant.

“I hope this shows that even in a world where conflict and competition between nations, that this issue can bring people together,” Kerry said.

“We should meet each other halfway,” said China’s Vice Minister for the Environment Zhao Yingmin.

Beyond China, the final deal in Glasgow requested countries revisit and improve their climate plans next year in line with “the Paris Agreement temperature goal.” The problem is that the Paris Agreement has two goals — “well below” 2 degrees and 1.5 degrees. That woolly language left nations most vulnerable to climate change sour; they wanted annual check-ins until countries closed the gap this decade to keep the world on a 1.5-degree pace. That major emitting countries like China, India, Saudi Arabia, Indonesia and others agreed on any nearer review, however, was seen as a harbinger of progress toward narrowing the divide.

Those countries have already flagged that they believe the burden next year will need to be shared by rich countries, which sets up a battle with the U.S., EU, U.K. and others that have just been through the painful political process of raising their climate goals.

But a potential new model was shown in the first week of the conference — when countries agreed on a host of side-deals that formally fall outside the Paris process but which could move the needle on slowing global warming.

In one such agreement, France, Germany, the EU, U.S. and the U.K. struck a multibillion-dollar deal to reform South Africa’s coal power utility.

Countries also struck a flurry of voluntary commitments on private sector finance, methane, deforestation, getting rid of combustion engine cars, ending fossil fuel extraction and greening investment flows. Some of those were flops but others showed more promise. If — and it’s a big if — all of those pledges actually happen, it could put the world on a trajectory for 1.8 degrees of warming, the International Energy Agency projected in a rosy forecast. Another analysis was more grim: Climate Action Tracker warned the world is heading for 2.4 degrees of warming.

The difference between those two estimates is based on just how credible all the promises will be.

“We need commitments to turn concrete,” U.N. chief Guterres said. “We need actions to be verified. We need to bridge the deep and real credibility gap.”

Guterres said he would establish a group of experts to oversee the private sector commitments. He was especially critical of a group of firms with $1.3 trillion of assets under management convened by former Bank of England Governor Mark Carney that promised to align their investments to a 1.5-degree world.

The world is already 1.1 degrees warmer than in pre-industrial times, and that’s raised seas, sparked wildfires and threatened water availability for millions of people across the world. Those disasters disproportionately affect people in poorer nations, not responsible for the vast majority of greenhouse gases in the atmosphere.

How good delegates felt on Saturday night depended in part on where they were flying home to.

“I think it is without comparison the strongest text we’ve had at any end result of a climate conference,” said Per Bolund, environment minister of Sweden.

“We see progress across the board, but not enough,” said Kishan Kumarsingh, chief climate negotiator for Trinidad and Tobago.