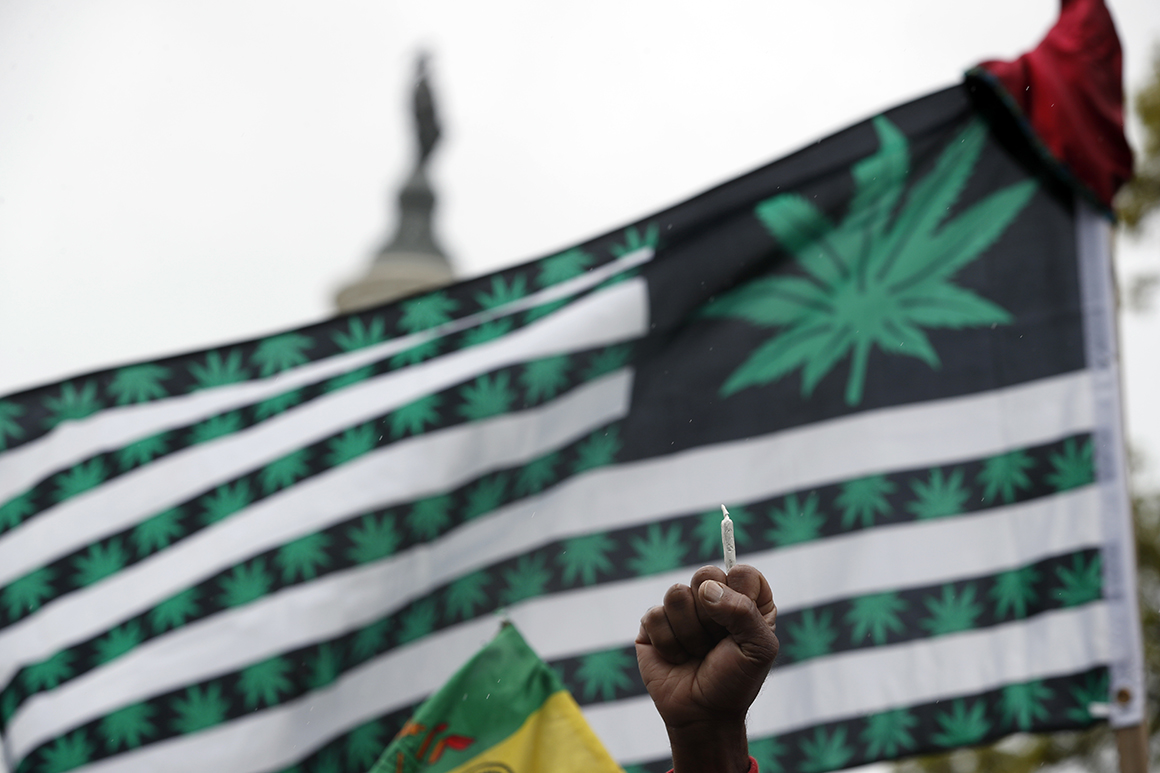 Republicans are warming to weed.

Nearly half of Republican voters support federally decriminalizing cannabis, and GOP lawmakers are now beginning to reflect their constituents’ view by increasingly supporting broad legalization at the state and federal level.

“We need the federal government just to get out of the way,” said Rep. Nancy Mace (R-S.C.), who introduced the first Republican bill in Congress to decriminalize marijuana this past week and pointed to more than 70 percent of Americans supporting the idea.

Stronger Republican involvement could hasten a snowball effect on Capitol Hill, where Democrats lead the charge on decriminalization but lack results. It could also chip away at Democrats’ ability to use cannabis legalization to excite progressives and younger voters as the midterms approach.

“When the culture becomes more accepting of something, even the most resistant groups get tugged along,” said Dan Judy, vice president of North Star Opinion Research, which focuses on Republican politics. “I don’t want to directly conflate marijuana legalization with something like gay marriage, but I think there’s a similar dynamic at play.”

As Republicans wade into the weed group chat, they are bringing their principles, constituents and special interest groups. When Mace introduced her bill on a freezing day on the House triangle, she was surrounded at the podium not by Drug Policy Alliance and the National Organization for the Reform of Marijuana Laws, but by veterans groups, medical marijuana parents, cannabis industry lobbyists and Koch-backed Americans For Prosperity.

Many GOP proposals include lower taxes and a less regulatory approach than Democratic-led bills, while often maintaining elements popular among most voters, like the expungement of nonviolent cannabis convictions.

“I tried to be very thoughtful about what I put in the bill that would appeal to Democrats and Republicans,” Mace said in an interview on Monday. “Which is why criminal justice reform is part of it. It’s why the excise tax is low.”

The motivations bringing Republicans to the table are also changing.

Former Capitol Hill cannabis advocates like Sen. Cory Gardner (R-Colo.) and Rep. Dana Rohrabacher (R-Calif.) advocated primarily for their state legalization programs, but Mace comes from South Carolina — a state with no medical or recreational cannabis program. She joins other GOP lawmakers who are pushing for federal policy to move beyond their own states — they include Reps. Matt Gaetz and Brian Mast of Florida, where only medical marijuana is legal, and libertarian-leaning Sen. Rand Paul of Kentucky, which does not yet have a medical program.

“Every two years, you get a new crop of members from both parties, but certainly from the Republican Party, who don’t have to defend the drug war … and they don’t have to prop it up,” said cannabis advocate and former Maryland GOP state delegate Don Murphy. “They are free to vote their conscience.”

Deep divisions remain within the Republican Party, however. After Mace announced her bill, the South Carolina GOP was quick to condemn it — saying they were “unequivocally” against Mace’s bill. “Since this will have widespread negative impacts, from rising crime, violence, and mental health issues in children, I think it’s a safe bet to say most Republicans will be against it too,” South Carolina GOP Chair Drew McKissick said in a statement.

Six in ten younger GOP voters — what Pew described as the “Ambivalent Right” in a recent report — believe marijuana should be legal for medical and recreational use, but older, educated Republicans and Christian conservatives do not feel the same way.

The GOP split came to a head over the past year in South Dakota. Fifty-four percent of voters approved a ballot measure that legalized recreational marijuana last November in a state where only 27 percent of voters were registered Democrats. Despite support from voters, South Dakota Gov. Kristi Noem — a rising Republican star — supported a court challenge that has tied up the legalization measure since its passage. But while the state waits on a court decision, efforts to legalize marijuana at the ballot box and in the legislature are moving forward in the meantime.

“[Support] is growing because the people voted it in,” said South Dakota Republican Rep. Hugh Bartels, who led the adult-use marijuana study subcommittee over the summer.

Marijuana advocates are gearing up now to put legalization initiatives on the 2022 ballot in deep red states like Missouri, Idaho and Wyoming. The fact that more GOP-leaning voters are supportive of marijuana reform means lawmakers are increasingly out of step with their constituents — a fact some in politics are catching on to.

“We’re now in a race,” Rep. Alexandria Ocasio-Cortez (D-N.Y.) said in an interview the week after the 2020 election. “If Republicans beat Democrats on marijuana legalization, they’re just one or two of those kinds of social issues away from totally just eroding a ton of goodwill [that Democrats are trying to build with voters].”

Republicans who support legalization are viewing the issue through the prism of states’ rights, personal freedom, job creation and tax revenue. Many libertarian-leaning Republicans are early supporters of cannabis policy reform, arguing that arresting people for using cannabis is a violation of personal liberties.

Some Republicans also cite the racial disparities in marijuana arrests as a reason to fix federal law — though Democrats focus more strongly on criminal justice reform on the whole. And, as is the case for Democrats, the shift is often generational: Texas Young Republicans announced they support marijuana decriminalization back in 2015.

The shift within the GOP at times is less about lawmakers’ own beliefs about marijuana and more about how much the public has shifted on the subject. Bill sponsors in North Dakota, for example, said they were personally opposed to marijuana, but introduced the bill anyways to head off the possibility of a ballot initiative that would legalize marijuana through the constitution — especially after South Dakota voters approved legalization in 2020.

Bartels himself is “not a real fan of marijuana,” but a draft legalization proposal is “going to get a good solid pitch from me” in the House next session, he said. He’s satisfied with how the draft bill handles his chief concerns of public safety and youth use. “It’s a regulation bill, not an industry-leaning bill,” he said.

A lack of motivation to fight cannabis legalization is also a major factor, Judy said. White, conservative evangelicals are one of the largest constituencies against legalization, for example — but most of them are not handing out pamphlets or going door to door campaigning against ballot measures.

“There’s definitely a strong sense in a lot of places that the train is leaving the station,” Judy said.

Marijuana reform is poised to make gains in red states now that so many blue states have already legalized it. Advocates are trying to place adult-use legalization initiatives on the 2022 ballot in Arkansas, Oklahoma and Missouri. Supporters in Wyoming and Idaho are collecting signatures for medical marijuana and decriminalization measures after state lawmakers have punted on the issue.

And one big benefit stands out for Republicans when and where they decide to move forward with legalization: they can tax and regulate the industry in their own way.

In Washington, though Republicans have taken some big steps recently, they do not have control of either house of Congress. Democrats are likely to continue to focus on moving Senate Majority Leader Chuck Schumer’s decriminalization bill, which has a high tax rate and social equity grant programs that deter conservatives.

But Republicans are one step closer to reaching a compromise with Democrats on the issue — if Democrats are willing to negotiate. Leaders such as Steve Hawkins, president of the U.S. Cannabis Council, hope that Mace’s bill will broaden the pool of support.

“This is an issue where there’s not a ton of partisan division,” Judy said. “In this day and age, to find any issues with majority bipartisan support is like finding a unicorn.”